Which Language Is Useful for NLP and Why? 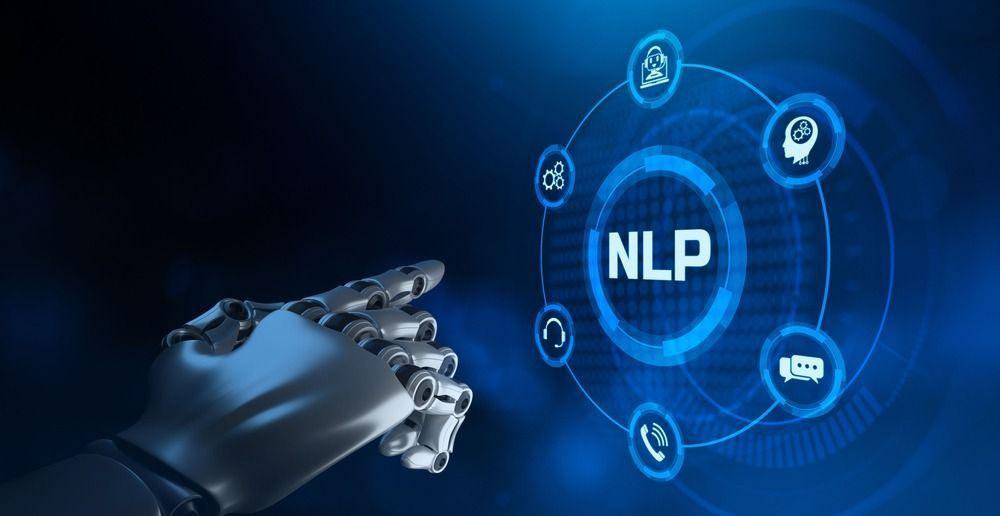 Natural language processing or NLP sits at the intersection of artificial intelligence and data science. It is all about programming machines and software to understand human language. While there are several programming languages that can be used for NLP, Python often emerges as a favorite. In this article, we’ll look at why Python is a preferred choice for NLP as well as the different Python libraries used. We will also touch on some of the other programming languages employed in NLP.

Why Python for NLP?

There seems to be a lot of hype around NLP these days - and for good reason. It offers a wide spectrum of solutions and valuable insights that address language-related issues faced by customers. Today, tech giants like Facebook, Google, and Amazon are investing millions of dollars in NLP to power their virtual assistants, recommendation engines, product portals, chatbots, and other services enabled by NLP.

In the past, NLP projects were accessible only to experts who knew processing algorithms, machine learning, linguistics, mathematics, etc. Now, developers can leverage the ready-to-use tools and environment that streamline text processing and focus more on building better NLP projects. Python and its libraries and tools are especially suitable for solving specific NLP issues.

Here are some of the reasons why Python is one of the best choices for natural language processing projects: 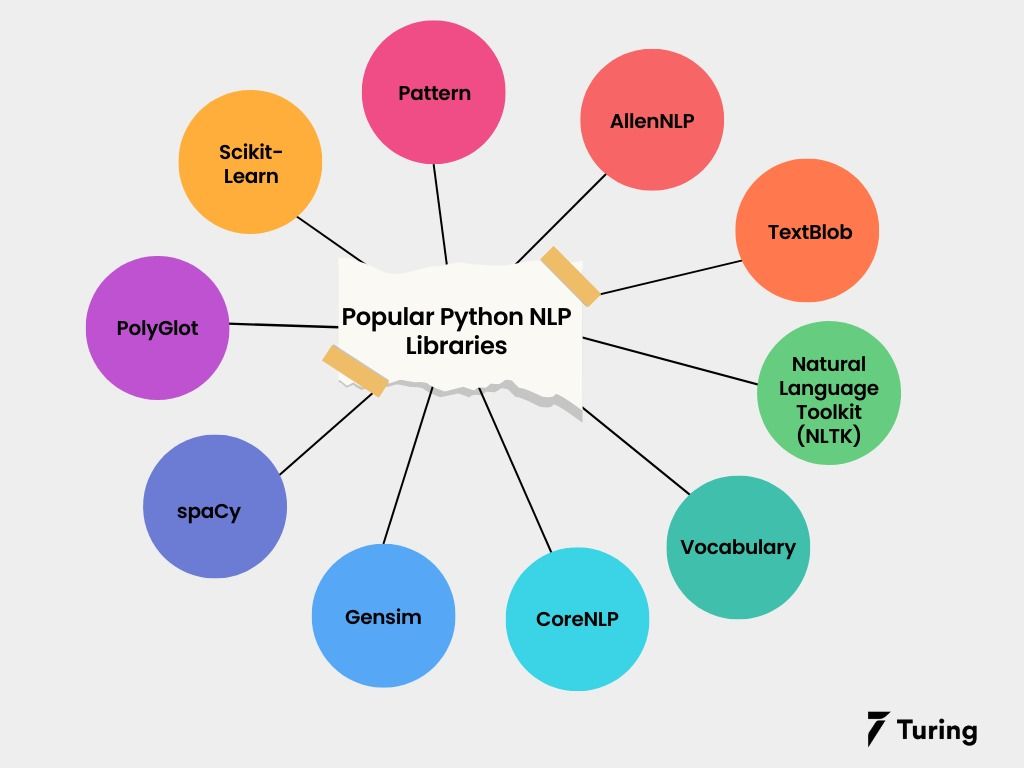 Developed by Edward Loper and Steven Bird, NLTK is a powerful library that supports tasks and operations such as classification, parsing, tagging, semantic reasoning, tokenization and stemming in Python. It is one of the main tools for natural language processing in Python and serves as a strong foundation for Python developers who work on NLP and ML projects.

The library is quite powerful and versatile but can be a little difficult to leverage for natural language processing. It is a little slow and does not match the requirements of the fast-paced production processes. The learning curve is also steep. Despite these drawbacks, however, Python developers can access the help files and utilities to learn more about the concepts.

TextBlob is a necessary library for developers who are starting their natural language processing journey in Python. It offers all the basic assistance and interface to developers and helps them learn basic NLP operations like POS tagging, phrase extraction, sentiment analysis, and more.

Beginners looking to take their first steps toward NLP in Python would do well to use TextBlob as it is helpful in designing prototypes. There is one caveat, however; it has inherited a flaw of NLTK - its slowness in processing the requirements of natural language processing production.

Written in Java, CoreNLP was developed at Stanford University. It supports several languages including Python and is useful for developers who want to start natural language processing in Python. The library operates very fast and developers can leverage it for the product development environment. What’s more, a few core components of CoreNLP can be integrated with NLTK for better efficiency.

Gensim is a powerful library that deals with identifying the semantic similarities between two documents through the topic modeling and vector space modeling toolkit. It can handle large text compilation with the help of incremental algorithms and data streaming.

Gensim’s ability to tackle large text compilation is superior to the other packages that only target in-memory and batch processing. The unique features of this library are its processing speed and incredible memory usage optimization which are achieved with the help of NumPy. Apart from the advanced features, the vector space modeling capability is state-of-the-art.

spaCy is relatively young. It is designed for production usage and provides access to larger word vectors. It offers the fastest parsing in the market. Since it is written in Cython, it is efficient and is among the fastest libraries.

Although spaCy supports a small number of languages, the growing popularity of machine learning, artificial intelligence, and natural language processing enables it to act as a key library. This means it is bound to support more languages in the near future.

PolyGlot is a lesser-known Python library, but we have mentioned it in this list as it provides a huge language cover and deep analysis. With the help of NumPy, Polyglot works fast and is pretty similar to spaCy. The library streamlines the use of a dedicated command line through pipeline mechanisms. It also supports multiple programming languages.

Many experts choose PolyGlot owing to its scope of expansion in analysis and great language inclusion. It is a superb choice for projects that don’t uphold spaCy.

Here are some interesting features and figures of PolyGlot:

scikit-learn is a handy Python library that provides developers with a wide range of algorithms to build ML models and other processes. It also offers several other functions for creating special features to tackle classification problems. The main USP of this Python library is the intuitive class feature. It also has excellent documentation to help developers make the most of its features.

An important point to note is that scikit-learn does not use neural networks for text processing, so you should use other NLP libraries and then return to it to build ML models.

Pattern is one of the most powerful and widely used libraries that can be employed for a wide range of natural language projects. It streamlines the following:

Pattern enables you to leverage a web crawler, DOM parser, and a few useful APIs.

AllenNLP is one of the most advanced tools of natural language processing and is ideal for businesses and research applications. This deep learning library for NLP is built on libraries and PyTorch tools and is easy to utilize, unlike some other NLP tools. It makes use of spaCy for ‌data preprocessing.

AllenNLP offers incredible assistance in the development of a model from scratch and also supports experiment management and evaluation. From quickly prototyping a model to easily managing experiments involving many parameters, it leaves no stone unturned to help you make the entire process fast and efficient. You can also investigate client response and purpose with AllenNLP which are fundamental for client service and item advancement.

Vocabulary is a typical dictionary for NLP in Python. It can take any word and get its synonyms‌, meaning, antonyms, pronunciations, and much more. It also returns the value in simple JSON objects, as the value is returned normally for Python lists and dictionaries. From its easy installation to speed and simplicity, everything is notable about vocabulary.

The Python libraries discussed here enable you to streamline all your work in natural language processing in Python. However, there are a few other languages you can leverage to achieve the same. Let’s discuss them and their libraries. 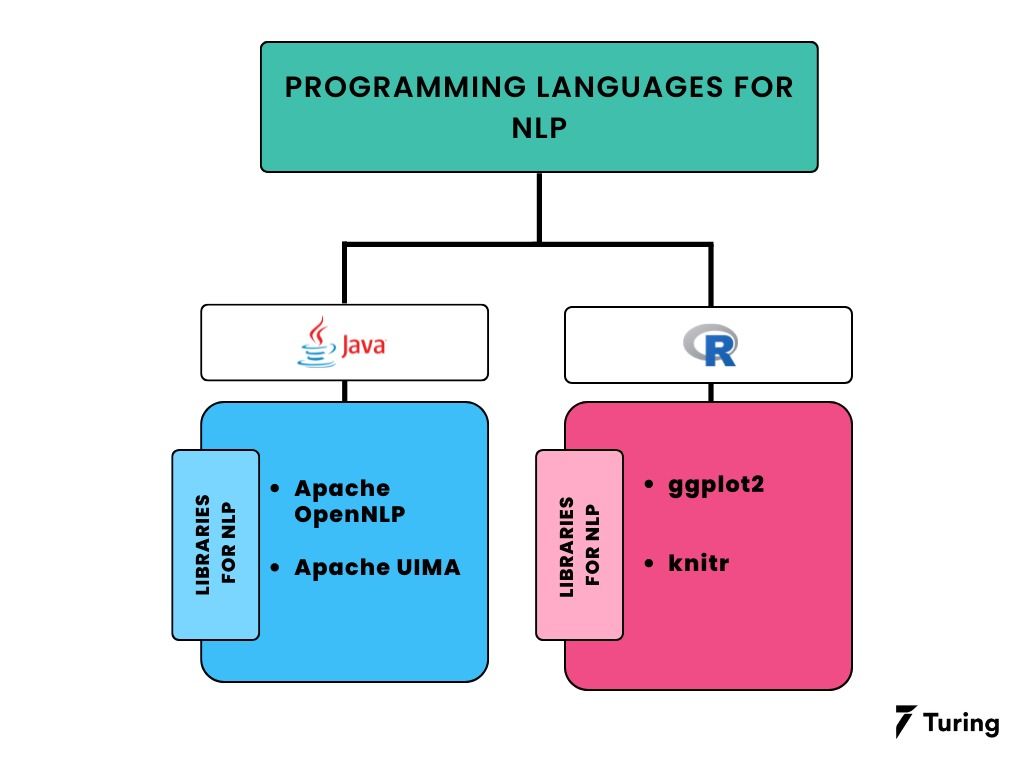 Java is a powerful programming language used in natural language processing. It allows you to explore different fields including:

Java is a platform-independent language and processes information quickly and easily. Here are the top two libraries you can use for NLP projects.

This is a powerful open-source NLP Java library that serves as a learning-based toolkit for processing natural language text. It includes the components mentioned below which streamline the NLP pipeline building operations:

You can use Apache OpenNLP to perform these tasks:

Unstructured Information Management Applications or UIMA is written in C++ and Java. Developed by IBM, OASIS, and Apache Software Foundation, it offers a powerful architecture for software framework implementation.

Apache UIMA converts unstructured data into structured information by streamlining the analysis engine that detects the entities to bridge the gap between them. It also has multiple features to wrap components as network services.

Although R is popular in the field of statistical learning, it is also used for natural language processing. It plays an important role in big data investigation and is useful when it comes to learning analytics.

Here are the top two R libraries you can use for NLP projects:

ggplot2 is a widely used R library for data visualization projects. It follows the ‘grammar of graphics’ approach for generating visualizations by highlighting the relationships between the graphical representation of data and their attributes.

knitr generates dynamic reports in R. It allows dynamic research by implementing literate programming. It enables the integration of R code into HTML, Markdown, and other structured documents.

Although languages such as Java and R are used for natural language processing, Python is favored, thanks to its numerous libraries, simple syntax, and its ability to easily integrate with other programming languages. Developers eager to explore NLP would do well to do so with Python as it reduces the learning curve.

Most developers lean towards building AI-based chatbots in Python...

What Are the Applications of Quantum NLP for Translation?

Quantum NLP (natural language processing) is a relatively new use of quantum...

Why use Python for natural language processing (NLP)?

The transparent semantics and syntax of Python make it an excellent choice for natural language programming operations. Moreover, developers enjoy excellent integration support with other languages and tools that come in handy for complex ML projects.

What is natural language processing (NLP)? Why is this important?

Natural language processing is the ability of a computer to interpret human language in its original form. It is of vital importance in artificial intelligence as it takes real-world input in fields like medical research, business intelligence, etc., to analyze and offer outputs.

Which NLP languages are the easiest to learn?

Python is the easiest to learn. Although there are other NLP languages available, Python trumps as it is the only language that enables you to perform complex NLP operations in the easiest way possible.

In which areas can NLP be useful?

What language is best for NLP?

Experts recommend Python as one of the best languages for NLP as well as for machine learning and neural network connections.

How to implement NLP techniques?

Using Python, NLP techniques can be implemented in just a few lines of codes, thanks to open-source libraries like NLTK and spaCy.