Today, most computer science courses teach Python because it’s one of the easiest programming languages to learn. Hugely popular, especially among beginners, Python has various applications in the field of data science, natural language processing, deep learning, and software engineering.

Programmers value Python for its general-purpose functionality. And in spite of not being around for a really long time, this open-source language has advanced into an effective, readable language intended to smooth out the web development process.

This growth has taken Python to multiple versions, including the two most recent, Python 2.0 and Python 3.0.

Although both Pythons are just different versions of the same programming language, there are noticeable differences between them.

Before delving into these differences, let’s look at the history of Python.

Dutch programmer Guido van Rossum designed Python in 1991. He completed his Master’s degree in Mathematics and Computer Science from the University of Amsterdam in 1982 and joined Centrum Wiskunde & Informatica (CWI) as a researcher in the same year. CWI is a research center in the field of mathematics and theoretical computer science.

Prior to Python, there was already a well-established language called SETL (SET Language), a high-level programming language based on the concepts of set theory in mathematics. It appeared in 1969 and was developed at New York University.

Another language called ABC - influenced by SETL - was developed at CWI with Rossum part of the project. After a few years working on it, he learned the ins and outs of how to design his own language, how to make an interpreter, etc.

Rossum realized that there were many things he could improve upon in ABC, and decided to develop his own language. A big fan of the British comedy series, Monty Python’s Flying Circus, he decided to name his language ‘Python’.

Python’s aim was to make code readable and to express concepts in far fewer lines of code. Once it was released, it was regularly updated with new features and support. There have been many updates to Python versions since then, beginning from 1994 to the current release. 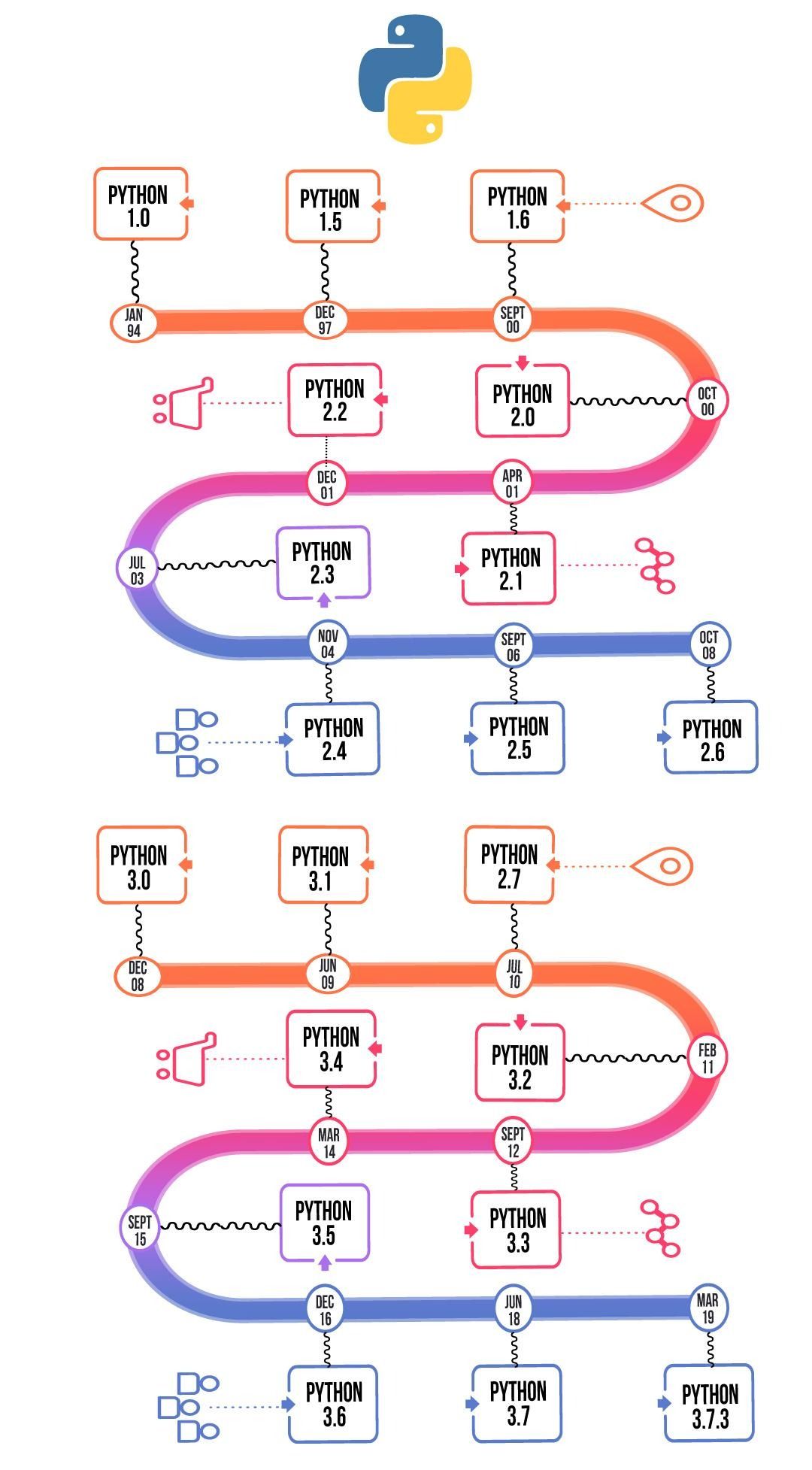 An overview of Python 2

Python 2.0 was released in 2000 and was created by the BeOpen PythonLabs team. Prior to this, Rossum was in charge of most of the changes and the debugging of Python. However, he wanted it to be readable and its role to be more inclusive in order to spread coding literacy.

With that in mind, the BeOpen PythonLabs team released Python 2.X with the expectation of opening it up to community improvements, as opposed to being under Rossum’s jurisdiction.

An overview of Python 3

Python 3 was released in 2008 and was developed to fix the problems faced with Python 2. It completely changed the language into one with backward-incompatibility, meaning it only supports new versions that come after it.

The purpose of the Python 3 syntax was to inhibit unnecessary or repeated code – code that essentially does the same tasks in different ways. For beginners, this immediately discards the main issues that occur when learning a programming language. 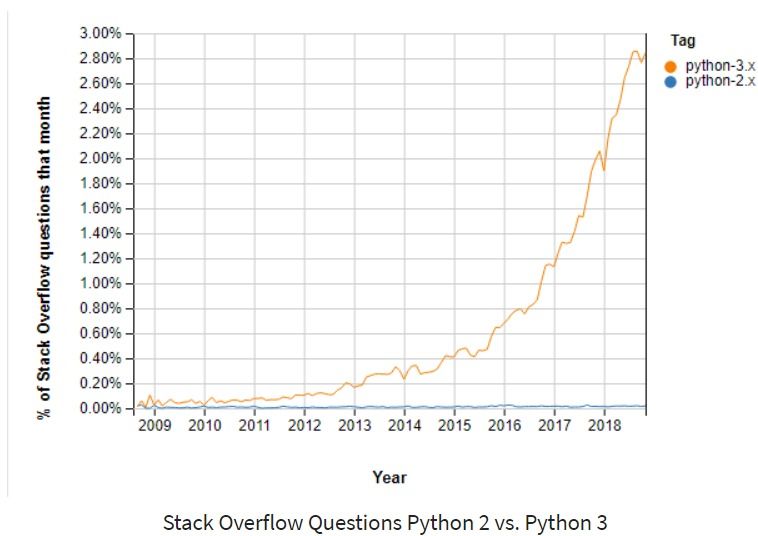 Now that we have a solid understanding of the history and major versions of Python, here’s a look at the key differences between them.

When working with Python 2, we don’t need to use parentheses to print a statement, although we can if we want to. This sometimes creates confusion because most of the functions in Python require arguments to be placed in parentheses.

In contrast, Python 3 explicitly treats ‘print’ as a function. It will only print a sentence if it is inside parentheses, otherwise it will return a syntax error.

When we divide two integers in Python 2, the answer is always an integer. Why? Because Python 2 treats numbers that we type without any digits after the decimal point as integers.

Suppose we want to divide 3/2 in Python 2, the result would be 1, which is the round-off value to the nearest whole number. On the other hand, in Python 3, dividing two integers gives a floating-point value, which is more advantageous for new programmers. Here, 3/2 will produce 1.5 as the output.

In Python 3, the syntax will be:
raise IOError(“enter your error message”)

In older versions of Python, giving the variable that is iterated over in a list comprehension the same name as a global variable could lead to the value of the global variable being changed. This bug has been fixed in Python 3.

We can use a variable name that we have already used for the control variable in our list comprehension without worrying about the values in the variables in the rest of the code.

Apart from this, there are many libraries that are created in Python 3 which are to be strictly used with Python 3. This means that they won’t be compatible with Python 2.

A summary of Python 2.X and Python 3.X

Either version of Python enables you to write useful and efficient code, so there is no need to worry too much about which version you should learn as a beginner. However, it’s important to know the key differences between them in case you need to write code in a version that you aren’t too familiar with.

The transition from Python 2 to Python 3 is happening slowly, but it is in progress. Python 3 is the future and many developers have already started creating libraries that are strictly compatible only with Python 3. As time passes and new updates to Python 3 are released, the proportion of programmers using it, instead of Python 2, will definitely increase.

Guide on How to Prepare for AWS Certifications Exam This Year

Looking around, you are bound to find almost everyone trying to get hands-on experience in cloud computing today. It is truly...