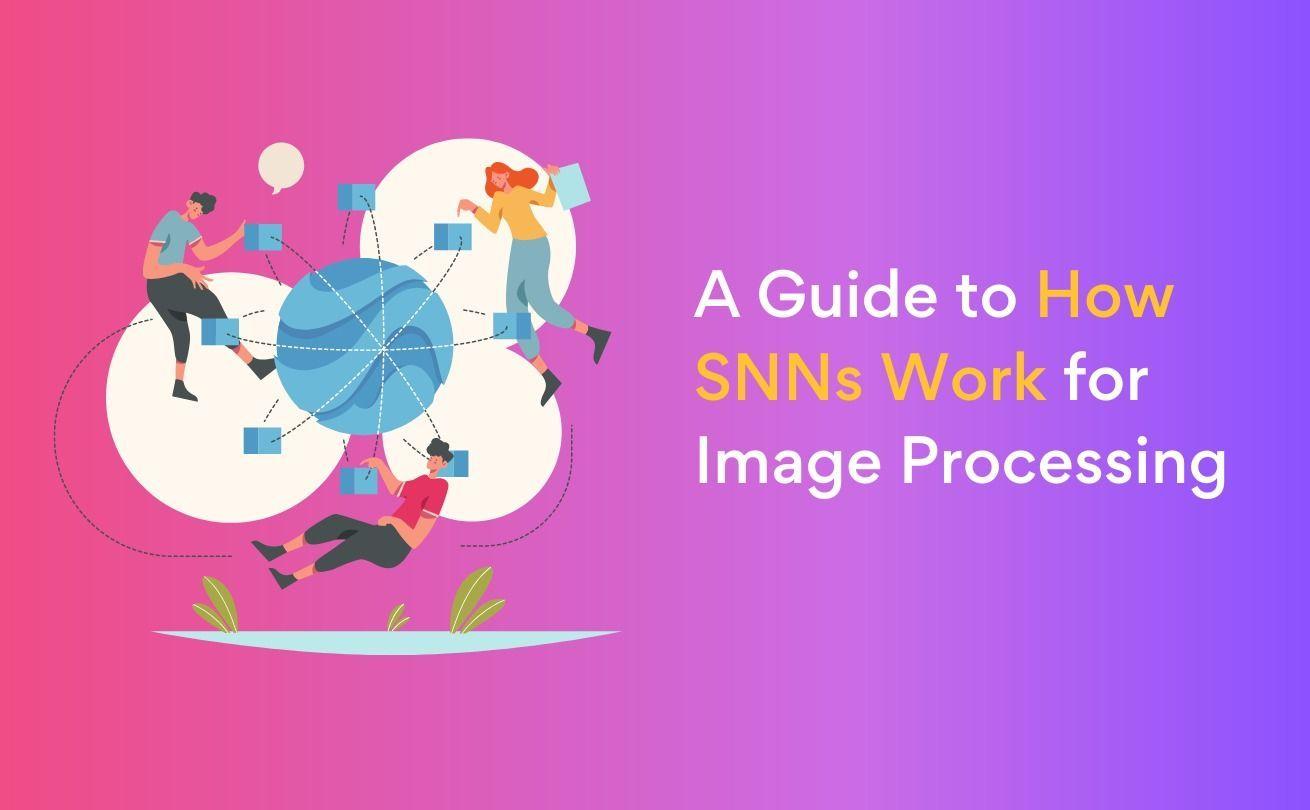 Neural networks can be used for virtually any task, provided there is data. But for certain others, such as image processing for signature verification or facial recognition, we cannot rely on obtaining and processing more data. To solve these issues, we need to have a novel form of neural network architecture known as Siamese neural networks (SNNs). This article will examine how SNNs work and how they can be trained for image processing.

What is a Siamese network?

A Siamese network is capable of using just a few images to get near-precise predictions. The capacity to learn from minute data has made it popular in the field of data science.

A Siamese neural network is a category of neural network architecture that features two or more undistinguishable sub-networks. This means that they contain an identical configuration of weights and parameters.

Parameter updating is reflected across subnetworks and is usually used to detect relationships between inputs by contrasting their feature vectors.

Normally, a neural network is built to learn how to predict multiple classes. But this can be problematic when we want to remove or add new classes to our data. The only way out is to update the network and retrain it again on the entire dataset. To make matters even more difficult, we need a huge dataset to train for deep neural networks. However, SNN learns a similarity function which enables it to ascertain if two images are identical. This process allows us to classify new data classes without the need to retrain the neural network. 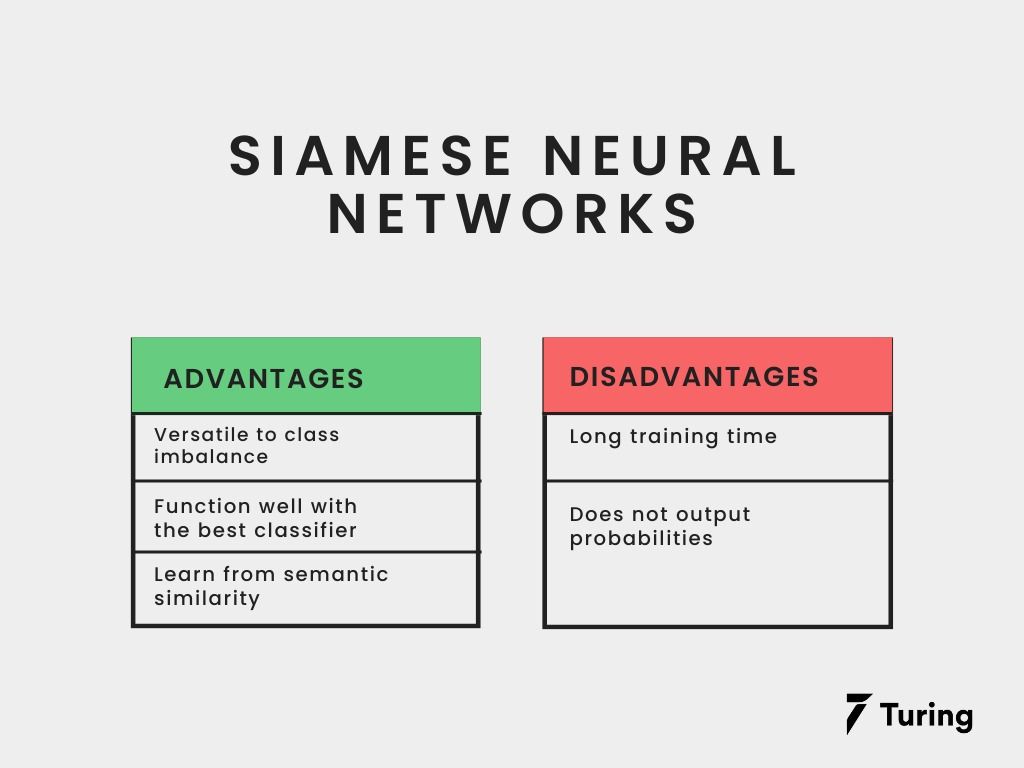 The following are the benefits and drawbacks of Siamese neural networks:

One-shot learning enables the subnetworks to be more efficient with fewer images for every class.

SNNs’ learning mechanism is a little different from other classification models. But averaging it with a particular classifier is better than averaging two interrelated supervised models.

One of the biggest advantages of using SNN is its ability to learn from semantic similarity. This neural network learns the relative positioning of embeddings to group similar objects together.

For all their features and benefits, SNNs also have several downsides.

Perhaps the biggest drawback of Siamese neural networks is that they require more time to train compared to normal neural networks. This is because SNNs learn by comparing pairs of items/images which leads to more time consumption.

SNNs learn by pairwise comparison of the items/images to find similarities. Thus, the prediction too is based on this comparison and not on probabilities like other learning models.

Siamese neural networks cannot use the standard loss functions like other models since they learn by comparison and finding similarities. The two main types of loss functions used are triplet loss and contrastive loss.

This is the mathematical representation of triplet loss. Here the term α is used to “extend” the distance between the triplet pairs. f(A), f(P), and f(N) are feature embeddings of anchor, positive, and negative images.

Training a Siamese neural network to work on images 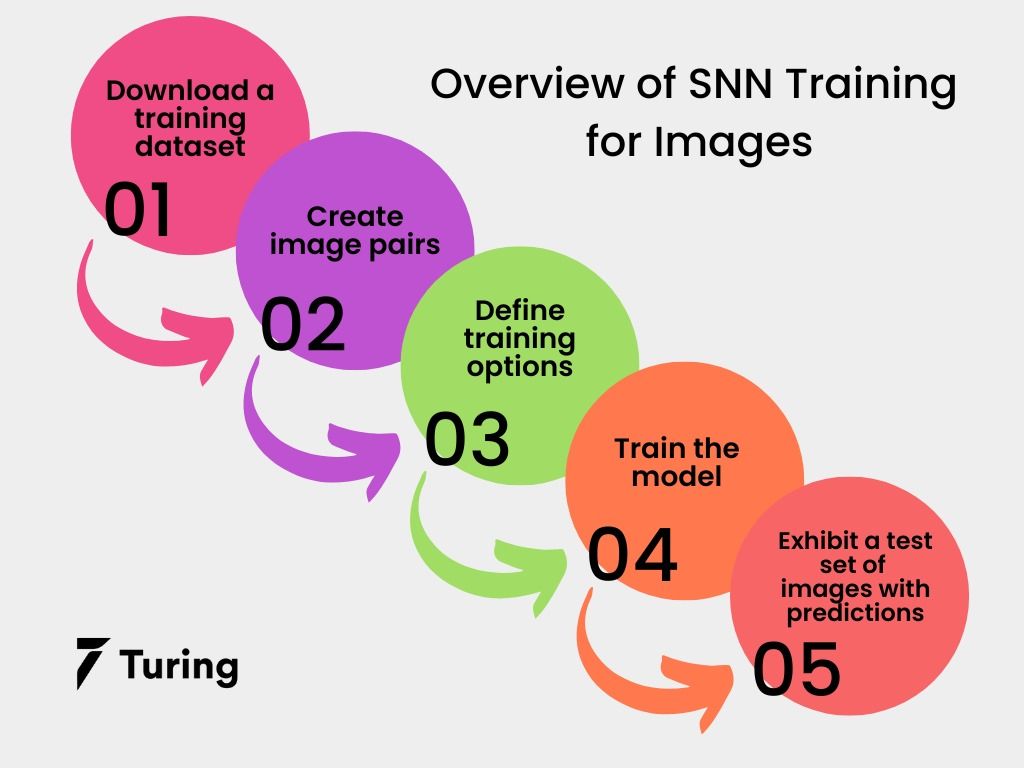 Next, we'll look at how to train an SNN with two similar subnetworks with the same unique structure, weights, and parameters. As mentioned, SNNs are generally utilized in operations involving finding similarity or dissimilarity between two items.

SNNs are often useful when there are multiple classes but only a few observations of each. As a result, there is inadequate data to train a conventional neural network to categorize these photos into classes. With SNNs, this lack of data is no issue when classifying images into their respective categories.

We will use the Omniglot dataset to train an SNN to compare a set of photos. The dataset contains 1623 handwritten characters for 50 alphabets, divided into a 30:20 ratio for training and testing. Each character is also written by 20 different people hired on Amazon’s Mechanical Turk. In this article, we will train our network to identify whether two characters are of the same alphabet or not.

After downloading the dataset, we use the function imageDatastore to load the images, and then manually set the image labels by parsing the file names.

Our test set contains black and white handwritten letters from 30 alphabets and 20 observations for every letter. The images are sized 105x105x1 with pixel values ranging from 0 to 1.

We’ll use the getSiameseBatch method to generate random pairs of the same or different alphabets. These pairs are denoted by Pair1 and Pair2. If the pairs are of the same alphabet, pair_label is set to 1, else 0.

We will create a sample of five image pairs.

Two pictures must go via one of two comparable subnetworks with equal weights in order for the network to compare them. The subnetworks transform the 105x105x1 pictures into 4096-dimensional vectors throughout this procedure.

The 4096-dimensional representations of images will be the same for those in the same class. As a result, the subnetworks' output feature vectors are combined by subtractions before being processed with a fullyconnect function that only produces one output. The Siamese neural network prediction of whether the pair of pictures are similar or different is then shown using a sigmoid function which turns this output to odd values between 0 and 1.

The network is updated during the course of the training using the binary cross-entropy loss between the true label and the network prediction.

Here is the resulting code.

We use the modelLoss function to output the loss values as well as the gradients of the loss. The function takes the fullyconnect function parameter structure, the Siamese subnetwork network, and a batch of input datasets X1 and X2 along with their labels operation, pair_labels.

SNN aims to identify the difference between input X1 and X2. The network output is a probability ranging from 0 to 1, with 1 being completely same, and 0 being no similarity.

Define the options used for training. In this case, to train for 10000 iterations as shown below:

To initialize the training process, plot using the code below:

To train the model, we use a traditional training loop to loop over the dataset while updating the network parameters after each iteration.

Step 6: Exhibit a test set of images with predictions

Next, we generate a sample set of picture pairings to experiment with to see if the SNN accurately predicted similar and different photos. To determine the prediction for each test pair, we utilize the function predictSiamese.

We output the picture pairings together with the predictions, probabilities, and a label designating whether or not the network correctly predicted them.

Here is an example:

The Siamese network will compare the images to predict their similarity, despite the fact that all the images used in the test were not in the training data.

In this article, we applied similarity learning using SNNs to compare different scripts from the Omniglot dataset. There are numerous applications for this, ranging from facial recognition to signature comparison. Since the amount of data necessary to train such networks is also quite small, SNNs are a very viable paradigm with huge potential in the future.

Artificial intelligence is a very popular term and its recent development and advancements...

What Is the Necessity of Bias in Neural Networks?

How to Reduce Bias in Artificial Intelligence

It may take years to eradicate human bias, but preventing bias in AI isn’t a daunting task...

How Does a Recommendation Engine Work With Predicting Likes?

An automated recommendation engine suggests products and services to users based on...

How does a Siamese network work?

Siamese networks are made up of two identical neural networks, each of which takes one of the two input images. The last layers of the two networks are then sent into a contrastive loss function which computes the degree of similarity between the two images.

What is a Siamese network used for?

Siamese networks are used to apply similarity learning, i.e., to find where there’s a similarity of patterns and structures in two images.

What is a Siamese convolutional neural network?