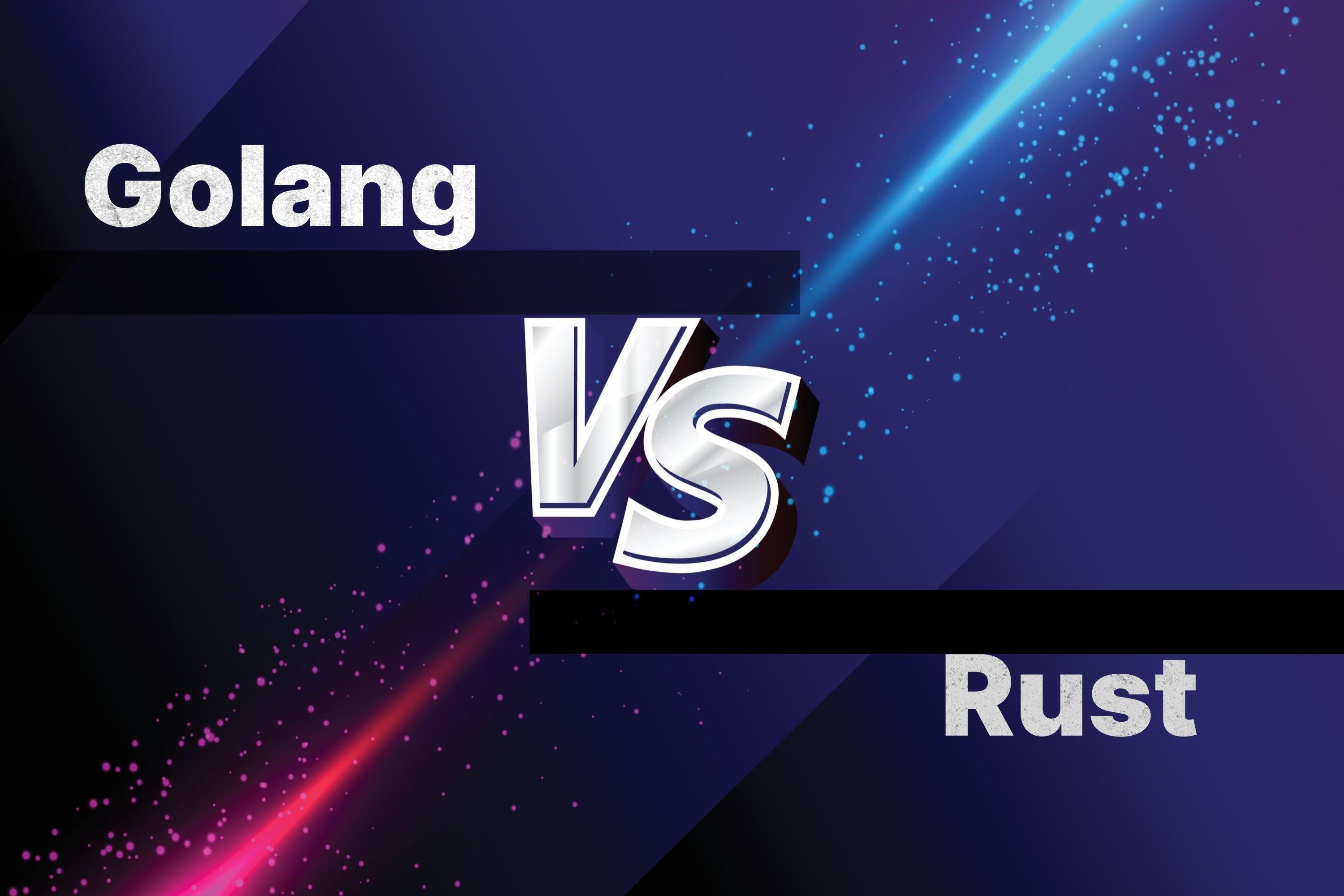 When it comes to web development, which programming language to choose is a question that most budding developers might often ask themselves. Although the answer mostly depends on the client's requirement, there are so many aspects you should consider when choosing the language. As a developer, you have to be more careful about choosing the language to get most of the job done. Because some languages might end up making your website slow loading rather than fast and well-programmed. There is always a debate about Go vs Rust. Which language is better for web development. Let's find out which language is better for web development. Go or Rust?

- What Is Rust language?

- Side by side comparison of Go vs Rust

One of the biggest trends in the software developer's community is web development. People want to build applications, online services and websites of all types. Before delving deeper into the comparison, let’s discuss about the two languages.

Go vs Rust: What is Golang?

The Go programming language was designed by Google engineers who wanted a language that provided the efficiency of C++ but was easier to learn, write, read, and deploy.

Go's creators drew inspiration from C++ and tried to make a language that had the advantages of other languages, but did not have its cons.

Go combines the benefits of languages such as C (static typing and runtime), Python, and JavaScript (simplicity).

StackOverflow developer survey results indicate that the Go language has become one of the most popular and desired languages in the development community in the last decade. Companies like Google, Uber, Twitch, Dailymotion, and Dropbox use Go language for their app.

Golang was designed by Google engineers, so they use this language for their internal projects. Google Chrome and Google Earth are the most prominent examples of the Go language.

Go vs Rust: Benefits of Go for web development

- Go language for web development: Go comes with many inbuilt features and tools. Here are the most compelling reasons to choose Go for your next project.

- Scalability: Developers can use Golang to build highly scalable applications. These applications are easily developed and highly performant out of the box. Golang has inbuilt HTTP/2 support. Apart from this, Golang also supports MySQL, Elasticsearch, and MongoDB. Golang has robust compatibility with various databases.

- Platform Independent: As Golang is a compiled language, web applications built with it can run on any platform. It can be the cloud or any operating system. Golang web applications run natively on Google App Engine and Google Cloud Run.

- Say no to third-party libraries: Thanks to the Golang creator and community, there is no external web framework used for Go language web development. They have built many tools that are natively supported by the Golang core. Consequently, there is no need for external libraries. With tools such as HTTP, JSON, HTML, etc, you can create API services without having to use additional libraries.

Over the years, the Go language community has created multiple frameworks for web development such as Martini, Gin Gonic, Beego, Net/HTTP and more.

Go vs Rust: What is Rust language?

While working for Mozilla Research, Graydon Hoare designed Rust, a compiled, statically-typed programming language. This language is open-source and has a similar syntax to C++.

This system language, extending the concepts of other system languages like C++, provides guaranteed memory security (no crashes, no data races). According to Stack Overflow, Rust has become the top choice of most developers, with a popularity of more than 86%.

Many companies in their tech stacks prefer Rust to other languages. It helps with memory management and application performance. So, companies like Figma, Cloudflare, Discord, and Amazon for their Web Services, among others, use Rust's features.

Go vs Rust: Benefits of Rust for web development

Rust is packed with many features that web developers absolutely love to use. The following are the top reasons to choose Rust for your next project:

- A solution to Memory Management Problem: The majority of system programming involves low-level memory control, and C's manual memory management can make this task a real nightmare.
Because it doesn't need a garbage collector to run continuously in the background, Rust offers unmatched convenience on low-level details. It has direct access to hardware and memory.

- Fast and High Performance: Rust has a performance on par with C++ and is faster than languages such as Python due to its lack of garbage collection. Rust does not have runtime checking, and the compiler catches erroneous code right away. This prevents erroneous code from spreading and destroying your system.

Go vs Rust: Side by side comparison 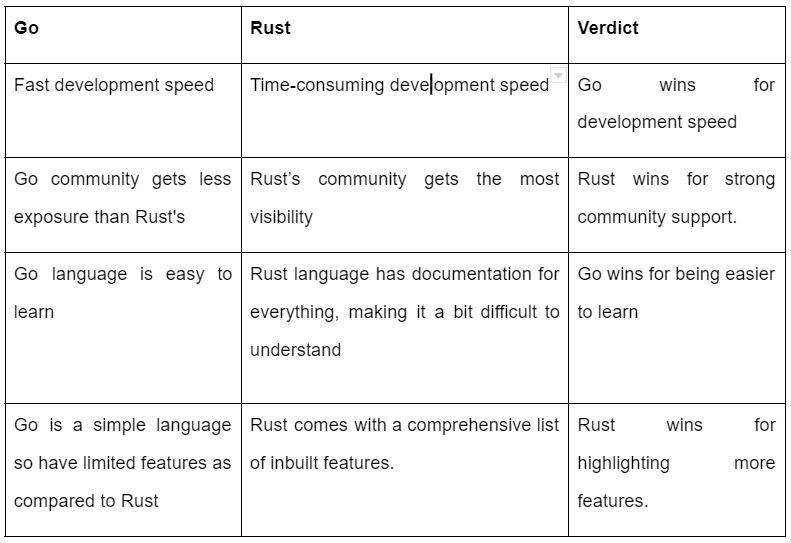 Here are some details about the features.

In both Go and Rust, performance measures are prized possessions. Since they are novel languages, it's imperative that they not only perform well but perform better than their predecessors. While the two languages do appear to be faster than others, the question now is how do they compare? In a multitude of tasks, Rust is faster than Go in a simple benchmark test.

In general, open-source languages tend to have strong communities of support. Community members play a very significant role in helping newbies learn a language's features and how to make the most of it. However, measuring a community's support is not easy. However, many bloggers never fail to praise Rust's strong community, which is a positive indication of its robustness.

- Go vs Rust: Ease to understand

The readability of Go makes it easy to learn, so coding should be easy. Rust introduces revolutionary concepts like borrowing and ownership. However, make the language more difficult to understand. Rust also has a vertical learning curve, and it's not afraid to admit that.

What's the most suitable choice for your next project? Go vs Rust, that is the question. However, there isn't a single correct answer to it.

The truth is that both languages might be a suitable fit, depending on your purpose and needs. The most effective approach to evaluate the language you want to use is to list its pros and cons (by using the right tool you can do this easier) and then select the one that outweighs the other.

While Rust and Go are both popular, modern, widely-used languages and neither are going away anytime soon, they do not compete against each other.

They have different use cases. In terms of speed, Rust comes out on top for applications with massive volumes of data, while Go's building speed makes it a great fit for enterprise-level applications and large development teams.

At the end of the day, you will have to decide which language is right for your needs.

Softmax activation function or normalized exponential function is a generalization of the logistic function that turns a vector of K...

How to Build Middleware for Node.js: A Complete Guide

Node.js is a popular web application framework that offers easy scalability of functions and features. It also offers an easy-to-learn...