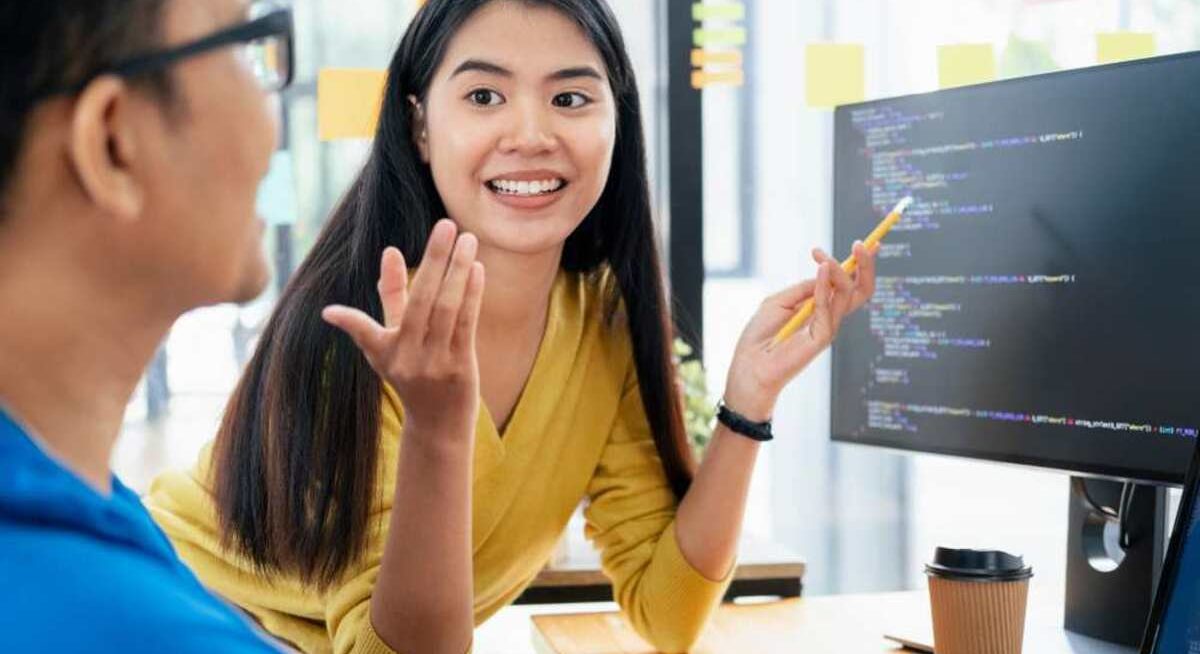 Node.js vs. Golang: Which One’s Best for You?

Two of the most popular back-end development tools are Go (Golang) and Node JS. Both are new and are growing in popularity, but in very distinct ways and for very different reasons. They are part of a shift away from backend development using standard server-side languages (PHP, Java).

So, let’s figure out which technology is suitable for your project. How do you tell which of the two next-generation web app development languages, Go (Golang) vs Node.js, is the winner? Read this comparison of Node.js and Golang, in which we assess both the technologies and provide an answer to this question.

This is where the differences between Node JS and Go truly shine.

One of Golang’s best qualities is its speed and memory management. These only come second to low-level languages like C and Rust. Golang programs thrive on a robust yet minimalist structure thanks to their memory management capabilities like garbage collectors and native goroutines.

Golang is pre-compiled to machine code; that’s why it has a faster startup and compile time. On the other hand, JavaScript is dynamically typed and interpreted, taking longer to execute.

Node JS has its strengths too. It borrowed a non-blocking and asynchronous architecture from JavaScript, allowing tiny activities to run in the background without interfering with the main thread. An important feature since it only supports one thread. For this reason, Node JS manages to come off as a multi-threaded language while only doing one action at a time. 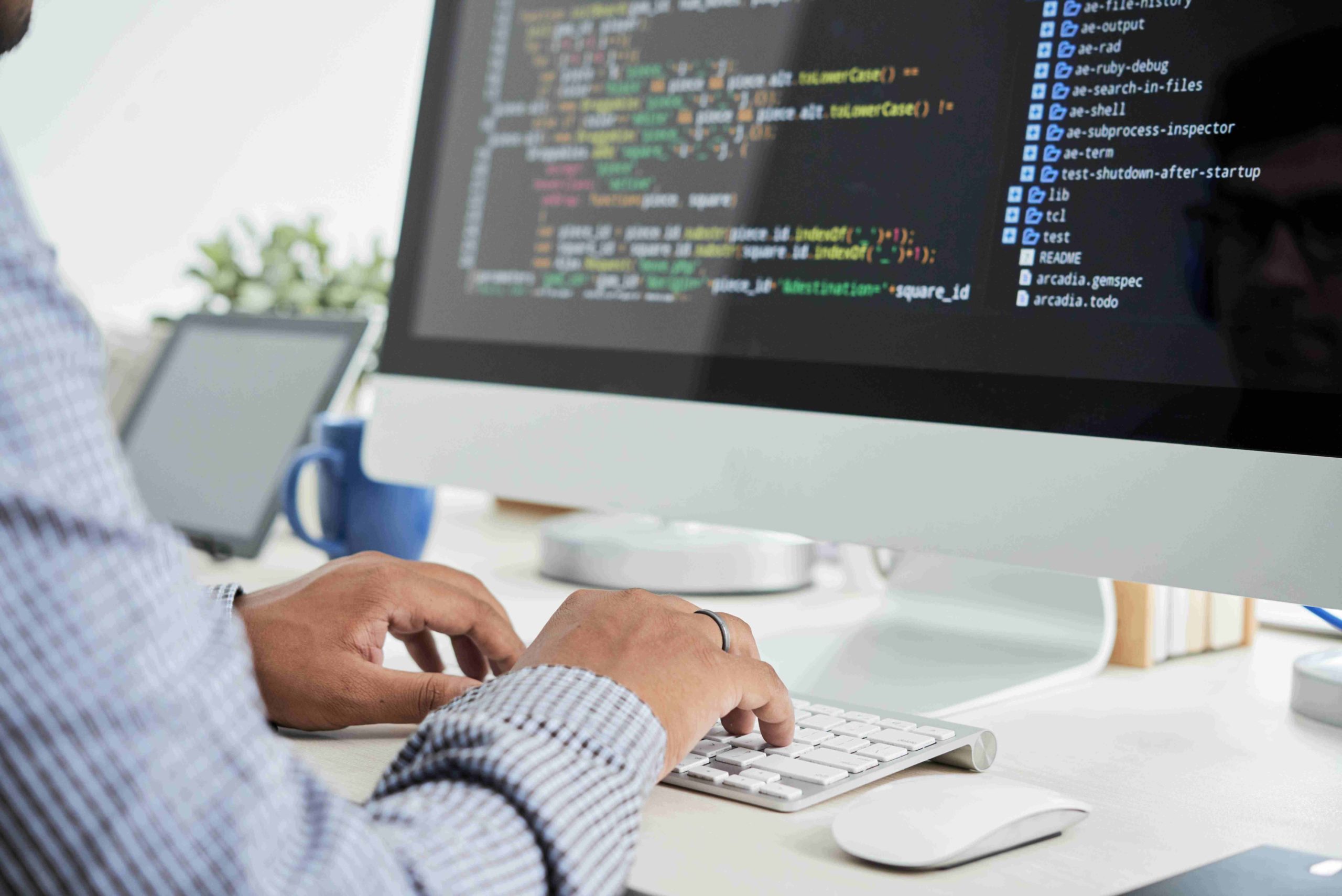 Both Node and Golang stake their claims in this space.

With an event-based framework, microservices architecture, and strong reusability, Node JS was created to provide an environment where JavaScript could build front-end and back-end web servers in one place. In addition, with 800,000 tools or “building blocks” dedicated to web development, NPM, the Node JS package manager, is the show-stopper of the whole operation.

However, navigating these barriers is tough because one can quickly publish an NPM package, making it impossible to find a reliable tool.

Similarly, Node JS struggles when it comes to high computational demands. Node JS incorporates JavaScript, a front-end language, into a back-end runtime environment. Even though Node JS has implemented measures to improve its single-thread nature, large queries can still consume the CPU and slow down processing time.

Golang, on the other hand, was designed for large network servers and complex computations that Node JS just cannot handle. Moreover, it’s concurrent, so it doesn’t have to cut corners to run numerous processes simultaneously, making enterprise applications more efficient.

While Go may not have 800,000 blocks, it offers great capabilities like go fmt, Go doc, go mod, and go run, which allow developers to build entire web servers without using any other frameworks or third-party services.

Go is also compiled into a single static binary, allowing users to dump it wherever they need it. In contrast, the Node JS interpreter must be installed on workstations for JavaScript to run.

The bottom line: Golang is preferable for large-scale back-end web development. It provides more flexibility and reliability when it comes to developing web servers. However, if you want to run small projects or generate front-end code bundles, Node JS may be a better choice.

Node JS is single-threaded, which implies that it executes the instructions one after the other. And this could be its Achilles’ heel when it comes to huge applications that require tremendous scale and a high number of concurrent processes. Event callbacks in JavaScript do allow for some concurrency, although they aren’t very useful.

Golang, on the other hand, is more suited for scalability thanks to its coroutines, which it refers to as ‘goroutines.’ Goroutines allow many threads to run simultaneously. This allows parallel activities to be completed quickly and reliably. So, in this round of Golang vs. Node JS, Go comes out on top.

Because of its simple and convenient scalability, Golang became the language of choice for Docker and Dropbox developers, who saw the possibilities Golang provided for building large applications with significant scaling capacity.

In terms of error handling, Golang necessitates explicit error checks while the program runs normally and returns error codes afterward. This method may appear tough at first, but it assures greater consistency and reliability in the end.

Node JS employs the throw/catch system, with mistakes being ‘caught’ as soon as they occur. This method is typical of the error handling that many programmers are familiar with. So in terms of familiarity and ease of use, Node JS races ahead.

Node.js vs. Golang: A Brief Summary 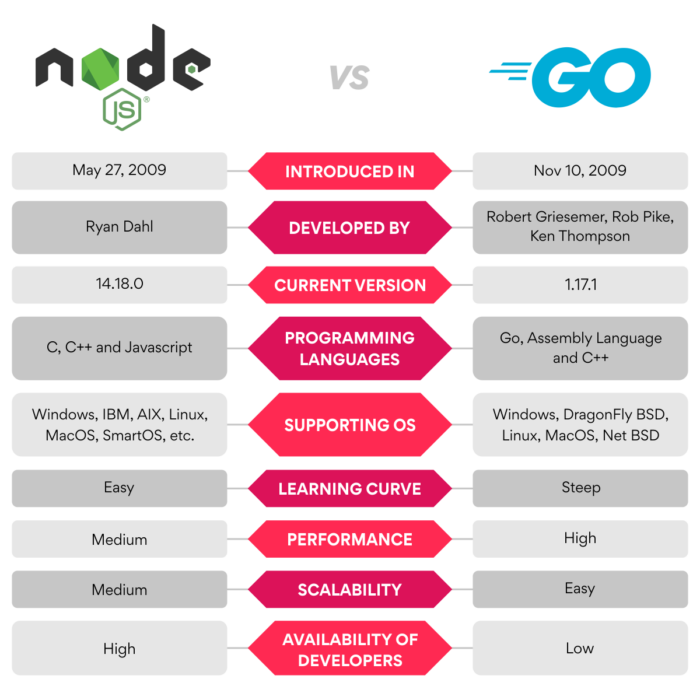 Node.js vs. Golang: The Final Verdict

It’s challenging to place one tool over the other after comparing Golang and Node JS from various perspectives. Both have their advantages and disadvantages. Before making the final call, you should examine the size of your project, its structure, and the type of development process that best suits your company goals.

But remember, no matter which back-end tool you employ, the best results can only come from an expert Node JS developer or a Golang developer.

Enter Turing. Turing’s automated platform lets companies “push a button” to hire senior, pre-vetted remote software developers. You can access a talent pool of the top 1% of 1M+ developers with strong technical and communication skills who work in their time zone. There’s no risk. Turing offers a free two-week trial period to make sure your developers deliver to your standards.

Article Name
Node.js vs Golang: Battle Of The Best Back-end Tools
Description
Golang beats Node in performance but Node’s learning curve is smoother than Golang. So, which tool should you use? In this blog, we evaluate and answer this question.
Author
Ankit Sahu
Ankit Sahu
Ankit is a writer and editor who has contributed his expertise to Govt of India, Reebok, Abbott, TimesPro, Chitale Bandhu, InsideAIML, Kolte Patil Dev., etc.
Related Blog Posts
Comments