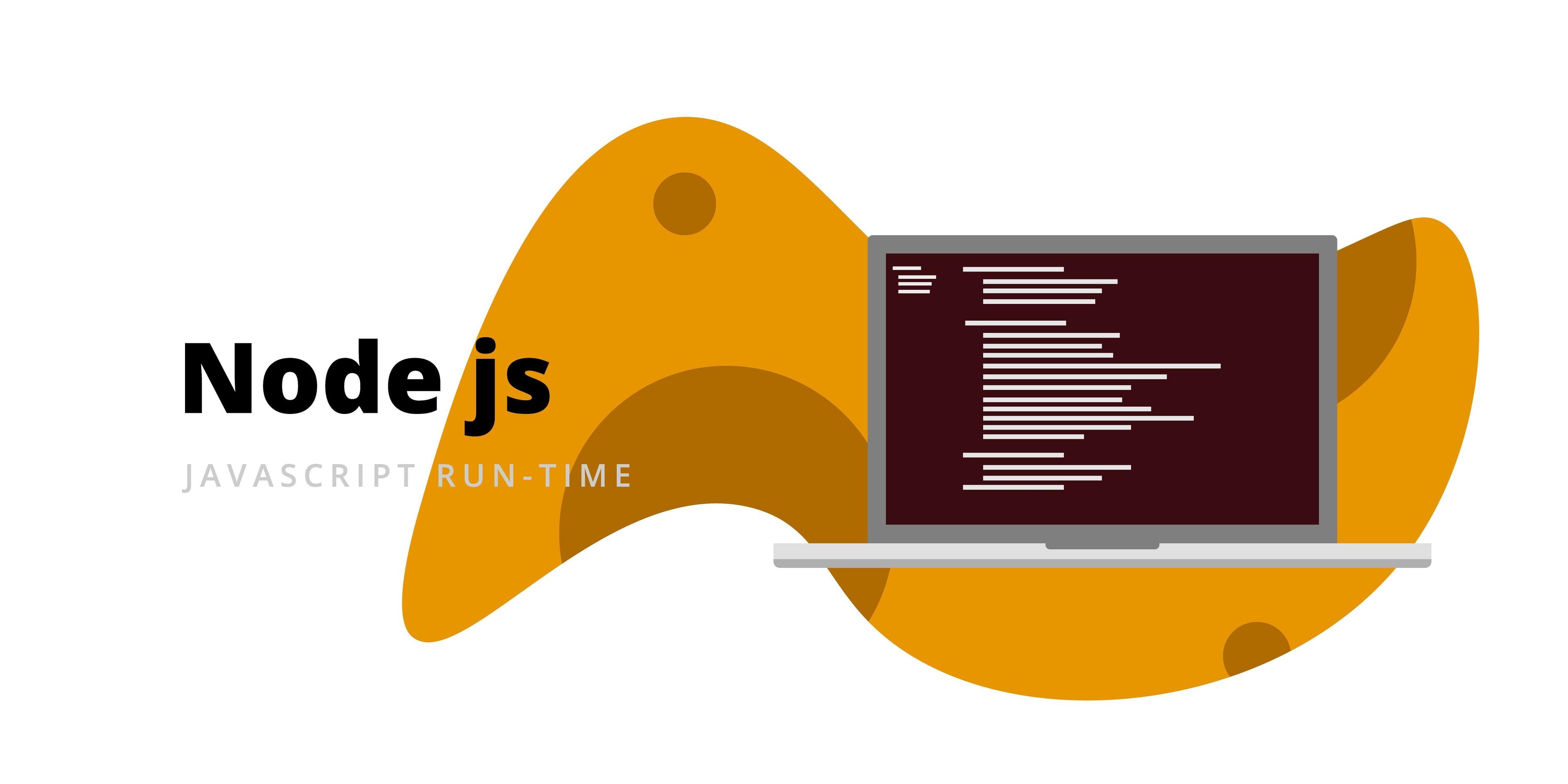 NodeJS is a single-threaded and asynchronous runtime environment used to run server-side applications with JavaScript as its primary language. NodeJS offers a robust architecture that provides seamless operation to run server-side code.

The NodeJS runs an input/output model which involves reading and writing or manipulating files and returning data from and to the disk, HTTP requests, and also interacting with the database.

NodeJS also uses modules to run a lightweight environment which means that modules are imported at runtime to improve efficiency and reduce bloating.

The NodeJS is a single-threaded environment which means that it runs one action at a time and runs its operations smoothly with the use of events and event emitters.

Events are actions that instruct the runtime what needs to be completed at a given time period with particular data. The event emitters are response objects that can be subscribed to and acted upon to perform certain operations.

Event emitters, like the WebSocket, create a connection and emit events based on certain predetermined events that accept a callback. The Node system adds events to a queue (batch) where events and processes are added that are resolved in an order and eventually removed from this queue.

This structure creates a robust system and enables it to perform one task at a time with an amazing speed.

The input/output model is a concept used in Node runtime which accepts inputs that includes reading and writing files to disk, communicating with the servers, https request, and security protocols among other concepts which are supported by libuv. The I/O method is used to work on data inputs and outputs with the use of callbacks, referred to as handlers, which inject data to these callbacks.

The input/output provides lots of helpers like the filereader, socket, http request/response among several other methods. The Node documentation provides a brilliant implementation of the various methods available.

Its default asynchronous code will be:

The asynchronous operation always uses callbacks to resolve its operations.

The ECMAScript has really improved on these technologies with the implementation of various methods like async/await and promises among other methods. Asynchronous code is prioritized in NodeJS architecture as it helps to provide a seamless operation without blocking the whole code and also by reducing lag.

All methods in the runtime are run asynchronously to aid a smooth implementation that doesn’t seem obvious for the single-threaded operation.

There are various design patterns employed to make NodeJS a scalable environment, some of these patterns are beyond the scope of this article. However, NodeJS made some concepts immersing and easy to use, for example, the microservices, singleton.

PHP uses this approach a lot, where it contains the interface like the frontend app, its data fetching logic, and other parts all in one place. This has its advantages as it can be easy to understand the process used in creating the app but it brings in a bottleneck where restructuring code can be a really herculean task.

The microservice moves away from this concept as it delicately provides its different logic in bits where each software logic is separated from the other and is only applied wherever needed. This logic provides a structure that is easy to understand and follow.

The microservice patterns are loosely coupled and can be easily refactored when needed. The Angular framework also popularized this pattern with its use of services for supplying data which is then subscribed to in other parts that it is needed. These kinds of applications can easily be traversed and explained to someone new to the codebase.

The concept of the singleton is about initializing a variable in an application only once. This was derived as a result of some variables that we want to be evaluated only once in the application flow and not reinitialize or change form. A good example is fetching an API. On declaration, we only want to declare the instance once and not change its value while fetching

According to the NodeJS official guide, the event loop is what allows Node.JS to perform non-blocking I/O operations — despite the fact that JavaScript is single-threaded — by offloading operations to the system kernel whenever possible.

This process of single threading cannot be possible without the event loop. When an operation starts in the runtime, it employs the event loop, which helps to batch the operation of different tasks with methods like timers, polls, callbacks, and other methods. These methods are referred to as phase which uses the FIFO (First In First Out) technique to run operations smoothly.

The phase methods are explained below:

1. Timers - This is a phase that uses a callback with timers as a threshold to decide when the operation should run, like the 'setInterval()' and 'setTimeout()'.

2. Pending callbacks - These are callbacks that are left pending to be resumed at a later time.

3. Polls - This is a queue for retrieving events.

4. Checks - This is a method for allowing an operation to run immediately with the 'setImmediate()' method.

5. Close callbacks - This is a method for closing open callbacks.

A very good example of this concept is fetching data from the database and these kinds of operations can run asynchronously. In a situation where this operation needs 1s to run, another operation can also run through and then resume back to the database operation after 1s to save time.

NodeJS employs the use of core modules in its runtime environment. The Node runtime has global methods as well as modules. The global methods are the likes of 'setTimeout()', 'process.nextTick()' among others.

However, Node splits core concepts into modules that are not shipped by default like the http server module has to be imported or required before usage. This helps to improve the environment by shipping unnecessary modules and helps to keep the size at a minimal level. 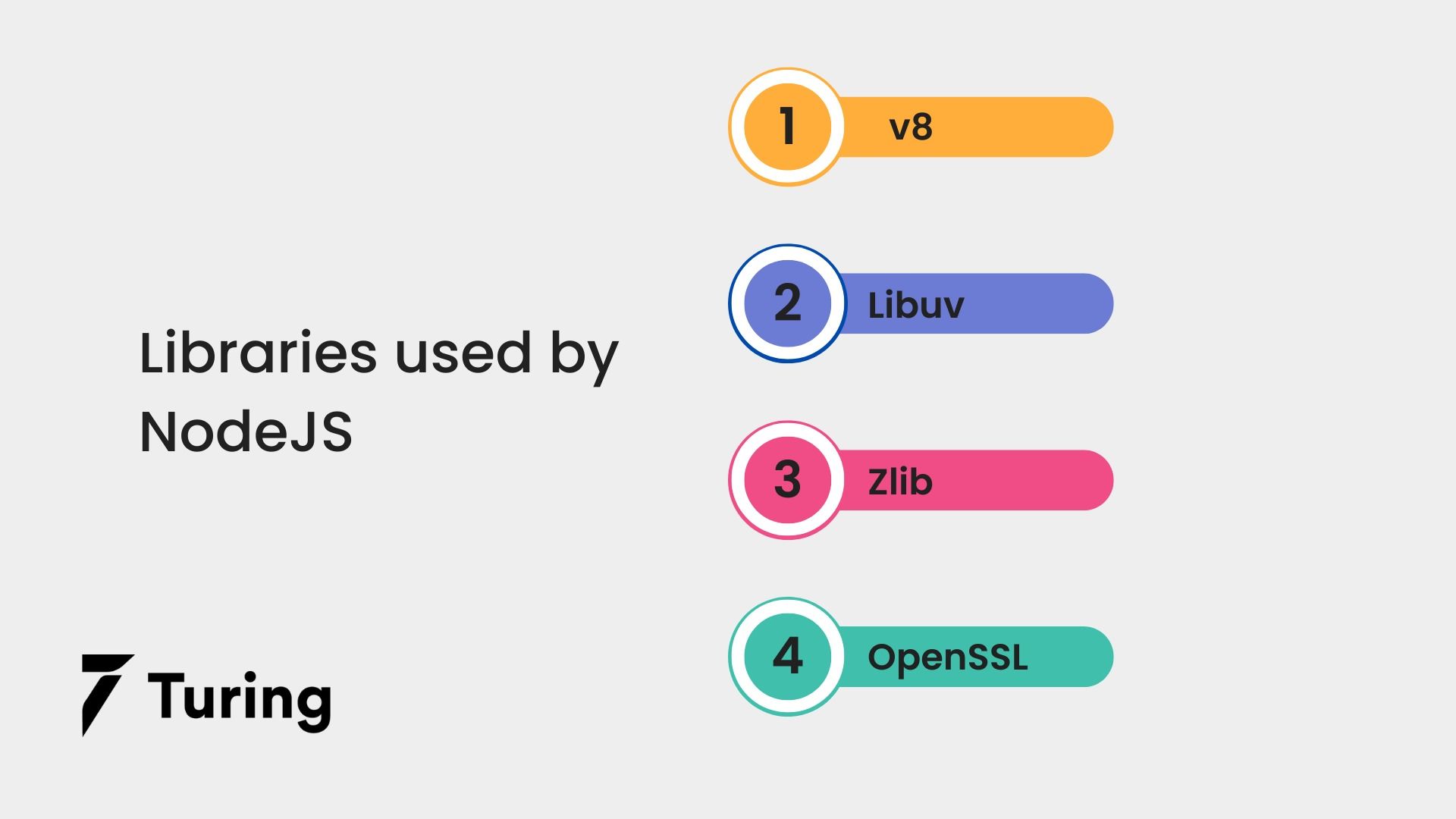 Node uses a couple of libraries to run. A few of those libraries include:

1. v8 - Node uses the v8 JavaScript engine under the hood to run its various tasks. The v8 engine is a JavaScript open-source engine that is maintained by Google and it is written in C++. Node uses this engine with the C++ API.

2. Libuv - This is another core implementation used by Node to run its environment. It is a C library used to abstract non-blocking I/O operations. This library maintains its disk operation interface like the file system, DNS, child processes, signal handling, and streaming among other concepts.

4. OpenSSL - This is used in tls and crypto modules to provide cryptographic functions to improve its security.

NPM is a registry that contains different dependencies and modules available to use in NodeJS. The NPM is widely accepted as it is also used in frontend libraries to frameworks, especially like Angular and Vue.

NPM keeps track of a project dependency with the use of 'package.json' which states the various dependencies and modules available in a project and its version.

Running 'npm install' automatically installs packages in the package.json not yet available in the file and also tries to update available files if needed.

1. Security - The safety and security of an application cannot be over-emphasized. It is important to know that clients are not at any risk of using your application. Node implements this concept with its use of SSL/TSL, secure https, web crypto API, and others.

2. Scalability - Node applications are easily scalable and can also be easily refactored with the use of microservices and other concepts. Node is also continuously adding the latest features to improve its runtime and features.

3. Speed - Due to its asynchronous nature and single threading, Node applications running time is fast by default and offers mind-blowing performances. These are all for the advantage of clients as clients are likely to revisit if they perceive a web application as fast.

NodeJS offers an impressive list of different features that makes working with it a breeze. Little wonder it is so popular now with its core implementations and use of different libraries and has also been largely adopted by different organizations, thereby, creating a plethora of NodeJS developer job opportunities. The NodeJS architecture displays a well-thought-out process aimed at improving the developer experience and seamless services.

There is no shortage of languages available for web development. Hundreds of them are used...

When comparing Node.js vs Ruby on Rails, there are plenty of things to bear in mind...

What is NodeJS architecture?

NodeJS architecture is the different facets and thought processes that make up the application including the different features it added to run efficiently like the v8 engine, and microservices among others.

What are the libraries used by Node?

Node uses different libraries including openSSL, v8, libuv, and others. It uses this implementation to perform various herculean tasks and it maintains its single threading platform.

The I/O stands for input/ output which refers to the reading and writing of files to disk and communicating with servers among other features.

What design patterns are used in NodeJS?

Node uses different design patterns, some of them are:

What is the event loop?

The event loop allows NodeJS to perform non-blocking I/O operations — despite the fact that JavaScript is single-threaded — by offloading operations to the system kernel whenever possible.

How do I create a microservice in NodeJS?

A microservice as explained earlier is the process of breaking an application into small chunks. In the instance of creating an eCommerce application, we will need to connect to a database resource, this will be created as a service by creating 'db.js'.