Top 10 Python Tools Every Developer Should Know in 2023 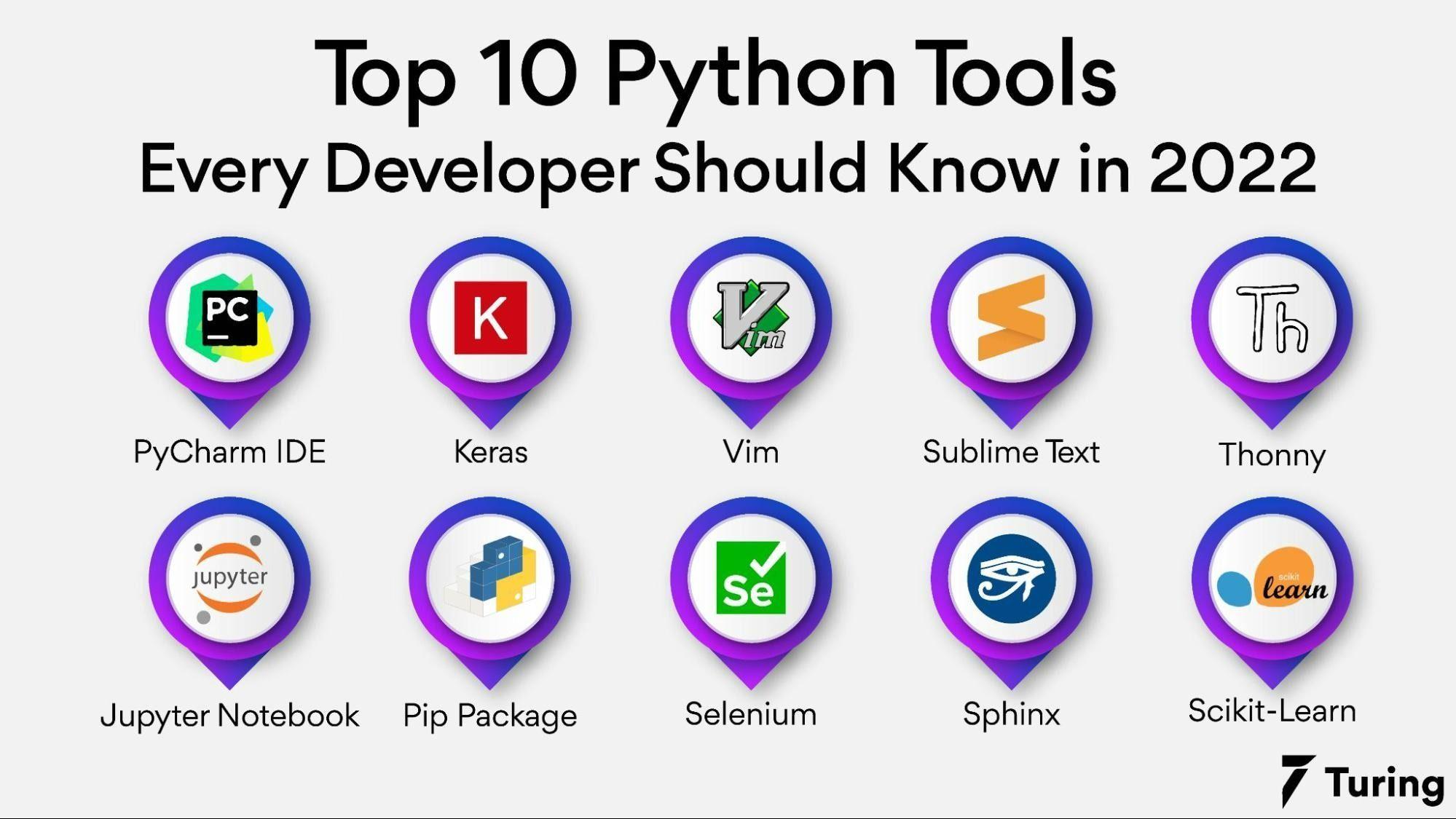 As Python is a general purpose language, it can create a variety of programs without being restricted to any specific use-case. However, it is the Python tools that make it easy for developers to use Python for maximum benefit.

So, if you are looking to become a Python developer in 2022, here are some of the best Python development tools, libraries, and Integrated Development Environments (IDEs) for your reference. While each Python IDE or code editor is unique with regard to features, user interface and multiple other parameters; we are listing the ones most used by the Python developer community.

PyCharm is one of the best Python tools. It is an IDE with a smart code editor, navigation, intuitive auto-completion, a powerful debugger, a GUI-based test runner, and more. Besides, it also supports intelligent automated code refactoring, testing assistance, and code inspections.

The IDE holds a few built-in databases and developer tools for debugging and profiling. And, all this integrates well with Visual Studio. Apart from this, it also has good support for JavaScript, TypeScript, HTML, CSS, CoffeeScript, and other modern-day technologies.

To stretch its scientific computation features, one can integrate the NumPy and Matplotlib library. 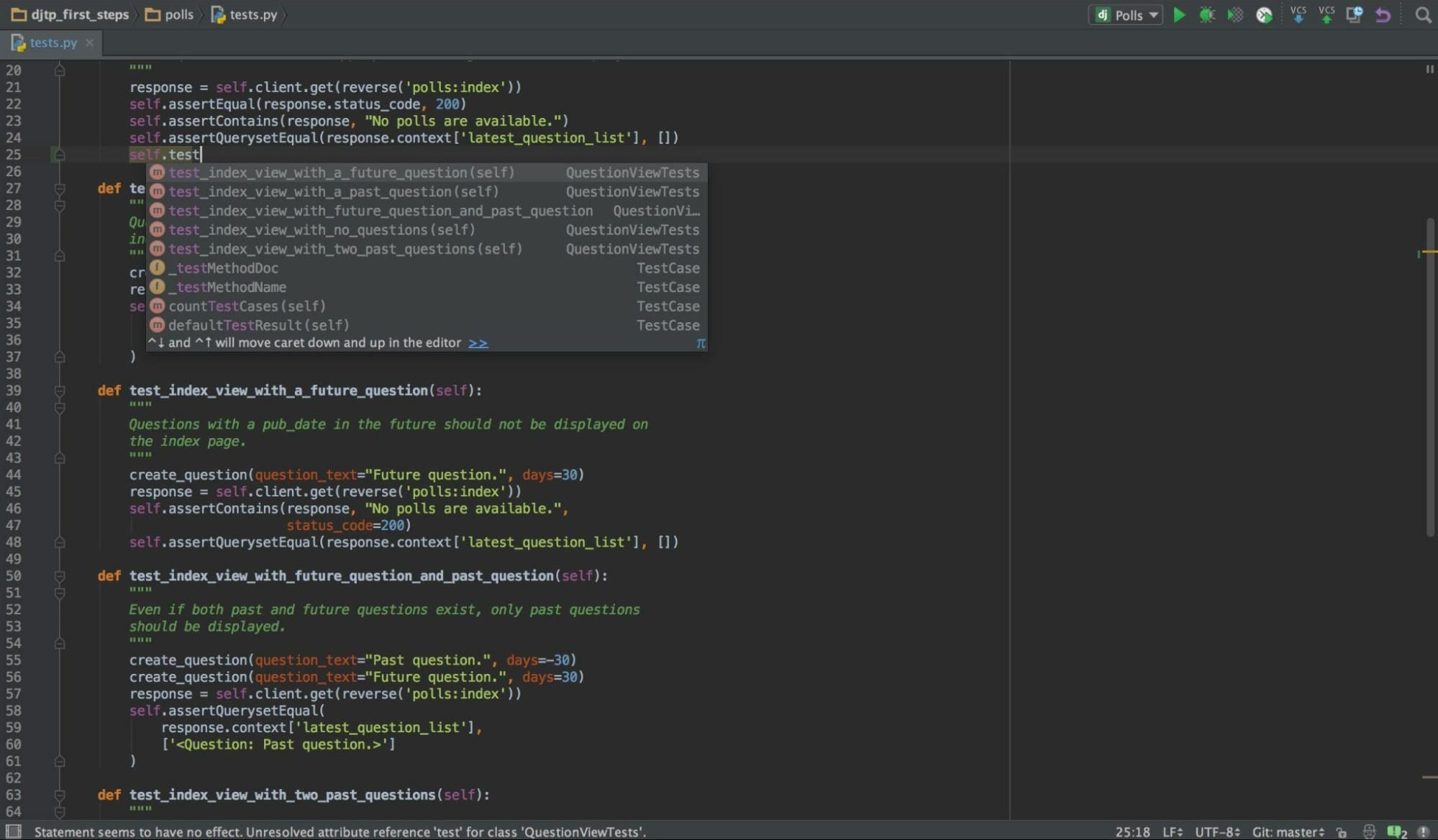 Jupyter Notebook is a popular and open-source web application. The name comes from the programming languages Julia, Python, and R that it supports. You can use this tool to support interactive development, share documents containing live code, create visualizations, and more. Also, it uses a console-based approach for document authoring and the facility to add notes with your codes.

Data scientists and machine learning engineers prefer this tool for various complex tasks. This is because Jupyter eases the creation and execution of your code where you only have to execute one cell to test the code instead of running the entire program.

Also, it being open-source attracts the contributors to improve it even more making the creation of neural networks even more easier.

Furthermore, it creates detailed and actionable error messages so that you can troubleshoot your code easily.

The language was initially conceptualized to implement deep learning models as easily as possible. Currently, it runs on Python 2.7 and 3.5. 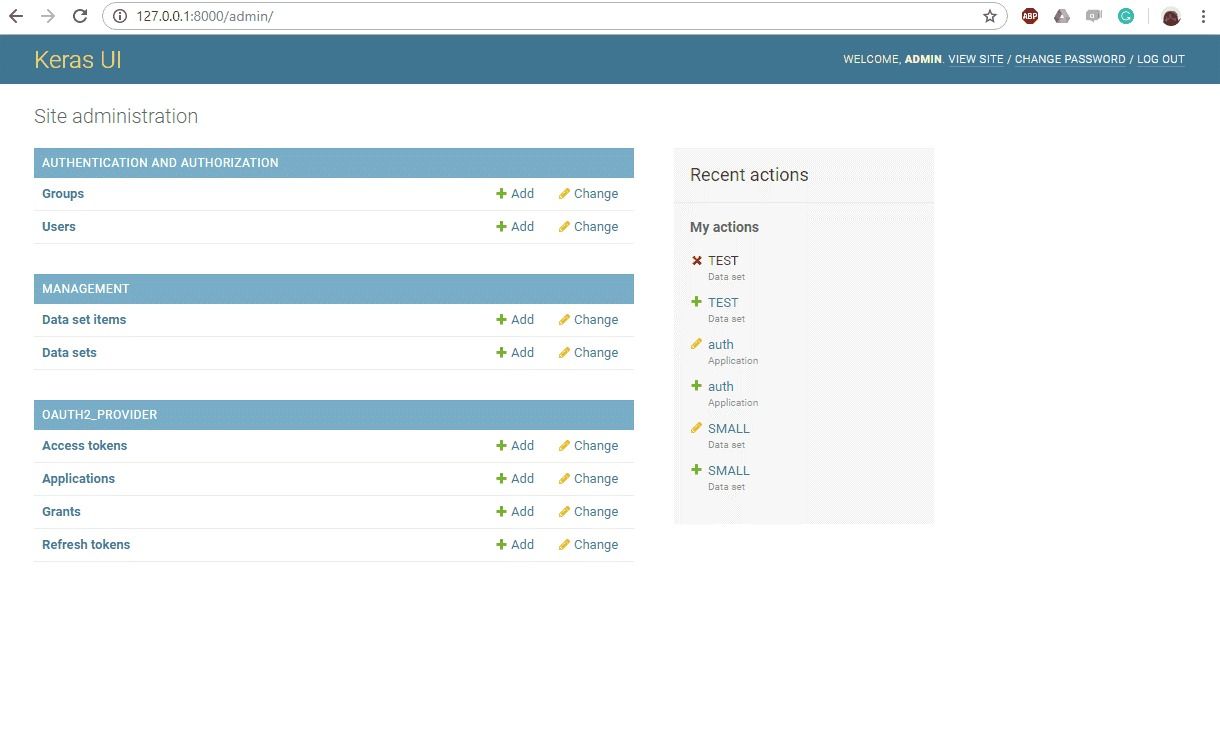 After getting command over the Python programming language, you may want to dive deeper into fields such as data science, artificial intelligence, or data analysis. In such cases, you may need to install some additional packages. For this, you need a tool such as Pip.

Most Python developers are aware of this package as it comes in handy when one needs to install any Python package.

For package management, pip comes installed with Python’s installers since Python 2 and Python 3. In fact, with Python 3, the installer has the option to install pip on your system by default.

Pip is very similar to package managers used by other languages such as JavaScript uses npm for package management, Ruby uses gem, and the .NET platform uses NuGet.

Vim is a text editor that is an enhanced version of the UNIX editor Vi. With plenty of extensions available, you can customize it easily. If you develop a hold over this editor, you can easily use Vim for Python development. However, if you are new to it, you will need some time to get used to it.

Some of the prominent features of Vim include the separation between viewing and editing of the file, the ability to integrate with a large system of plugins, advanced editing commands, syntax highlighting, graphical versions, and much more. 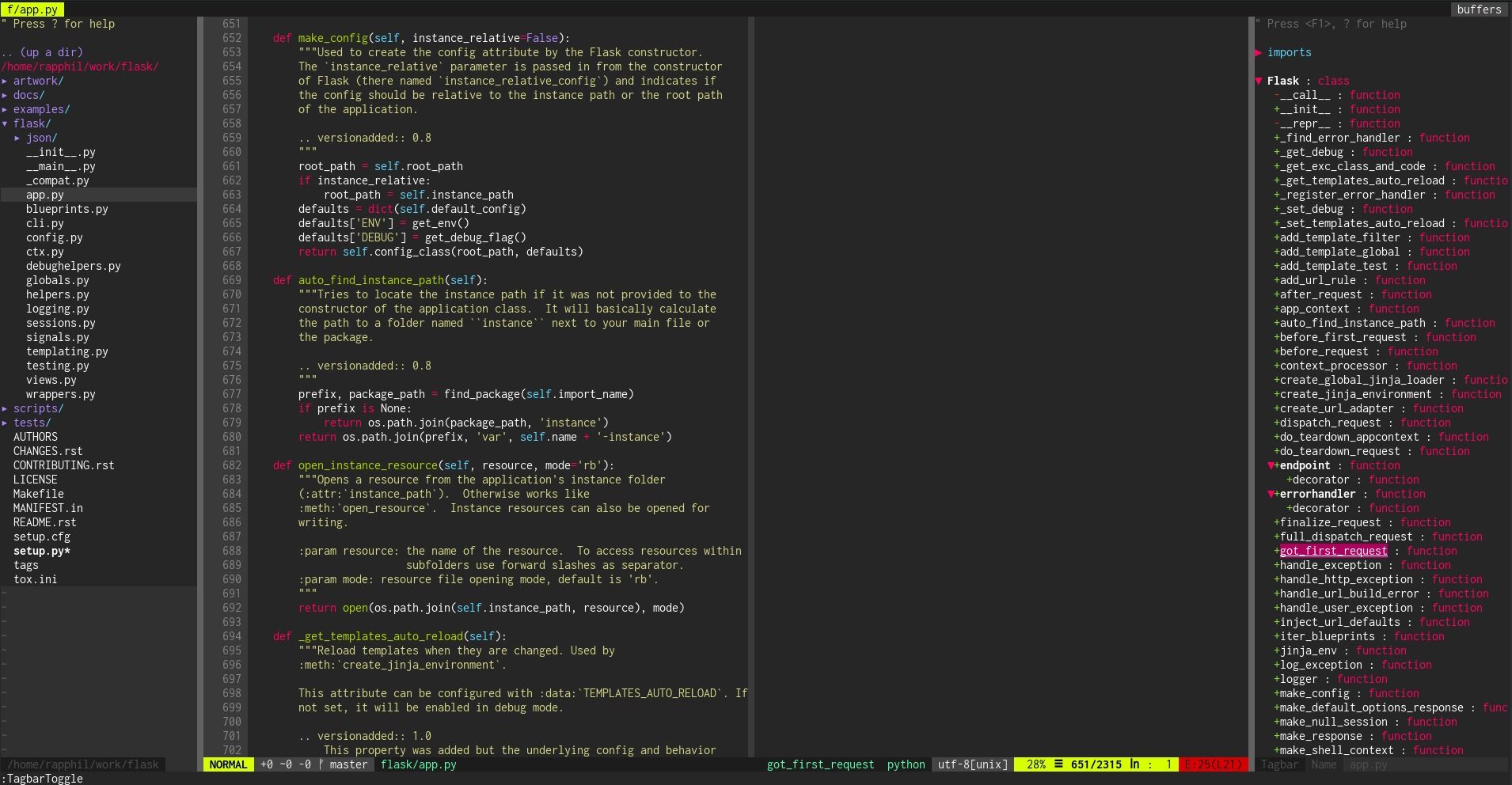 Selenium is also among the list of best Python development tools. It is an open-source automation framework for web applications and a tool for agile testing in Python. This tool aids in writing test scripts for multiple programming languages such as Java, C#, PHP, and more.

It allows performing tests for multiple browsers in operating systems such as Windows, macOS, and Linux.

Additionally, to manage test cases and reports, one can integrate it with tools like JUnit and TestNG

Not to miss, you can also convert automated tests into manual function tests upon need.

Sublime Text is a lightweight text editor that creates clean Python code. This tool is fast, and supports many languages. The editor also supports plugins that you can use to enhance its capabilities.

Its major attractions are the highly context-aware auto-completion feature and syntax definition engine.

And, as it is beginner-friendly, it possesses extensive Python API documentation.

As Python is open-source, you can easily find its codes online in popular repositories. However, in order to make their programs open-source and freely available, developers need to create documentation. And, this is where Sphinx comes in.

It serves as the most viable tool when you need to generate documentation for your code.

To start, it works on terminal or cmd for windows and asks you some basic questions about your code. Thereafter it generates a file for your use.

Thonny is a dedicated Python integrated development environment that is easy to start with especially for beginners. Some highlighting features of Thonny are a simple built-in debugger, variable explorer, built-in Python shell (Python 3.7), an editor that highlights syntax errors, and auto code completion feature.

Some other benefits of Thonny IDE include expression evaluation, representation of function calls on a separate window, and highlighting of syntax errors. It can also inspect code to provide bracket matching.

Scikit-Learn is one of the most useful open-source libraries for machine learning in Python. The library consists of a massive collection of tools for statistical modeling and machine learning including classification, regression, clustering, and dimensionality reduction.

The library has mostly been written in Python and is built upon NumPy, SciPy, and Matplotlib. Also, some of its core algorithms are written in Cython to improve performance.

Other than that, the library uses a unified and consistent Python interface to implement ML, visualization, pre-processing and cross-validation algorithms.

Some other benefits this library has to offer include acceleration in object classification, assistance with continuous-valued attribute prediction and regression, clustering of support-vector machines, gradient boosting, and more.

These tools and libraries have been go to’s for Python programmers and software engineers to improve the code speed, create clean code, auto complete code, download large data and organize it for varied uses.

Python is a versatile and highly popular language that offers plenty of tools for a wide range of needs and functionalities. And, now that you have seen Python's best tools and their features, you can make use of the ones most suited to your requirement.

If you have any more queries, you can shoot us your question down in the comments section.

Is Python good for developers?

Yes. It can develop multi-protocol network applications with simple syntax.

Is Python a tool for data science?

Python is not a tool but a language. However, it provides several tools for data science making it popular among the data science community.

Why is Python Anaconda so popular?

It is popular as it offers the distribution of the Python and R programming languages for scientific computing. This simplifies pakange management and its deployment.

What developers use Python?

Can you create a tool in Python?

Yes. Through the Python toolbox template.

Which Python libraries can I use for image processing?

Some of the most popular image processing libraries in Python include: OpenCV, Scikit-Image, SciPy, Pillow/PIL, NumPy, Mahotas, SimpleITK and Pgmagick.

Do we need a build tool for Python?

As Python is an interpreted language, there is no need for a build tool unless you use extensions.

Why is Python more preferable than any other language?

It is more preferable owing to its simple syntax and clear code that makes it easy to use both for experienced and beginner developers.