Why Is Python Best Adapted to AI and Machine Learning?

With more organizations developing AI-based applications, it’s essential to use a programming language that reduces the complexity of code and enables its easy implementation. Today, there’s a big emphasis on artificial intelligence (AI), data science, and machine learning (ML) with Python. Why? Because it offers easy-to-use and flexible tools, is extensible, has a large number of libraries, and a vast community of Python developers.

This article will examine why Python is the best choice for AI and ML and how it stacks up against other popular languages.

The popularity of Python in AI/ML 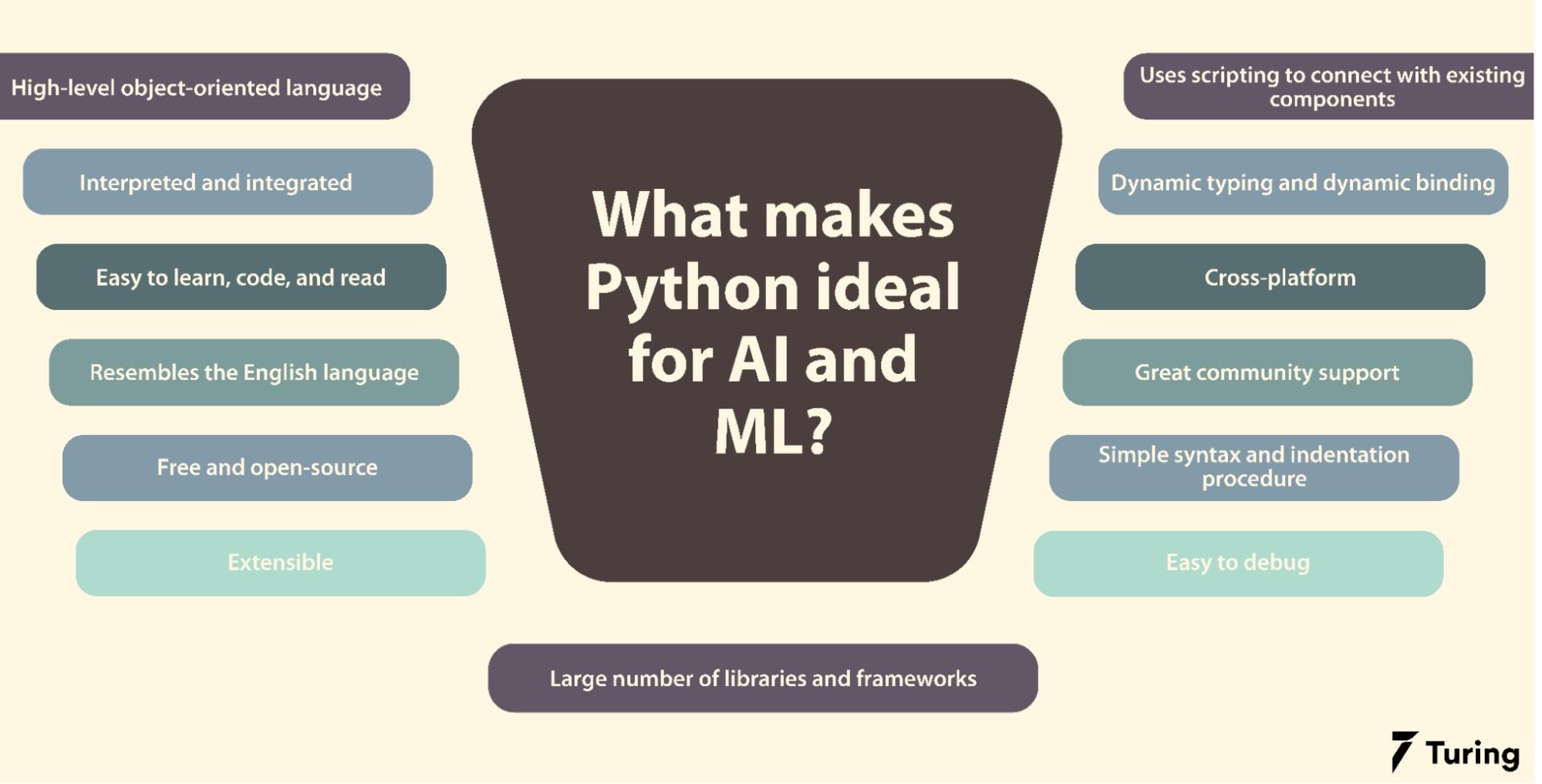 There are many reasons why Python is the preferred language in artificial intelligence and machine learning as underlined below:

Huge number of libraries and frameworks

Building AI/ML applications is complex and time-consuming. However, there are many libraries that are compatible with Python. This is the primary reason developers prefer it over other languages.

Note: Libraries are pre-written pieces of code that can be reused by importing them in the editor and calling the function.

For example, the Scikit-learn library provides a number of implementations of ML algorithms like linear regression, logistic regression, support vector machines, etc. Other libraries include spaCy, Natural Language Toolkit (NLTK), etc. Meanwhile, TensorFlow, PyTorch, and Keras libraries are popular among the AI community. Several others like NumPy, Pandas, and Seaborn allow easy manipulation of data. These libraries, which are only available in Python, reduce the time and complexity of writing code.

Python’s syntax is simple and resembles everyday English. This reduces the time developers take to learn and understand the syntax and implement it. Moreover, Python doesn’t involve the use of brackets as it uses indentation, which again reduces complexity.

No need to recompile source code

Developers don’t need to recompile source code each and every time. Rather, they can quickly make changes and see the results. This flexibility is one of the biggest advantages of using Python.

The Python code is capable of running on different platforms like Windows, Mac, UNIX, and Linux.

Being a popular open-source programming language, Python has a large global community. The user base is eager to help and welcomes participation of all levels. This is also helpful when debugging code.

Python provides good readability of code since it uses indentation which properly structures the code.

The core philosophy of Python is summarized in the document The Zen of Python by Tim Peters as stated below:

Python vs. other languages

There’s no doubting the popularity of Python for developing artificial intelligence and machine learning applications. The fourth edition of the annual Python Developers Survey conducted by JetBrains and the Python Software Foundation found that 85% of Python developers used Python as their primary language, while the remaining 15% used it as their secondary language. More than 28,000 Python developers participated in the survey.

JavaScript was found to be the most popular language that developers combine with Python. The survey also showed that more than 50% of developers favored Python for data science. An interesting point to note is that just 3% of web developers solely used Python whereas 73% used Python and JavaScript.

Although Java is considered to be faster than Python during runtime, developing a Python program takes less time due to reduced lines of code. Python codes are usually 3-5 times shorter as compared to Java. This difference is significant since Python programmers don't waste time declaring types of arguments or variables.

For instance, while evaluating a+b in Python, the interpreter first identifies the type of variables - which is not required in Java. Instead, in Java, the compiler is already aware of the type of variable and hence, compiles faster than Python. Meanwhile, Python allows overloading of the operator in user-defined cases which is not possible in Java. For these reasons, Python is better characterized as a "glue" language.

Like JavaScript, Python implements a programming style that uses simple functions and variables. However, there is a disadvantage of using JavaScript when it comes to community support as users may not find enough material to build artificial intelligence and machine learning applications. Python also supports object-oriented programming which allows reusability of code classes and inheritance. This is not applicable to JavaScript.

What is written for Java is also applicable to C++. However, Python’s code is 5-10 times shorter than that of C++. Being a glue language, it combines the components within C++.

In this article, we’ve explored the many advantages of using Python for AI and ML. We’ve also seen how it stacks up against other popular languages. It is evident that the vast number of advantages that Python offers has made it one of the most popular programming languages for building large-scale AI-based applications.

Chebyshev inequality in statistics is used to add confidence intervals...

K-means clustering identifies clusters of data objects within a given data set using an...

Automata theory or the theory of computation is a theoretical division of mathematics...

Why is Python best for artificial intelligence?

Python is considered to be a ‘glue’ language where it can easily interoperate with libraries of other languages like C/C++.

How should I decide which Python library is suitable for my machine learning task?

Dataset and target variable (s) are the two major factors that help decide which Python library is suitable for a machine learning task.

Why is Python commonly used in AI environments?

Python is commonly used in AI environments because of the vast number of libraries and frameworks available, thus helping developers achieve tasks quickly. In the last few years, there have been a lot of open-source contributions by developers towards creating a large number of libraries/frameworks, most of them written in Python.

How do I design a machine learning project in Python?

Why is Python so popular for machine learning?

Python is popular in machine learning primarily because of its simple syntax and reduced length of code compared to other languages like Java. It resembles English, which assists in debugging and helps developers contribute significantly to open-source codes. Machine learning codes are complex but Python reduces the complexity.