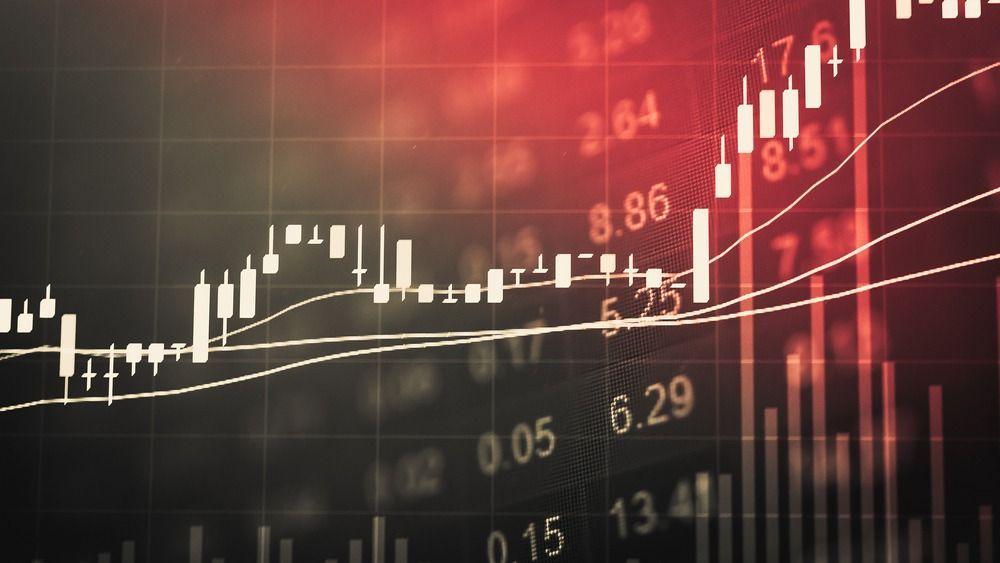 How should you decide when to use a linear regression model? How does a system decide the best fit line, the error and how it can be minimized? This article will provide answers to these questions and an understanding of the linear regression approach as a whole. Let’s dive in.

What is linear regression? 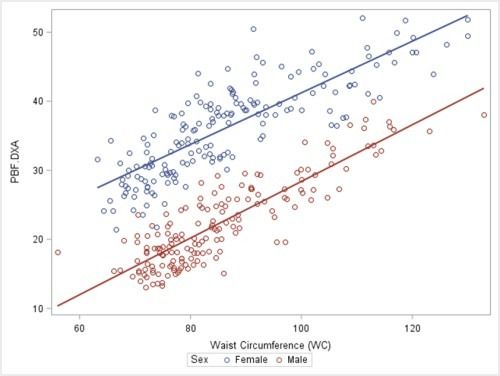 Example #2
Linear regression may be used in the medical field to understand the relationships between drug dosage and patient blood pressure. Researchers may manage different measurements of a specific medication to patients and see how their circulatory strain reacts/blood pressure responds. They might fit a model using dosage as an independent variable and blood pressure as the dependent variable. The equation would be:

Example #3
Agriculture scientists frequently use linear regression to see the impact of rainfall and fertilizer on the amount of fruits/vegetables yielded. For instance, scientists might use different amounts of fertilizer and see the effect of rain on different fields and to ascertain how it affects crop yield. They might fit a multiple linear regression using rainfall and fertilizer as the predictor variables and crop yield as the dependent variable or response variable. The regression model would take the following form:

What kind of relationship can linear regression show?

When the regression line between the two variables moves in the same direction with an upward slope, the variables are said to be in a positive relationship. This means that if the value of x (independent variable) is increased, there will be an increase in the dependent variable.

When the regression line between the two variables moves in the same direction with a downward slope, the variables are said to be in a negative relationship. This shows that if the value of the independent variable (x) is increased, there will be a decrease in the dependent variable (y).

The main idea behind the linear regression model is to fit a line that is the best fit for the data. For this, you use a technique called least square method. In layman's terms, it is the process of fitting the best curve for a set of data points by reducing the distance between the actual value and predicted value (sum of squared residuals). The distance between both values is often known as error or variation or variance.

It’s known that the equation of a straight line is y = a + bx.

Similarly, the equation of the best fit line for linear regression is:

Meanwhile, since there are more than 2 independent variables in multiple linear regression, the equation becomes:

The next question is, what error is this? Can it be visualized? How can it be found? Fortunately, there’s no need to worry about the mathematics of a linear model as everything is done by the model itself.

In the graph above, the best fit line will be similar. The only difference will be the number of data points.
Suppose there's a variable Yi. The distance between Yi and the predicted value is what is called “sum of squared estimate of errors” or SSE. This is the unexplained variance and it must be minimized to get the best accuracy.

The distance between the predicted value y_hat and the mean of dependent variable is called ”sum of squared residuals” or SSR. This is the explained variance of the model and it should be maximized.
An advantage of this error is that it can be used as the loss function since it is differentiable at all points. The disadvantage is that it is not robust to outliers.

The total variation in the model (SSR+SSE=SST) is called the”sum of squared total”.

How do you do linear regression? 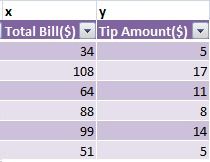 To fit the best fit line, you need to minimize the sum of squared errors, which is the distance between the predicted value and actual value.

Step 1: Check if there is a linear relationship between the variables.

You already know that the equation of a line is y=mx+c or y = x*β1+β0. Make a scatter plot to see a relationship between the variables. Remember that the best fit line will always pass through the centroid, which is the intersection of x_bar and y_bar. 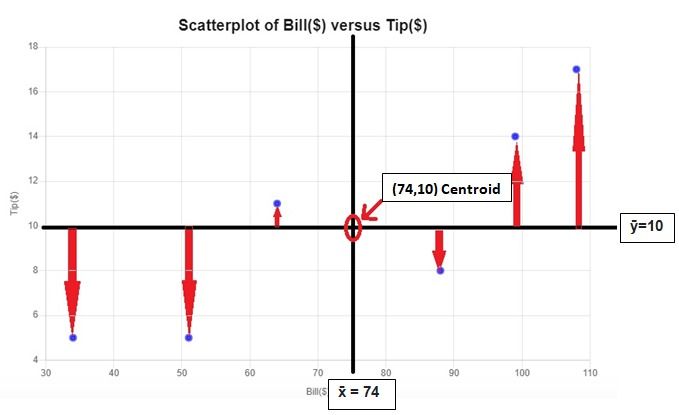 You can see that there is a positive relationship. As the bill amount is increased, there is an increase in the tip amount too. Hence, you can use linear regression to predict the response variable.

Step 2: Check the correlation of the data.

Now that you know that the relationship is positive and very strong, it’s time to start the calculations.
The equation of best-fit line is: Ŷ = x*β1+β0
where β1 is the coefficient of regression or slope. To predict Ŷ, you need to know this coefficient. It will also tell you the change in dependent variable if you increase the independent variable by 1 unit. The formula for finding this is: 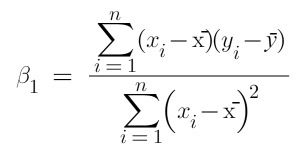 Since there are so many calculations, you can use Python libraries to make the work easier.
The next session will interpret the results of a linear regression on a medical cost dataset. Here is the full EDA and code. 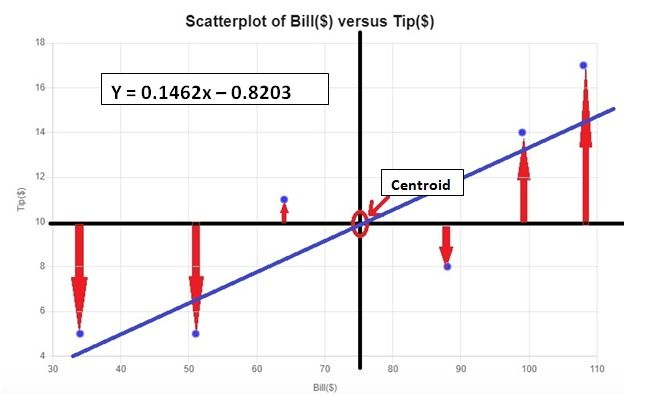 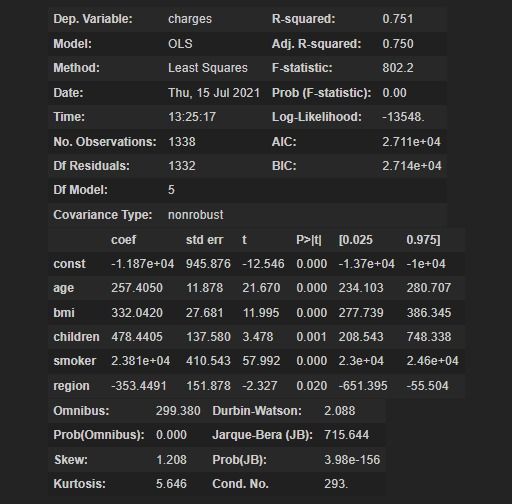 To see the summary of your linear regression model, run the following code: 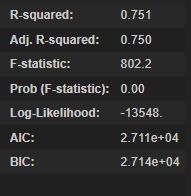 R-squared states the proportion of the variability explained by the model, i.e what percent of the model represents the real-life model. Here’s an example:
You have an independent variable as “CGPA” and a dependent variable as “Package”. You want to apply to xyz college and know the package you will receive after graduating. Since you haven’t mentioned your CGPA or anything to help them give an accurate answer, they will tell you the average package of their previous students. But, suppose you give your CGPA and ask the same question, they will be able to predict the package. In essence, they will fit a linear regression line to their previous data to arrive at an answer.

The R2 score shows the superior results that linear regression can give instead of basing them on the mean of other students.

where it is used to know the accuracy of the model.
The range of R square is from 0-1, but can it go below 0? When will this value be 1 and what will that mean?

Here, you can see that the R square value is 0.751, which means that the model could explain 75.1% variance in the data or that the fitted values represent the original values with good accuracy. Since it is a tabular dataset, the values are continuous and the target column must have varying values. By looking at this value, you can say that the features provided to the model were able to explain 75.1% of the variability. You can’t say anything about the remaining 25%.

Every time you add a new input variable, there will be an increase in the R square. Hence, it’s not wise to use the R square to decide whether to add a new input variable. To address this, a quantity known as "adjusted R-squared", which is a modified version of R-squared, is used. It’s more useful when you add irrelevant variables to the model. If you add variables that do not affect the target variable, the adjusted R-squared value will decrease and R-squared value will increase. Note that it is always lower than the R square.

F-statistic: The value of F-statistic here reveals that not every one of the coefficients of the model may be equivalent to 0. If the overall F-test is significant, you can conclude that R-squared does not equal 0 and that the correlation between the model and dependent variable is statistically significant.

The null hypothesis here is (H0): The model with no independent variables fits the data as well as the model.

The alternate hypothesis (H1): The model fits the data better than the intercept-only model.

The p-value helps check whether there is enough evidence to accept the alternate hypothesis. If you are testing at a 95% confidence interval then, if:

Let's interpret this and see what can be derived. Keep in mind that you need to have rudimentary knowledge of statistics to better understand Machine Learning.

Coefficients can also highlight how significant the variable is for the model. If the coefficient value is close to 0, you can say that there is no relationship between the variable and the target variable. 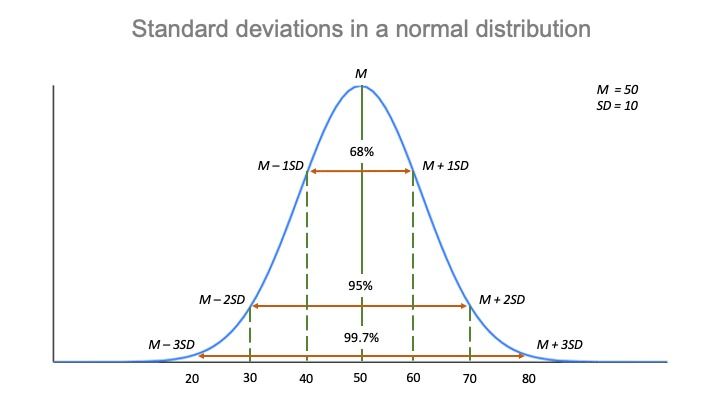 Here in the regression model, the standard error gives the estimated standard deviation of the distribution of coefficients.

t-stat - t-statistic or t-value is calculated by dividing the coefficient from the standard error.

t-stat = Coefficient/Std.Error
The value of the t-statistic will help determine if the coefficient value is really that number or if it happened by chance. If the value of t-statistic is greater than the tabulated value

P > |t| - p-value is the probability for the null hypothesis to be true. If you look at the p-value of age, you can see that the probability that the null hypothesis is true is approximately equal to 0. P-value will show that it is very unlikely that there is no relationship between the independent variable and the dependent variable, which means that the coefficients are not 0 at the population level.

Congratulations on learning to interpret the linear regression model from scratch! It’s always better to know what’s happening under the hood. It’s important to understand what these terms inform in this model as only then will you be able to proceed and make good predictions.