Getting Started With Asynchronous JavaScript 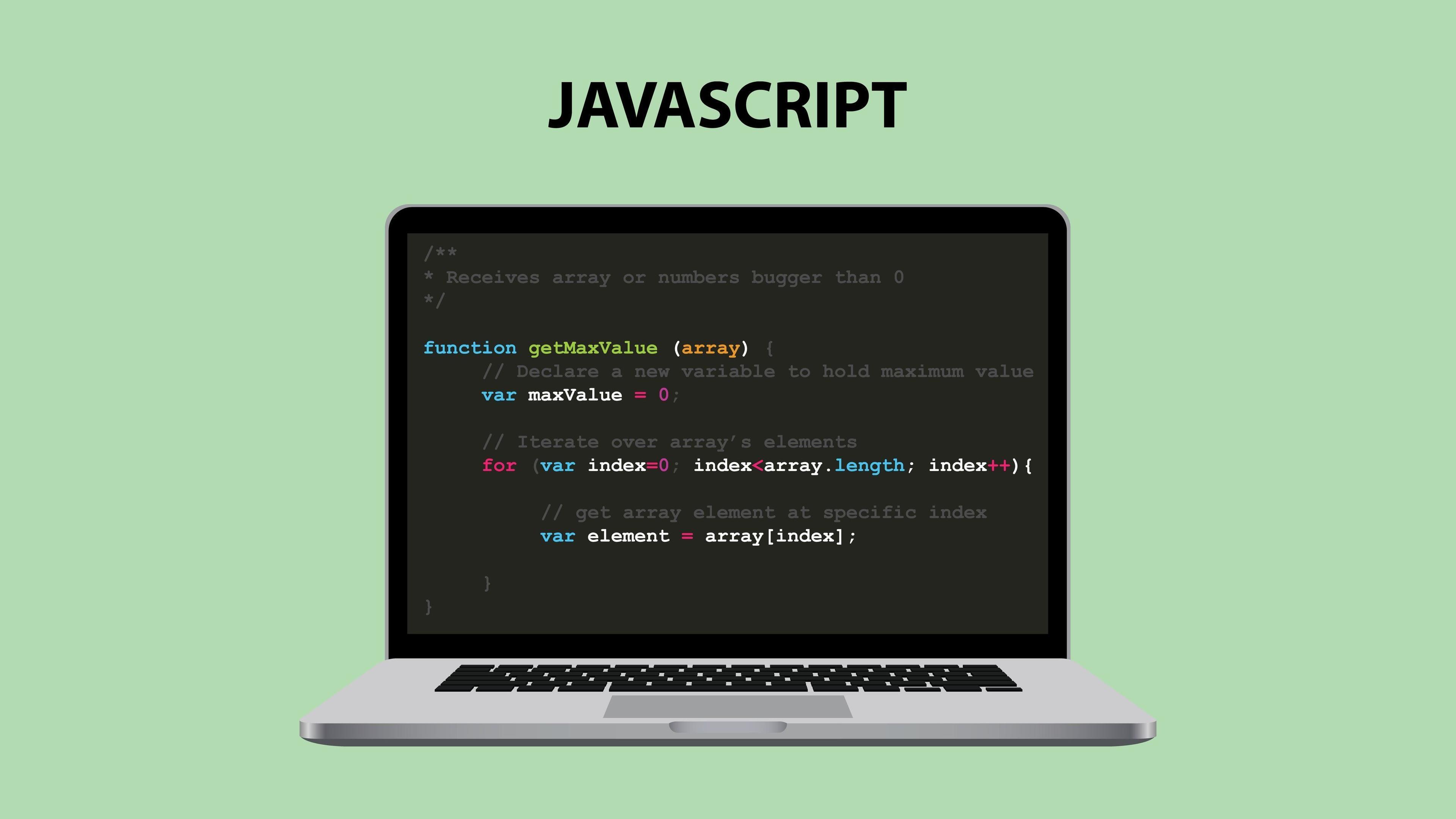 A StackOverflow survey reported that over 68.62% of professional developers prefer and happily use JavaScript as their programming language. But what makes JavaScript the most popular language in the world? Well, it is the asynchronous nature and the flexibility and the availability of this programming language that is implemented consistently by various browsers.

Let's find out more detailed information about JavaScript along with its functions and sample code.

What is Asynchronous JavaScript?

The single-threaded language makes writing code an easy task. Therefore, parallel issues are no longer a concern for programmers. But you can't perform lengthy operations such as API calls without blocking the main thread.

For instance, if you are requesting some data from the server via API. Depending upon various factors like server response time or network stability, it can take a little longer for the server to respond to that request. As a result, the program will block the main thread and can make the whole webpage unresponsive.

When HTML and CSS are combined with JavaScript, web pages become interactive. You can add animations or increase the responsiveness of a webpage using it. JavaScript was created by Brendan Eich in 1995 and was originally called LiveScript, but it was renamed JavaScript when it was released as an open-source language in 1997.

Difference between Synchronous and Asynchronous JavaScript

As an asynchronous architecture does not block, tasks can be executed simultaneously without being affected by each other. Synchronous, on the other hand, is a blocking architecture that requires each operation to be completed before the next one. Each task requires an answer to proceed.

In Async, multiple requests can be sent to the server simultaneously, while in Sync, the server only receives one request at a time and must answer that request before sending another.

What are event loops in JavaScript?

It is the event loop that makes JavaScript's asynchronous programming possible. With JS, all operations are executed on a single thread, but a few smart data structures make it appear that multiple threads are running simultaneously. We'll look at what happens on the backend in the following illustration. 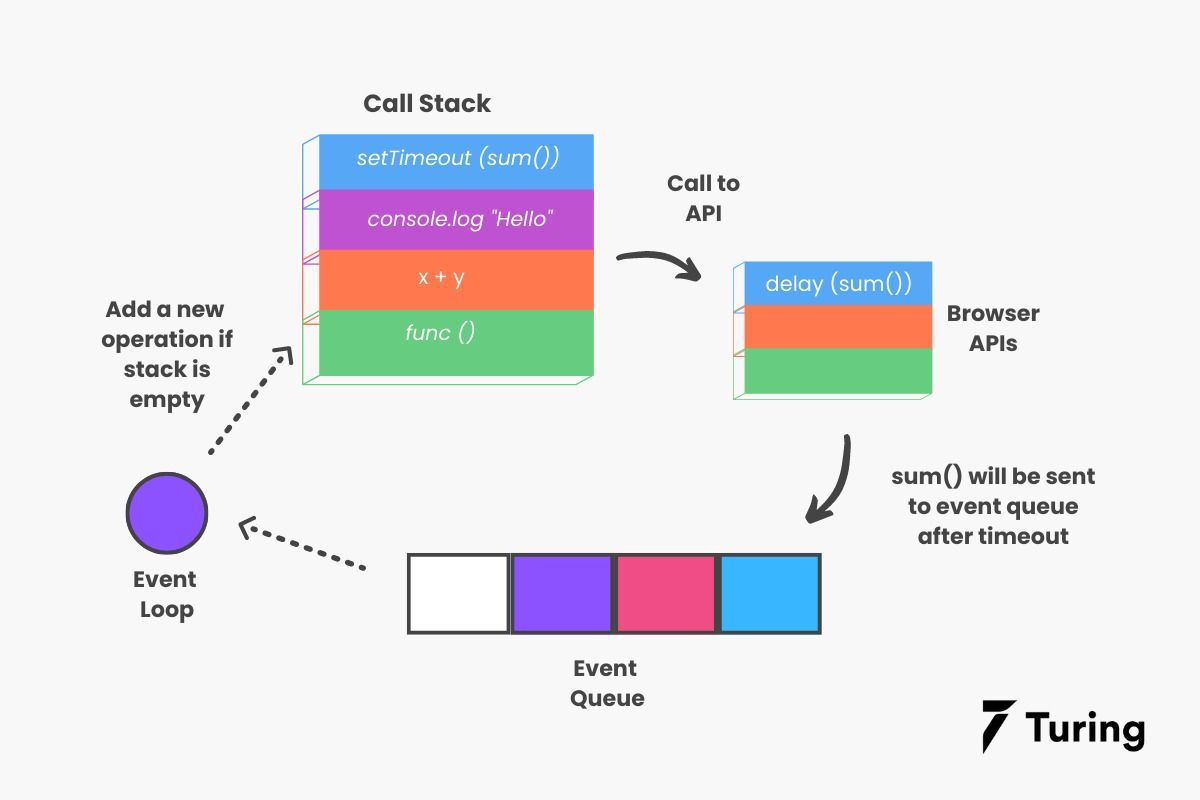 The following features are included in the Event Loop:

What are callbacks in JavaScript?

As soon as another function in JavaScript has finished executing, a callback function gets executed.

In other words, any function that gets passed as an argument to another function so it can then get executed in that function is known as a callback function.

Developers need callback functions because many JavaScript actions are asynchronous. That means they don't stop the program from running until they get completed. Instead, they are executed in the background while other functions from the code are executed simultaneously .

The following example will demonstrate the concept of the callback function.

In the above example, we have declared two functions. Our greeting_person() function has two arguments (a string value and the function_name).

An example of a callback function is the callMe() function

Features of the callback function.

What are JavaScript promises?

Before the introduction of promises, developers were using events and callback functions. However, they created unmanageable code and have limited functionality. Also, the events were not that good at handling asynchronous JavaScript operations. Handling multiple callbacks simultaneously isn't easy for any user.

Now, promises are the most preferred choice for asynchronous JavaScript operation handling in a simple manner. A promise is capable of handling multiple asynchronous operations at once and handles errors better than a callback or an event.

There are four stages in which promises can exist:

Promises can either be fulfilled with values or rejected with reasons (errors). A promise's then method calls the handlers queued up by either of these options when either occurs. In order to call a handler, the promise must either be fulfilled or rejected first. So it is an asynchronous JavaScript operation completing before its handler gets attached does not cause a race condition.

The following code will demonstrate the concept of Promises in async JavaScript along with output.

This code, after execution will result into

Following are the benefits of Promises

What is Async/Await function in JavaScript?

By using the asynchronous programming method, a program will be able to execute a function without freezing the entire program. The Async/Await language simplifies promise writing for developers.

The function has to return a promise if it is prefixed with the keyword "async". In an async function, "await" is always used so that the program waits until the promise has been resolved.

Let's see them one by one with code examples.

An async function is a function that gets prefixed with the async keyword, and the await keyword gets added within it. Both async and await keywords enable the asynchronous, promise-based behavior of the function to be written in a simple style to avoid explicit configuration of the promise chain.

An async function can also get written with zero or more than one await function.

A promise-returning function behaves like a synchronous function until it is fulfilled or rejected using an await expression.

The promised value is assigned as the return value to the await expression when the promise has been resolved. Asynchronous JavaScript code can be surrounded by ordinary try/catch blocks while using async and await.

The following code will demonstrate the use of the async/await function in JavaScript.

This article was a brief introduction to asynchronous JavaScript, the most popular programming language. It also discussed how async is an important concept that you should know while learning JavaScript.

JavaScript is a programming language that has been around for over 20 years now. It has been used by developers to create interactive web pages, websites, and mobile apps for various platforms. The versatility of the language can be attributed to the fact that it can be used in many different ways. Asynchronous JavaScript code execution is handled by an event loop, which executes each task in sequence and does not allow any blocking operations like I/O or long computations.

Async/await is another feature that has been added recently. It allows you to use await for async functions, which is great for long-running tasks or when you need some data from an API before moving on with the rest of your code.

Things built on the web are extremely diverse and can differ from one another in terms...

Code splitting is a method of separating large files into smaller bundles...

If you are working on developing an app or game, one of the most important things to do is...

What is an async function JavaScript?

If a function gets declared with an Async keyword and the await keyword is permitted within is known as the Async function.

With the async and await keywords, we can write asynchronous, promise-based behavior in a cleaner manner without requiring any explicit configuration of promise chains.

Why use async await in JavaScript?

JavaScript is a synchronous language by nature, which means it prefers an event loop system that allows us to queue up actions that won't get taken until the event loop becomes available after the queued code finishes executing.

The Async/Await functionality is one of many functionalities in our program that make the code asynchronous. In other words, Async/Await helps us to make JavaScript work as a multi-threaded programming language and execute different codes parallelly.

How does async and await work?

The await keyword can get used in an async function before calling a promise-returning function. It forces the code to wait until the promise gets resolved, either with a return or rejected value.

This method allows you to create code that uses asynchronous functions but seems to get written in a synchronous fashion.