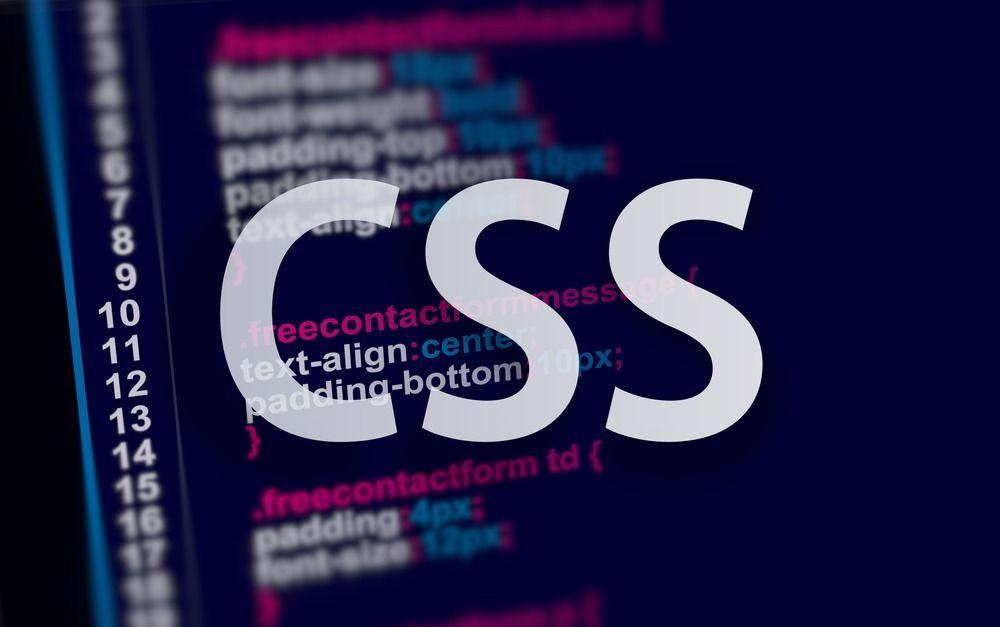 Writing a clean and efficient CSS code is an art. There is a lot to learn in CSS like the properties, elements, attributes, values, and more to write a well-structured and standards-compliant code.

In reality, most developers don’t always get a chance to develop a project from scratch. Most of the time, they receive already written projects, and that’s when they realize the importance of a clean code. This is the reason, as a developer, you need to first understand the source code in order to proceed with the project. If the code isn’t written up to the mark, you will have to invest a lot more time than usual to get things done.

However, in order to write good CSS code, it is necessary to know how to start writing the codes in a better way. So, here are some expert-recommended tips to help you get started.

Best practices to write a clean and efficient CSS code

Start with a framework

It is recommended to use a CSS framework with each design, as it will speed up the production. Some designers have their own framework that they create over time, which helps them to maintain consistency within the projects.

However, this step is advisable only for the designers who already know HTML CSS coding. However, at some point, you have to create certain aspect of layout all by yourself and abrief understanding of CSS will help it get done easily.

Some designers may argue that using a CSS reset is an unnecessary step. But it helps in getting started with a clean base, making it easier to style your website with more predictable outcomes in the end.

It overrides the default styles of the browser. You can either use one of the many resets available online, a combination of the two, or even write one of your own.

Irrespective of the way you write your CSS code in HTML, or the way you add the properties, it is important to maintain consistency throughout the code. Many designers prefer to order their properties alphabetically, while many others use a logical approach, like organizing things by type or alignment. It’s entirely up to you about how you want to do it, but the bottom line is that you stick to the order so that it becomes easy to find things later.

You can also choose to develop your own sub-language of CSS that allows you to name things quickly. You can create certain classes for nearly every team and can use‌ the same name each time.

Another incredibly important aspect of writing flawless CSS code is to ensure that it’s readable. It makes it easier to maintain it in the future and to find elements within a matter of seconds.

!important tag has its place but many times designers use it in desperation when things are not looking right. The truth is that we need to use this tag on very few occasions.

The overuse of the !important tag creates the domino effect that turns into a maintenance nightmare soon.

This is what happens when a CSS code isn’t working as it is supposed to. Developers apply the important task to make it work. What happens here is, this tag offers the highest specificity to so many as compared to that actually required. When you do this, you command the browser to apply the rule under any circumstance. It does not turn out to be good because CSS rules differ from one selected to another or say parent selector to a child.

If you wish to override an important tag, you will have to use another important tag which leads to many more in the entire code. In the end, it will stuff your project code with important tags, which becomes harder to maintain. This is the reason ‌we recommend you to avoid the important tag as much as possible.

DRY or don’t repeat yourself is a general software development principle that aims to avoid or reduce repetition as much as possible in HTML CSS coding and also in other programming languages. To help you understand, here’s an example to point out the difference.

We will be creating 3 CSS classes for three buttons without using the DRY principle.

Next, we will be creating the same buttons using the DRY principle.

You can notice that by applying the DRY principle, we have decreased the number of lines of the CSS code, thus reducing repetition and improving the performance and readability of the code.

The right usage of CSS shorthand

CSS shorthand allows you to set multiple properties of an element in a single line with which you ultimately save space. The entire code takes less time to load with it. But it shouldn’t be used everywhere, as it can disrupt the much-needed clarity required in the CSS code.

For instance: A div might have the following styles.

These styles can be combined in one line like:

Moreover, when you only need to set one or two properties or need to override something, longhand is a better choice to switch to. Another disadvantage of using shorthand code everywhere is that it will reset the ignored properties which will cause an undesirable effect.

Instead of making one giant style sheet, it’s recommended to make smaller and multiple style sheets depending on the complexity of the size and design of the site. Not only are they easier to manage, but they also allow you to leave out CSS on pages that don’t need them.

However, many designers follow this pattern in the initial phase but later tend to combine them into one file. It reduces the number of HTTP requests to one and enables the entire file to be cached on the user’s computer.

Add padding and margins to all elements

The legacy browsers tend to render elements differently compared to the modern browsers. It is due to this reason browser version renders the padding and margins to all elements.

Unknowingly, many designers add extra selectors to the CSS code that glitters the stylesheet. The most common example of adding an extra selector is found in lists.

In the above-mentioned example, we could also have just used the following statement.

It is recommended to avoid them so that we can keep a CSS code as simple and clean as possible.

A list is an ideal way to represent your data in a structured format whose style can be easily modified. You don’t even have to use the list as a text attribute given to its display property.

They are also a great way to create navigation menus and other things likewise. As for beginners, it is worthwhile to learn about the list to list elements to structure data in the future.

Make use of multiple classes

It is recommended to add multiple classes to an element for a clear understanding of the CSS code. Let's get a detailed understanding with a simple example.

Assume that you have a div “box” that you want to float left. Considering you have already got a class .left in your CSS code that floats everything to the left. So adding an extra class to the declaration, here’s what you can do.

This way you can add several classes to any declaration. This situation occurs when you have to take individual classes into account. You can create class names that hint at how they affect the layout. Additionally, you should avoid using class names that will request you to constantly switch between CSS and HTML. 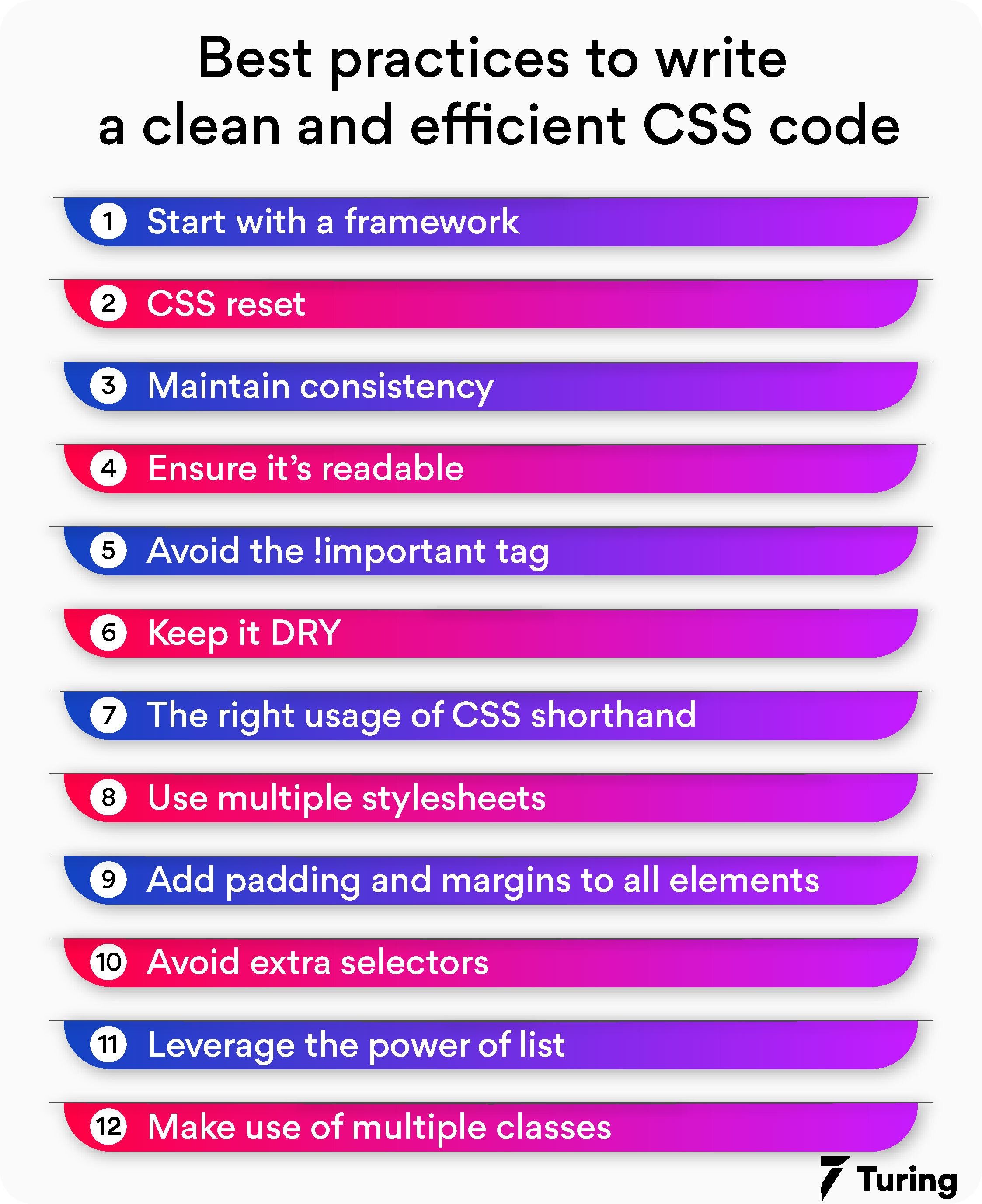 A few minor adjustments, as discussed above, can help you make a big impact on your CSS code file. So, try your hand at these simple ways to improve your CSS skills so that you can write cleaner and better CSS code.

Abstract Class vs Interface in C#: Uses and Differences

Abstract class and interface in C# are used to perform the abstraction, get to know a detailed comparison between the two...

Though CSS deals with creating and styling smart layouts on the web...

When developers create mobile apps, they need to build and maintain the UI...

How can you organize your CSS code?

To organize your CSS code, here are some great tips to start with.

What is the best practice for writing, including CSS files?

The best approach to writing, including CSS files, is an external Style Sheet (using HTML Tag) that is used to link the element. This is the best method to maintain and reuse the CSS file across different pages with ease and efficiency.

What is the priority order of CSS?