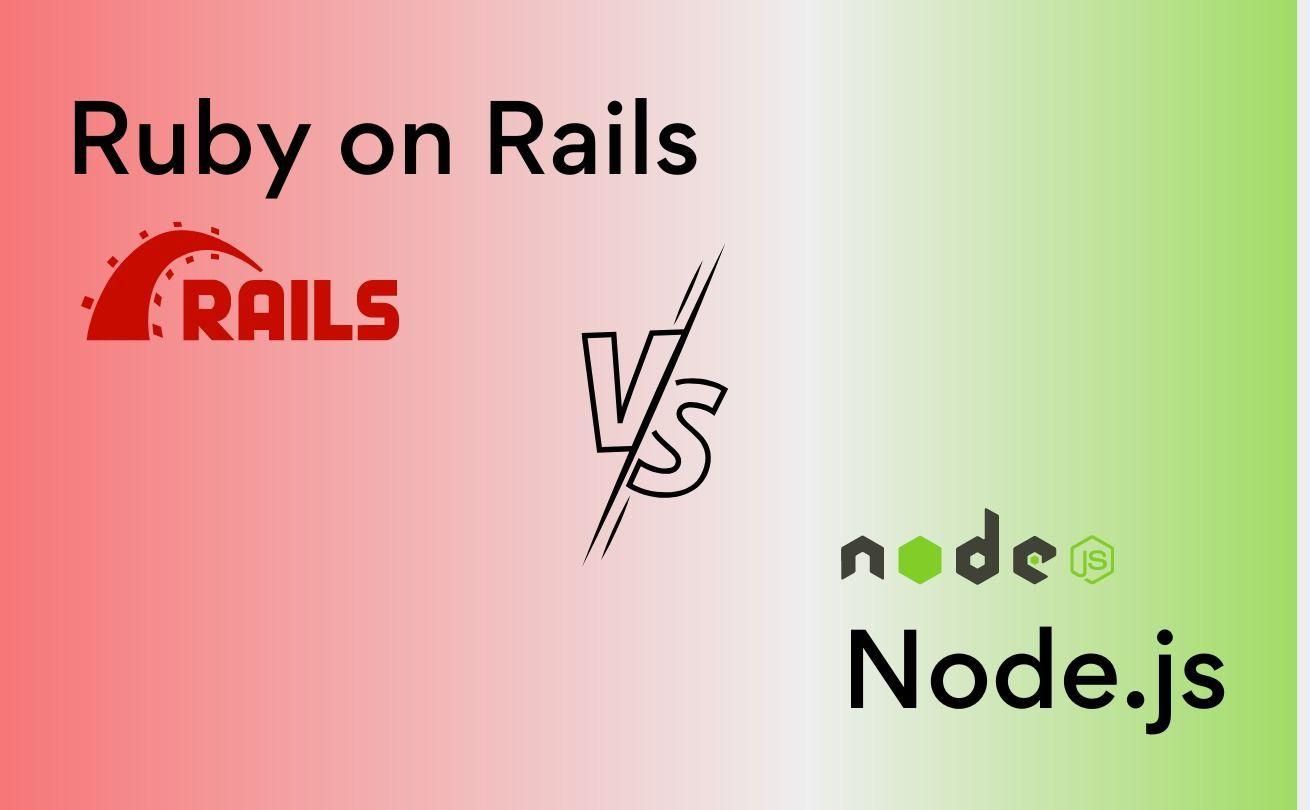 When comparing Node.js vs Ruby on Rails, there are plenty of things to bear in mind. To start with, they aren’t identical and they aren’t in the same categories of comparison. This is often because frameworks are different from runtime. Nevertheless, in this article, we’ll closely look at the two and will attempt to identify which is better.

Node.js is an asynchronous event-driven JavaScript runtime that's designed to build a scalable network application. It is built on top of Chrome’s V8 engine and runs on the server side. It performs a non-blocking I/O operation through the assistance of an event loop.

What is Ruby on Rails?

Ruby on Rails, or Rails, is a server-side web application framework written in Ruby under the MIT license. It uses the model-view-controller (MVC) framework that gives default structures for databases, internet services, and sites. It encourages and facilitates the utilization of web standards like JSON or XML for data transfer and HTML, CSS, and JavaScript for user interfacing.

Additionally, Rails emphasizes the utilization of other well-known software engineering patterns and paradigms, including convention over configuration (CoC), don't repeat yourself (DRY), and therefore, the active record pattern.

Features of Node.js vs Ruby on Rails

Let’s compare some of the features of these technologies side-by-side.

Pros and cons of Node.js vs Ruby on Rails

Let’s explore the benefits and drawbacks of Node.js and Rails.

Advantages of Ruby on Rails

Disadvantages of Ruby on Rails

Node.js is capable of building an application that needs real-time updates, such as collaborative tools. An example is the famous project management application, Trello. This real-time flow is possible because of Node.js’s feature, which is an event-driven and non-blocking model.

Node.js’s writable and readable feature makes it great for transmitting and receiving an outsized amount of data in a smaller package instead of a single batch. This is super helpful for audio and video streaming applications. The in-built modules make the task simple. Companies like Netflix leverage Node.js’s streaming capability.

Node.js is popular for its speed and performance, making it useful for creating real-time messaging and chat applications. For instance, WhatsApp Messenger, Facebook Messenger, etc. There’s enormous support for the heavy traffic of multiple short messages or chat rooms when messages are shown to several users in real-time.

Uses of Ruby on Rails

Rails is known for its simplicity. It also provides plenty of helpful gems to accomplish specific tasks. This is why building an ecommerce application with it is easy and straightforward.

Rails is used to build social network apps. Even Twitter uses it. What sets it apart is that there’s no need to write too many lines of code to make the implementation work.

For anyone wishing to develop a content-focused website, Rails is the solution. Thanks to the extensive material available, anyone can easily create an internet site with ready-to-use tools that are excellent for producing and disseminating content. The libraries are chock-full of plugins and extensions.

Popular applications built with Node.js and Ruby on Rails

Well-known fintech company, PayPal, is written with Node.js. The platform allows users to swiftly and conveniently conduct financial transactions with each other online in more than 100 different currencies.

The multinational technology firm headquartered in the United States is best known for its online portal, program, and related services. The program accounts for 1.65% of the 4.57 billion consumers who use search engines worldwide.

LinkedIn allows both companies and job seekers to post positions and is usually used for professional networking and career advancement.

Among the companies employing Node.js, Netflix is perhaps the most well-known to people. It offers consumers a streaming service for television and movies.

This is a popular web marketplace with a focus on experiences and short-term homestays. As a broker, the business takes a commission from each reservation.

This is a popular American subscription streaming service with a majority of it owned by The Walt Disney Company. NBCUniversal, a Comcast company, owns the remaining shares.

Node.js is a very advanced technology that is continually developed and updated. It is frequently used for large-scale applications. In contrast, Ruby on Rails is a simple-to-learn framework that is ideal for small IT businesses. It can be used for both frontend and backend development. As for which is better, we can only draw one conclusion: the more Node.js and Ruby on Rails expertise you have, the better. The choice to use either technology should be based on the needs and goals of your project. Having knowledge of both will also open up numerous opportunities for Node.js developer jobs and Ruby on Rails jobs.

There is no shortage of languages available for web development. Hundreds of them are used...

Is Ruby on Rails better than Node.js?

This is entirely up to your business. If performance is the only factor, Node.js is the best option for you. However, if all your business needs is a CPI-intensive activity, Ruby on Rails would unquestionably be the better choice. In the end, each technology performs a certain task better than the other.

When to use Ruby on Rails?

Ruby on Rails is best used for developing a reasonably modest application. It’s mostly used by small IT businesses.

Is Node.js faster than Rails?

Yes, since Node.js has features like the Google V8 machine, single-thread, and event loop.

What kind of architecture does Node.js support?

The single-threaded event loop design is supported by Nodejs.

When to use Node.js?

Node.js is the way to go if you want to create a project that is both fast and scalable.

What kinds of architecture does Ruby on Rails support?