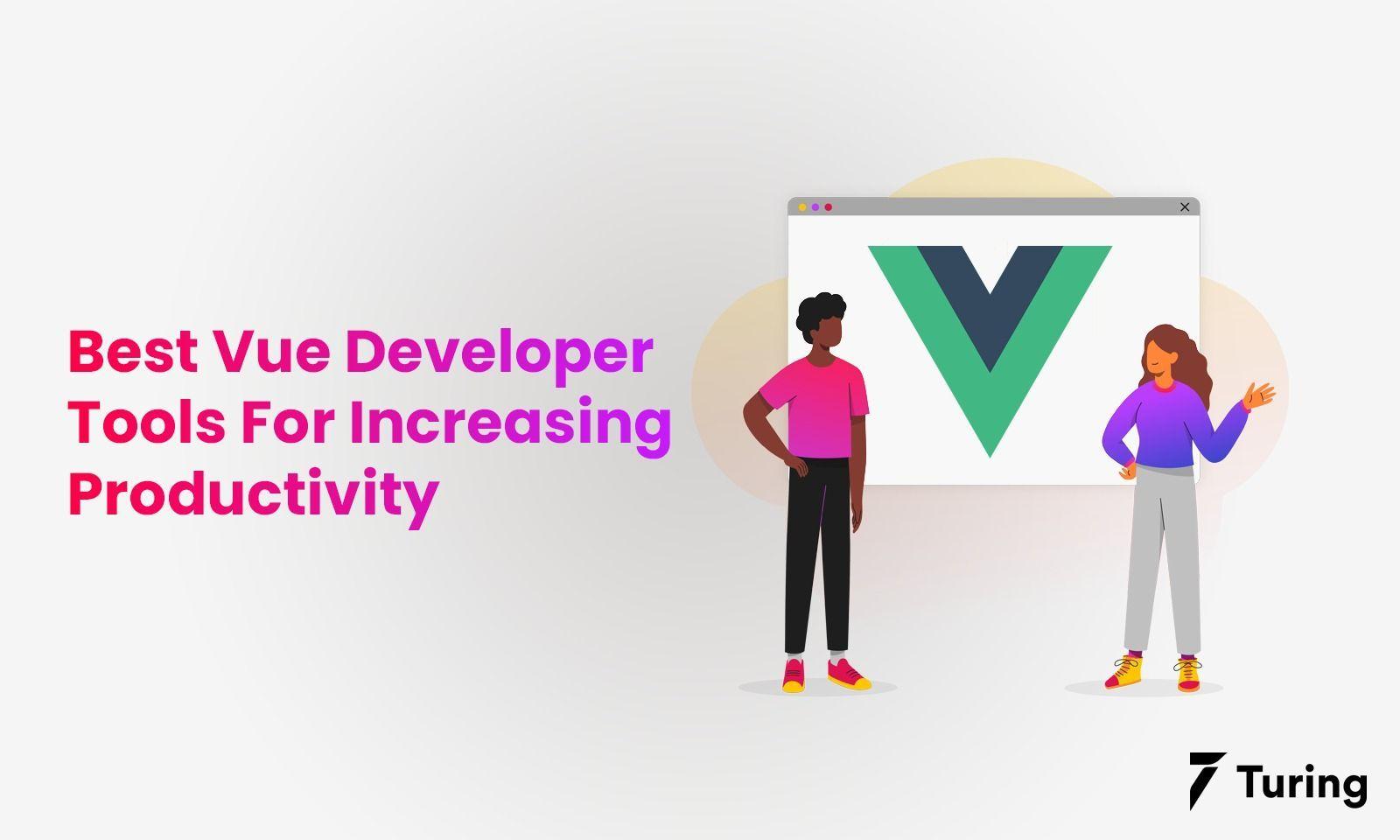 Vue.js is widely known for its supportive community, for being lightweight, and for being backed by numerous tools to support the development process. Vue developer tools make developers’ lives especially easy. They effectively reduce the time they need to spend on coding and creating high-end platforms without compromising on user experience. There are many Vue developer tools to choose from but not all of them are worth the time. So, here is a curation of the best developer tools to use for Vue.js projects. 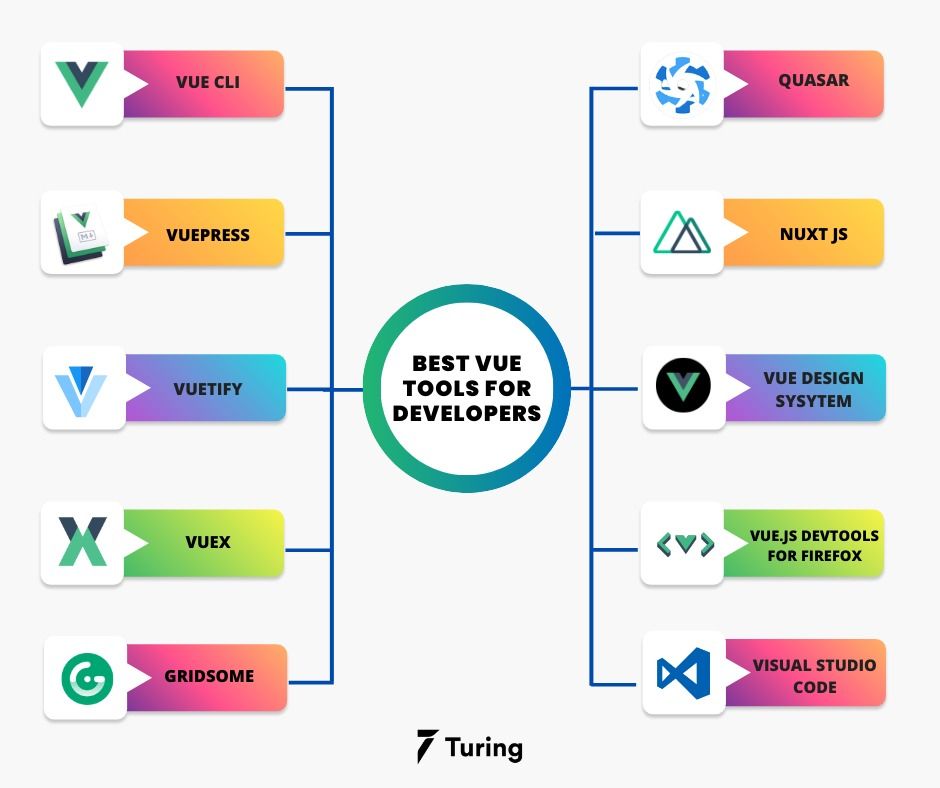 CLI tools are commonly used in JavaScript as they are productive. The Vue CLI tool is known for speeding up the Vue development process. It offers features like instant prototyping that enables developers to try out innovative ideas without building every project from scratch.

Developers who are Vue experts can greatly benefit from Vue CLI and create applications seamlessly. The tool allows interactive project scaffolding to accelerate development. With Vue CLI, the runtime dependency is upgradable, extensible through plugins, and configurable through a project configuration file.

Vue CLI also offers a complete graphical user interface for Vue.js project creation and management. Not only that, it comes with a series of official plugins that can easily integrate the right tools in front-end development.

Nuxt JS is one of the top tools for Vue.js development. It is among the best front-end frameworks as it provides an intuitive development experience.

It helps in creating a boilerplate for projects and enables developers to create various types of applications. It is ideal for creating single-page applications, server-side rendered platforms, progressive web applications, and static sites.

With Nuxt, you can begin coding with zero configuration and enable easy data fetching from any source in the Vue component. It has a whole module ecosystem that comprises over 50 modules to accelerate the development process.

With the help of these modules, developers can easily generate sitemap, add Google Analytics, and get PWA benefits. It also allows auto-import of components and lets developers build SEO-friendly platforms.

VuePress has a static site generator and theming system that are both powered by Vue. It is one of the best Vue.js dev tools for static site generation. It was initially developed for creating technical documentation but soon evolved into a powerful compact CMS.

With the help of VuePress, you can leverage Vue inside Markdown files, make custom themes from default ones, and create new ones from scratch. It also allows service worker integration, Google Analytics integration, and supports multiple languages.

With its default theme, you get a responsive layout, customizable navigation bar, sidebar, optional homepage, and auto-generated page edit and GitHub Links. Being relatively new to the competition, VuePress is still in progress to accommodate more features for developers’ convenience. 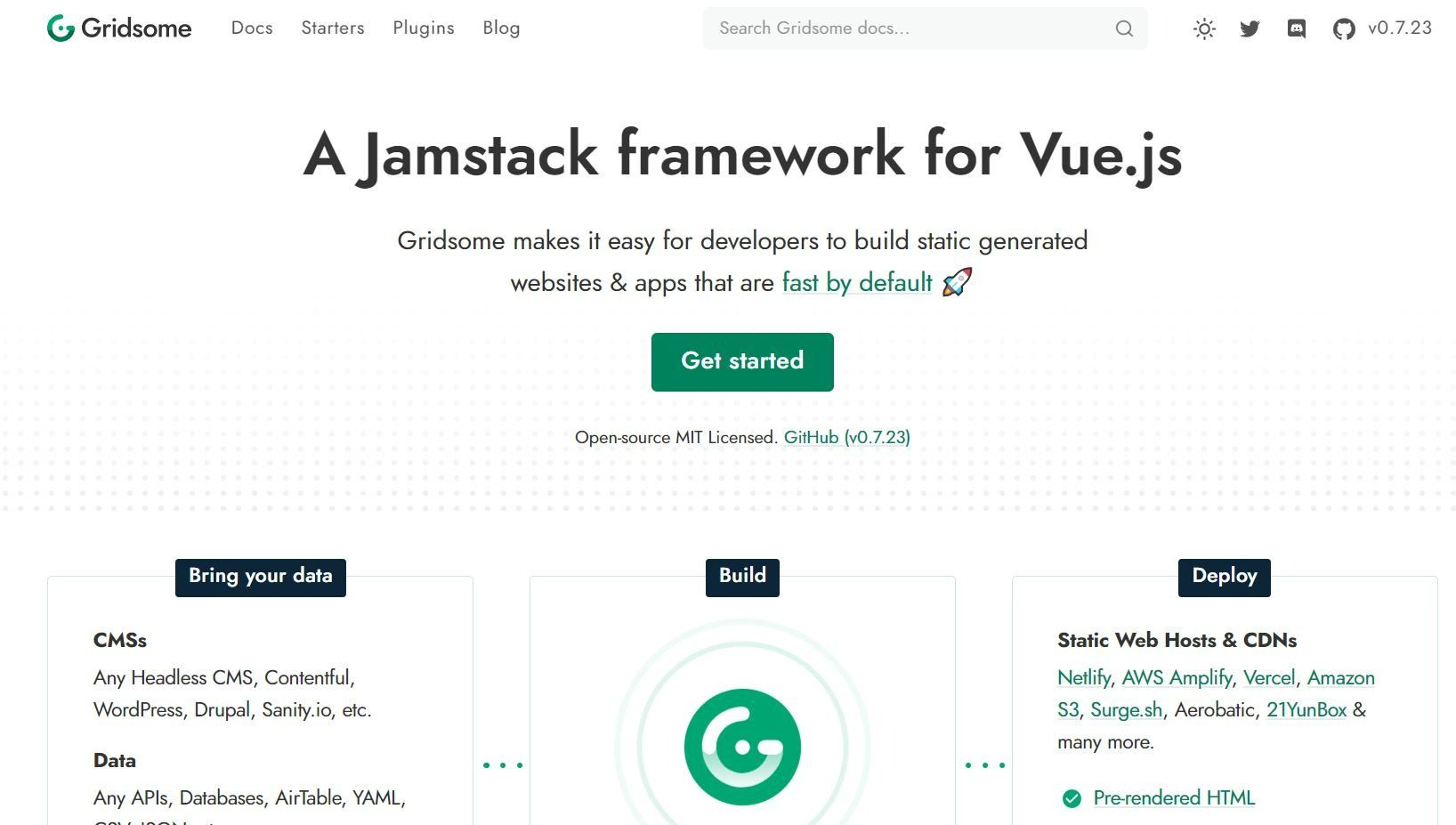 Gridsome is called the modern site generator for Vue.js. It enables developers to create static apps and websites that are fast and responsive. It is a great tool for Vue.js development and has a reputation for being quick by default to support complex developments.

It is known for generating progressive web apps and enables easy and safe deployment by allowing developers to deploy a complete site on CDN. Gridsome is capable of handling millions of hits without breaking. It relies on the potential of static site generation, APIs, and JavaScript to build Jamstack websites that are responsive at both ends.

Vuex was created to solve the state management issue faced by a majority of developers. This Vue extension is a state management pattern and library for Vue.js apps. The purpose of Vuex is to work as a central data store for every part of a front-end application.

It contains different, yet well-coordinated, components that can create a fully functioning front-end application. In total, Vuex contains four objects that can handle a complete system: state, getters, mutations, and actions. 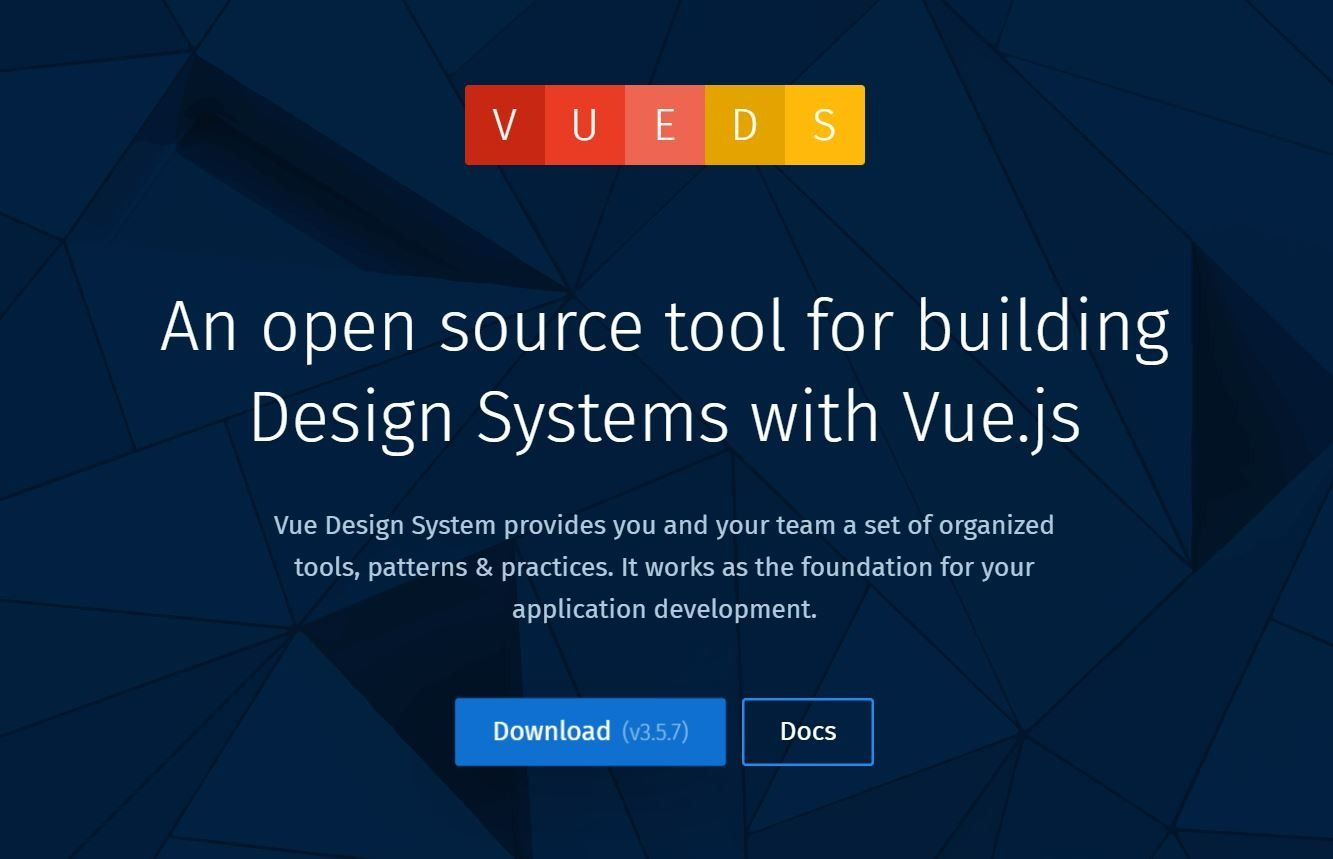 The Vue Design System is one of the top Vue tools to use. It is an open-source tool that builds UI design systems for Vue.js. It offers various patterns, tools, and practices that can lay the foundation for development projects. The design system comes with a variety of features such as: 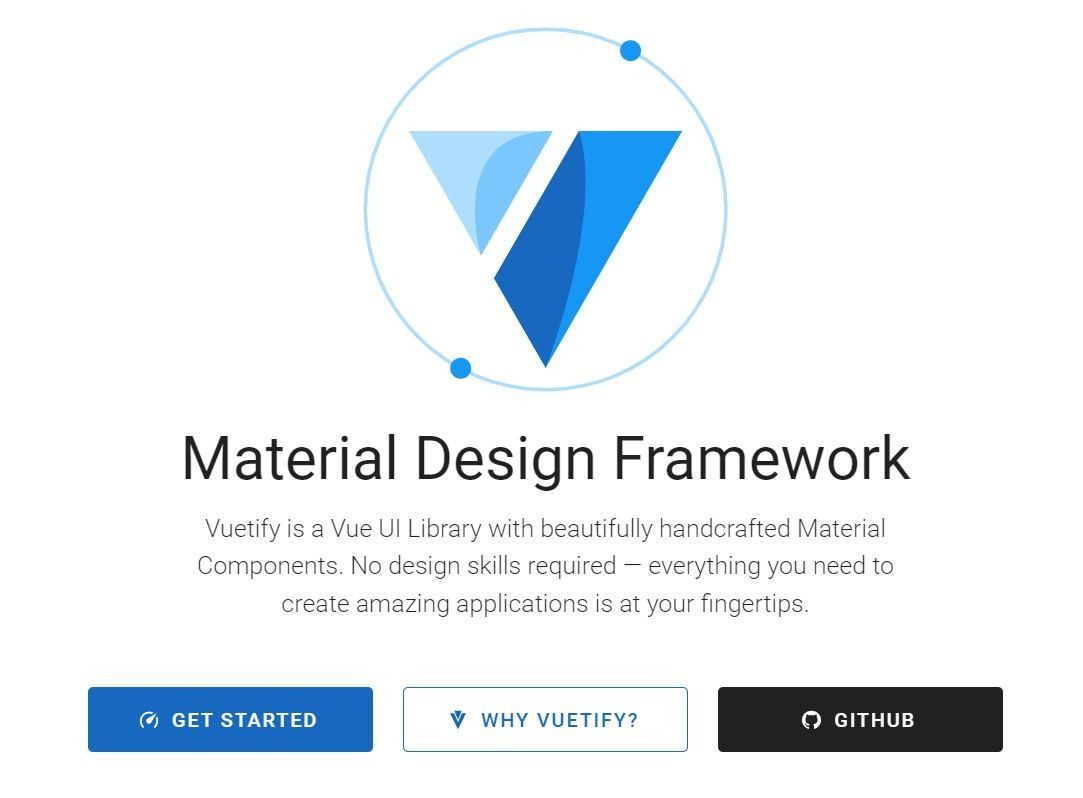 Vuetify is one of the best Vue tools in terms of offering a great Vue library. It can be described as a material design framework that doesn't require designing skills. It was first released in 2014, and since then, its popularity has only grown.

Vuetify is loved by developers for its UI components that allow them to come up with modules that they can freely use or re-use throughout the application. They can use the components to create mobile apps, single-page apps, and even progressive web apps.

The tool allows the creation of a completely new app and also provides the option of adding it to the existing one. Vuetify comes in both the free and premium versions, with the latter offering advanced themes.

The Vue.js dev tool is among the most sought-after Firefox Vue dev tools. It is a Firefox browser extension that works by extending the developer tools with an additional Vue tab to better analyze applications and debug them without a hefty time investment. It is a highly-rated extension that allows developers to inspect states, components, events, etc., to detect bugs and remove them in a single go.

Quasar is a Vue.js framework that enables developers to create high-performance and superior quality UI for websites and applications in a short span of time. It is easily extendable and customizable and is one of the most performance-focused frameworks.

It offers support for every build mode, including PWA, SPA, desktop, mobile apps, SSR, and browser extensions. It also offers a great developer experience through integration with their CLI.

Quasar is popular for allowing developers to write apps in a single code for various platforms. It integrates itself into CSS, HTML, and JavaScript minification, improves accessibility, and enables code limiting to save developers time for more important tasks.

Visual Studio Code or VS Code is a source code editor which helps in controlling and managing various development operations. It is an open-source code editor used for various programming languages including Vue.Js.

This simple tool helps in writing code, running tests, and debugging your program in no time. It is a cross-platform editor which can run on Windows, Linux, and macOS. Its IntelliSense feature offers smart competitions based on imported modules, function definitions, and variable types. It is a highly customizable tool that allows extensions to various themes, languages, debuggers, etc.

There are many Vue tools available for Vue.js developers, but choosing them according to the needs of a given project is very important. Remember that it’s crucial to opt for tools that are highly trusted and offer great value to the development project at hand.

For Vue.JS developers, we have offered the best tools to consider and adopt for increased performance and speed without compromising on the quality of projects. Explore these high-end tools and incorporate the best ones for your undertaking.

Before we deep dive in the list of best CI/CD tools, let's first understand why...

As Kubernetes becomes the industry standard for container orchestration...

The CSS tools (Cascading Style Sheets) are designer tools that define the style and format...

Is Vue.js a popular framework?

Vue.js is a popular JavaScript framework, after ReactJS, and is definitely the go-to for new developers.

Is it hard to become a Vue.JS developer?

Vue.JS is known for its easy learning curve and is one of the best choices for new programmers. If you have basic development knowledge, you can learn Vue.JS in just a few days and become a Vue.JS developer.

What are Vue dev tools?

Which one is the best Vue.JS tool?

How to use Vue tools?

You can use Vue tools in three simple steps. First, open the browser and navigate to the Vue tab. Next, select the component to work on, and finally, edit the data as required.

When it comes to comparing Vue vs React, the latter is often seen as a more powerful contender. This is because React is among the leading frameworks of 2022. On the other hand, Vue enjoys a fair share of popularity as it is quite easy to learn, and is comparatively fast for building simple development projects.