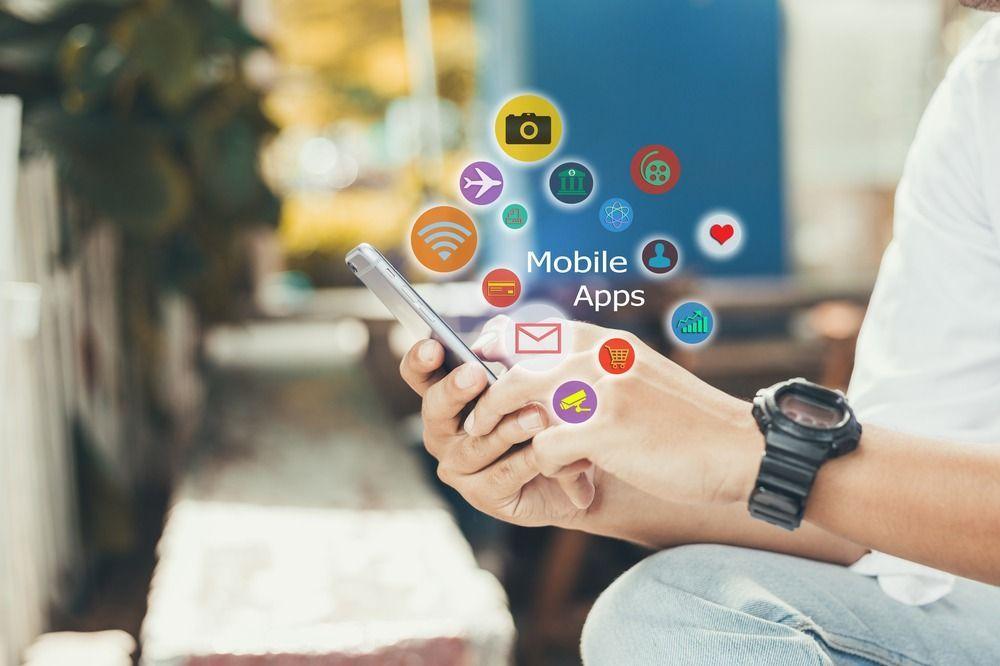 Mobile app development can be defined as the process of creating software for mobile devices, commonly for iOS and Android. These applications can be downloaded directly from app stores, be preinstalled, or accessed through web browsers on mobile devices. Mobile app development is rapidly growing as it is extensively used across industries. According to a report, the total app market revenue is pegged to hit a huge $430.90 bn in 2022.

There’s a wide range of mobile app development tools to suit different requirements. In this article, we’ll be looking closely at some of the best options for developers and briefly touch on the types of mobile applications.

There are various tools for app developers to create powerful mobile applications. Let’s look at some of the popular choices.

Android Studio was launched by Google in 2013 as an official integrated development environment specifically for the Android operating system. It is built on the IntelliJ IDEA software by JetBrains and is designed for Android mobile app development only. It is a replacement for Eclipse Android Development Tools, which was the primary tool for Android development.

It can be downloaded on all types of operating systems like Windows, Linux, and macOS. It also supports all kinds of programming languages supported by IntelliJ. It has Gradle based build support and supports building Wear OS apps. The best feature is that it provides an Android emulator which allows developers to easily visualize the app and debug it. Once completed, it can be easily published on the Google Play Store.

A Ruby-based open-source framework called Rhodes is included with RhoMobile. This enables developers to create data-centric, cross-platform native apps that work across a wide array of handsets and operating systems.

Its anatomy resembles that of PhoneGap. Symbian, iPhone, Android, Windows Mobile, and RIM are among the operating systems it can be ported to. Web technologies like HTML5, CSS3, and JavaScript are joined by Ruby.

RhoMobile's framework requires just a single line of code to be written. Afterward, you can create applications for the majority of the popular cell phones using this code. Native apps are ideal for working with the hardware that is currently available in order to get the job done quickly, easily, and accurately.

To keep all the app data up to date on users' handheld devices, RhoMobile includes a hosted development environment called RhoHub, and RhoSync, which can be used as a standalone server.

If you're worried about needing to BYOD (Bring Your Own Device) because of data security concerns, automatic data encryption will allay that concern. Its Object Relational Mapper enables automatic synchronization of backend data. It also offers offline data accessibility and app synchronization.

However, RhoMobile limits the ability of Windows Mobile/CE to use RFID plugins. If it had been more open-source, it would have become more well-known.

Developed by Nitobi, Apache Cordova is one of the best mobile app development tools. Formerly known as PhoneGap, it was later renamed Apache Cordova by Adobe. It is a reliable mobile app development framework as it enables developers to create a hybrid web application using various languages like CSS3, HTML5, and JavaScript. It does not rely on specific operating systems like Android, iOS, or Windows OS.

The advantage of being hybrid is that it is neither completely based on mobile nor the web. It renders the content in a native WebView, which is an application where content based on the web is displayed within a native application.

Unlike other frameworks, Xamarin's C# codebase enables you to use native IDEs, APIs, and languages. Additionally, it is generally applicable to numerous platforms, whereas Xamarin Studio already has built-in Git connectivity.

Xamarin provides quality monitoring and functionality testing across a range of devices. It has an Android emulator included. Additionally, it offers a few sample apps to get you up and running quickly.

Three-fourths of the code can be distributed via widely-used mobile platforms. As a result, by adopting Xamarin, you reduce both the time to market and the cost of development. However, open-source libraries for iOS and Android continue to have interoperability problems.

The cross-platform, open-source mobile framework called MonoCross uses C#, Microsoft.NET, and the Mono framework to create applications that run on several platforms, including Android smartphones and tablets, iPads, iPhones, and WebKit-enabled devices. By adjusting the platform container and the view or user interface, you can maintain the application, model, and controller coding across multiple platforms while attempting to deliver a native experience across the major platforms.

Some of the features of HeadSpin are:

Buddy is a software based on the web that’s primarily designed for Git developers for continuous integration and delivery. It is used for testing, building, and deploying the code of an application directly from GitLab, GitHub, and Bitbucket.

Some of the features are:

How to decide on a mobile app development platform

Mobile app development can often be challenging. There are several issues commonly faced by developers, some of which are listed below:

As mentioned, there are different platforms for developing mobile applications but a few factors need to be taken into consideration when deciding on a platform. Some of these are:

According to a mobile operating system market share worldwide report, approximately 70 percent of the global market is occupied by Android. 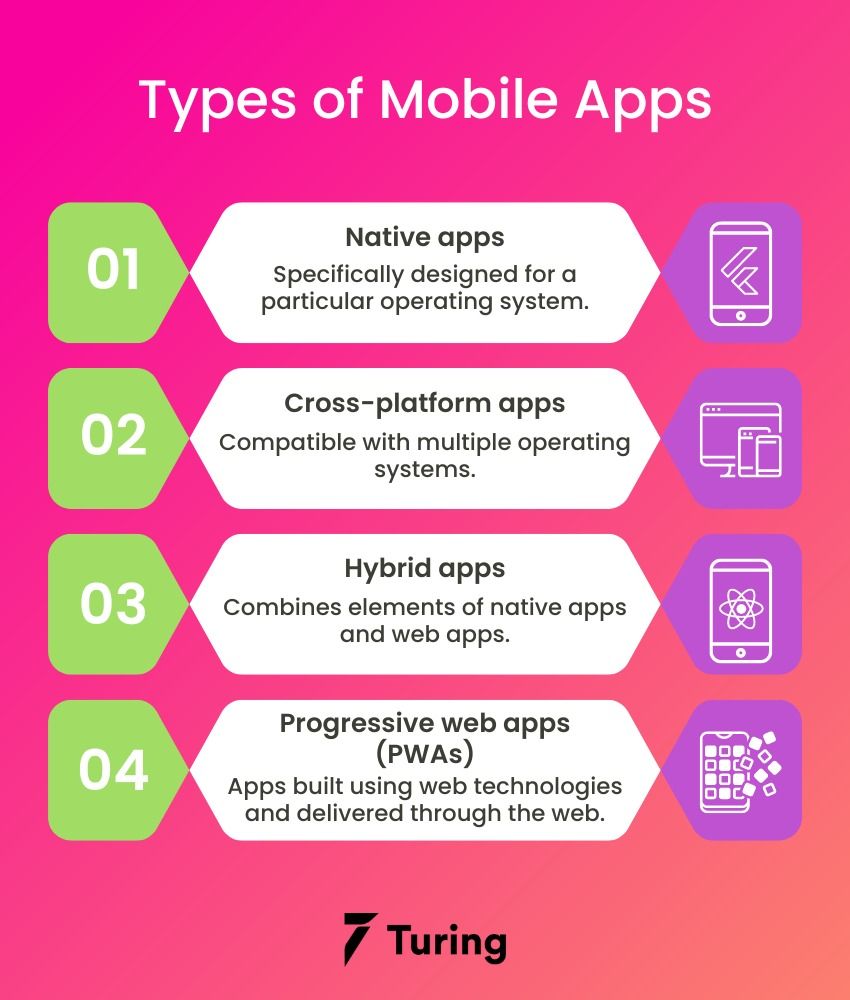 In native app development, apps are specifically designed for a particular operating system. They are usually written in one type of programming language for a specific OS. For example, Java is often used for Android whereas Swift is used for iOS.

Native apps leverage all the possible features of an operating system by directly accessing various hardware components, including GPS, camera, speaker, microphone, etc. As a result, they are the most reliable and provide fast rendering with a great user experience.

Although they have many benefits, there is one major drawback to developing native apps: it requires separate code to be written if the app has to run on multiple platforms. For instance, developers need to write different codes for Android and iOS, which can be a tedious and time-consuming task. Thus, they consume time and resources, making them less popular nowadays.

One of the best methods for creating low-cost custom apps with safe, dependable, and simple-to-maintain features is cross-platform development. There are many frameworks available for the same which aid in achieving the look, feel, and user experience of a native app.

A cross-platform mobile app now has greater value because mobile developers need to access the widest user base possible, regardless of their preferred platform. A native rendering engine is used in the cross-platform development strategy. It provides seamless functionality, simple deployment, and affordable manufacturing.

Some advantages of using cross-platform mobile apps are:

1. Cost-effective: It's possible to argue both sides of the native vs. cross-platform app debate, but the latter comes out on top in terms of cost-effectiveness. It is the best option when a company has to simultaneously target an audience across various platforms. Additionally, the majority of cross-platform projects only need half the personnel that native projects do, saving massive resources.

2. Reusable: With cross-platform apps, developers no longer need to write different codes for each operating system. Instead, they can port the code to various platforms using a shared codebase.

A few disadvantages of cross-platform mobile apps are:

1. Complex development process: An application that would be well-suited to a few platforms requires a talented developer. When implementing a complex interface and features, it’s important to maintain all the minor variations between operating systems and the hardware they run on.

Between native and online applications, hybrid apps represent the ideal balance. Backend code and a native viewer that may be downloaded to view the backend in a web view are included. For instance, WebView is used in Android and WKWebView is used in iOS to display hybrid apps.

Instead of requiring a browser to access them, hybrid mobile apps can benefit from add-ons like Apache Cordova or Ionic's Capacitor. Developers have access to platform native functionalities, thanks to the plugin.

When compared to native apps, hybrid app development is far more time- and cost-efficient. The code can be created once and used across platforms. Such types of apps also allow for code exchange and take less time to develop. User experience and performance are quite similar to those of native apps.

Some drawbacks of hybrid mobile apps are:

1. Poor UX: Theoretically, excellent UX and navigation patterns are attainable from a visual perspective. However, putting this into reality takes time and effort.

2. Slow performance: Although they cost less to develop than native apps, they can run poorly.

A website that functions like a native mobile app is known as a progressive web app. PWAs are similar to hybrid apps. They don't require downloading from an app store because they work in a browser. The apps are still accessible from the home screen. The user experience that is optimized for each platform determines how they make progress.

There’s no need to employ a particular kind of developer for PWAs because they don’t have any specific languages or frameworks. They are both Angular and React-compatible. E-commerce applications are where this form of app coding is most frequently used.

Tools for PWAs are:

In this article, we covered the various parameters to be considered when deciding the platform for mobile applications. We also discussed the top tools and technologies for mobile app development like RhoMobile, Xamarin, MonoCross, HeadSpin, Buddy, etc. Out of all the types of mobile apps, we saw that cross-platform apps are the best as they provide a single codebase for a mobile app to run on all types of platforms or devices.

How to Create a Decentralized Application (dApp) On the Blockchain

A decentralized application, commonly abbreviated as dApp, is software built upon a...

How to Reduce Bias in Artificial Intelligence

It may take years to eradicate human bias, but preventing bias in AI isn’t a daunting task...

The process to develop an ideal mobile app includes 1. An out-of-the-box idea for a solid foundation, 2. Research and plan, 3. Wireframe of the app...

Python programming language is widely used for machine learning as it is one of the easiest...

How to decide the type of mobile app?

The most common type of mobile app is a cross-platform one as it can run on all devices or operating systems without having to rewrite the code separately for each operating system.

Is there any specific programming language for mobile app development?

No. It depends on the tool that you will be using for mobile app development.

What is the similarity between hybrid and cross-platform apps?

The only similarity between these two types of apps is that they both utilize a single codebase.