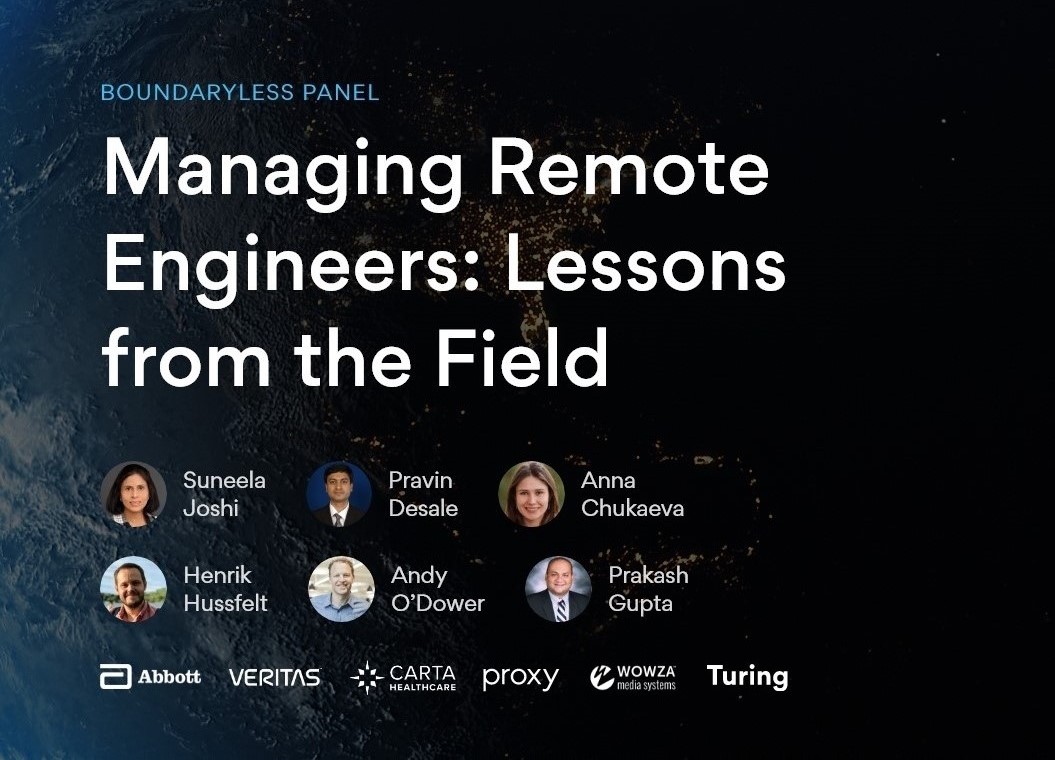 A panel of high-profile engineering leaders joined Turing.com CRO Prakash Gupta for the second session of the Turing Boundaryless: #BuildFromAnywhere event on 18 February 2021 to share their experiences managing remote developers during the Covid-19 pandemic.

From challenges to solutions, the panelists touched upon various issues regarding remote teams. They also revealed their first preference when it comes to fully-remote or hybrid. Here are the key takeaways from the session in case you missed it.

Describing the hurdles that his team faced during the early months of the pandemic, Pravin said. However, his organization had to deal with many challenges starting from product development processes to customers’ data safety. They learned a lot out of those problems.

“I think it has made our company better for the future. There’s no question about it,” Pravin said.

Expressing similar thoughts, Suneela said: “We were forced to take on remote, but it has worked out well.”

She also explained how her company tried a mix of remote and office-going employees to mitigate the challenges.

Henrik, who was one of Proxy’s first remote engineers, while sharing his experience, said: “When Covid hit, the whole company had to do what we did every day. But getting the organization to get to the same state took quite a while.”

Andy, who is now with live streaming platform Wowza, told the audience that they had to make some changes and break some old tools and some old habits as part of the leadership team.

“I think we were able to grow the business certainly and help customers in a time of need, but it did require both company changes and a roadmap change in our product,” he said.

During her turn, Anna said that the challenges for her organization were all about the people. “We need to build trust. And trust is hard to build, especially if somebody is remote and in a different time zone. How are we going to do that?” she said. The answer she explained was in listening to your team members and implementing their feedback.

Moving ahead, the speakers also spoke about the many steps that they took to overcome the initial challenges of remote work.

According to Henrik, he and his team took some ideas from GitLab’s guidebook and implemented them in their organization. He suggested anyone who needs to understand how to run a remote organization should look at that guidebook. You can find the link to the guidebook here.

Talking about distributed teams, Andy said that companies needed a mindset shift when it comes to remote first. He added that previously organizations used to hire candidates keeping the physical office model in mind, but now they must recruit people keeping remote work at the forefront.

While Pravin spoke about the importance of a sense of belonging and purpose at the individual engineer level, Suneela shed light on factors such as flexibility and empathy for remote employees.

Adding to these two speakers’ views, Anna talked about the significance of feedback in a distributed team and how she implemented a program to collect the proper feedback to solve many of the problems related to remote teams.

The session ended with a small poll where most of the panelists barring Henrik, said they expect their organizations to go for a hybrid remote set-up in a post-Covid world. Henrik voted in favor of a fully-remote setup.

You can watch the entire session on Turing’s YouTube channel and let us know in the comment section what you liked the most about the conversation.

This post concludes our recap of the second of the four sessions of the Turing Boundaryless: #BuildFromAnywhere event. Keep checking this space for highlights from the rest of the sessions.