React is a JavaScript open-source library backed by Meta (formally Facebook). React apps are one of the most popular web applications globally, with over 180K stars on GitHub, 1K+ contributors, and more than 10k companies using React in their tech stack.

React JS library is declarative, effective, and adaptable. It enables you to create reusable components, making your code easier to understand and maintain. This article will discuss the different types of web applications built using React JS and the popular platforms incorporated with React.

What makes React JS so popular? One significant benefit is that it enables developers to create reusable components. Developers can quickly generate and use tiny bits of code and combine them to create larger apps.

Another reason for React's popularity is that it is an excellent choice to develop variety of apps. React can be used to build almost anything, from basic single-page apps to large enterprise-level systems.

Let's understand why React is quickly becoming the primary choice for developers looking to build a web application.

There are several reasons to choose react for web app development. Some of the advantages of using React.JS elements are: 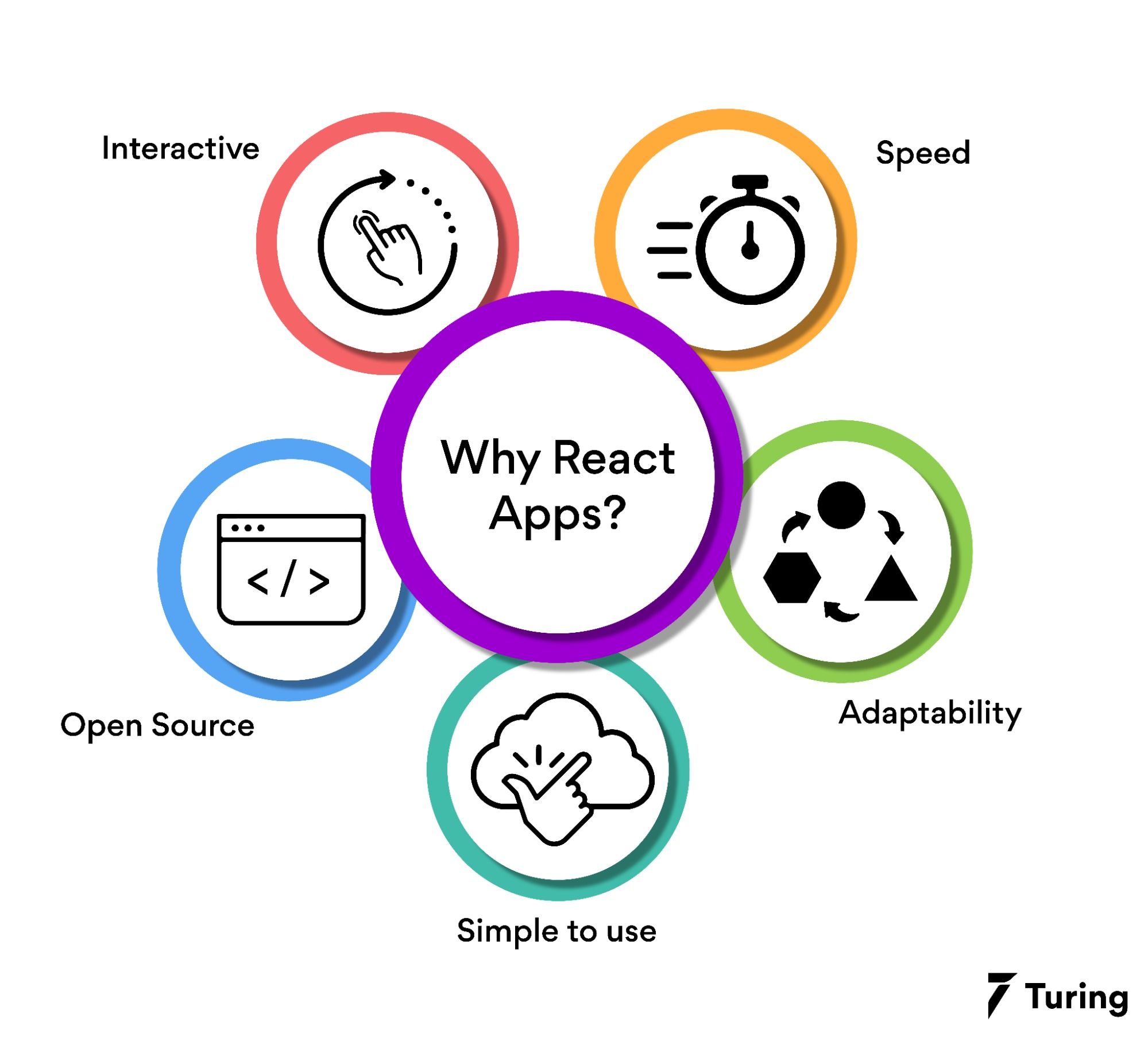 Speed: When creating a web application, speed is one of the most critical factors. React uses virtual DOM, which allows it to achieve a great rate. Your web app will load quickly and respond swiftly to user interaction.

Adaptability: Another incentive to choose React is its adaptability. While creating your web app, react gives you many options. React can be used with a range of programming languages and can also be used with various libraries and frameworks, which means you can customize React to your specific requirements.

Simplicity: React is a very user-friendly framework that is simple to understand. It ensures that you can get started fast and efficiently by creating your web app.

Open-source: React is an open-source library with a vast developer community ready to assist and guide you. It offers an incredible resource, which helps in creating your web app.

These are just a few benefits of using React for web app development. If you're searching for a quick and adaptable web development tool, React will be the best choice.

To provide scalability, flexibility, and an improved user experience, a frontend framework must include several characteristics, and React.js has all of them, enabling application developers to be quick and dynamic. 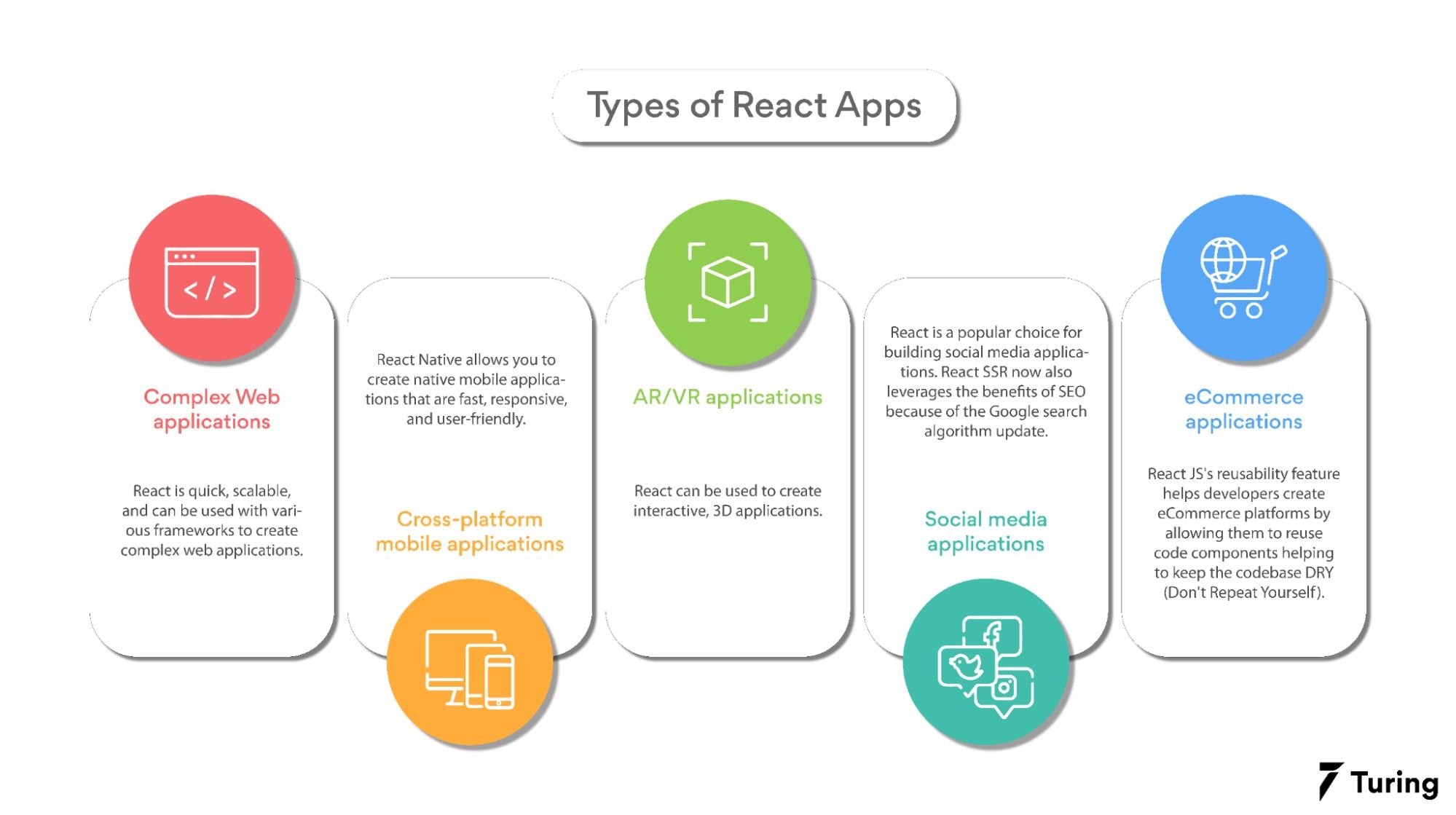 As outlined above, React.js can construct feature-rich, cross-platform apps that are quick, responsive, and versatile.

React JS is incorporated to create different types of web apps. A single-page application is commonly used to create a portfolio or an online storefront. React JS is also popular for designing reusable components and user interfaces and can be utilized to develop progressive web apps, which are websites that can be cached and accessed offline.

React is an excellent choice for building web applications that offer a rich user experience. React can be used with various frameworks to create complex web applications. It has been declared a component-based library that makes it simple to explain and design complex applications.

React is compatible with any backend, making it simple to add to any existing apps. All components of React are reusable, which helps to create complex web apps while keeping the look and feel consistent.

React Native allows you to create native mobile applications. With React Native, you can create applications that work both on iOS and Android devices.React Native is built on the React library and has many built-in components and APIs.

These mobile applications are developed using the same fundamental UI building blocks as regular iOS and Android applications. This makes it easy for React Developers to create cross-platform applications.

These attributes of React help in creating 3D scenes. It also helps in interacting and rendering 3D objects. These VR applications are compatible with various VR devices, including the Oculus Rift, HTC Vive, and Samsung Gear VR.

React renders the components on the server-side, which makes the initial load time of the page faster because the server is doing the heavy lifting.

Using SPA, React updates the sections of the page that need to be updated, giving a more responsive user experience. For example, if someone clicks the like button on a social media post, React will only update the like count and the color of the button instead of the whole page reloading.

React SSR now also leverages the benefits of SEO because of the Google search algorithm update.

React is a popular choice for building eCommerce applications. The reason is the capability of React JS to construct a modular design system, which means React components are independent of each other. Each member can be independently updated and maintained without affecting the others. This simplifies the development and testing of React apps.

Keeping all of the reasons and types of React apps in mind, let's look at some of the most commonly used React app for commercial, personal, and other purposes.

React's approach is quick and can grow to large applications, making it the first choice for many developers when building web app interfaces for major corporations.

Dropbox migrated to React JS when the latter was gaining popularity among app developers.

Dropbox makes excellent use of the wealth resources that are part of React JS, which significantly contributes to the success of this outstanding cloud-based storage service and online backup solution.

ReactJS is used throughout Codeacademy, from the header to the menu and navigation. It is a logical solution that packs all the components for the various elements.

According to Codeacademy, some of the advantages of React are that it is battle-tested, makes SEO easier, is compatible with old code, and is flexible enough for the future. It also encourages community formation and avoids clichés.

Netflix also uses React, notably on their Gibbon platform, which is utilized for low-performance TV devices rather than the DOM used in web browsers. Significant reasons like notably start-up speed, runtime performance, and modularity made them choose React.

The New York Times launched a fantastic project that mimics alternative styles of celebrities on the Oscar red carpet. Naturally, the UI for this project was created in React and allowed users to filter a gallery of different images. The project's re-rendering is among the many outstanding things they appreciate about React JS.

Meta is the tech behemoth behind React; thus, it's no surprise that they also use the library for their platforms. Meta employs React for Facebook and Instagram web platforms.

React JS is ideal for easy learning and maintenance of web applications boosting the user experience.

React's vast and growing community caters to the needs of developers for learning and developing complex React apps and React Native platforms.

How to Build a Shopify App with Node JS: The Ultimate Guide

To successfully start an eCommerce business, you first need to develop an efficient online store...

What kind of influence React has on the software development industry?

React has had a significant impact on the software development industry. It has enabled developers to create cross-platform applications that can be used on multiple devices. This has made it easier for companies to develop and deploy applications.

Is Netflix built on React?

A part of it, yes. Netflix built its low-performance TV platform using React-Gibbon API. They chose to React due to its one-way data stream and formal approach to user interface development.

Why are the largest companies using React?

There are several reasons for which large companies choose React; it provides cross-platform development, speed, and an efficient way to develop mobile apps.

What are the types of React apps?

Many internet giants choose apps because of React's flexibility, meaning that React can be used to create user interfaces for various devices, including web applications, mobile apps, and even virtual reality applications.