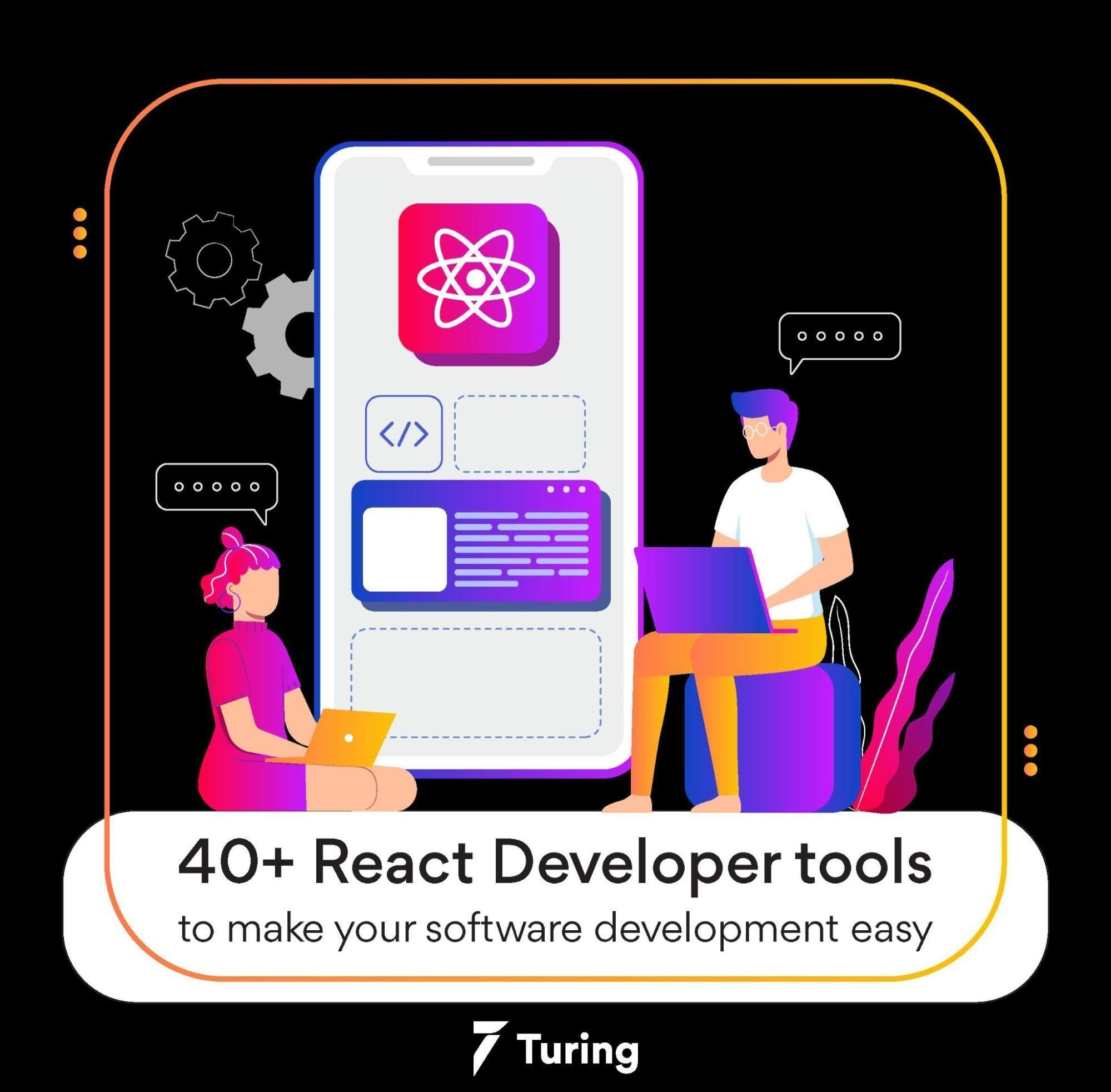 React, aka React.js or ReactJS, is a JavaScript-based library that enables developers to create user interfaces efficiently. This process can be simplified even more, thanks to a ton of open-source React developer tools.

Big companies like Airbnb, Dropbox, Walmart, Tesla, etc., use React in JavaScript as well as in its native form. Launched in 2013 and supporting about 24 JavaScript-based frameworks, React is worth learning for the armies of developers worldwide.

Maintained by Meta, React’s developer tools can ease the software development process, thus increasing productivity. The tools are a set of add-ons, or in technical terms, extensions or plugins that make the React development environment easy to use.

Why use React dev tools?

There’s no mandate that says developers must use ReactJS tools. However, they’re considered a good choice regardless. Why? Because React developer tools reduce possible hiccups and deliver the following benefits for software development: 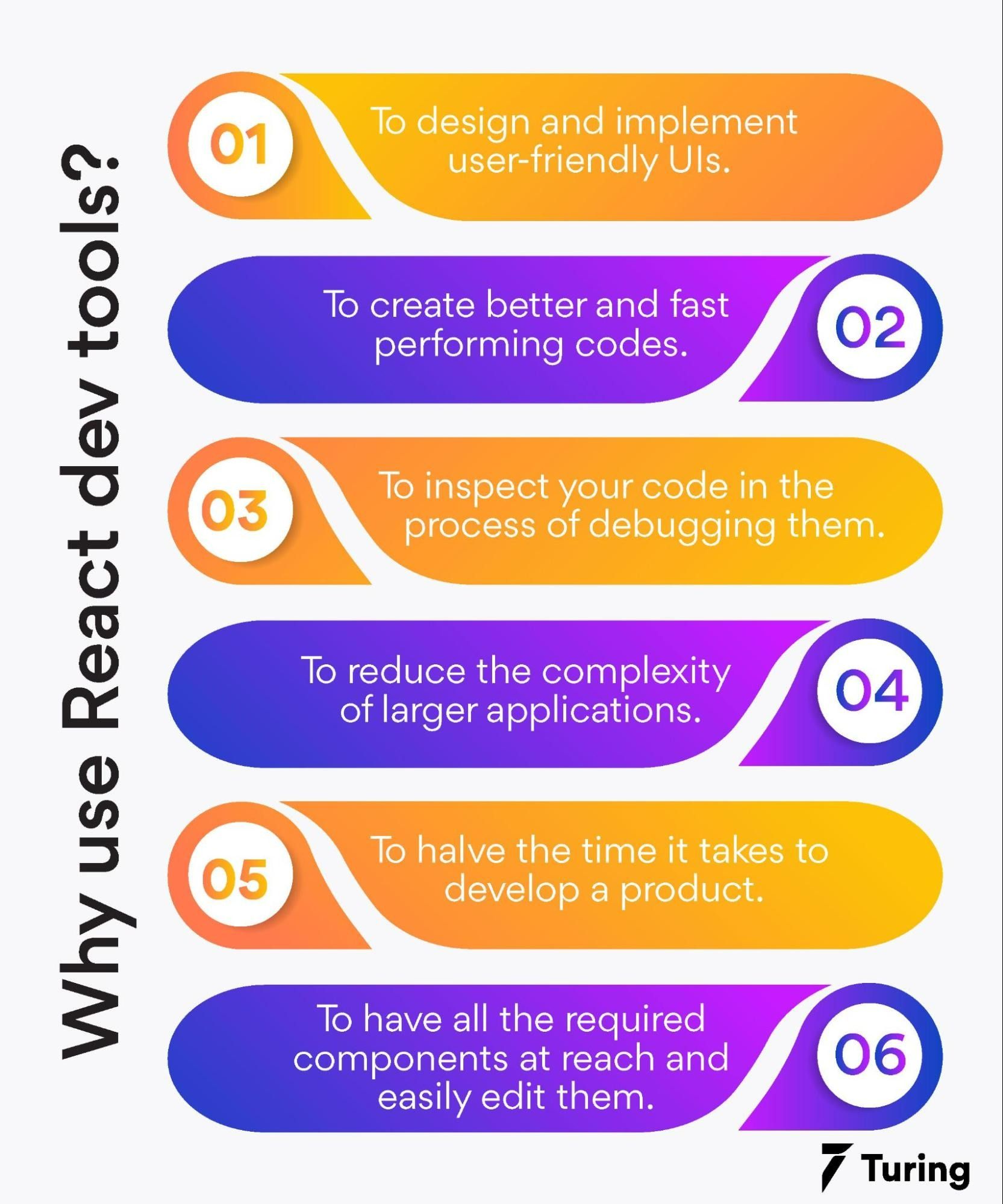 How do React tools stack up against their counterparts?

Since deployment, React, along with its multitude of tools, has helped developers to create single pages and complex applications. Here are some important highlights: 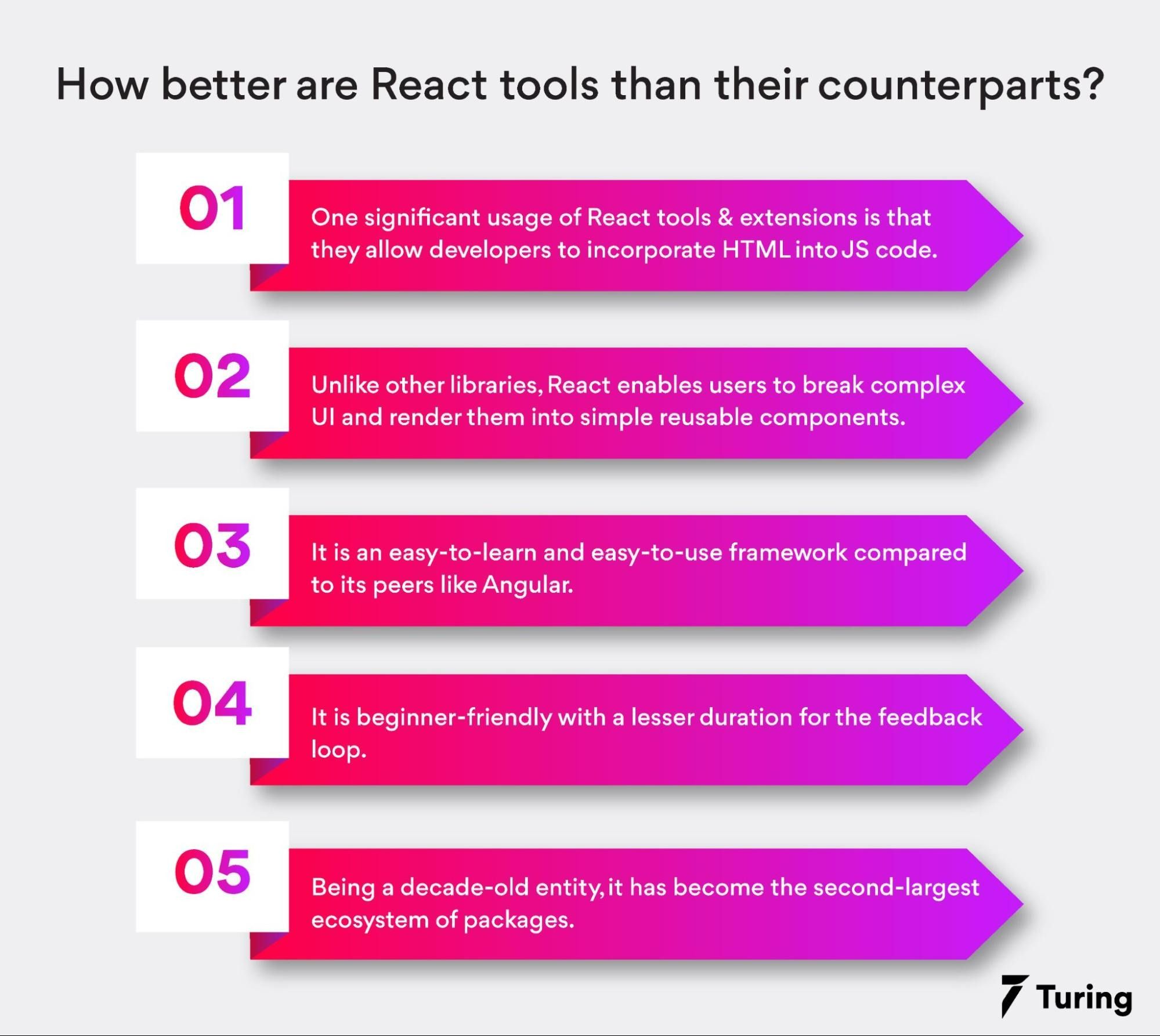 These points are courtesy the 2020 State of JavaScript report that says user satisfaction with React stands tall at 70%.

The tool requirements of each developer and business depend upon the projects they are handling. However, setting up a React working environment with suitable React dev tools caters to ease of development. The best browsers to enhance productivity with React include:

Developers can choose from a wide range of React dev tools for their software development toolkit, right from designing the wireframe to testing or debugging code.

These ReactJS tools can be categorized under 4-5 broad titles, namely: 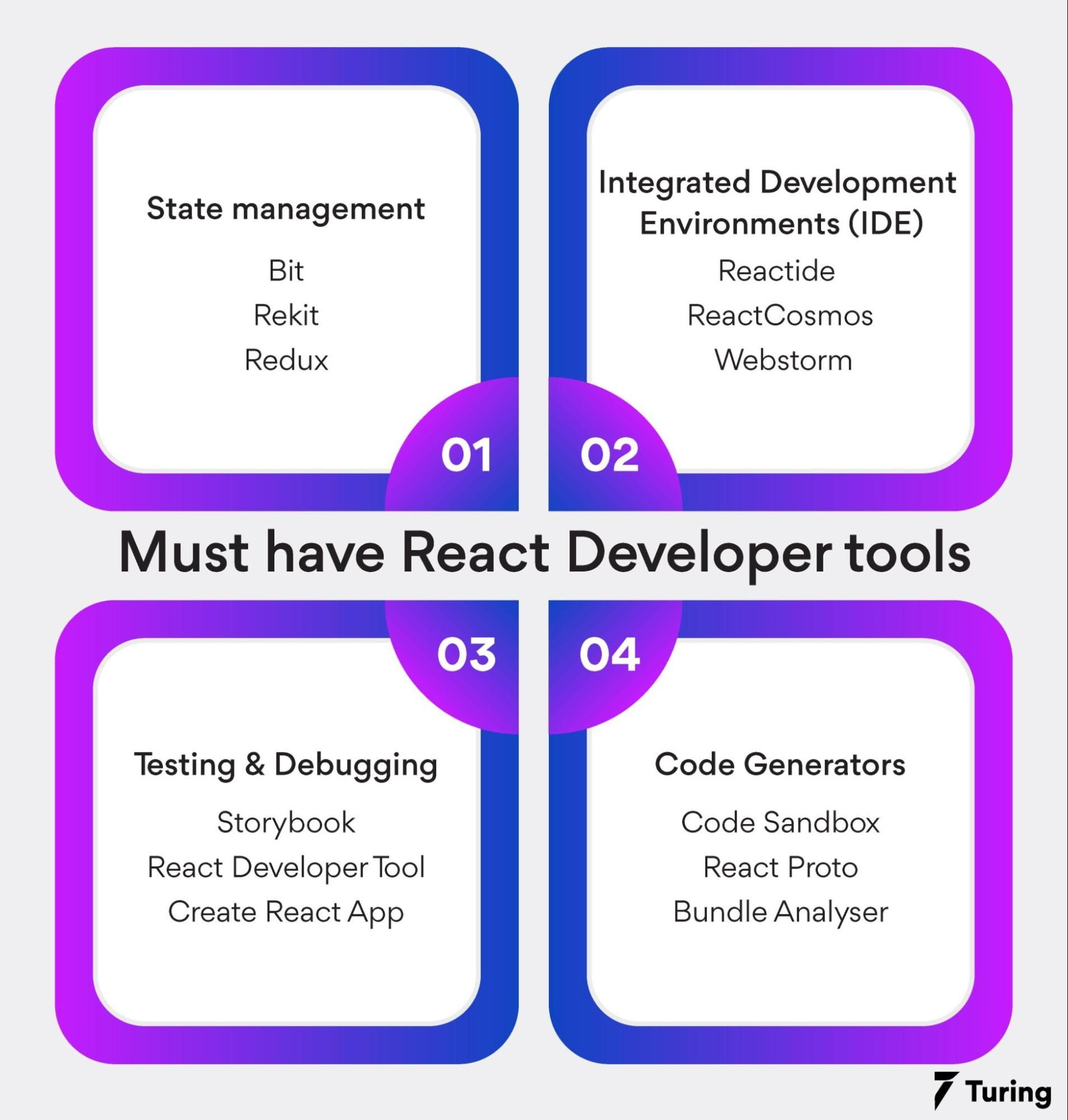 Here’s a look at the tools and their features.

It is an easy and fun command-line interface tool for coding, testing, and managing development. Its highlight is code-sharing and reuse across teams.

It is a complete solution to developer needs. It supports inbuilt project management use for better software development.

It is popular for its ability to track the application by storing data. It also has a built-in toolkit that makes coding its logic easy.

It is the first of React’s IDE. It is open-source and supports a custom browser simulator to run applications within.

It is also an IDE used for building reusable components. It enhances component design and creates real-time visualization of application evolution.

It is an IDE that makes software development in JavaScript easy. It offers a wide variety of features to do so.

It is a testing environment that enables rapid iteration testing of UI components. It creates and develops robust UIs.

It is an open-source debug tool. It allows developers to have a real-time view of component interaction.

Created by Facebook, it supports single-line commands and is quite popular among developers. It offers the best developing environment.

It is primarily a code editor that enables managing your whole developmental project at the push of a button.

It is a popular prototyping tool, as the name suggests. It sums up both the mock-up and coding phases, thus helping designers and developers.

It is a command-line interface and a webpack plugin. It also supports an interactive and zoomable visualization of the application.

The tools mentioned above are not exhaustive, by any means. There are many others available, including:

It is React in a flow-chart format. It is lightweight and allows application visualization with a live component hierarchy.

Also open-source, its functionality is out-of-the-box compared to the other tools. It supports a wide range of ready-to-use components.

It is the lighter version of Redux for beginner developers. It tracks the application state by using multiple store points.

Added to the React version in 2018, it allows users to access the application state without a class.

It builds static web applications and websites. It is easy to use as it comes with its configuration.

Also created by Facebook, it is a testing tool for UI components. It enables small, section-wise test runs.

It is a testing tool that can be paired with similar tools like Jest. It pulls up only relevant components and does separate testing for different sections.

It is a testing tool that is comparatively lightweight. Though seen as a replacement for Enzyme, it can only be used with Jest.

It is also an IDE but is highly flexible. It is curated by Microsoft and supports different developmental styles.

It is a widely used cascading style sheet (CSS) framework. As the name suggests, it is bootstrapped to the core.

It targets the development of isolated components in React. It also supports ES6, Flow, and TypeScript.

It helps developers create applications that are supported by multiple devices. It offers VR experiences across platforms.

It makes navigation across ReactJS easy. It lets beginners get started and acts as a built-in support mechanism.

It supports software development across platforms. It is built on ReactJS and React Native frameworks.

It is a React tool that supports full-on software development in JavaScript. It also supports Angular and Vue.

It is React’s first offline setup that offers the best developmental practices. It automates creation and testing with a zero-internet command-line interface.

It permits the easy import of components. Some of its components include Toggle, Button, Card, etc.

It is as interesting as its name in that it alerts developers of component re-rendering.

It enables form-building in React. It also simplifies the management of components.

It is short for Node package manager, a library that consists of third-party components to build interfaces.

It takes care of routing for ReactJS-based applications. It supports features like lazycode and handling location transitioning.

It is a ready-to-use animation library for React.

Other efficient but less widely-used developer tools and features include:

How to get React tools, and what is the cost?

React is the second oldest of its counterparts, namely, Angular and Vue. One of the reasons for its popularity among developers is that most of its extensions and tools are open-source or include a minimal cost, thus enabling budding developers to try them.

Most React developer tools are Chrome-downloadable at the click of a button.

React developer tools allow for hassle-free creation of interactive, complex, and creative UIs with the push of a switch. The above is a list of available React dev tools that can suit businesses of all levels.

In addition to choosing the best development environment, it is equally important to hire an efficient React developer to ensure a complete development process.

Developers are constantly trying to enhance their skill sets and React provides more than enough to satiate their tech hunger. With JavaScript pumping out new features/tools weekly, the future of React developer tools is promising.

Some of the notable sites that use React in its varied versions include apple.com, alibaba.com, and wix.com. A survey from Statista shows that this list will continue to grow as ReactJS overtook jQuery to become the most used framework among global software in the year 2021.

How do I use the React developer tool?

You can install React developer tools from any of the web stores. Once installed, you can find them on your browser’s dev tools.

Yes, React developer tools are safe, similar to React itself. However, users must keep in mind that they are open-source and can potentially contain malicious code that may compromise data privacy.

Is React a developer tool?

How do I activate React tools?

You can activate the pre-installed React tools from your browser’s Extensions section.

How do I use the React developer tool in Chrome?

As with any browser, you can use React developer tools in Chrome by downloading them from the Chrome Web Store