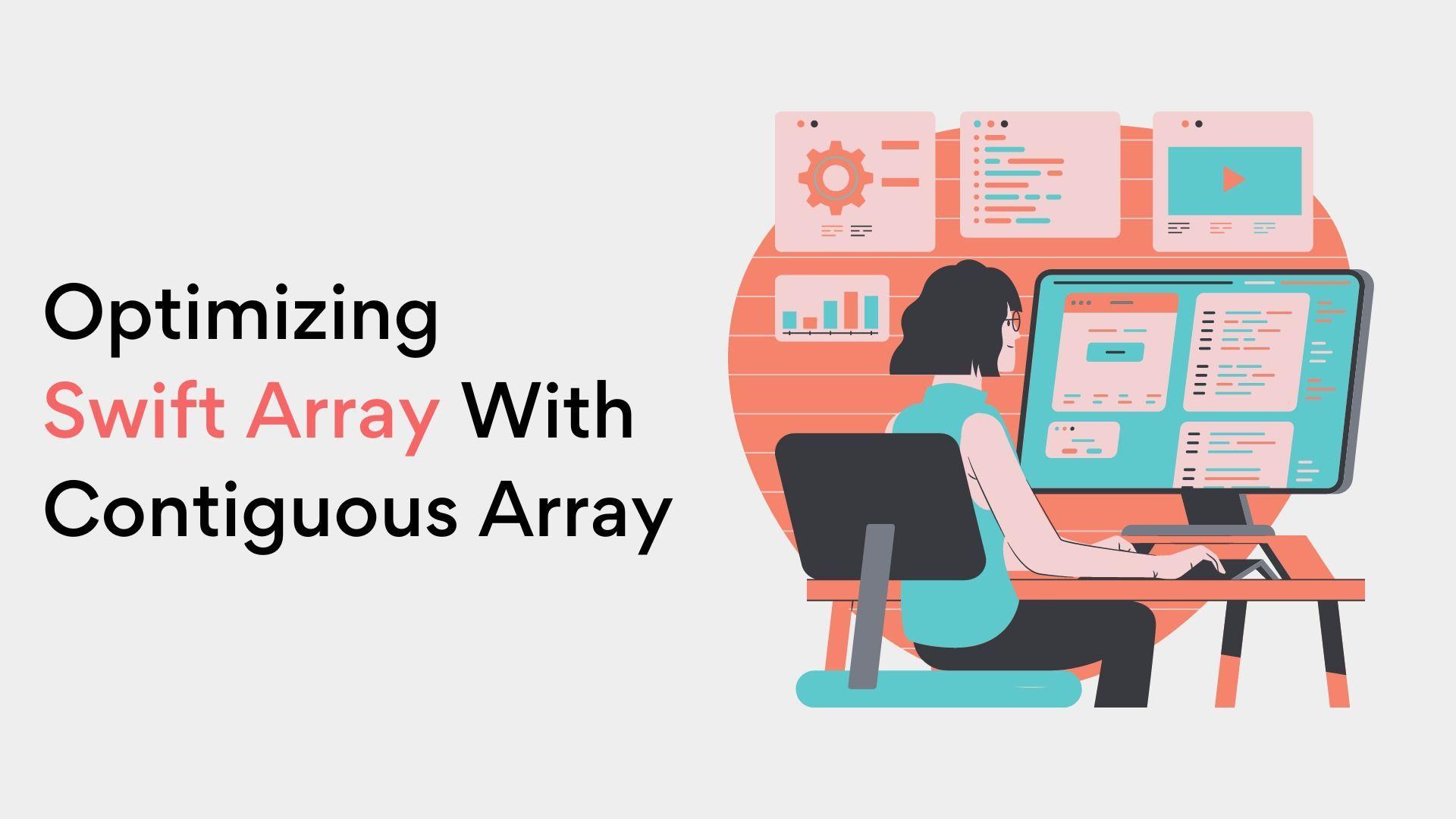 If you are working on developing an app or game, one of the most important things to do is optimize it in terms of performance. You have to think of the various aspects including memory usage, file size, time taken to load elements, performance etc., but to add more value to your app, you can equally focus on the performance aspect and make sure nothing slows down your application.

This tutorial explains how you can use Arrays in Swift along with ContiguousArray.3

What is array in Swift and how do they function?

The most common data type in an app is the array. You can organize your app's data using arrays. Arrays hold single-type elements, known as the array's element type. It is possible to store any type of element in an array, from integers to strings and to classes.

If you specify the element type of your array in the declaration, you will be able to create an empty array. For example:

You can use the Array(repeating: count:) initializer if you need your array to be pre-initialized with a fixed number of values.

You can iterate through an array's elements using it for - in loop when performing an operation on all the elements.

If you need to check quickly whether an array contains any elements, use the isEmpty property, or if you want to know how many elements are in it, use the count property.

You can access array elements through subscripts. Arrays with no empty elements start at index zero. Any integer can be subscripted onto an array up to its count but not beyond it. If the count is less than or equal to a negative number you will encounter a runtime error. For example:

Consider the case where you need to keep track of the names of all the students in a class. It is necessary to add and remove names during the registration period as students enroll and drop out.

The methods remove(at:), removeSubrange(_:), and removeLast() will get used to removing elements from an array.

You can assign a new value to a subscript to replace an existing element.

In Swift, there are two ways of sorting array. One mutates the array, and another doesn’t. In both cases, the element in the collection had to conform to the Comparable protocol.

There are two sorts, sort() and sort(by:), which mutate an array. A mutable array value can be sorted by calling sort() over it.

Consider the following example, if you have an array of different words, and you want to retain only those words with more than three characters:

Each element in the source array is filtered using the filter(isIncluded:) method. An array will be filtered if this closure returns true. Returning false will ignore the element and prevent it from being included in the array. A filter does not modify the original Array when applied to it. This method creates a new temporary array with only the desired elements by filtering (isIncluded:) and displaying output.

What is ContiguousArray in Swift?

ContiguousArray is a very powerful tool to use when you need to create any sort of array that elements can be added/ removed right away without the need to reindex. This is a very good solution if you do not know the size of your array in advance while adding/or removing elements in your array.

The only problem with contiguous arrays is that they are always smaller than the size you first declare them as. So if you initially declared it as an Int16 array and a large number of elements inserted into the array unexpectedly, it will resize itself up to Int32 and would possibly make copies of elements that are located far from its original memory location.

Here is an example of an array literal containing only strings to create an array of strings:

In this article, we have seen what is an array along with its functioning and how to create a ContiguousArray. What is the difference between contiguous and non-contiguous memory allocation? We also saw some basic examples for demonstrating array functioning.

Though CSS deals with creating and styling smart layouts on the web...

Communication has evolved tremendously over the years...

As rightly said, the first impression is the last impression. The same goes for any web application...

What is contiguous storage in an Array?

The ContiguousArray type is a specialized array that always stores elements in contiguous memory areas. The Array class, on the other hand, can store its elements either contiguously or in an NSArray instance, depending on whether the element type is a class or an @objc protocol.

Which is faster, set or array swift?

In terms of initialization, arrays are faster than sets. Hashing slows down the initialization of a set compared to an array. Arrays can store duplicate elements. In a set, you cannot have duplicate elements. In direct comparison, sets are faster than arrays, especially when it comes to running queries faster: IndexOf() and includes() are slow methods for checking whether an item exists in an array.

Arrays consist of contiguous memory locations that contain the same types of elements that can be accessed individually via indexes referring to unique elements. You can declare five int values as arrays without declaring five separate variables (each with its unique identifier).