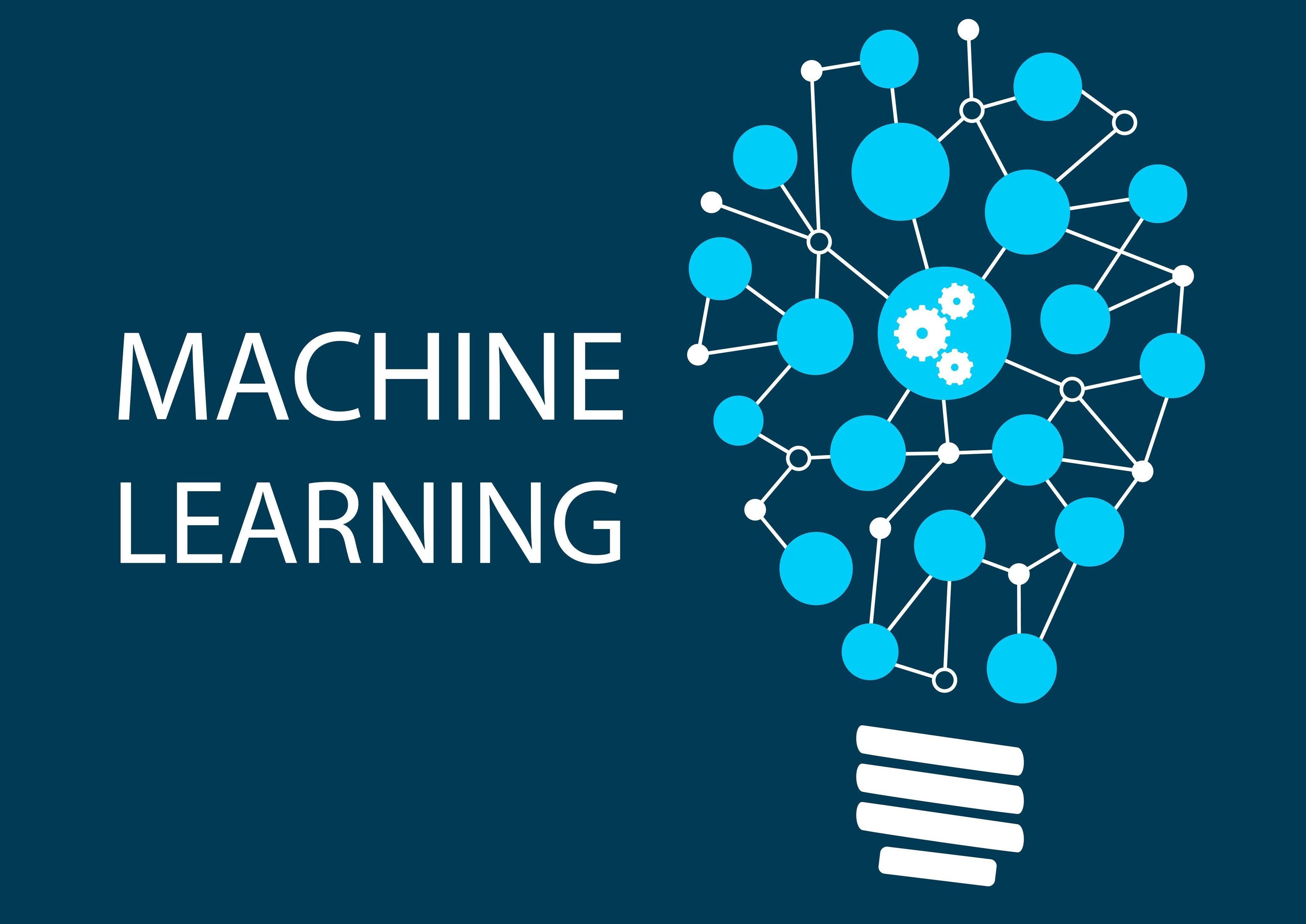 Decision trees in machine learning (ML) are used to structure algorithms. A decision tree algorithm helps split dataset features with a cost function. Through a process called pruning, the trees are grown before being optimized to remove branches that use irrelevant features. Parameters like decision tree depth can be set to lower the risk of an overly complex tree or overfitting.

Decision trees are used to solve classification problems and categorize objects depending on their learning features. They can also be used for regression problems or as a method to predict continuous outcomes from unforeseen data.

This article will look at the need to use decision trees in ML, the different types of decision trees, the pros and cons, and much more.

What is a decision tree?

A decision tree is a way of modeling outcomes and decisions with each decision in the branching structure representing a different branch. It is used to calculate the success potential of various resolutions to achieve a specific goal.

Being manual models for portraying operational decisions, decision trees existed long before the invention of machine learning. They continue to be used by businesses to analyze organizational decisions.

A form of predictive modeling, decision trees help map various solutions or decisions that arise for a given outline. Different nodes are required to make the trees. The beginning of the tree is the root node, which is a whole dataset that lies within machine learning.

The leaf node is the final output of a series of decisions made or the endpoint of a branch. There will not be more after the leaf node. With regard to machine learning, the data features are the internal nodes and the outcomes are the leaf nodes.

Decision trees can be used with a supervised machine learning model. The technique uses labeled input and datasets for output to train a model. This approach can be employed to solve classification issues when an object needs to be classified or categorized.

Decision trees can be applied to regression issues as an approach in predictive analytics to forecast outputs from unseen data. They are popular in the machine learning community as forms of structured models. The tree-like structure is easy to understand and allows us to analyze the decision-making process quickly.

Explainability, which refers to understanding a model’s output, is a vital part of machine learning. It is a powerful tool that detects flaws in the model and influences the data. It helps verify predictions to improve model performance and gains new insights about a problem.

The decision tree algorithm belongs to the supervised learning algorithm family. The main goal is to create a training model to predict the value of the target variable by learning simple calculations from the previous data. 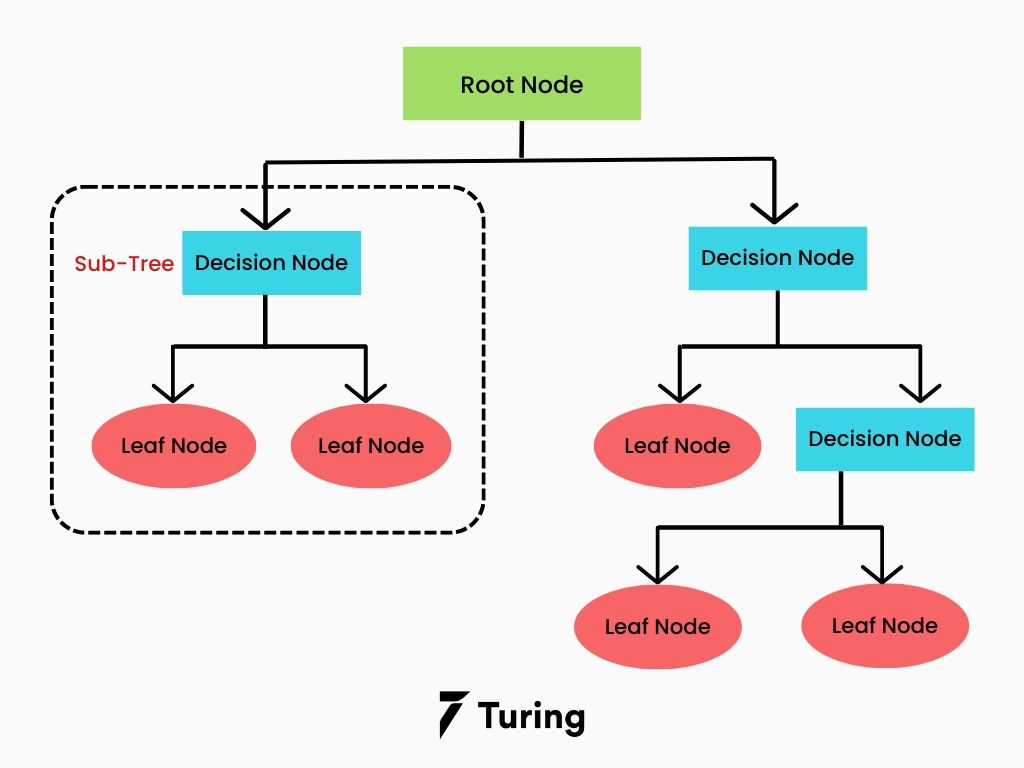 To predict a class label for a record in decision trees, we need to start from its root. We have to compare the values of the root attribute with the record’s attribute. We then follow the branch that suits the value and jump to the next one. We use the pruning technique to generate more branches in a tree.

Here are some common terminologies related to decision trees.

Using the classification example, we can sort a decision tree from the root to the terminal nodes. Every node will act as a test case and every edge will descend from the node to the corresponding possible solutions for the test case. We repeat this recursive process until every subtree is rooted in the new role.

A continuous variable decision tree is one that has an uninterrupted target variable. Example: a person can predict what his income is likely to be by using the information that is already available, such as his age, occupation, and other continuous variables.

A categorical variable decision tree has an unconditional target variable divided into various types. For instance, the categories can be either yes or no. The types mean that each stage of the decision-making process falls into each category and there is nothing in-between.

How do decision trees work?

We need to know a tree’s accuracy to arrive at a decision to build strategic splits. The decision criteria varies based on regression and classification trees. Decision trees use different algorithms to split a node into different sub-nodes. Building sub-nodes increases the homogeneity of the forthcoming sub-nodes. 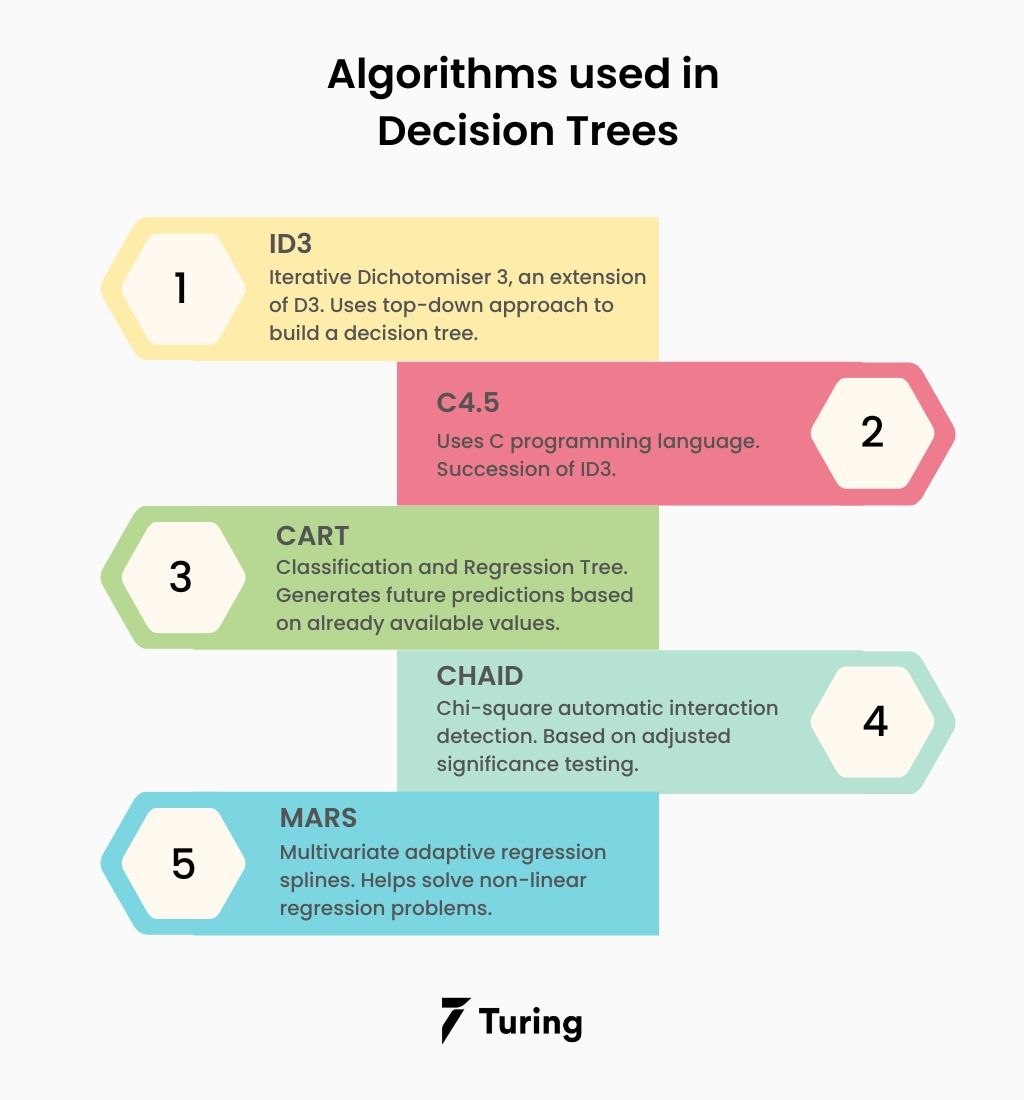 The following are the algorithms used in decision trees.

ID3 or Iterative Dichotomiser 3 is an algorithm used to build a decision tree by employing a top-down approach. The tree is built from the top and each iteration with the best feature helps create a node.

Here are the steps:

There are marked differences between regression trees and classification trees.

Chi-square automatic interaction detection (CHAID) is a tree classification method that finds the importance between the parent nodes and root nodes. It is measured by adding the squares of standardized differences between the expected and observed frequencies of the target variable.

It works using the categorical target variables, Success or Failure, and can work on two or more splits. If the Chi-square value is high, the statistical importance of the variation of the parent node and root nodes will also be high. It will generate CHAID.

Multivariate adaptive regression splines or MARS is a complex algorithm that helps solve non-linear regression problems. It lets us find a set of linear functions that provide the best prediction. It is a combination of simple linear regression functions.

If a dataset contains N attributes, choosing what attribute to place at the root node or different tree levels as internal nodes can be complex. Randomly selecting a node as the root won’t solve the problem either. Following a random approach will also produce bad results with very low accuracy. To address this attribute-choosing problem, we need to apply the solutions below:

These solutions help calculate the values for each attribute. We can sort the values and place them in the tree with the higher value to the root and lower as it goes to the sub-nodes. Note that if we use information gain, we need to consider attributes as categorical. On the other hand, if we use Gini index, we should consider them as continuous.

Entropy is a measure of the randomness of the information being processed. The higher the entropy, the harder it will be to solve that information. For example, when we flip a coin, we can’t be sure about the outcome. We are simply performing a random act that will provide a random result.

In ID3, a branch with zero entropy is denoted as a leaf node. The one with entropy more than zero will need splitting.

The formula for the entropy of one attribute is:

where Pi is the probability of an event i from the S state.

Information gain is a statistical characteristic that measures how well an attribute divides the training instances according to their target types. Building a decision tree is discovering attributes that will return the best information gain and the smallest entropy.

The formula is as below:

We can use a cost function for evaluating splits in the dataset denoted using the Gini Index. We can calculate it by subtracting the total of the squared probabilities of every class from one. It will favor huge partitions and is very easy to implement, but IG will gain fewer partitions with unique values. The Gini Index formula is as below:

The formula for the gain ratio is as follows:

Reduction in variance is an algorithm for regression issues or continuous target variables. It uses the usual formula of variance to select the perfect split. A lower variance split is the criteria for the population split. The formula is:

where X-bar is the mean of the values, n is the total values, and X is actual.

How to avoid or counter overfitting in decision trees

The major problem with a decision tree is that it has a table full of attributes to the extent that fitting more is difficult. It can be hard to train a dataset when there is so much information. If there is no set limit for the tree, we can achieve 100% training accuracy. In the worst case, it will create one leaf per observation which will impact the accuracy when we want to predict samples that aren’t in the training set.

The splitting process will provide a grown tree until it reaches the final stage. However, the fully grown tree overfits the data which leads to poor accuracy on unseen data. In pruning, the decision nodes are cut off from the leaf node.

Random forest is an example of ensemble learning where different machine learning algorithms are joined to obtain predictive performance. There are two reasons it is called random: one, because we create a random training dataset when creating trees, and two, because we use the random feature subsets when splitting the nodes. We use the bagging technique to create an ensemble of trees to create different training sets with replacements.

The decision to choose between a linear and tree-based model depends on the issues we want to resolve. Below are a few scenarios:

When building a model, a decision tree approach is a better choice as it is simpler to interpret compared to a linear regression model.

The advantages of decision trees are as follows.

Even the best algorithms have disadvantages - including decision trees.

We’ve seen how decision trees are used in machine learning algorithms. They are a popular choice as they are easy to understand since they are in visual form. They help streamline the process of making a model’s output understandable without the need for technical knowledge. Data preparation is another advantage as it does not need a lot of data cleansing compared to other approaches. Moreover, decision trees don’t require data normalization as they process numerical and categorical data that don’t have to be transformed with other methods.

How Does Natural Language Processing Use Machine Learning?

Natural language processing (NLP) has become a part of our daily lives...

Top 26 Machine Learning Applications You Must Know in 2022

Machine learning is a modern breakthrough that has helped people better in a wide range of industrial and professional operations and their everyday lives.

Dynamic Time warping (DTW) is a method to calculate the optimal matching between two...

What is the purpose of using a decision tree?

Decision trees help people evaluate their options and choose between different courses of action. They provide an effective structure within which we can place our options and find possible outcomes for choosing those options.

What is the final objective of a decision tree?

The final objective of a decision tree is to make the optimal decision at the end of every node. It needs an algorithm that is capable of doing the same.

What are the advantages of using decision trees?