Know How to Detect and Remove Loop in Linked List

A linked list is a computer science term that refers to a linear collection of data elements whose order is not provided by their physical placement in the memory. Rather, the elements are linked using pointers. This simply means that a linked list contains nodes where every single one comprises a data field and a reference link to the next node in the list. In this article, we will learn to detect and remove a loop in a linked list. This will be particularly helpful for data scientists as familiarization of a linked list as well as loops is important.

A linked list that contains a loop will have the last node pointing to another node in the same list, rather than pointing to the NULL.

Removing a loop in a linked list means making the last node point to NULL and not to other nodes in the list. 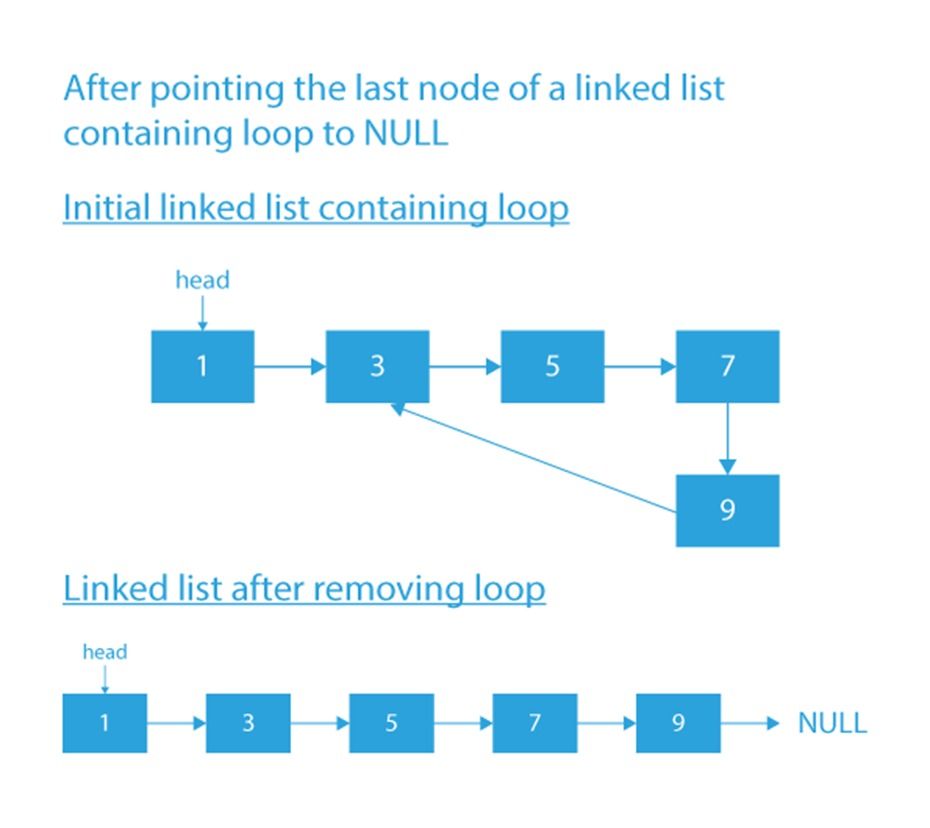 In the figure above, we can see that the linked list has a loop beginning at node 3 and contains 4 nodes, i.e., 3, 5, 7 and 9. We can also see that the last node redirects back to the first node.

There are several ways we can remove a loop in a linked list. Let’s discuss this in detail

How to find a loop in a linked list

The first step in diagnosing the problem is to detect if the linked list indeed has a loop. And the quickest way to do this is by using Floyd’s cycle-finding algorithm. It uses two pointers with one moving slower than the other as it traverses the list. The algorithm is also sometimes called the hare-tortoise algorithm as a reference to the children's story about the race between the hare and the tortoise.

In practice, Floyd's cycle-finding algorithm works as shown below:

Step 1: Both the pointers (ptr1 and ptr2) begin by pointing at the first node. 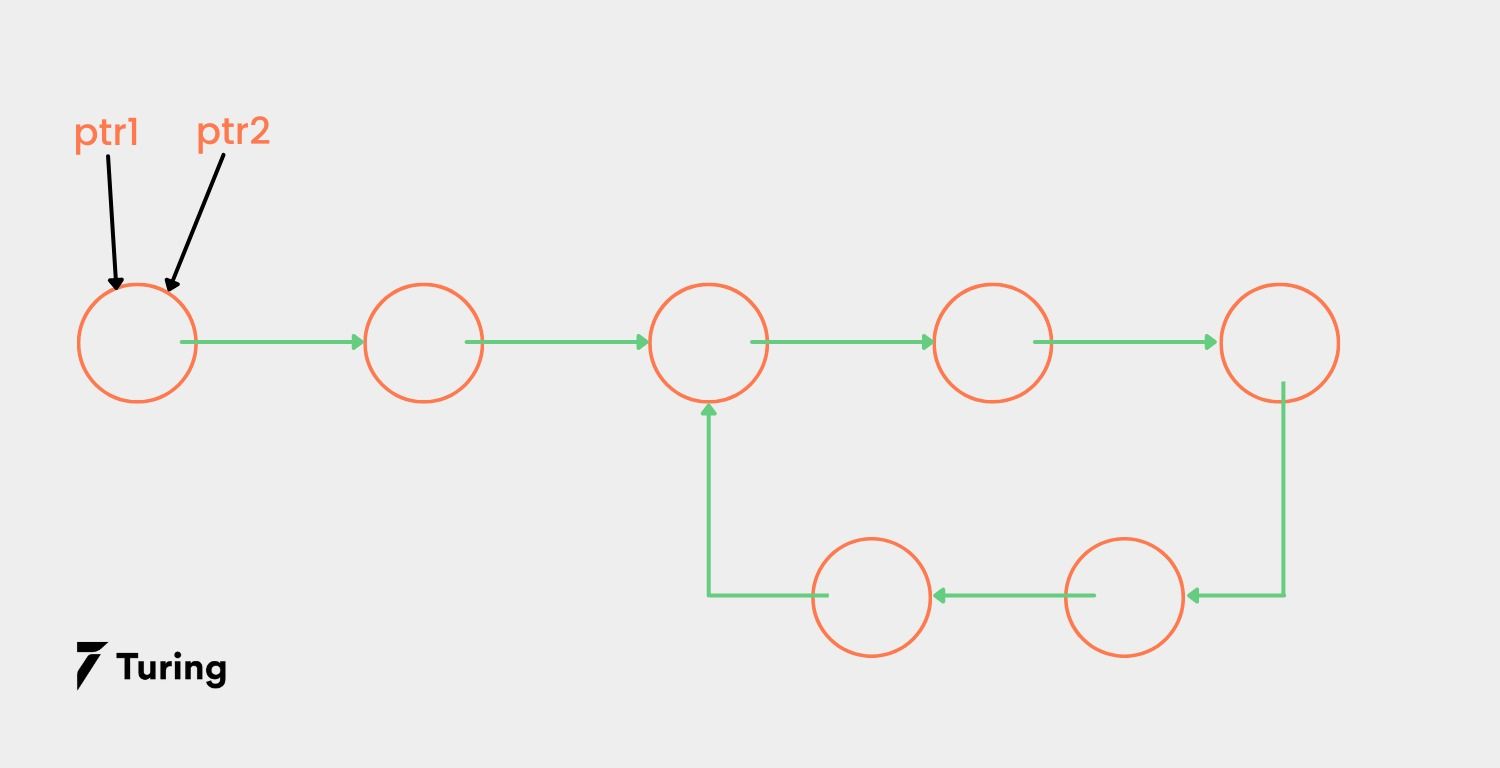 Step 2: The two pointers start traversing the list, ptr1 one node at a time, and ptr2 two nodes at a time. 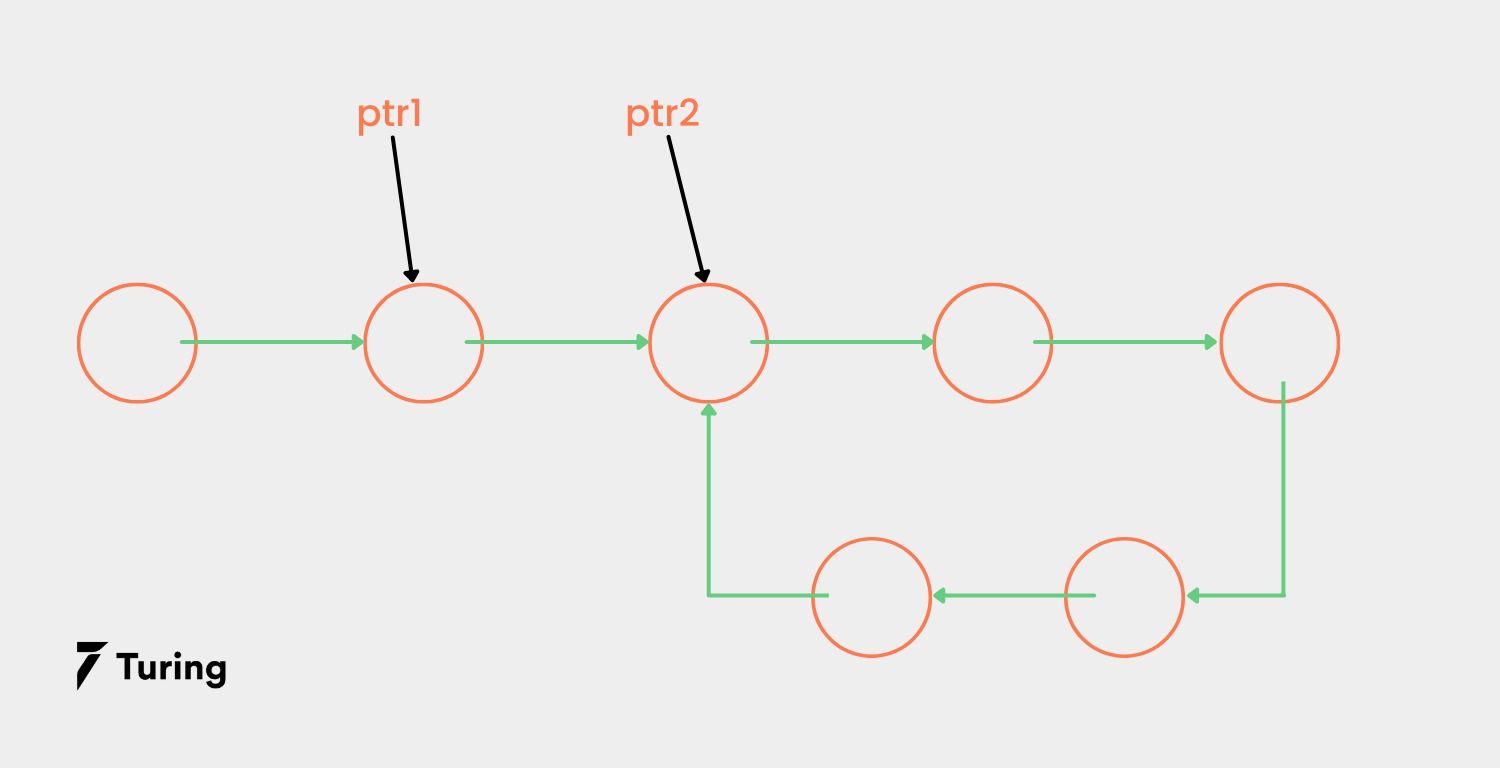 Step 3: Since ptr2 moves faster than ptr1, it will reach the end of the linked list sooner.

After reaching the end of the list, there are two possible scenarios.

In the first scenario, there will be no loop in the list and therefore, ptr2→ will point to NULL since ptr2 moves two nodes at a go. This means that ptr2 will become null even if there are several nodes. Note that if there is an even number or an odd number of nodes in the linked list, ptr2→ will still become null.

In this case, a null value is encountered and we stop the execution and demonstrate the output of the code as ‘no loop’.

The second scenario is the presence of a loop in the linked list. As you may have already guessed, the pointers will not reach NULL. Instead, they will enter the loop and cross over there. Additionally, at some stage during traversing the list, the two pointers will eventually meet at a particular node.

Why is this? Because once the pointers find a loop, they will begin traversing in the loop with varying speeds, therefore ultimately meeting. When this happens, instead of finding a null value, it will be ptr1 = ptr2. Thus, the execution will stop and the code will show the output as ‘loop is present’.

Here are the images displaying the use of Floyd’s cycle-finding algorithm: 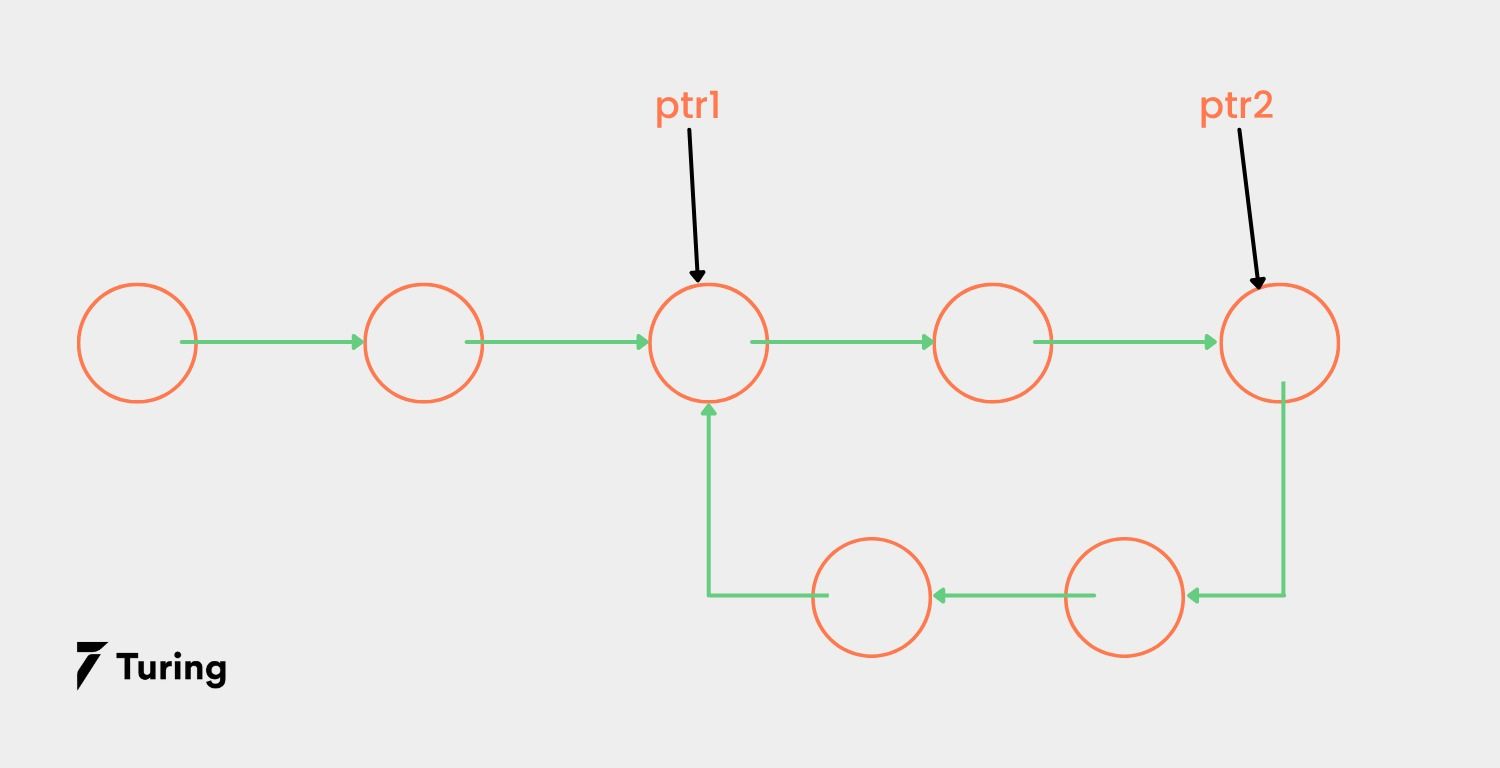 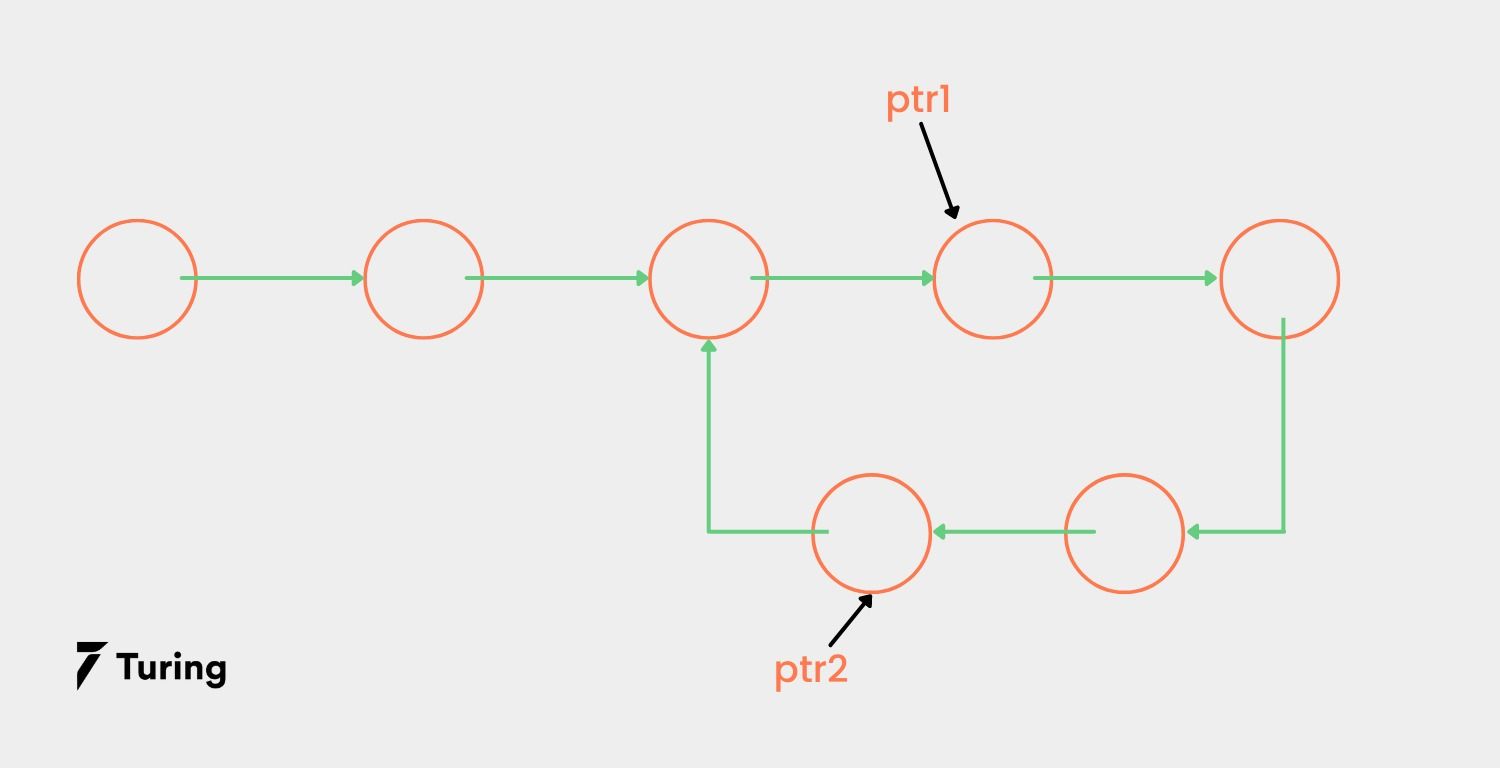 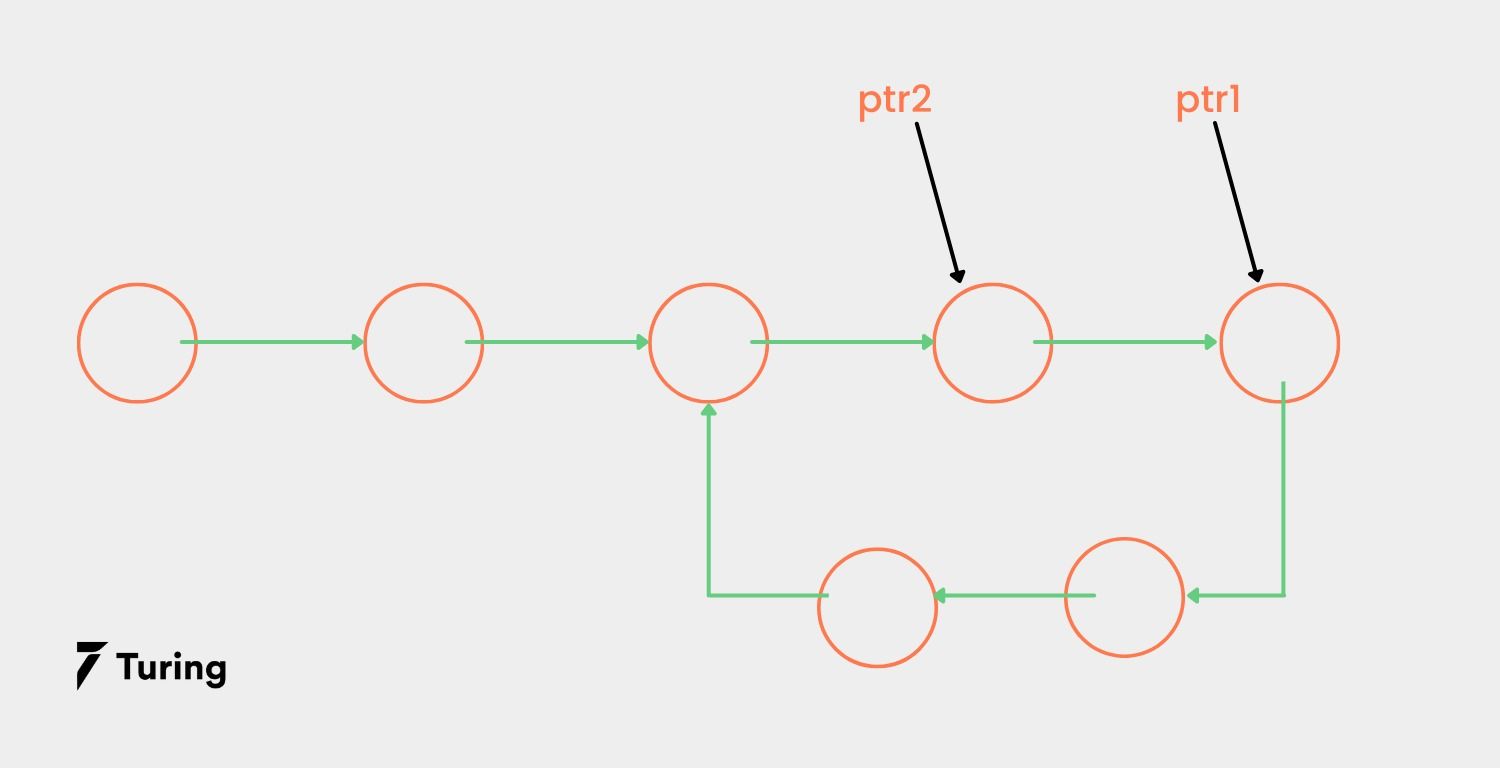 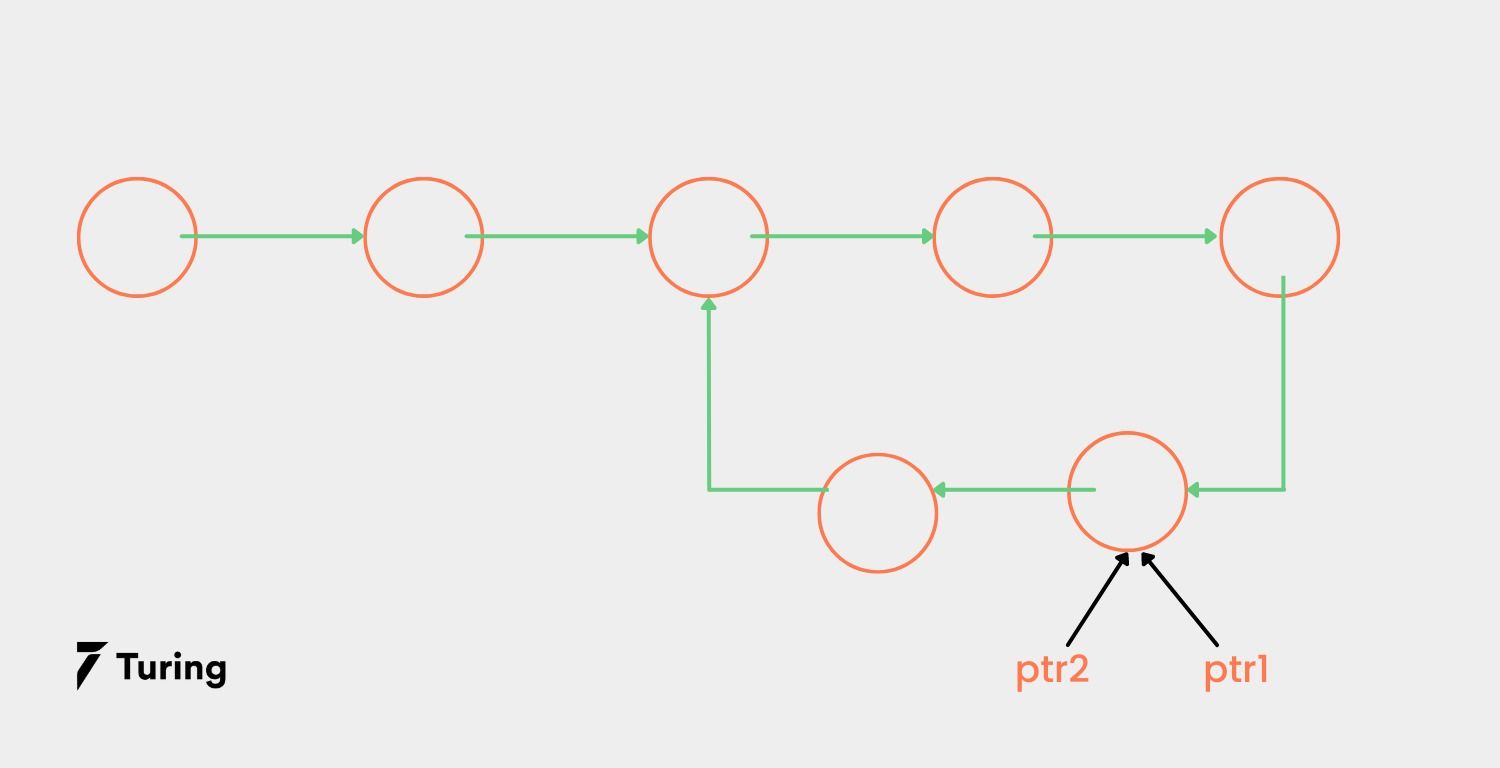 As we can see, the two pointers will ultimately meet at a particular node in the loop.

How to remove a loop in a linked list

Let’s look at how we can remove the detected loop from our linked list so that the last element will point towards NULL. Here’s a step-by-step guide.

Step 1: As mentioned, ptr1 and ptr2 will finally point to the same node in the loop. So, we have to find the last element in the loop and make it point to NULL as shown below. 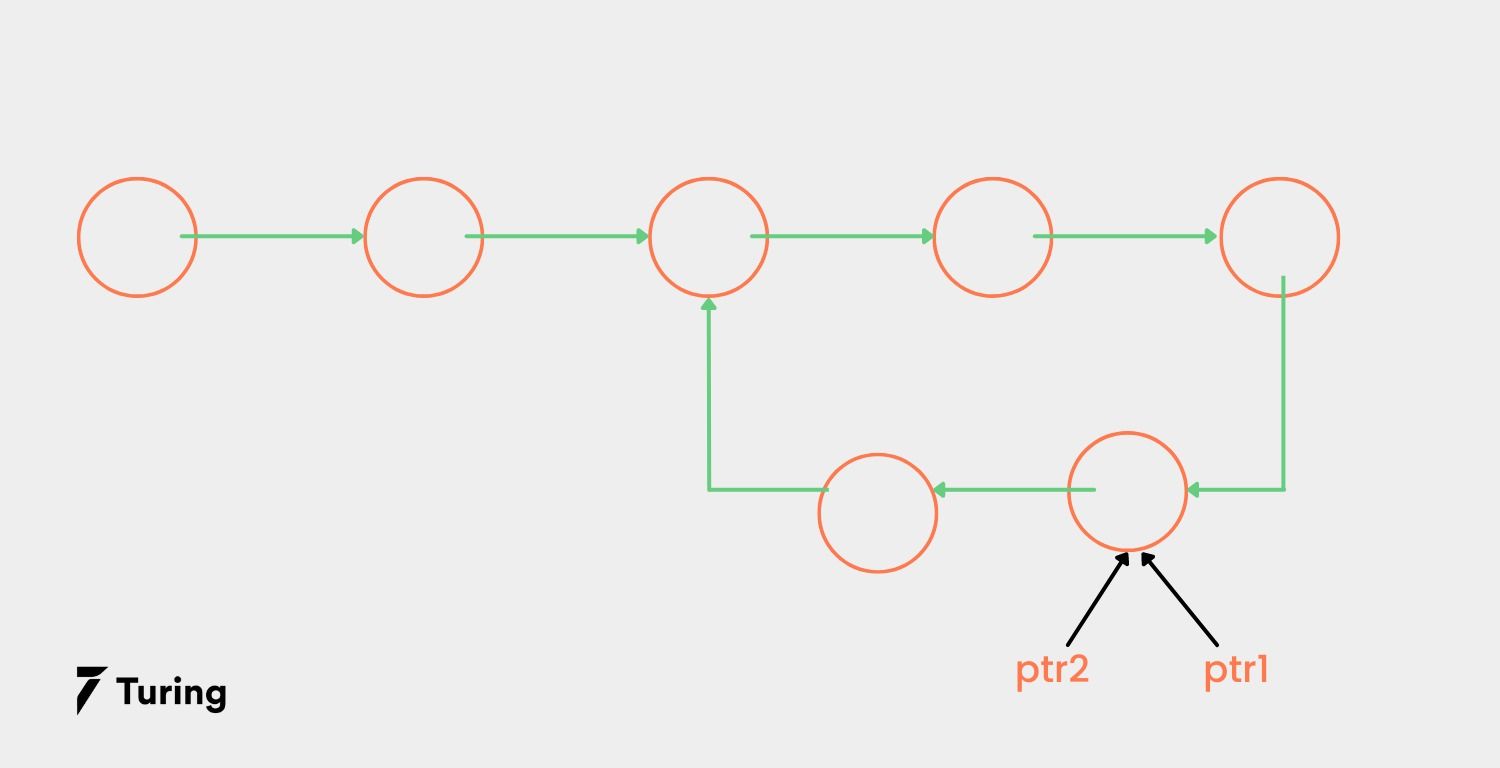 Step 2: Leave ptr2 in its current location while making ptr1 point to the head of the loop as highlighted below. 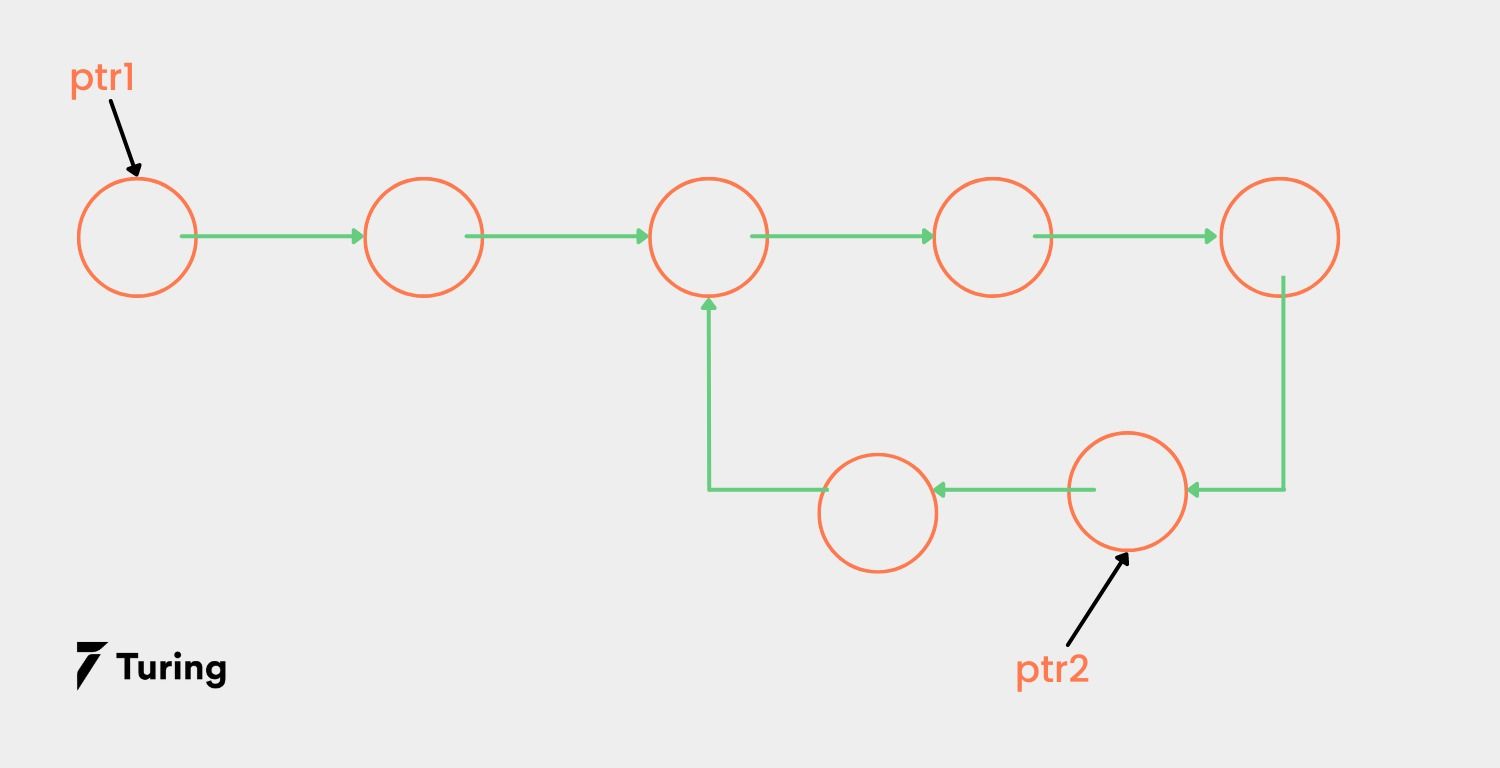 Step 3: Next, we traverse the two pointers through the linked list. Rather than ptr2 moving at a faster speed than ptr1, both pointers will move at the pace of ptr1, i.e., one node at a time. The traverse will continue until the two pointers eventually meet at one node. This is where the loop will begin. 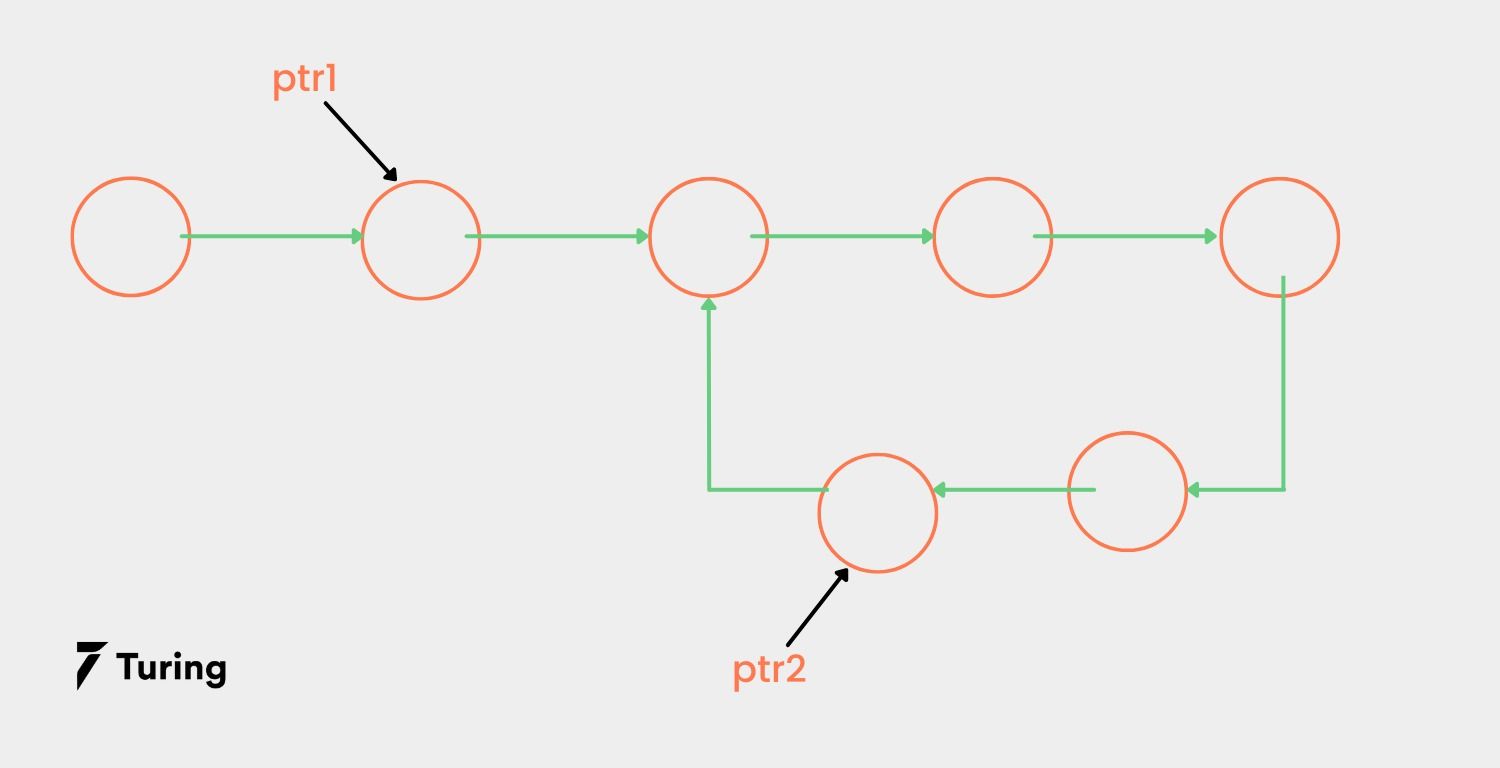 Step 4: It’s time to remove the loop. We will make ptr2 point to the null value. Remember that the next of the two pointers will always meet at the start of the loop.

You may be wondering why the ‘next’ of ptr1 & ptr2 meets at the node that denotes the start of the loop. This is why:

Starting with both pointers at the head node, ptr1 moves N-L steps or 7 steps for this example. Since ptr2 moves two nodes at a time or twice the speed of ptr1, ptr2 should move 2(N-L) steps or extra steps compared to ptr1.

However, the execution must be stopped the moment ptr1 and ptr2 meet at the same node. Now, the two will meet when the distance between them is L, since ptr2 will traverse the loop once and then meet with ptr1.

Now, leaving ptr2 in its original location, we bring ptr1 to the head node. Both pointers will still move one node at a time, i.e., at the same speed. In this case, ptr1 moves N-L nodes to reach the node of the starting loop. Likewise, when ptr2 moves N-L nodes, it will reach the node of the starting loop, since ptr2 was 2 nodes from the initial point, i.e., (N-L)%L.

Here is a code in C programming language for the problem:

From the above code, the linked list with a loop is initialized first. We then applied Floyd’s algorithm to get rid of the loop and then print the output.

If you found the first method complicated, this next one is pretty straightforward. In this approach, we will use an unordered_map which will keep inserting nodes while moving through the list.

Once we meet a node that is in the map, it denotes that we have reached the node of the starting point of the loop.

While traversing the list, we ensure that the two pointers are at each step: head and last. The head points to the current node and the last node points to the preceding node.

By doing this, the last node will point to NULL rather than to the starting node of our loop. The code for this problem is shown below in C++, Java, and Python languages

As discussed, a linked list is one of the most important data types in computer programming. It is a collection of data elements that is accessed by iterating through the elements connected using pointers. Try the codes given above in your preferred programming language to detect if your linked list has loops and remove them.

How is a linked list different from an array?

Both are popular data types in various programming languages. Arrays are pre-determined chunks of memory with immutable size, whereas linked lists are a collection of separate, ordered memory chunks connected using pointers.