When you visit an e-commerce website and click on a button like ‘Place Order’, an HTTP request is sent to the backend. Here, a back-end server serves the request. This web server can be written in a JavaScript framework like NodeJS or with a Python framework like Flask. However, there is another framework called FastAPI that can be used. In this article, we’ll compare FastAPI vs Flask, including their features, differences, and pros and cons.

Python is a popular and widely used language among developers. Whether for machine learning (ML), deep learning, scripting, or application programming interface (API) development, it is by far the most favored. Companies continue to hire Python developers as they use the language to build their applications. Its popularity is largely in part due to the features and tools it offers like Flask, FastAPI, web-scraping, etc. Note that Flask is used by the majority of ML and API developers as it was released sooner, but FastAPI is quickly gaining popularity.

What is a web development framework?

Before exploring Flask and FastAPI, it’s important to have some knowledge of what a web development framework is.

A web development framework is used for developing web applications. It is a collection of modules, libraries, classes, and functions that helps web app developers write applications without having to think too much about low-level details like protocol and thread management.

Django, which is written in Python and developed by Django Software Foundation, is one of the best examples of web development frameworks. However, for small- and large-scale applications deployed on the cloud, the AWS Lambda function is used as an HTTP server with NodeJS.

Flask is a Python-based lightweight Web Server Gateway Interface (WSGI) web application framework. It is the specification of a common interface between web servers and web applications. 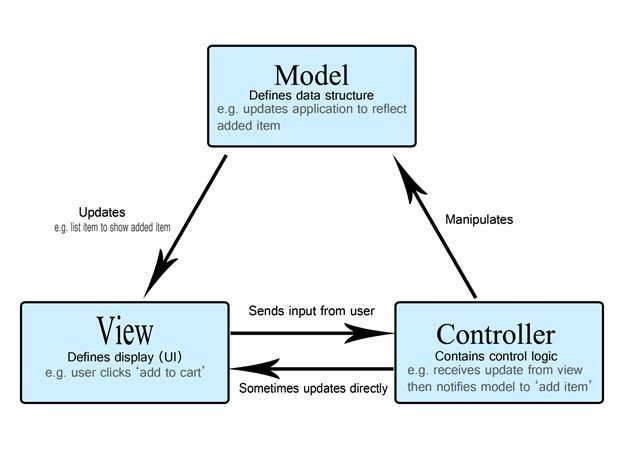 Flask is also called a micro web framework because it does not require particular tools or libraries and aims to keep the core simple but extensible. It only provides the necessary components needed for development, such as routing, request handling, etc.

It is very easy to get started with the Flask application so it’s great for beginners too. It can be used for both simple and complex applications.

To install Flask in your system, use the command.

You can refer to Flask documentation here.

Flask has been in use for ages and is one of the most famous Python frameworks for creating REST services. As discussed, it is easy to use and deploy and is effective for making microservices. However, Flask has a few disadvantages, so to compensate for them the FastAPI framework was born. 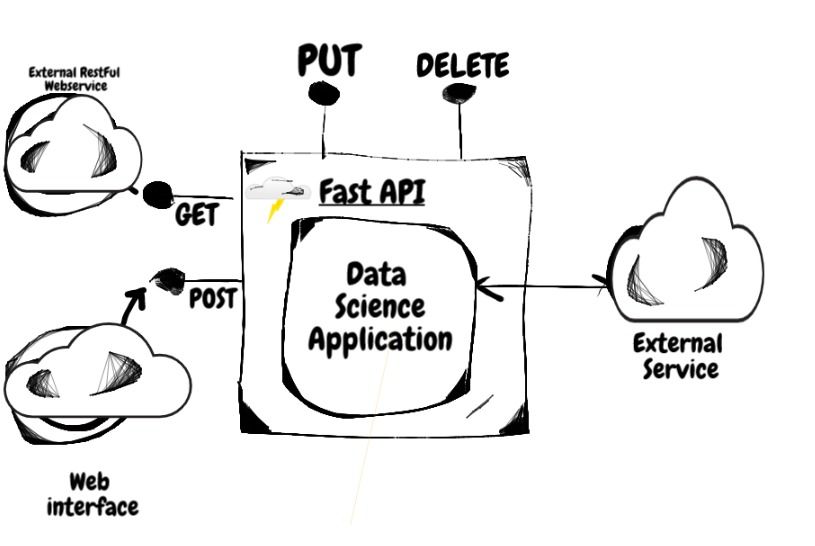 FastAPI is described as a modern and high-performance web framework for developing APIs with Python 3.6+. True to its name, FastAPI is fast. It offers high performance on par with NodeJS and GO. It is used by top companies like Uber and Netflix to build their applications.

To get started with FastAPI, you need to install FastAPI and Uvicorn using pip. Uvicorn is an Asynchronous Server Gateway Interface (ASGI) server used for production.

FastAPI has the advantage of handling requests asynchronously. All you need to do is to put the async keyword before a function when declaring endpoints. For example, async def my_endpoint():

You can refer to FastAPI documentation here.

Now that we’ve briefly covered Flask and FastAPI together, let’s look at their differences.

Is FastAPI built on Flask?

Flask, which is a Python micro framework, is used for building FastAPI. It is a Python library that offers an easy way to create web applications with the help of HTML/CSS or Python. Unlike Flask, FastAPI doesn’t have a built-in development server, so an ASGI server similar to Daphne or Uvicorn is used when required. FastAPI’s speed is largely because ASGI is the server in which it was built and it supports asynchronous code.

WSGI is a Python standard specifically written for web applications and servers to interface with each other. It was introduced in 1999. Novice programmers can sometimes find it challenging to start with Python. However, those who have worked with PHP or Ruby will have an easier time understanding it.

ASGI was introduced by the inventors of FastAPI. It is a specification to build event-driven, asynchronous web applications. It comes with an API framework which means you can use any framework to build an application.

FastAPI and ASGI are complementary in the following ways: 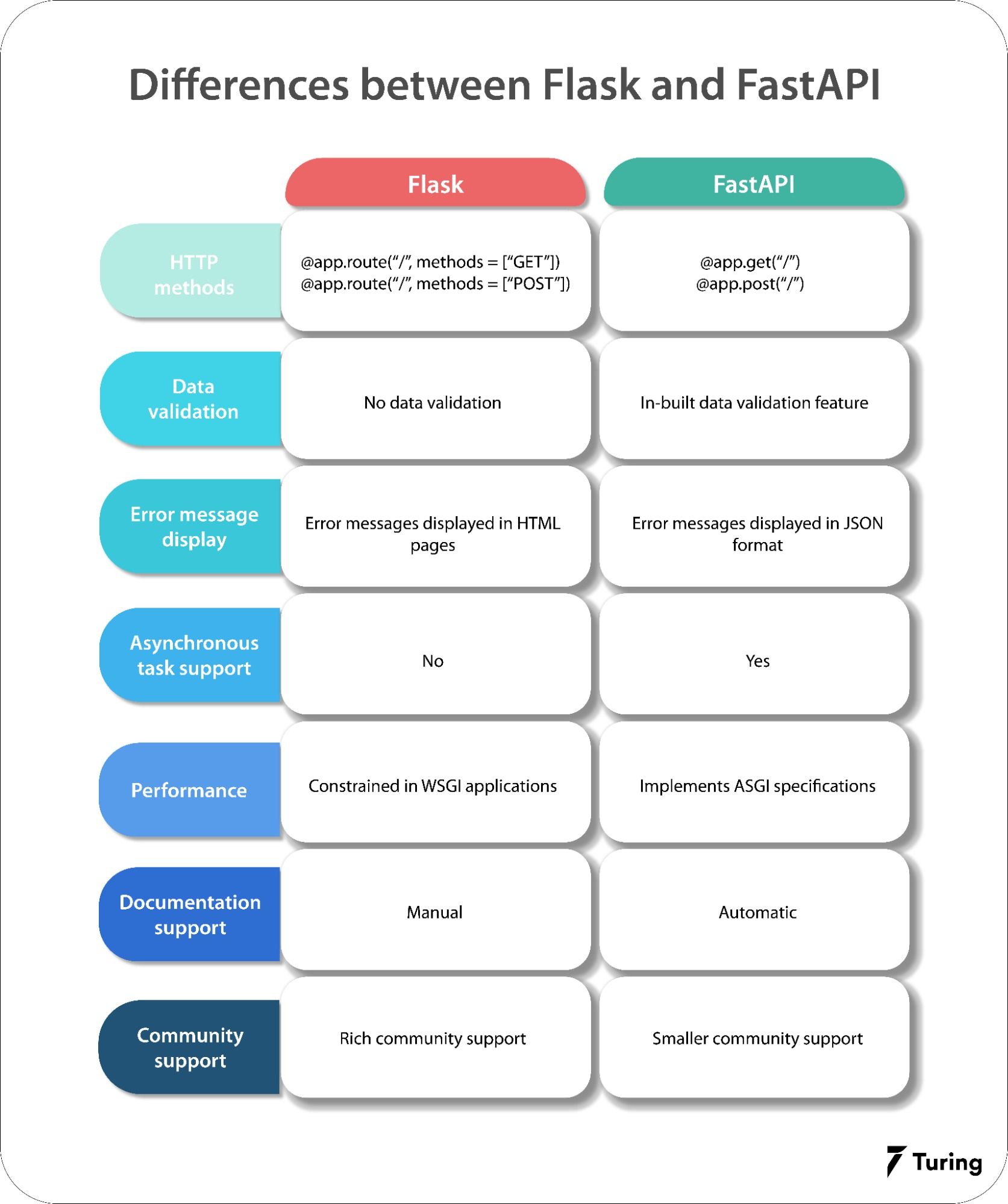 Here are some important differences between FastAPI and Flask to help you understand them better.

When you use Flask, the GET and POST commands are as follows:

When you use FastAPI, the commands are:

No data validation is present in Flask. You can pass data of any type. For instance, if the input needed is an integer and you’ve given a string, tuple, or list, it will lead to a program crash. This validation in Flask needs to be handled explicitly by the developer.

However, FastAPI provides data validation as an inbuilt feature which makes things much easier. It allows developers to declare validation and extra information on the parameters they have.

FastAPI does what it says. If you’re experienced with languages like NodeJS or Go, you will find that its performance is on par with them. Under the hood, FastAPI uses the asyncio library which allows Python developers to write concurrent code.

Asyncio is helpful for tasks that involve waiting for something, such as fetching data from APIs, querying a database, and reading the contents of a file. As mentioned, FastAPI implements ASGI specifications while Flask is constrained in a WSGI application.

In FastAPI, documentation is generated on the go when you build your API. This is very helpful. It generates a nice, clean user interface (UI) where you can test the API even when you have written no code for the UI.

To access these automated generated docs, you only need to hit the endpoint with /docs or /redoc and Swagger UI will be presented which allows you to test the API endpoints. It lists all the endpoints made in your application.

This is not the case with the Flask framework and is a disadvantage. Although Flask has documentation support, it can only be done manually.

Flask is an older framework and has extensive community support, whereas FastAPI's community is smaller. Sizable support is a big help when you’re stuck during development. Working with Flask means you will find answers to bugs you face, but you may struggle with it with FastAPI.

Pros and cons of FastAPI and Flask 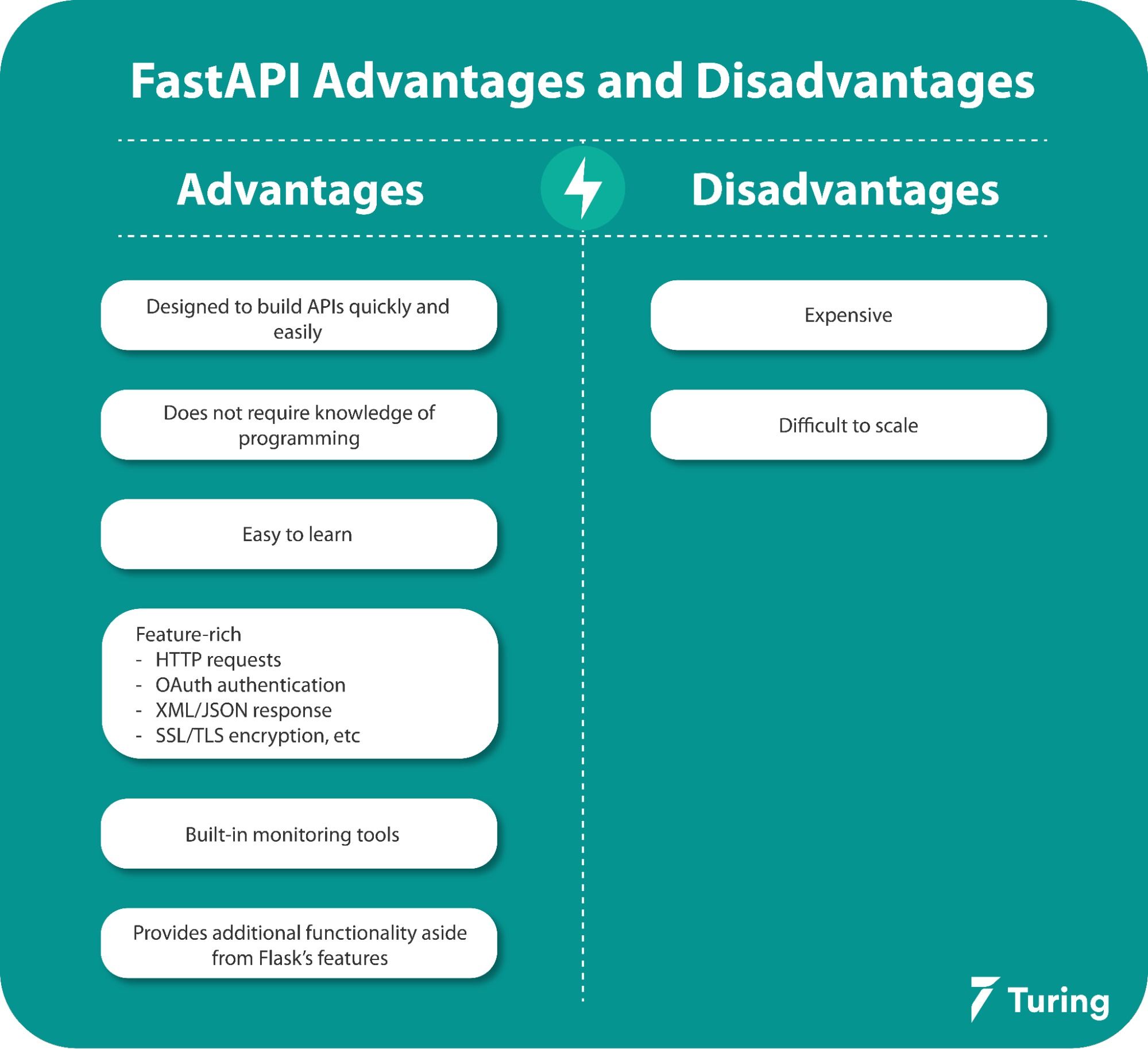 What are the pros of using FastAPI?

What are the cons of using FastAPI? 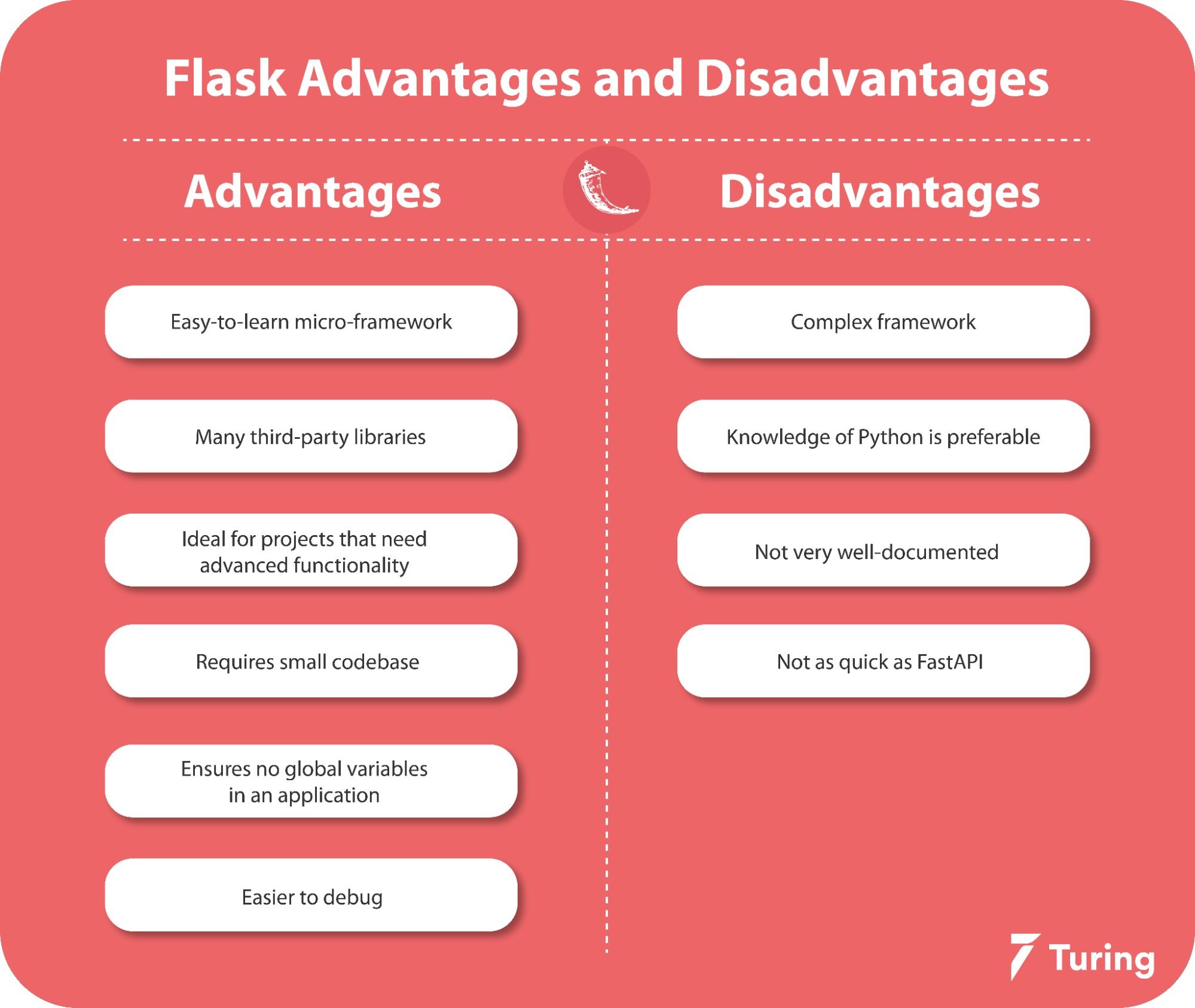 What are the pros of using Flask?

What are the cons of using Flask?

FastAPI is a full-stack framework that offers everything you need to build your API. On the other hand, Flask is a micro framework that doesn't provide all the features that FastAPI does. However, Flask is useful when you want to prototype an idea quickly or build a simple web application.

For small-scale websites and web applications

FastAPI is easy to learn, is lightweight, and can be used to build small-scale websites and applications. It comes with an object-relational mapping (ORM) layer that handles data objects in the application so that you can access them quickly through coding.

The ORM layer helps keep track of all your databases so that you don’t need to worry about how to update them manually when new information is included, modified, or deleted in the website or application.

FastAPI is used to build modern web APIs. It is built using Flask so you can use the code to create scalable and fast RESTful APIs and machine learning models.

It has many features that make it a great choice for ML models:

When to use Flask?

When to use FastAPI?

On the one hand, we have the very popular Flask framework and on the other, we have the FastAPI framework which has won the hearts of users, thanks to its many built-in functionalities. While both these Python frameworks are simple and easy to use, FastAPI has the edge as it compensates for Flask’s limitations.

FastAPI’s data validation feature is helpful when developing and debugging code that interacts with an API. The in-built documentation support listed with all the endpoints is the cherry on top. Its runtime performance is superior too. It also takes less time to write code, has fewer bugs, and has many more features, as we've discussed.

Based on these factors, adopting the FastAPI framework for your next REST project is the smart option. Of course, the choice is yours and depends on your use case but you might want to give FastAPI a try.

Why is FastAPI better than Flask?

FastAPI is a better choice than Flask when you need to build APIs, especially when microservices must be considered. The only argument in favor of Flask is that it will help you with framework-building tools.

FastAPI vs Flask: which is better for machine learning?

FastAPI is a better option for building APIs than Flask. However, you should choose Flask if your organization already has tools built around it.

It’s a good idea to go with the Flask framework when you need to build a simple microservice with a couple of API endpoints. It’s also suitable when you want to build web application prototypes and machine learning models backed by data science.

Django vs Flask: which is better?

The Django vs Flask answer can be summed up as follows: high-traffic websites are usually built on the Flask framework as it performs better than Django. The two share a few similar concepts but Django is more complex when compared to Flask.

Ideally, you should first learn the Flask framework if you want to leverage the capabilities of Django. Basic programming skills are enough to start using Flask, but Django requires more in-depth knowledge. Then again, as your project grows and you need new functionalities, using Flask can become overwhelming, whereas Django makes things easier.