The Naive Bayes text classification algorithm is a type of probabilistic model used in machine learning. Harry R. Felson and Robert M. Maxwell designed the first text classification method to classify text documents with zero or more words from the document being classified as authorship or genre.

Since then, Naive Bayes has become one of the most popular and effective classification methods for unsupervised learning of data. This article is an introduction to creating a simple Naive Bayes document classification system in python.

Naive Bayes is a probability-based machine learning algorithm that uses Bayes' theorem with the assumption of “naive” independence between the variables (features), making it effective for small datasets. The Naive Bayes algorithms are most useful for classification problems and predictive modeling.

What is the Naive Bayes classification?

Naive Bayes models consist of a large cube with the following dimensions:

Let’s say you defined a hypothesis regarding your data.

It further divides the product by the probability that the defined scenario will show.

Because we are classifying documents, the hypothesis is that the document belongs to Categorical C. The evidence is the occurrence of the word W.

We can use the ratio form of the Bayes theorem in classification tasks because we are comparing two or more hypotheses, which involves comparing the numerators within the formula (for Bayes aficionados: the prior times the likelihood) for each hypothesis:

Due to a large number of words in a document, the formula becomes:

The Naive Bayes classifier can be used in the following applications: 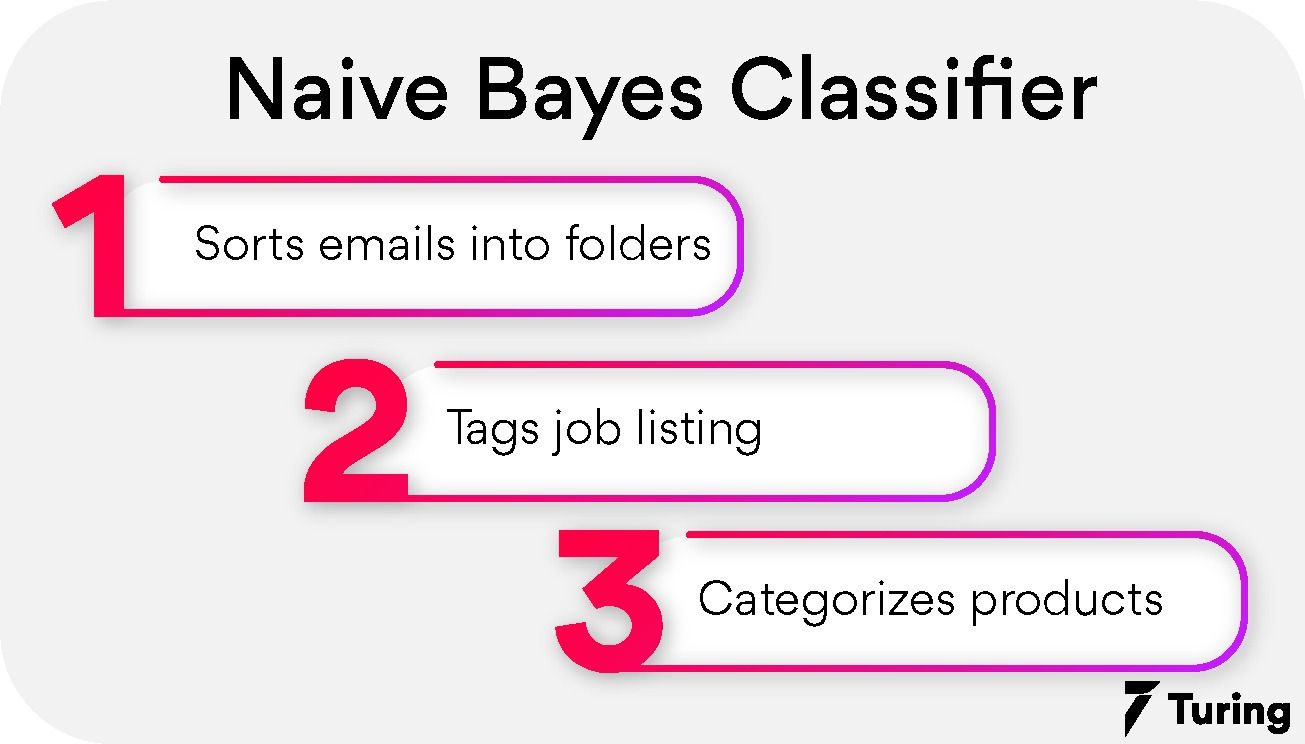 Often, even very sophisticated classification methods, especially those utilizing very large datasets, do not perform as Naive Bayes. This is mainly because Naive Bayes is very simple.

Pros and cons of Naive Bayes

Assuming that each word is independent of all the others will help us with the equation and, ultimately, with creating codes.

To simplify the math, we can make this assumption, which, in practice, works quite well. Knowing which words come before/after has a direct impact on the next/previous word.

Naive Bayes is based on this assumption. Based on that assumption, we can decompose the numerator as follows.

When to use Naive Bayes

A Naive Bayesian classifier performs worse than a complex classifier due to the strict assumptions it makes about the data. The classifier, however, has some advantages: 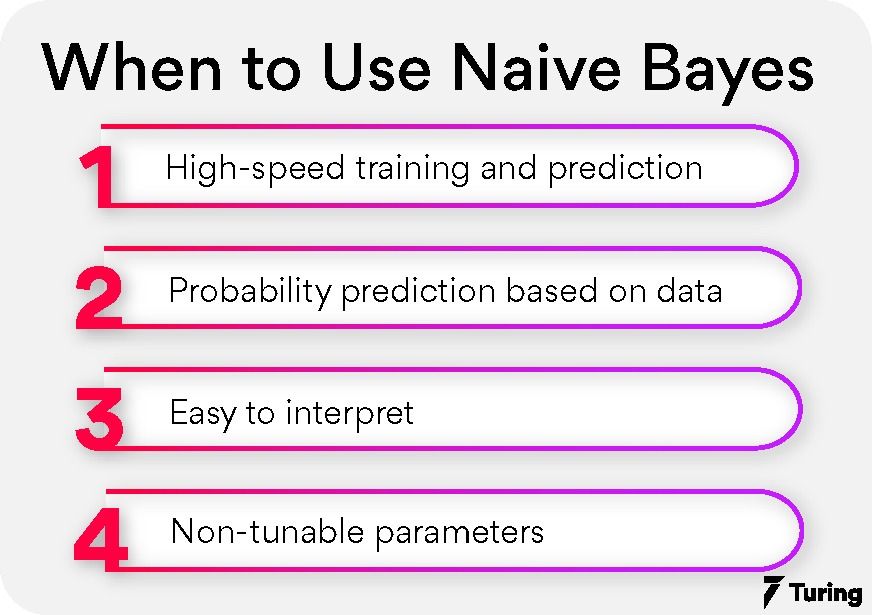 An initial baseline classifier based on a Naive Bayesian classifier offers these advantages. In case it performs well, you will have a classifier for your problem that is intuitive and very fast to interpret.

With some basic knowledge of how well they should perform, you can explore more sophisticated models if it does not perform well initially

How to execute Naive Bayes in Python

Let's get started and upload the libraries first:

We will now load the data (training and test data):

Let's count the classes and samples:

You will get output as:

As a result, we have a 20-class (which is the by default no. of classes in which the algorithm divides the data) text classification problem with a training sample size of 11314 and a test sample size of 7532 (text sentences).

Let's take a look at the third training sample:

You should see something like this printed out since our data is texts (specifical emails):

Next, we will build a Naive Bayes classifier and train it. Our example will generate a matrix of token counts based on a collection of text documents. To do so, we will use the make_pipeline function.

We can predict the labels of the test set in the las line of the code.

Here are the predicted category names:

Let's construct a multi-class confusion matrix to check if the model is suitable or if it only predicts certain text types correctly.

Naive Bayes is a powerful machine learning algorithm that you can use in Python to create your own spam filters and text classifiers. Naive Bayes classifiers are simple and robust probabilistic classifiers that are particularly useful for text classification tasks. The Naive Bayes algorithm relies on an assumption of conditional independence of features given a class, which is often a good first approximation to real-world phenomena.

Naive Bayes is becoming a popular text classification technique that can quickly provide a somewhat accurate "guess" as to the category of a document. It is a probabilistic classifier and can give very impressive results. It also scales nicely, allowing you to process thousands of documents. Its ability to keep up with new words makes it more accurate in predicting categories than other popular methods.

K-means clustering identifies clusters of data objects within a given data set using an...

Can Naive Bayes be used for classification?

A Naive Bayes model can be easily constructed with large data sets and can be useful for many applications. Most developers prefer this model due to its simplicity. It also beat other highly sophisticated classification models in the context of performance.

Due to the better results in multi-class problems, this model gets commonly used for text classification. Identifying spam e-mail and social media sentiment analysis are two main objectives for preferring this model.

What are Naive Bayes in text classification?

The Naive Bayes Classifier is a collection of multiple algorithms based on the Bayes theorem. Each algorithm works on the same principle of classifying each pair of features separately.

This Naive Bayes classifier is a probabilistic machine learning model. This is mainly used to analyze and classify texts using machine learning. Text analysis is a vast field for ML algorithms.

How is Naive Bayes algorithm used for classification?

The Naive Bayes is one of the easiest classifier that gets used to build a quick machine learning model for predictions. This algorithm uses probability classification. It means this classifier makes a prediction based on the probability of a given object.

This theorem also goes by the names Bayes' Rule and Bayes' Law, which determines the probability of a foreknowledge assumption. It depends on conditional probability.