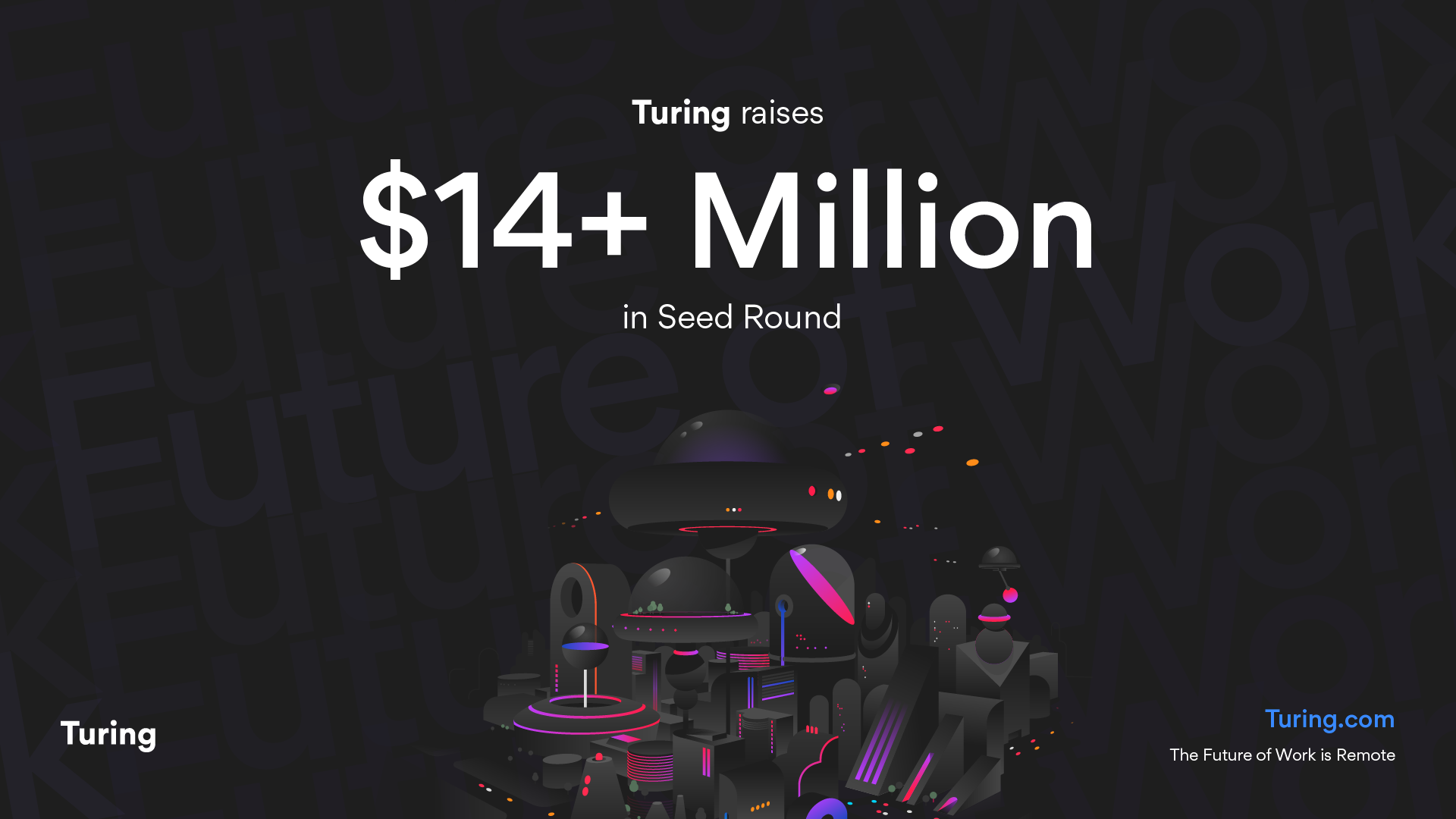 Today marks a giant milestone in the history of Turing. The company is delighted to announce its oversubscribed seed round of $14 million. Turing is proud of the support we’ve received from top-tier VCs and prescient investors who share our belief that the future of work is boundaryless and that remote-distributed teams democratize opportunity for talented developers wherever they may live.

According to Turing CEO and Co-Founder, Jonathan Siddharth, “We were already growing fast prior to the coronavirus crisis. I think remote work is here to say. COVID has accelerated a shift that was already underway. We’ve seen a 5-year shift play out in the last 5 months. A lot of companies that want to go remote-first still face key obstacles on sourcing, vetting & managing remote developers. It’s really hard to find silicon valley caliber developers who are remote. It’s hard to evaluate developers who are remote. It can also be frustrating to communicate with remote developers across different timezones. Often the right kind of daily, weekly syncs don’t happen. It’s hard to manage performance. That’s why we built Turing. Turing is creating a new category of verticalized remote work in the cloud. It’s a cloud of developers, that’s sourced by software, vetted by software, matched by software and managed by software. It’s AWS for Talent. What if, you could “push a button” to hire and manage remote developers?”

The company will use the additional capital to keep scaling the business, investing in continued automation, AI initiatives to source, vet and manage remote developers.

According to Ashu Garg, General Partner at Foundation Capital, “When the Indian outsourcing and IT revolution was in its infancy, I predicted that the market would grow 100X over the next decade. People thought I was crazy at the time and, in retrospect, my prediction seems like a gross underestimation. I feel the same way about Turing. We are creating a new category around remote and distributed work. The future of work is remote, and we’re just getting started.”

Turing was founded based upon the idea that talent is universal while opportunities are not. The company’s mission is to find the best developers from all over the world and match them with companies building world-changing products.

Turing is co-founded by Jonathan Siddharth and Vijay Krishan. The duo discovered the power of using remote teams to build a company during their last venture, Rover, which the two started while still attending Stanford. SaysTuring CTO, Vijay Krishnan, “The cost and challenge of competing with Google, Facebook, Apple, and other giant Silicon Valley companies led us to source highly skilled remote developers from around the world.  What we learned building a company with a fully distributed team convinced us that remote-distributed teams are the future of work.”

Their experience at Rover provided the skills and knowledge that made them the perfect team to launch Turing. Turing’s data science powered platform offers a vertically-integrated solution for companies to spin up engineering teams the same way AWS lets companies instantly add additional server capacity.

Looking towards the Future

Turing will create 1000 jobs for remote engineers by 2022. The goal of the business is to provide Silicon Valley caliber jobs to the top 1% of developers from all over the world, help businesses scale at the push of a button, and level the playing field for the world’s best developers.

Turing’s founders believe that the future of tech is boundaryless. The company is powering the remote revolution by making it fast, simple, and cost-effective to add exceptional talent to any team, and then to monitor and manage your people no matter where they live.

Jonathan is the CEO  and Co-Founder of Turing.com. Before starting Turing, Jonathan was an Entrepreneur in Residence at Foundation Capital, following the successful sale of his previous AI company, Rover that focused on deep personalization of content recommendations. Jonathan received the best Masters Thesis Award in Computer Science at Stanford University where he specialized in Artificial Intelligence while building AI-enabled products. In his spare time, Jonathan likes helping early-stage entrepreneurs scale companies and tinkering with AI projects.

Vijay Krishnan is the Co-Founder & CTO of Turing.com. At Turing Vijay leads data science efforts that inform automation in vetting, matching, and managing remote developers. Before co-founding Turing, Vijay was an Entrepreneur in Residence at Foundation Capital following the successful sale of his last AI company, Rover, a business he co-founded while at Stanford. Before Rover, Vijay was a scientist at Yahoo’s Data Mining and Research group. His work led to patented methods to increase Yahoo’s large-scale text categorization accuracy with profound implications for search relevance, ad-matching, user, and content personalization efforts.

Vijay has a master’s degree in computer science from Stanford University, specializing in AI. Vijay is recently married and lives in Palo Alto, California. You can find Vijay on Twitter and LinkedIn.

Oliver Starr
Oliver Starr is the Special Advisor to the CEO at Turing. He shoulders the social media, public relations, copywriting, and blog efforts in the organization.
Related Blog Posts
Comments (2)