Mohak is a content writer and strategist. He has developed content in tech, OTT, and travel niches. When he is not writing, he’s probably daydreaming about getting on a spacecraft and exploring the universe.

In this blog post, we will learn about testing automation using Selenium with Python and understand the types of testing you can perform with Selenium.

Today, automation has taken over every aspect of technology. Subsequently, software testing trends have also evolved to keep pace. Tech stacks like Selenium with Python have made automation easier for scraping, iteration, or testing applications. Manual testing of software serves its purpose in small-scale projects. However, testing teams need to run a huge number of cross-functional tests for large-scale application development and frequent updates. This is where the power of Python and frameworks like Selenium for automation comes in handy.

In this blog post, we will go through the step-by-step process of automated testing by using Selenium with Python.

Selenium is a free, open-source automation testing suite for web applications across different browsers and platforms. Selenium is a framework that allows you to interact with HTML elements from any website. With Selenium, we can interact with the elements rather than just extracting information from a webpage.

For example, we can run automated scripts to test various web app components using Selenium. Selenium works with any major programming language, including Python, C#, Java, JavaScript, and others.

In the automation kingdom, Python language is like a lord, ruling the code peasants and turning complex snippets of automation into simple functions. Developers find Python to be an automation wizard because of the following reasons.

Below, we will perform basic-level front-end tests using Selenium with Python.

First, you’ll need to install Python on your system (Windows/Mac OS/Linux). For this tutorial, we’ll be using Windows.

If you use the command line prompt, run the python command to get started. If you’re using an IDE, simply create a new Python file.

Use the “pip” command in your terminal to install the Selenium package for Python.

Selenium works with all major browsers, including Chrome, Firefox, Internet Explorer, Safari, and Edge. We are using Chrome for this tutorial.

>> To find the version of Chrome, you can go to help → About Google Chrome and find the Chrome version.

Find the version of Chrome

Choose the option for the system you’re using and make sure to download the zip file for your system solely; otherwise, it might lead to misunderstanding.

Once downloaded, extract the file and place it in a specific location on the operating system.

We recommend placing it in the safe directory, which is not often accessed like ‘Program files’ in C-disk.

Now we have everything in place, let’s connect our script with the web browser.

Connecting Selenium with Python and browser

To test Selenium installation, type ‘import Selenium’ in a Python window or Python script. If you don’t get any errors, you’re good to proceed.

If you run into any issues, simply repeat the previous steps.

(Tip: When executing any module, do not save the file with the module name; otherwise, a ‘circular import error’ may occur.)

So, this is how we connect Selenium, Python, and the web browser. Now, let’s run a basic test to see how we can alter various components of the product’s front-end.

Now that we have all the prerequisites and have tested them to ensure they are working properly, we can begin working on the website’s components using Selenium with Python.

Selenium provides a plethora of methods for interacting with HTML components. We are engaging with the search query here to provide input and test the keys. Any clickable elements (buttons, forms, pointers) on the webpage can interact with Selenium’s built-in functions.

As you can see, we searched for distinct elements (id, class) for each of our functions; Selenium gives various choices for interacting with items based on their nature.

However, using the “id” is encouraged because “id” is unique for each element. We can import the time package and add delays between the tasks to see the progression.

Here is an example of the complete code for our testing. 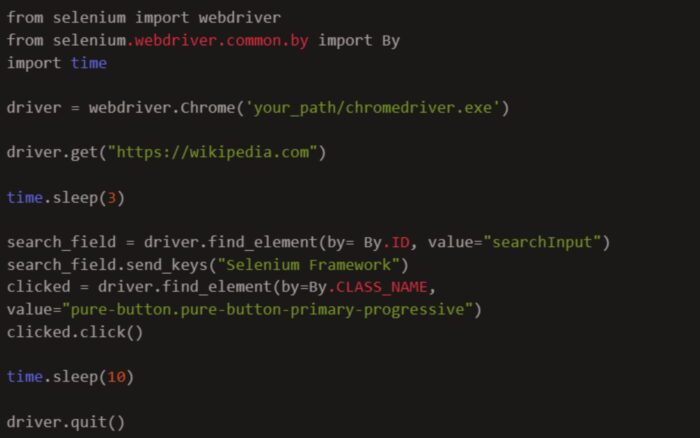 It will navigate to the official page of Wikipedia, wait 3 seconds, then access the search box by its “id” and fill it with the text “Selenium Framework,” then identify the search button by its class name and click it using Selenium’s built-in function “click.”

We can also view the results on our terminal by using the print function.

Testers can use Selenium with the Jenkins continuous integration platform to automatically test tests as part of their build process. They can use it in combination with cloud-based testing platforms to run tests on various browsers and operating systems. 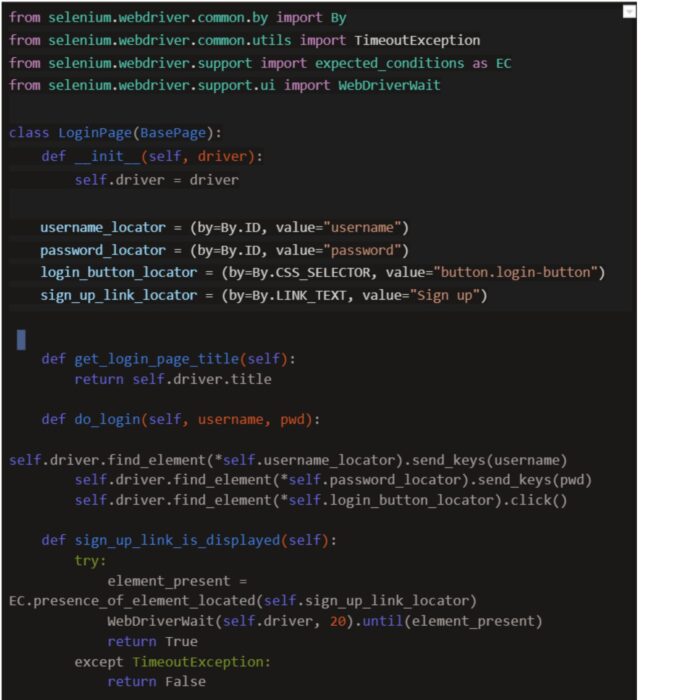 Let’s look at the different types of Selenium automation testing below.

This test reruns already finished tests to check that codebase modifications have not generated new problems or regressions.

As opposed to executing these tests manually, Selenium can automate the execution of a suite of regression tests.

This test ensures that an application functions properly and meets the requirements set out for it.

Selenium can automate the execution of functional tests by mimicking user activities such as button clicks and form filling and ensuring that the application reacts as intended.

Integration testing ensures that different components of software programs work when linked together.

Performance testing ensures that the software can manage the predicted load and amount of traffic.

Selenium can perform performance testing by emulating many user activities and evaluating the application’s response time.

Selenium can organize the execution of tests on many browsers, guaranteeing that the application works in various browser environments.

Overall, Selenium is a useful tool for testing online applications, and Selenium with Python makes it particularly appealing to testers who prefer to work in a familiar language.

Despite its shortcomings, Selenium is widely used in the business and has a large community of users and developers continually striving to improve and extend the software.

If you’re a software developer confident in your tech stack, Turing has a wide pool of remote opportunities for you. Click on the Apply for Jobs button and land your dream remote job today.