A Guide to Content-Based Filtering In Recommender Systems 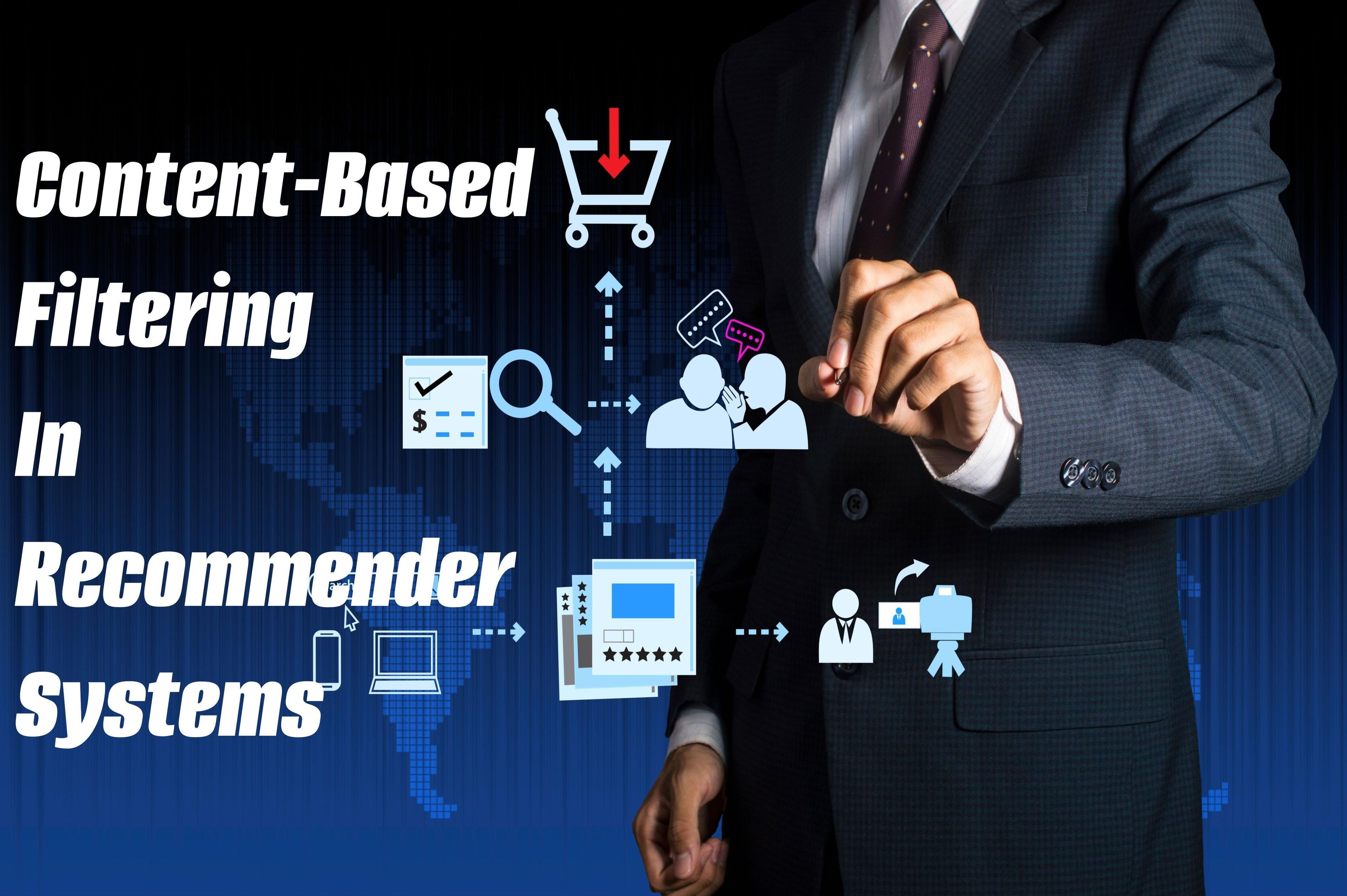 Recommender systems play a crucial role in our online lives. Popular media and service platforms like Netflix, YouTube, Amazon, Facebook, etc., spend a significant percentage of revenue to deliver quality and personalized adverts and recommendations to drive sales and engagement. Users and customers benefit as well as they can buy products suited to their tastes and discover new, relevant ones. There are two types of recommender systems used for this: collaborative and content-based filtering. In this article, we’ll be looking at both and focusing on the content-based filtering algorithm.

When there are numerous options to choose from, it’s natural to be confused, whether it’s selecting a flavor of ice cream or a model of headphones. Recommendation systems help by eliminating the options that do not align with our taste or past behavior. The more they have access to our purchasing history and patterns, the more accurate the recommendations are.

A downside to this approach can be a lack of good suggestions for new customers since the system has no previous data on their habits. To tackle this situation, other methods can be used such as explicitly asking the customer what type of content they want to view or suggesting items that are popular in their geographical location or age.

There are two types of recommender systems:

Collaborative filtering-based recommender systems solely rely on past interactions between users and items in order to suggest new products. The features of every individual item are not considered.

In collaborative filtering, the historical data of the user interacting with the items is recorded and stored. This is usually represented by a matrix known as user-item interaction matrix, where rows represent users and columns represent the items. Similar users are grouped and all their interactions are considered when making recommendations to the target user.

An underlying model is used to presuppose the interactions. This model is later tuned and used to rank items the user has not interacted with yet. Items with a higher compatibility score are recommended to the user.

Content-based filtering in recommender systems leverages machine learning algorithms to predict and recommend new but similar items to the user. Recommending products based on their characteristics is only possible if there is a clear set of features for the product and a list of the user’s choices.

The recommender system stores previous user data like clicks, ratings, and likes to create a user profile. The more a customer engages, the more accurate future recommendations are.

To understand this, let’s use a simple example of how a content-based recommender system might work to suggest movies.

Let’s suppose there are four movies and a user has seen and liked the first two. 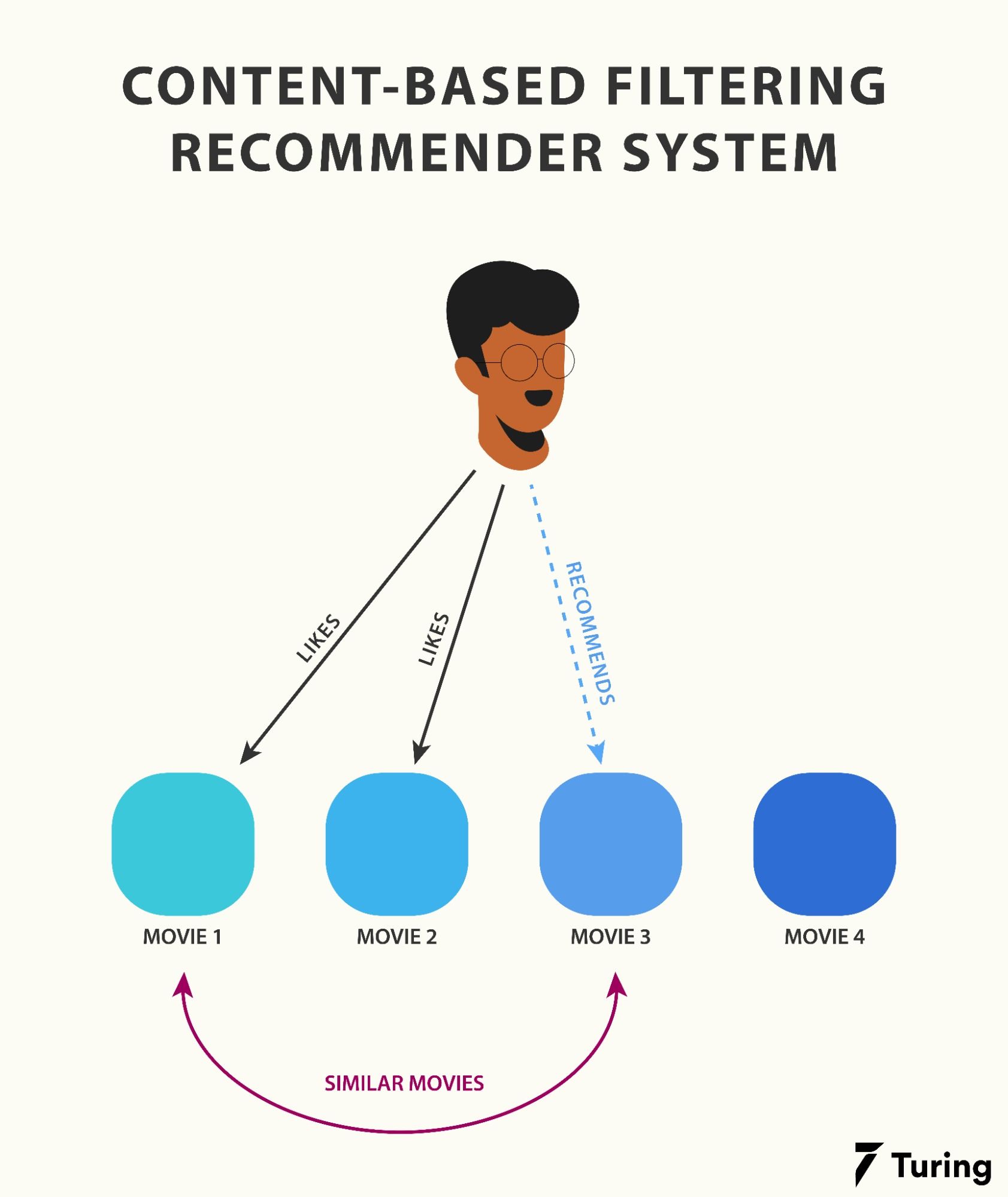 The model automatically suggests the third movie rather than the fourth, since it is more similar to the first two. This similarity can be calculated based on a number of features like the actors and actresses in the movie, the director, the genre, the duration of the film, etc.

A utility matrix contains the interaction information between the user and the preferred items. Data gathered from the day-to-day activities of the user is saved in a structured format to find the likes and dislikes of different items the user has interacted with. A value is assigned to every interaction, known as the ‘degree of preference’.

A few values are missing in the above example of a utility matrix. This is because some users do not interact with every item available on the platform. Note that the goal of the recommender model is to suggest new items based on this utility matrix.

A user profile is the collection of vectors that define a user’s preferences. The profile is based on the activities and tastes of the user; for example, user ratings, number of clicks on different items, thumbs up or thumbs down on content, etc. This information helps the recommender engine to best estimate newer suggestions.

For content-based filtering, we require the different features of every individual item to represent their essential qualities. Going back to the movie example, some necessary attributes of movies that will help the recommender system distinguish between them are actors and actresses, director, year of release, genre, IMDb ratings, etc.

Here, the cosine distance between the user and item vectors is used to determine preference. Let’s understand with an example: Our target user enjoys watching action movies and somewhat dislikes horror and thrillers. The vector for action movies has positive values and the vector for horror movies has a negative value for that particular user.

Now, consider a new movie released in the sci-fi action genre. Since our user prefers action movies, the cosine angle between the movie vector and the user vector will be a large positive fraction, resulting in a smaller angle which means it's a good recommendation for our user. If the cosine distance is large, we generally ignore the item since it's a bad recommendation.

In this article, we discussed content-based filtering which is a type of recommender system. We also briefly touched on collaborative filtering, another class of recommender systems. We saw that the content-based approach employs two methods to make the suggestions: classification model approach and vector space, both of which have their advantages and disadvantages.

Recommender systems are used by organizations and companies to automate the process of suggesting new content and products to their consumer base. They are widely used in the current e-commerce/online business environment. The next time you are suggested something online that you seem to like, you know exactly how it ended up on your feed!

When developers create mobile apps, they need to build and maintain the UI...

In the flutter hooks tutorial, we are going to know about how you can...

The CAP theorem stands for Consistency, Availability, and Partitions and expresses...

How Does Collaborative Filtering Work in Recommender Systems?

Collaborative filtering recommender systems have played a significant role in the rise...

What are content-based filtering recommender systems and where are they used?

Content-based filtering uses item features to suggest additional products that are similar to what users already like by leveraging their past behavior or explicit feedback. It employs machine learning algorithms to group similar items together based on their intrinsic features.

What is a hybrid recommendation system?

In the hybrid approach, both collaborative and content-based techniques are used to make recommendations. This helps the recommender engine to get the best of both worlds. Using the methods separately leads to several limitations like the cold start problem, lack of diversity in suggestions, etc. With a hybrid approach, these impediments are easily avoided and more accurate recommendations are possible.

What are the main methods of content-based recommendation?