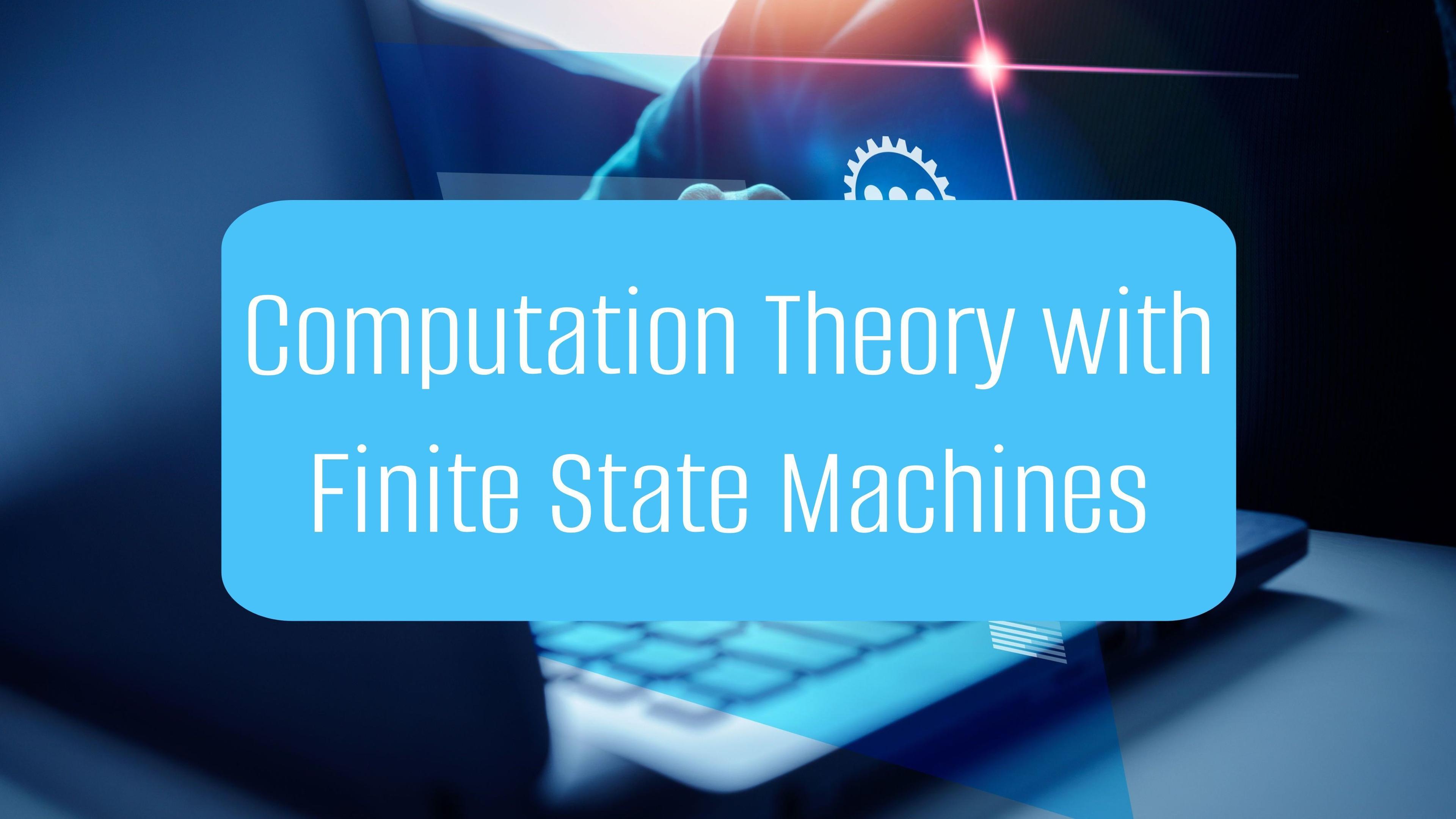 Automata theory or the theory of computation is a theoretical division of mathematics and computer science. It deals with the logic of computation concerning simple machines. An automata theory is a finite state machine, which is best known as finite automation. Automata enable scientists in understanding how machines compute functions and solve problems.

The major motivation behind the development of the theory of computation is to develop methods for describing and analyzing the dynamic behavior of discrete systems. Automata first originated from the word Automaton which is related to Automation. Symbols (characters), strings, and alphabets are the fundamental terminologies that can be understood from the theory of computation. Let’s get into finite state machines in detail.

What is a finite state machine?

A finite state machine is a conceptual tool for designing systems. It will process a sequence of inputs that will change the state of the system. When you process all the inputs, you must observe the last state of determination of the system. And also verify whether the input sequence was acceptable or not.

Finite-state automaton (FSA), finite state machine (FSM), or just a state machine is a mathematical computation model. It is an abstract machine that can be in one of a finite number of states at any given time.

You can observe the behavior of the state machines in many devices in modern society which will perform a predetermined action sequence that depends on the sequence of events that are present.

The finite state machine examples can be vending machines that dispense products when the proper coin combinations are deposited, traffic lights that can change the sequence of cars waiting, moving, and stopping can be determined, and elevators whose sequence will determine stops where to stop as per the passengers’ request.

Components of the finite state machine

Below are the components which are incorporated into the finite state machine:

The initial state is the starting point of our system. It is usually drawn with an arrow pointing to them.

The alphabet is also known as the language which is a set of all the valid inputs we provide. 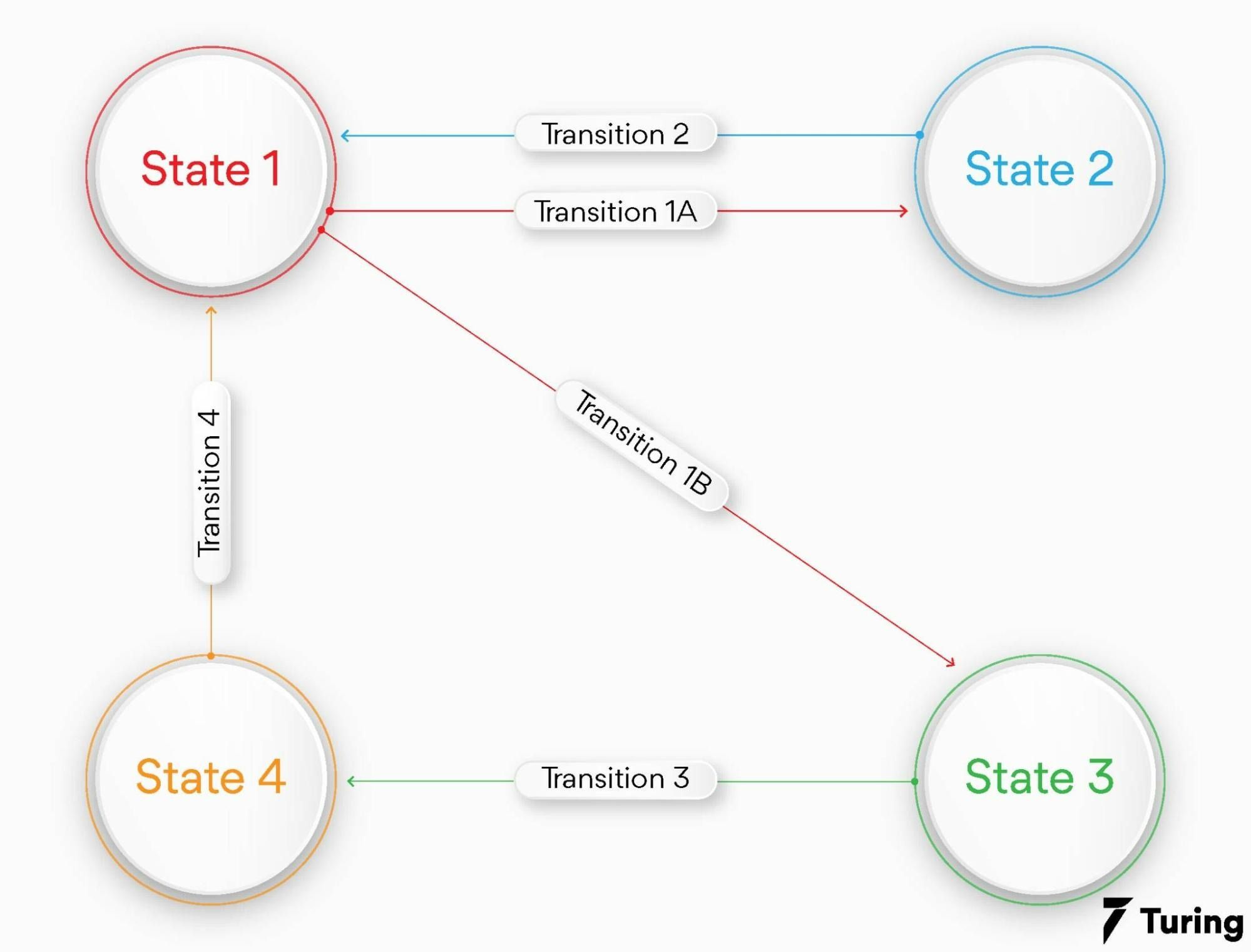 A set of known states denotes that there should be a finite amount of states in our systems. But only one state will be active at a specified time. It is represented by circles.

A set of accepting states is a subset of known states. It indicates whether the input we have processed is valid or not. Accepting states can be represented with a double circle.

The transitions are rules which will dictate how the machine moves from one state to other. It is usually represented by two states connected by a line.

Demonstration of the binary parser

Let us create a finite state machine that parses a binary sequence where each time we get a 1, we will immediately get a 0 at the same point. For example, 1010 is a valid input but it is not the case for 1101010 or 1011001. The finite state machine will be like the below: 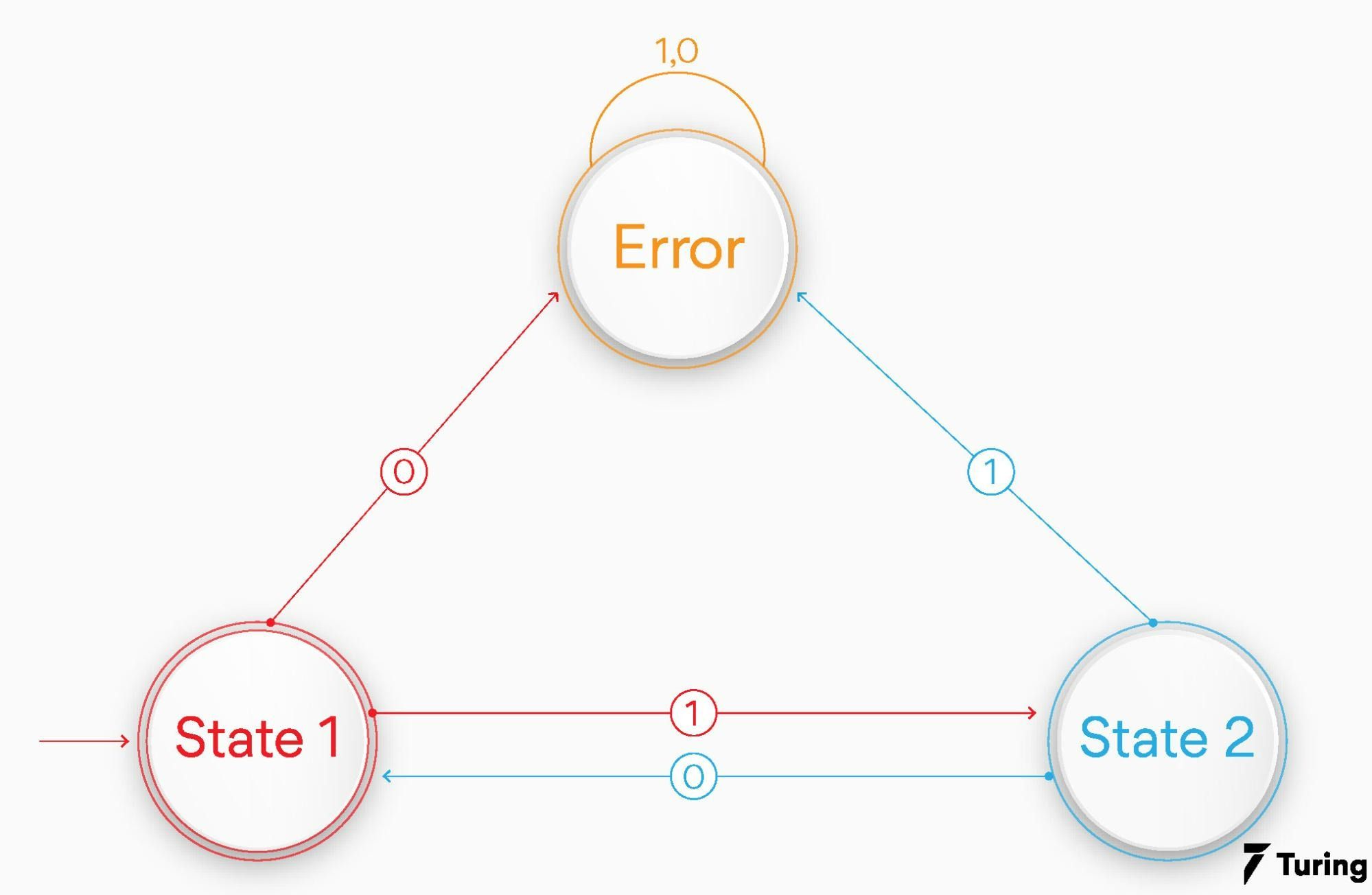 Many software implement FSM for managing some aspects of states. We can implement a finite state machine in Python and use codes to verify the inputs for a set of transitions and states.

With this method, you can validate that the transition rules are set up with valid states. Now, you can use the accepts() method with the list of inputs for determining if your machine will be accepted. Now, run a test with the binary parser which you have previously created with the below code:

FSMs are commonly used in real-world systems which extend beyond string parsing, and even software systems. Below are some examples that will provide you with a logical explanation of the working of the same.

We can take the most simple example of a traffic light system using FSM. Let us look at each core component and identity what it means:

Accepting States: The traffic light runs indefinitely, so there won’t be any accepting states for this model.

Another example is Enemy AI. FSM will allow us in mapping the flow of actions in a game’s computer-controlled players. We can take an example of an action game where the guard parols an area of the map. We can have an FSM with the below components:

Accepting states: An enemy bot will no longer accept input when it is Deceased, so our Deceased state will be our accepting state.

Alphabet: We can use a string constant for representing a world state like Full Ammo, Low Ammo, Full Health, Player Approaches, Low Health, Player Runs, and No Health.

Transitions: It is a tad complex model when compared to a traffic light, so we will have separate transitions for each state at a time:

The FSM representation of the same is as follows: 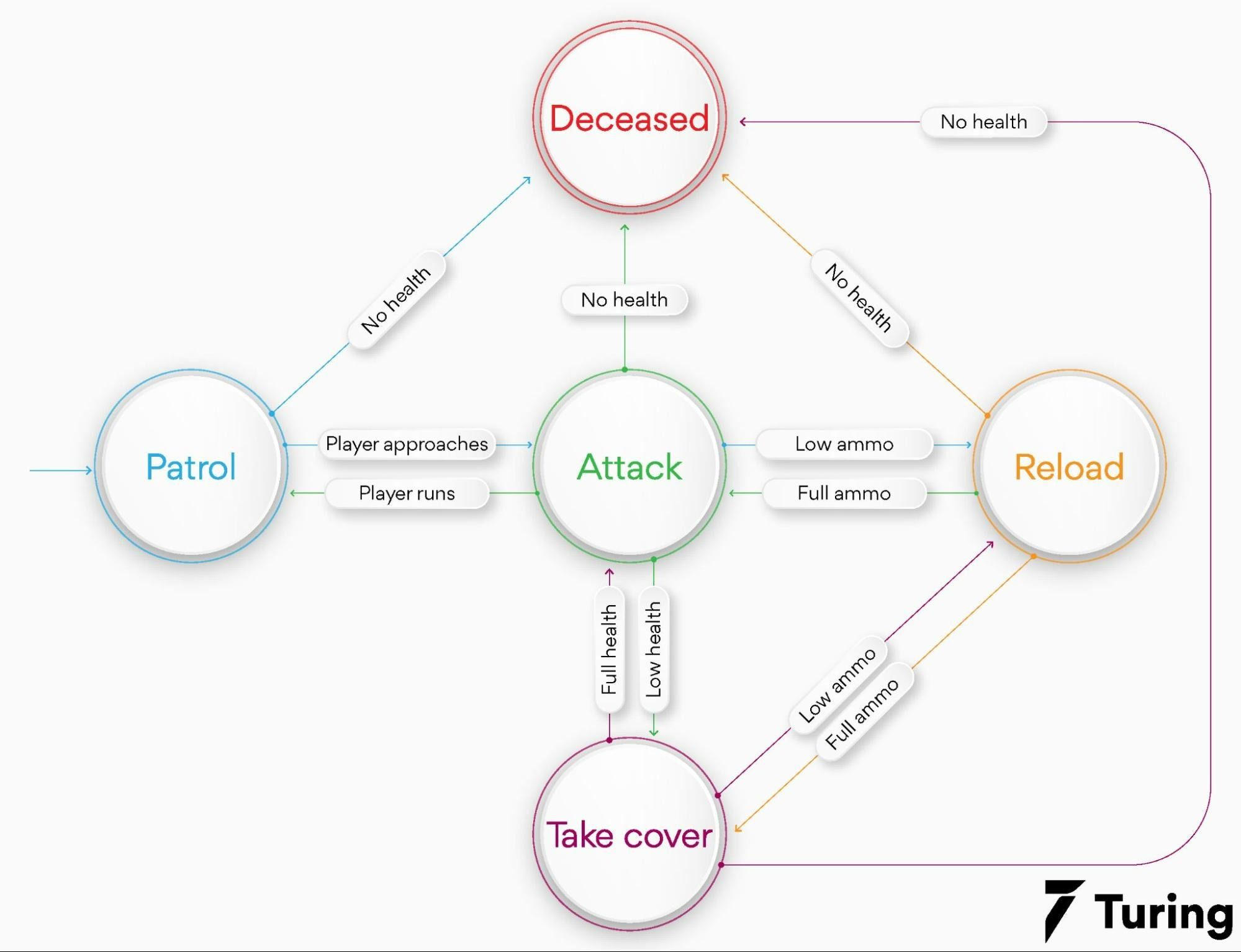 The major benefit of FSM is its simplicity, but it also becomes one of its disadvantages. Systems that need an indeterminate number of states can’t be modeled by FSM. Earlier the FSM which accepts the string ‘10’ for any number of iterations was allowed.

When we have to accept a string of any number of 1s followed by the same number of 0s, we might not be able to create an FSM. An FSM will not keep track of the number of states you have visited, it is only aware of your current state.

With the Pumping Lemma, we can now understand all the essential properties of any programming language. But rather than a classification of languages being there, no FSM can be built.

The finite state machine is a theoretical framework we can use for modeling systems. When you have a known set of states, the accepting state, the starting state, and the rules for the transitions between states, you can easily determine if a sequence of inputs can be accepted.

The limited number of states which can be modeled doesn’t make these abstract machines suitable for all systems, as in the Pumping Lemma. So, finite state machines can be used in many real-world applications and it is already quite popular.

1. What is a finite state machine in the theory of computation?

2. What is the application of TOC?

Here is some application of TOC:

- Complexities in Natural Selection in Biology

3. Why are finite machines called so?

Imagine this: you’re using Python and happen to store a few non-Python files alongside Python ones...