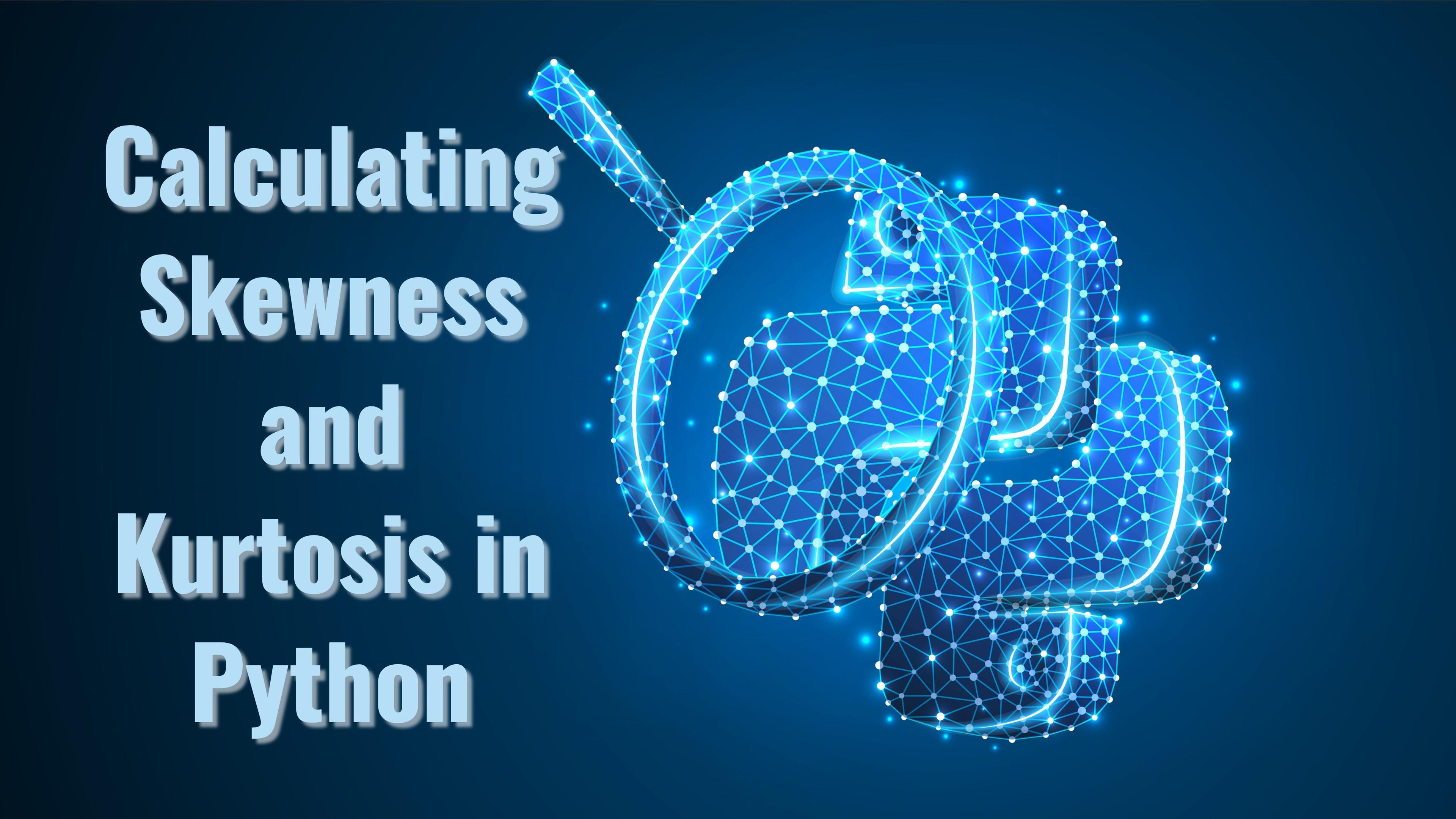 Skewness is a statistical measure of asymmetric distribution of data while kurtosis helps determine if the distribution is heavy-tailed compared to a normal distribution.

The most common type of data and probability distribution is a normal distribution. It is defined by a symmetric bell-shaped curve.

Normal distribution can become distorted under significant causes. It is calculated using skewness and kurtosis, which this article will explore in detail with respect to Python.

A continuous distribution of random values is called a normal distribution. A random value is one that depends on the outcome of a random event. For example, you either get heads or tails when you flip a coin. But you cannot determine with certainty what you will get.

The number of values that the probability has are infinite and will form a continuous curve. So, instead of writing the probability variables, you can define the range in which they lie.

When the continuous probability distribution curve is bell-shaped like a hill with a well-defined peak, it is a normal distribution. The peak should be at the mean and the data must be symmetrically distributed on both sides. The median, mode, and mean are equal and lie closer together.

The distribution of skewness values is as below:

Skewness is mostly calculated using the Fisher-Pearson Coefficient of Skewness. However, there are many more ways to calculate it such as Kelly’s Measure, Bowley, and Momental.

Skewness looks at the measure of skewness as the third standard moment of distribution. It might seem daunting to understand at first, but it will become easier when you learn the steps below.

The Kth moment of a distribution is calculated as:

To correct for statistical bias, you need to solve the adjusted FP standardized moment coefficient as: 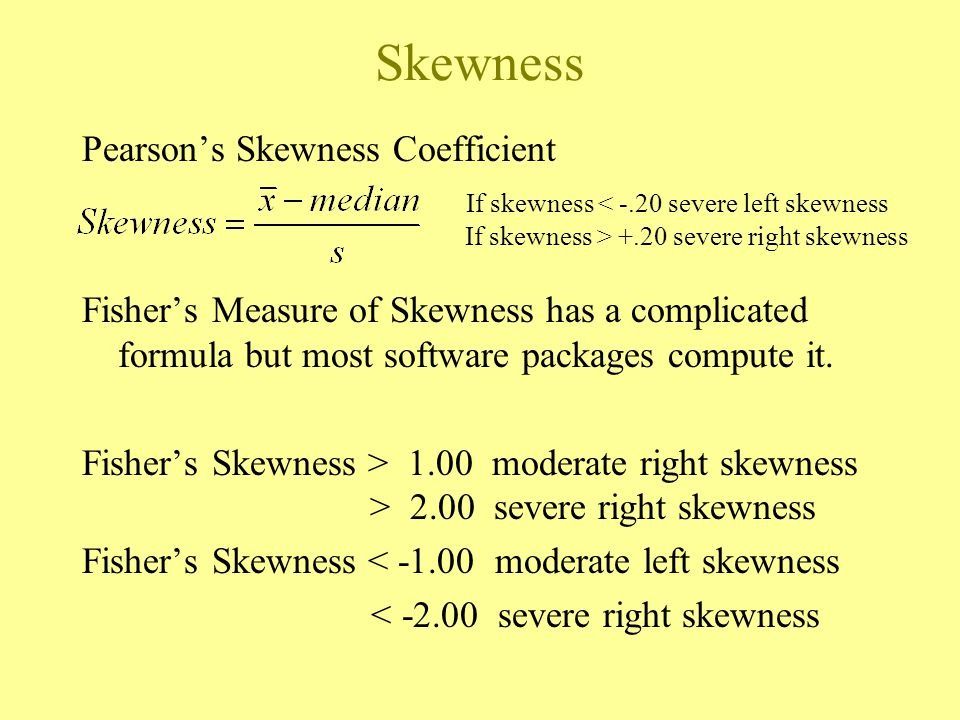 By calculating the mean of X, we can get:

Solving it with the skewness formula:

The Fisher-Pearson Coefficient of Skewness is equal to 0.745631. You can see that there is a positive skew in the data.
Another way of checking is to look for the mode, median, and mean of these values. 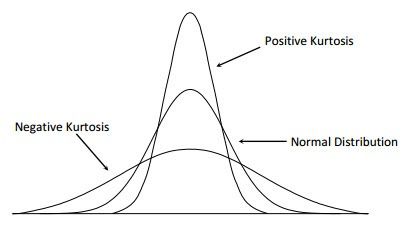 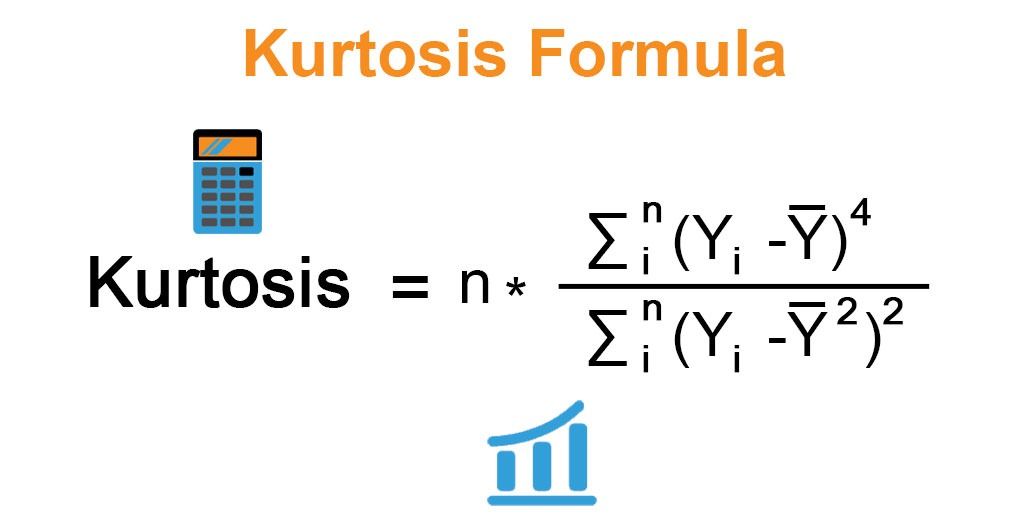 By calculating the mean of X, we can get:

You can use this value in the kurtosis formula to get the final answer.

Calculating skewness and kurtosis in Python

SciPy Library is an open-source science library that provides in-built functions for calculating skewness and kurtosis. You can import it with the following code:

The next step is to create a dataset. The code below shows how.

Use the following syntax to calculate the skewness by using the in-built skew() function.

where array represents the input object that contains the elements, axis signifies the axis along which we want to find the skewness value, and bias = True or False, based on the calculations that are determined upon the statistical bias.

The skewness value of the dataset will be along the axis with this return type. It will signify that the distribution will be positively skewed.

Calculate the kurtosis with the help of the in-built kurtosis() function using the syntax below:

where the array is the input object that has the elements, and the axis represents the axis along with the kurtosis value that needs to be measured.

Fisher = True when normal is 0.0. It will be False when the normal is 3.0. Bias is True or False, based on statistical bias.

The value of kurtosis for the dataset will be the return type. It will signify that the distribution will have more values in the outputs when compared to the normal distribution.

The existence of random causes that influence every known variable on earth is normal. But what happens if a process comes under the influence of significant causes? This will modify the shape of the distribution and that’s when we need a measure like skewness to capture it.

The image below shows a normal distribution, which is a symmetrical graph with all measures of central tendency in the middle.

However, if we find an asymmetrical distribution, we need to analyze how to detect its extent. The graph below shows the measures of central tendency.

We should derive a measure that will capture the horizontal distance between mode and mean. It’s important to remember that the higher the skewness, the farther apart these measures will be.

The formula for skewness is as below:

With division by standard deviation, we can enable the relative comparison among distributions on the same scale. Mode calculations for small datasets are not important, so arrive at a robust formula for skewness and replace mode with the derived calculation from the mean and median.

Replacing the mode value in the formula, we get:

You should consider pulling the normal distribution curve from the top and understand the shape of the impact. There are two things to notice: the peak of the curve and the tails. The kurtosis measure will be responsible for capturing this.

The kurtosis calculation is complex so it’s important to stick to the concept for visual clarity.

We can calculate excess kurtosis by keeping zero as a reference for normal distribution with the formula below:

This article will cover the basics of deep learning, Keras installation, its models, layers, modules, and applications...