An Overview of Bayesian Networks in AI Developing probabilistic models is challenging in AI due to the lack of information about the relationship or the dependence between random variables. Even if it is present, calculating the conditional probability of such an event can be illogical. In this scenario, developers take a common approach where they make assumptions, such as that all random variables in the model are conditionally independent. This forms the basis of Bayesian networks in artificial intelligence, which are types of probabilistic models that involve random variables that are conditionally independent.

In this blog, we will examine the working of Bayesian networks in AI with an example and explore its applications.

A Bayesian network is a type of graphical model that uses probability to determine the occurrence of an event. It is also known as a belief network or a causal network. It consists of directed cyclic graphs (DCGs) and a table of conditional probabilities to find out the probability of an event happening. It contains nodes and edges, where edges connect the nodes. The graph is acyclic - meaning there is no direct path where one node can reach another. The table of probability, on the other hand, shows the likelihood that a random variable will take on certain values. 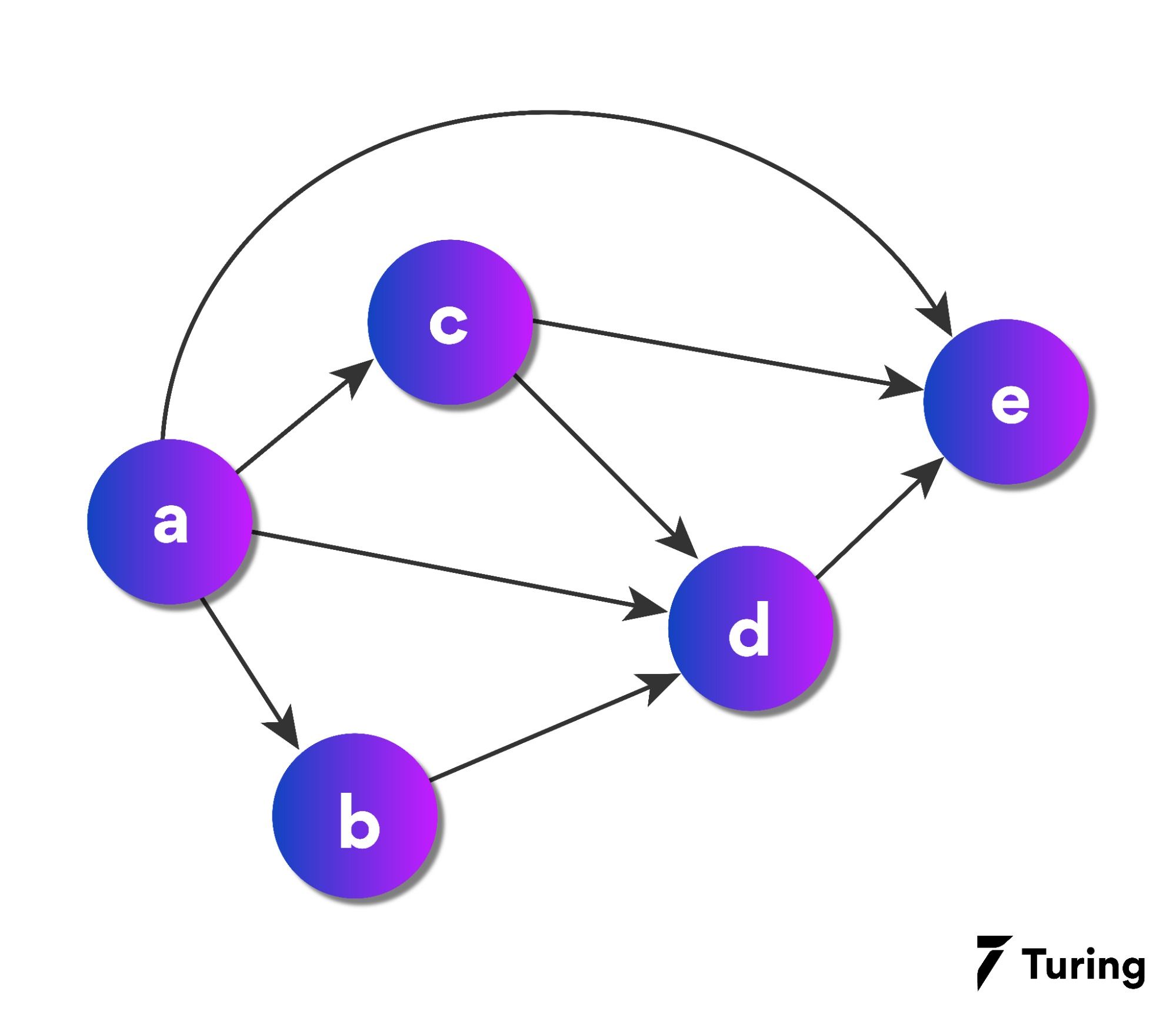 The above image illustrates a directed acyclic graph. There are five nodes, namely, a, b, c, d, and e. From the above graph, we can get the following information:

It is important to note the relationships between the nodes. Bayesian networks fall under probabilistic graphical techniques; hence, probability plays a crucial role in defining the relationship among these nodes.

There are two types of probabilities that you need to be fully aware of in Bayesian networks:

The rows in this table correspond to all possible combinations of parent and child states. In order to find out how likely it is that a certain event will happen, we need to sum up the probabilities from all paths of that event.

Here’s an example to better understand the concept.

You have installed a burglar alarm at home. The alarm not only detects burglary but also responds to minor earthquakes. You have two neighbors, Chris and Martin, who have agreed to get in touch with you when the alarm rings. Chris calls you when he hears the alarm but sometimes confuses it with the telephone ringing and calls. On the other hand, Martin is a music lover who sometimes misses the alarm due to the loud music he plays.

Based on the evidence on who will or will not call, find the probability of a burglary occurring in the house.

In a Bayesian network, we can see nodes as random variables.

There are five nodes:

Links act as causal dependencies that define the relationship between the nodes. Both Chris and Martin call when there is an alarm.

Let’s write the probability distribution function formula for the above five nodes.

Now, let's look at the observed values for each of the nodes with the table of probabilities:

Based on the above observed values, the conditional values can be derived and, therefore, the probability distribution can be calculated.

Conditional values for the above nodes are:

What is the probability of both Chris and Martin calling, but neither a burglary nor an earthquake has occurred?

To calculate the joint distribution, we use the formula:

Applications of Bayesian networks in AI 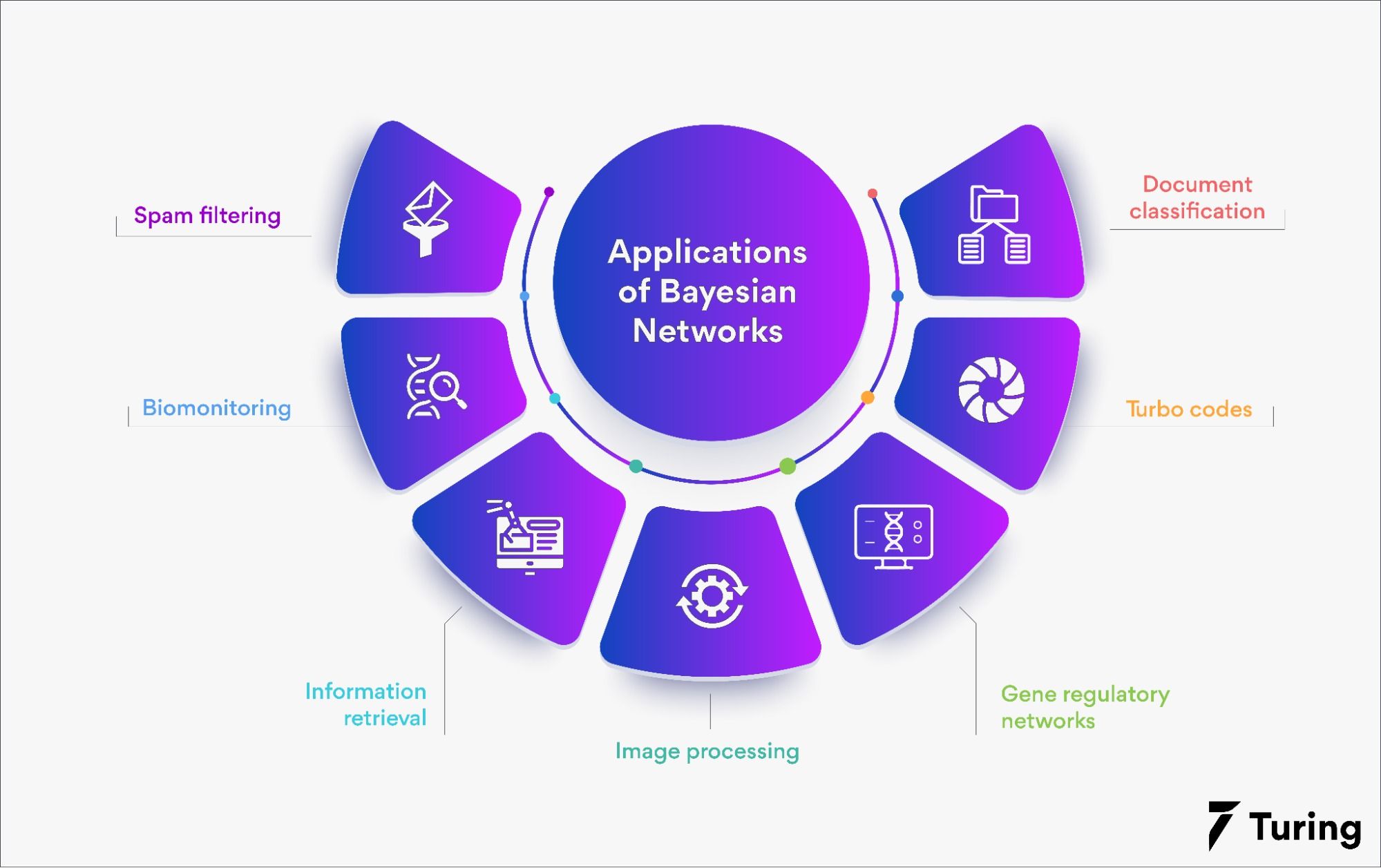 Bayesian networks find applications in a variety of tasks such as:

1. Spam filtering: A spam filter is a program that helps in detecting unsolicited and spam mails. Bayesian spam filters check whether a mail is spam or not. They use filtering to learn from spam and ham messages.

2. Biomonitoring: This involves the use of indicators to quantify the concentration of chemicals in the human body. Blood or urine is used to measure the same.

4. Image processing: A form of signal processing, image processing uses mathematical operations to convert images into digital format. Once images are converted, their quality can be enhanced with more operations. The input image doesn’t necessarily have to be in the form of an image; it could be a photograph or a video frame.

7. Document classification: This is a problem often encountered in computer science and information science. Here, the main issue is to assign a document multiple classes. The task can be achieved manually and algorithmically. Since manual effort takes too much time, algorithmic documentation is done to complete it quickly and effectively.

We have seen what Bayesian networks in machine learning are and how they work. To recap, they are a type of probabilistic graphical model. The first stage of belief networks is to convert all possible states of the world into beliefs, which are either true or false. In the second stage, all possible transitions between states are encoded as conditional probabilities. The final stage is to encode all possible observations as likelihoods for each state.

Why are Bayesian networks important in AI?

What is the difference between Markov networks and Bayesian networks?

Ans: While both networks comprise nodes and edges, they are very different in their functioning. A Markov network is undirected and could be acyclic, while a Bayesian network is directed and acyclic.

What do Bayesian networks predict?

Ans: The sole purpose of using Bayesian networks to make probabilistic models in artificial intelligence. Such models involve many variables that are dependent on each other. Due to this, finding the probability of an event becomes difficult. Bayesian networks make the task easier as they help find the joint and conditional probability between two events effectively.

Why are Bayesian networks acyclic?

Ans: Bayesian networks need to be acyclic in order to make sure that their underlying probability distribution is normalized to 1.