The Impact of COVID-19 on the Silicon Valley Job Market

Is the Silicon Valley job market a good place to find work? The pandemic has transformed the societal fabric. Even Silicon Valley – known for its elite tech networks, has taken a hit. Considerable research, including one from Brookings, suggests that Silicon Valley, known to attract the best talent from every corner of the world, is losing ground to remote work. So, is it hard to get a job in Silicon Valley? How is the job market in Bay Area? Let’s find out.

This blog post shares the principal insights from Brookings’ analysis of the Silicon Valley job market and the opinion of thought leaders in the tech industry.

How does the geographical shift affect the developer community?

As organizations become more competent at establishing remote operations, the quantity and diversity of the talent pool expand rapidly. For years, major tech firms have tried to make their workforces more diverse and inclusive. Yet, the number of Black or Latinx technical staff at Apple, Facebook, Google, and Microsoft has climbed by less than a percentage point since 2014—a problem that’s come to light in recent weeks.

COVID-19’s consequences may change that. Companies will be able to develop more diverse teams as they begin to hire remote developers based on talent rather than location or pedigree. Companies must, however, take genuine initiatives to build inclusive cultures for this to work. 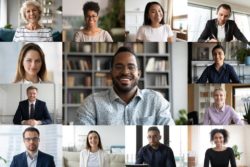 Remote work is beneficial for both developers and employers.

Large tech companies headquartered in Silicon Valley quickly adapted to the virtual environment suitable for remote work. While the pandemic did cause layoffs, it also opened new job markets for developers. With the geographic location and the tedious visa process becoming irrelevant due to remote-first practices, most companies started hiring worldwide.

Remote work is beneficial for both software developers and employers. Remote work guarantees flexibility and work-life balance for developers and helps organizations access a larger talent pool for half the price.

The Bay area has historically been the hub for some of the most prolific personalities in the tech industry. Post-pandemic that is changing. The pandemic has been a catalyst for normalizing remote work. It won’t surprise anyone if the next generation of leaders comes from Brazil, Nigeria, Poland, or even Ukraine.

Since the pandemic, hiring for remote and hybrid jobs has increased. Posting for tech jobs in the superstar cities like LA, Silicon Valley, Boston, and New York has declined. In cities like Atlanta, Denver, St.Louis, Dallas, and Kansas, such postings have increased.

According to Mark Muro, who performed the analysis for Brookings, the rise of these new digital hubs and job markets isn’t apocalyptic for America’s superstar cities or the tech companies and workers who live there. The analysis is from the first full-year data in a trend that is only getting started. He adds that data in 2022 and beyond should reveal an even greater movement in employment from what have previously been dominant locations for tech, especially when many tech companies, such as Oracle and Tesla, transfer staff due to shifting their headquarters out of the Bay Area.

The job market future: Is Silicon Valley still a good place to work?

The word “silicon” in Silicon Valley refers to the material used in microchips. Fairchild Semiconductor in Santa Clara, California, manufactured the first commercially available integrated circuit in 1961. The PC revolution, followed by the internet, spawned today’s tech behemoths, primarily in and around the Bay Area and Seattle.

However, with the outsourcing of electronics manufacturing and the rise of cloud services, a digital company can start from anywhere. The dispersion of the information needed to develop enterprises and the dramatic decrease in the cost of launching a digital startup are hallmarks of what historians refer to as a “mature” collection of technologies. These technologies haven’t stopped evolving; instead, the rate of discoveries has slowed to the point where companies, distant from where they were, can now participate in their development.

The “fourth industrial revolution,” according to certain historians and economists, is currently underway. If that’s the case, Dr. O’Mara believes it’ll be similar to previous industrial revolutions in some aspects. From England’s 18th-century Industrial Revolution to the rise of Detroit, history is full of new technologies that began in one place, made those who lived there wealthy and eventually became global phenomena, leading to specialized hubs of knowledge and production worldwide.

While it’s hard to replicate the Bay Area’s recipe and create the “next Silicon Valley,” regional tech hubs can thrive by carving out their niches.

To know more, head over to our hire developers page!

Article Name
Silicon Valley Job Market: The Impact of Covid-19 on Hiring
Description
Is the Silicon Valley job market still a good place to find work? Read the blog to find out how the pandemic has impacted the hiring process in Silicon Valley.
Author
Vikas Dixith
Vikas Dixith
Vikas is passionate about technology, philosophy, storytelling, and sports. When he is not playing football, you can find him listening to music and podcasts.
Related Blog Posts
Comments