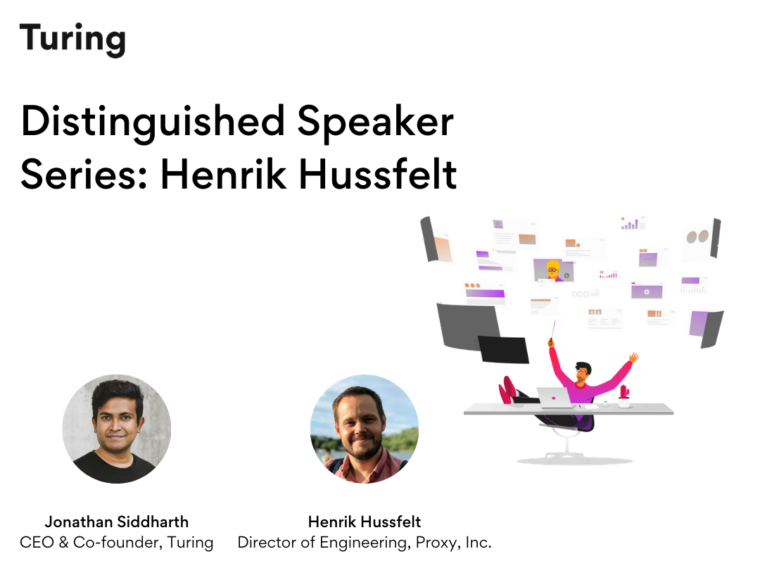 Turing’s Distinguished Speaker Series brings together engineering managers and remote work experts to discuss effective engineering leadership strategies and the secrets behind managing talented, distributed teams. In the latest episode, Jonathan Siddharth, Turing CEO and Co-Founder, hosts an insightful chat with Henrik Hussfelt, Director of Engineering at Proxy. Proxy is a fast-growing startup that provides digital identities for the physical world and was named to Forbes’ list of the Next Billion-Dollar Companies.

Here are three key takeaways from the conversation:

Hiring for personality fit is a crucial strategy

When recruiting candidates for his distributed engineering team, Henrik explained: “I almost always recruit on personality. It has to be a personality match with the team members that I already have.” According to Henrik, finding the perfect addition to your team isn’t about looking for a candidate’s specific traits. It’s about assessing whether these personality traits will gel with the rest of the team.

“To create a successful team, you need different types of personalities within your team to work together collaboratively,” Henrik said.

Jonathan likened recruiting the right engineers to solving a puzzle. Making the right hire is no different than finding the right piece to complete your puzzle, Jonathan said.

Transparency is the key to success

A vital element of a great engineering culture, according to Henrik, is transparency. Henrik emphasized that it’s vital to be transparent about company documentation, team responsibilities, and dependencies. Transparency can help not only when onboarding new team members but also in ensuring a healthy exchange of information between existing teams. Henrik offered GitLab as an example of an organization with a very transparent and open onboarding process. (See Turing’s blog on GitLab’s secrets of running high-performance remote teams).

Henrik advised team leaders to encourage openness. “You want to set up a culture where it’s okay to ask any question.”

Transparency is a two-way street, Henrik explained,  both managers and employees must commit to it. Team leaders should clearly outline the goals and objectives behind the team’s tasks, while employees should be encouraged to express their thoughts on said tasks, Henrik added.

Personal interactions are all the more essential for remote teams

A key difference between remote and non-remote work, Henrik said, is how team members interact. “Personal interactions are crucial in a distributed environment, more so than in a physical one,” he noted. In physical office environments, you can have regular face-to-face communication with team members, Henrik explained. Whereas, in remote environments, you have to pointedly seek out opportunities to have virtual face-time with your employees, he added.

Henrik said it can be difficult for team members to pick up on subtle signals in distributed environments. He stressed the importance of organically engaging with team members, citing one-on-one meetings as an effective way of doing so. Such interactions can help team leaders pinpoint an employee’s needs, requirements, and bottlenecks, he added.

To see the full conversation, check out Turing’s YouTube channel. Let us know your thoughts about the conversation in the comment section. You can also suggest speakers you’d like to see on future episodes of the Turing Distinguished Speaker Series.