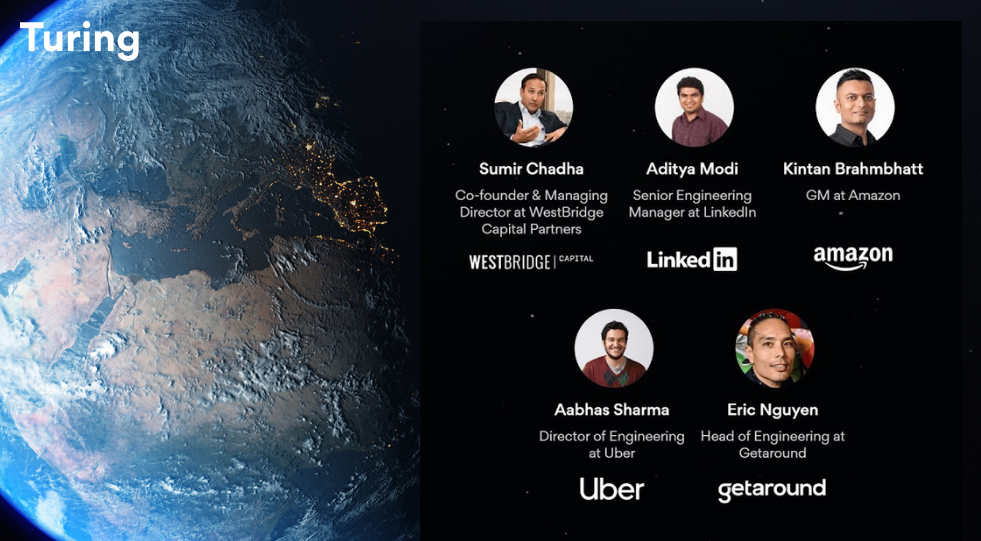 What Does Remote Look Like for the Enterprise, Post-Pandemic? Leaders from Amazon, LinkedIn, and Postmates Share Their Expertise

Helping employees avoid meeting fatigue, the importance of onboarding, and the need for diversity were among the recommendations shared by engineering leaders from Amazon, LinkedIn, and Postmates/Uber at Turing’s Boundaryless: #ScalingPostPandemic conference, which took place on May 13, 2021.

“What Does Remote Look Like for the Enterprise Post-Pandemic?” was the second session of the thought-provoking conference that Turing sponsors and holds quarterly to help engineering leaders from fast-scaling startups and enterprises meet the challenges of managing remote software development teams.

He recommended managers be mindful of the number of meetings they schedule. He suggested consolidating meetings and inviting only those team members who would find the discussion relevant. He also cautioned against back-to-back meetings and instead recommended having frequent breaks between them.

Agreeing, Aabhas Sharma, Director of Engineering, Postmates/Uber, revealed that his team has a similar approach: it sets meeting hours that work for all time zones, allowing employees to have flexible schedules outside of those hours to avoid fatigue.

Self-onboarding is a critical investment

Sumir sought the panel’s advice on managing remote teams for the first time. In response, the experts stressed the importance of smooth onboarding for newly remote teams.

Aabhas introduced the concept of self-onboarding. He pointed out that synchronous onboarding sessions can be difficult for teammates located in different time zones. Instead, managers should equip new hires with the resources to onboard themselves, he added. “Self-onboarding resources were a critical investment for the Postmates team,” he mentioned.

Kintan, too, said he preferred thorough document-sharing to one-on-one onboarding meetings and shadowing. “Increased documentation makes it easier for new employees to understand the rhythm of the organization,” he explained. “The right support and mentorship structure can also be crucial,” he added.

Diversity is a crucial feature of remote teams

Sumir asked leaders about the importance of diversity in remote teams. Aditya said, “Remote work helps companies access a bigger pool of talent, which organically creates diversity.” This has worked well in LinkedIn’s interest, he added.

Kintan commented that remote work is inclusive of different races and ethnicities and different personality types. “Hiring remotely instead of locally has helped bring forth newer perspectives and diversity of thought,” he explained.

Eric Nguyen, Head of Engineering, Getaround, revealed that affinity groups—groups of people from similar backgrounds and their allies—have become an important social space for employees at his company. Himself a member of affinity groups like Asian Americans and Pacific Islanders, Eric added that such groups have helped support many meaningful conversations.

The group of leaders also discussed everything from hiring strategies for the hybrid world to the importance of proactive communication. Watch the entire conversation here.

Head here to watch a recording of the Boundaryless: #ScalingPostPandemic Conference.