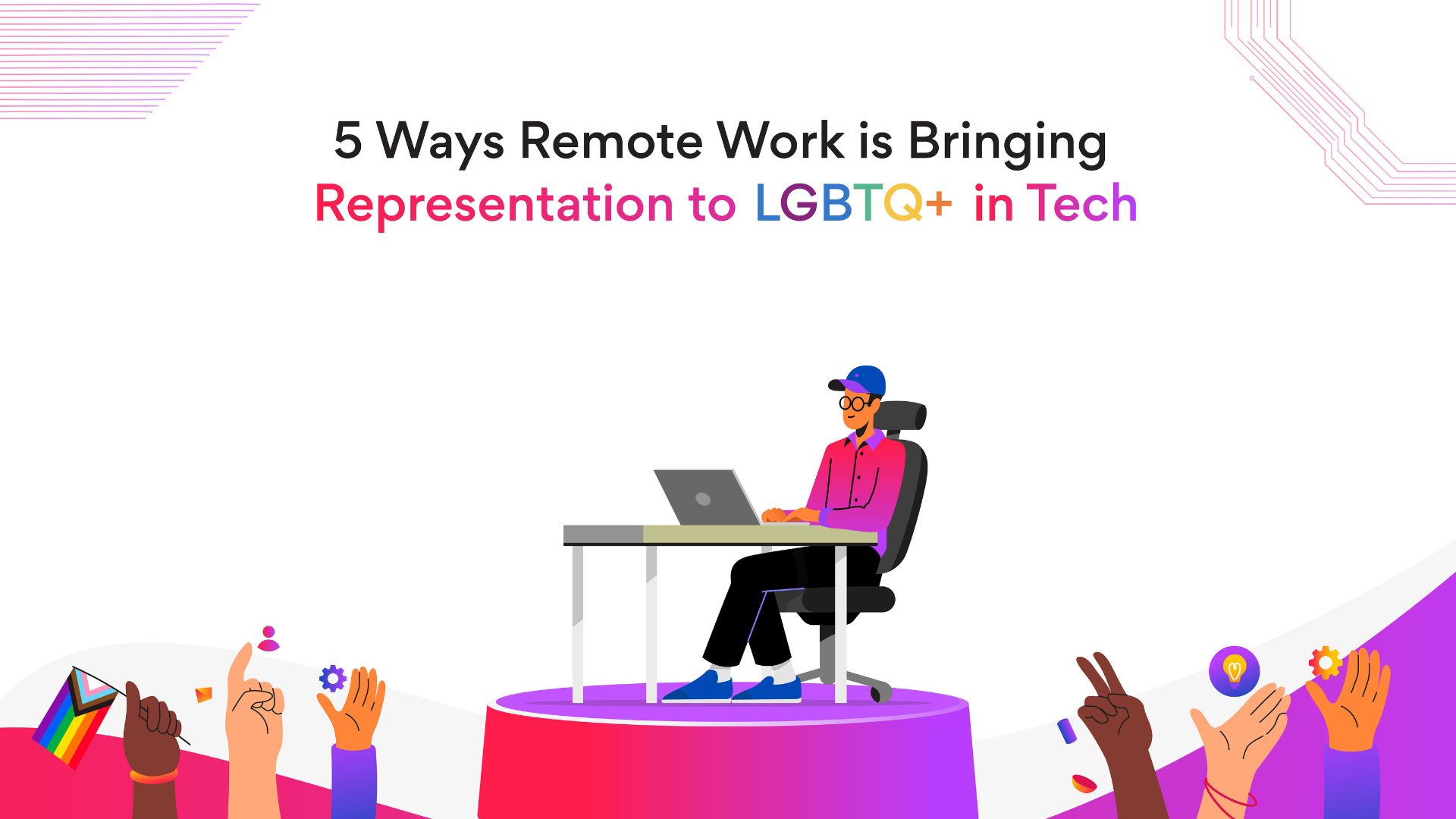 5 Ways Remote Work is Bringing Representation to LGBTQ+ in Tech 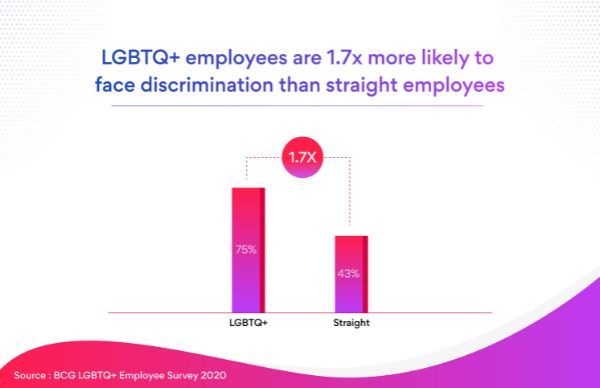 LGBTQ+ in tech: Discrimination against LGBTQ+

Despite modern challenges, the LGBTQ+ community has a long history of significant contributions to the tech industry’s growth. Alan Turing, Tim Cook, Leanne Pittsford, Peter Arvai, Hayley Sudbury, Jon Hall, and Megan Smith are just a few names in a long list of tech leaders who have spotlighted the LGBTQ+ community with their contributions to the world.

Many of these leaders openly declared their sexual orientation so that they could be role models for the younger generation of the LGBTQ+ community. They understood that publicly announcing their identity would invite new challenges into their lives. However, they persevered to create a safer and more accepting space for their community.

Many tech companies are now employing ways to show their solidarity with the LGBTQ+ community. Tech giants like Apple, Microsoft, and Adobe support different initiatives for the LGBTQ+ community such as Employee Resource Groups (ERGs), and are committed to its upliftment.

Turing and Turing Community echo that sentiment and believe in providing a safe platform for growth and expression to every individual without any disparity. We understand that representation and elevation of the LGBTQ+ community provide a foundation for its members to make meaningful career strides.

In support of that foundation and the LGBTQ+ community, Turing Community will celebrate the month of June with its signature event, #PrideAtTuring. This two-day, interactive virtual event will help developers build a sense of belonging with an open community. Take a moment to learn about this free event happening on June 21 and 22, 2022.

Initiatives by Turing and other companies have become possible because the conversation has shifted these past few years with diversity, equality, accessibility, and more becoming top of mind of tech companies. Here are some of the ways we see that change in the industry.

Two years later, many tech companies have learned to brave the challenges by devising and implementing diversity and inclusion policies and keeping a close watch on harassment and discriminatory behavior against the LGBTQ+ community. Apart from this, many companies are also forming support groups for the LGBTQ+ community.

Remote work is changing the global rubric in this regard. Due to the pandemic, several tech companies have adopted a wholly remote or hybrid work model. Remote work offers two things to members of the LGBTQ+ community working in the tech space. One, even if they stay in a less inclusive place, they can still be involved in meaningful work in an inclusive remote workplace. Two, they can work from wherever they feel comfortable and don’t need to lose the supportive community they have built for themselves.

Rise in inclusion because of remote work

Per a 2021 LinkedIn survey, 24 percent of LGBTQ+ workers kept their identities undisclosed at their workplace, and 26 percent feared their co-workers would treat them differently if they opened up.

However, with remote work, many LGBTQ+ professionals have admitted to feeling secure, having control over their appearance, and not being under pressure to present themselves in a particular way.

In addition, professionals from the LGBTQ+ community have found it easier to share their nonbinary pronouns in the remote onboarding process, email signatures, LinkedIn, and other online profiles. Sharing their pronouns in this way helps them avoid the constant anxiety of having to introduce their pronouns.

Working remotely also helps LGBTQ+ tech professionals to avoid being judged for their appearance because of fewer physical run-ins.

Increase in LGBTQ+ representation because of remote work

In their paper, How Remote Work Can Foster an Inclusive Environment for Transgender Developers, Ford et al. assert that software developers from marginalized communities can have greater control over their identity disclosure and representation and feel more empowered through remote work.

By sharing their trans and nonbinary pronouns through their professional profiles such as LinkedIn, GitHub, and others, professionals from the LGBTQ+ community can find strong support and allies. Also, they can build better connections and professional relationships when they present themselves as they are.

Since LGBTQ+ tech professionals feel more comfortable expressing and sharing their identities in a remote setting, non-LGBTQ+ people also get to know and understand the different sexual identities of people in their workplace and everyday lives.

Recognizing the need for expression of identity for LGBTQ+ professionals at the pandemic’s peak, many tech companies promoted virtual discussions and events to increase allyship within organizations.

Such online discussions and events have helped increase awareness among older employees who have teenage LGBTQ+ children. So, becoming an ally fosters a better understanding of the needs of the LGBTQ+ group overall.

The need for inclusive remote policies

Despite the increased representation of LGBTQ+ employees in remote workplaces, a recent survey, Project Include by LinkedIn, shows that LGBTQ+ community members witnessed a spike in cyberbullying during the pandemic.

This data shows the need for stringent inclusive policies for the online workspace. Employees surveyed by LinkedIn indicated the need for well-defined policies for protecting LGBTQ+ workers from cyberbullying and harassment.

The figure below shows that gender-based harassment and cyberbullying have increased with remote work. 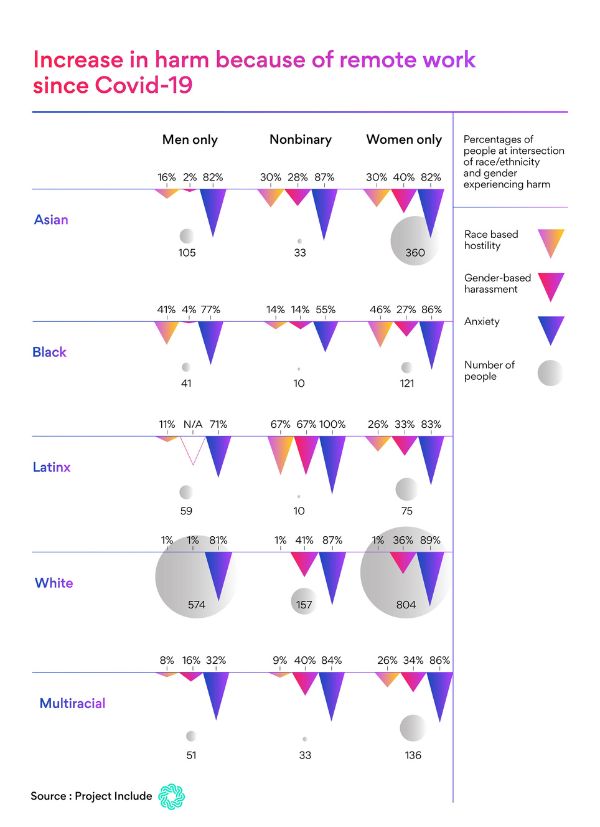 Increase in harm because of remote work

This data means that tech and other companies must institute stringent remote work policies that protect employees from the LGBTQ+ and other marginalized communities against such harm.

Turing leads by example in this sphere as its leaders outline policies protecting employees from discrimination and bullying at the outset. As part of the company’s code of conduct, employees must respect the needs of each other. In addition, Turing leaders proactively conduct regular feedback sessions to know if the employees are feeling safe within the organization or if the behavior of any other employee or group of employees is troubling them.

This proactive approach helps build a culture of trust, penalizes the wrongdoers, and implements corrective action. Moreover, regular checks and balances help contain any harassment or discrimination issues. What results is a place where people want to work as well as invite their peers to work.

What are the leaders at Turing saying about the future of LGBTQ+ in tech?

We Believe in a boundaryless future. Perhaps not surprisingly for a company named after Alan Turing, we support people from the LGBTQ+ community from all over the world and want to help them access the opportunity their talent deserves.

We are so excited to kick off Pride at Turing on June 21-22 to recognize the LGBTQ+ community in tech and elevate their voices and experiences. Turing is committed to diversifying tech by providing spaces for much-needed conversations and expanding opportunities for the LGBTQ+ developer community. So come and belong. Find your dream career, grow your network, and learn technical and professional skills. We are here for you!

I’m positive about the future of the LGBTQ+ community in tech. With organizations like Out in Tech, Lesbians Who Tech, Trans Tech Social, and more, as well as growing employee resource groups at many global tech companies, LGBTQ+ professionals can find resources and potential allies to build a sense of community and safety. I can say that embracing my queer identity at work means showing up fully, wholly as myself, comfortably, and confidently and it helps me be a better leader.

You can see how remote work can be instrumental in increasing allyship for the LGBTQ+ community within professional and non-professional setups. This is especially true with programs and platforms that foster allyship opportunities.

The Turing Community offers LGBTQ+ software developers and engineers a safe and inclusive place to learn new skills and grow their careers.

What to expect at Pride at Turing

Some of the featured event experiences during Pride at Turing are :

How can you join?

It’s simple and free to join Pride at Turing:

That’s all, you’re ready to join the festivities. We’re excited to celebrate and support the LGBTQ+ community with you during Pride at Turing!