Leon is an experienced software developer from Bauru, São Paulo, Brazil, working as a remote software developer with a leading fintech US company. How did Leon land a high-paying US job from Brazil without moving to the US? How does he feel about remote developer job opportunities in Brazil? Let’s find out.

Leon graduated in 2014. After graduating, he started working as a software developer with a local company in Brazil. At the same time, Leon was also working on his startup. Naturally, he had a hectic schedule juggling his job and startup. Leon had to work late nights. Despite this, the financial returns were low.

After working for five years and reaching a software developer burnout stage, Leon decided to take a break. He was looking for an opportunity that could provide him with a work-life balance and good financial stability. Enter Turing!

Turing’s email was a boon for me

As Leon was searching for a career opportunity, he received an email from Turing. “The email came as a boon to me,” he smiles.

After brushing up on his skills, he immediately signed up on the platform and cleared the Turing tests and coding challenge. Leon also adds that knowledge and proficiency in English helped him get hired through Turing.

In no time, Leon got matched with a leading US-based fintech company. “I am building high-value products along with a team of software developers in this company,” he announces proudly. 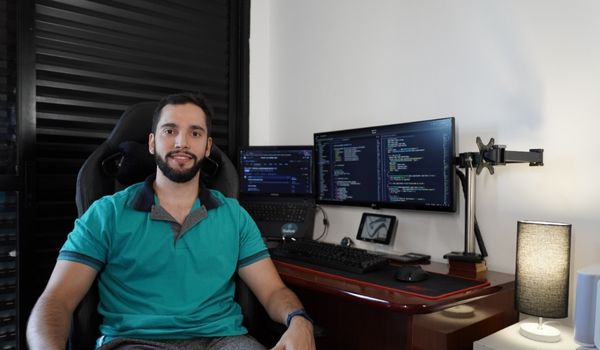 Being from Brazil, Leon says that the two hours time zone gap between US and Brazil makes virtually no change in his daily routine. In fact, he has been able to find more time for himself.

Leon adds that the work environment here is fantastic. Even though it’s a remote job, he has never felt left out of anything happening in the company, which has given him a sense of belonging.

He adds: “The people I’m working with are punctual. I really love that about my job.”

I can spend time with my family, travel, and do much more!

One of the major highlights of Leon’s experience with Turing is that he has achieved an outstanding work-life balance. “ I don’t have to keep working for hours without taking little breaks to rejuvenate,” he elaborates.

Leon gives an example of a particular day when he had to go for a dentist appointment. “I returned from my appointment and could complete my work at my convenience,” he mentions. Leon further adds that he now has much more time to look after his health and exercise properly.

Leon loves riding motorcycles, and he’s really fond of cruiser motorcycles. Earlier, he was not able to go on road trips frequently. But being a Turing developer, he has been able to travel and work from anywhere he wants.

In his leisure time, Leon loves to play video games. He usually spends his time with his friends, family, and fiance.

Turing is the top destination for the best remote developer experience.

Leon says that if he had to describe Turing, he would call it a one-stop destination for the best remote developer experience. “If you want to be part of amazing projects and advance in your software developer career, sign up on Turing today,” he concludes.

Turing brings you the top remote software developer jobs right at your fingertips. Get hired by top US companies without needing to move to the US.

What are you waiting for? Head over to Turing’s Apply for Jobs page to know more.

Article Name
Turing Jobs: Remote Software Developer Builds a Dream Career
Description
Leon is a remote software developer with Turing. Read here to know how he landed his high-paying dream remote developer job with a US-based company.
Author
Ritvik Gupta
Ritvik Gupta
Ritvik is a copywriter and content writer who has worked with fast-scaling startups such as GoMechanic and Pitstop. He runs his own automotive blog as well.
Related Blog Posts
Comments