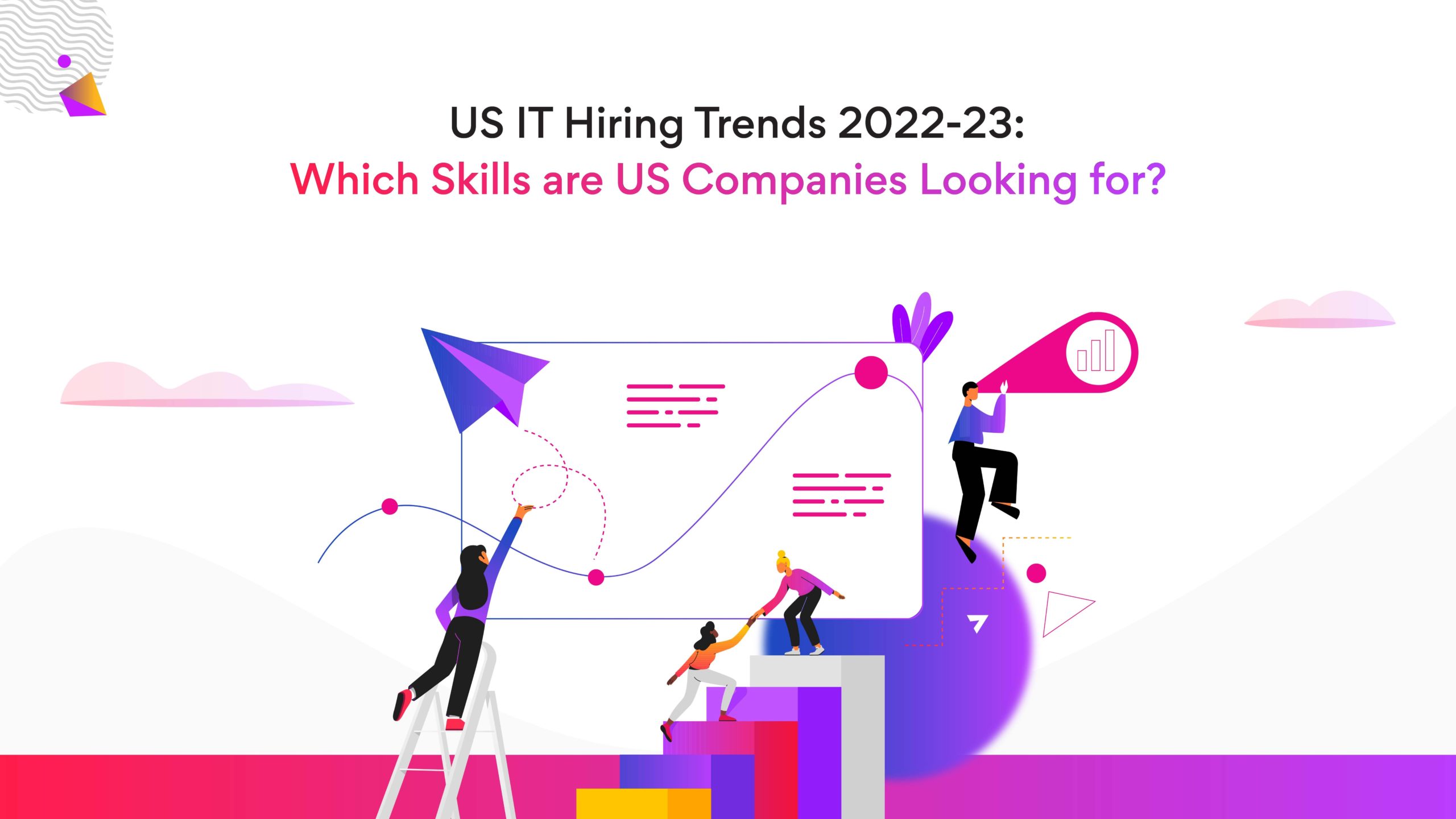 The USA is the largest tech market in the world with a 33 percent market share.

Employment in the IT sector in the US is also strong, as tech jobs are predicted to grow at a rate double that of the country’s overall employment rate. In addition, the custom software development services sector is expected to create 4.8 times more jobs by 2025.

Web development, data analysis, artificial intelligence, cloud computing, blockchain, and advanced programming are fueling this technical revolution. However, have you wondered, which programming languages and tech skills are needed to work on these technologies?

Turing also examined the need for various software talents among its clients, which include big corporations and fast-growing startups, and discovered some intriguing things about current IT hiring trends in the USA.

React.js is the most in-demand programming skill

React.js is the programming skill that American businesses perceive to be the most useful for front-end development, accounting for 20 percent of all jobs and 14 percent of the top 50 programming skills. Since publishing the first Turing report in 2020, React has maintained its first position on the list.

React is a front-end JavaScript toolkit. It is free and open-source for creating user interfaces based on UI components. Meta (former Facebook) maintains React along with independent programmers and developer communities.

React’s popularity among leading software organizations has also been influenced by the ability of businesses to produce apps with improved UI, UX, and speed.

Companies are frequently looking for developers who have experience with React as well as other common skill sets. The most asked languages and skills with React are Node.js, Typescript, JavaScript, Python, CSS, AWS, HTML, React Native, Redux, and PostgreSQL.

Python is the most in-demand programming language

Python’s popularity has reached an all-time high, surpassing Java, C#, and even JavaScript on the Turing job index. It’s also important to note that 30 percent of developers wish to learn the language, making it the most desired language for the third consecutive year.

Due to the language’s capabilities, engineering teams wishing to power their digital infrastructures extensively use Python.

Node.js is the most loved web framework for application development

With a 52 percent share, Node.js maintains its position as the top web framework for creating web applications. Also, with over 90,000 stars, Node.js is the second most loved technology on Github.

Moving up a rank, JavaScript has become the fourth most desired programming skill

One of the most popular languages in the world, JavaScript is used in 97 percent of websites worldwide. There are more than 1.7 billion websites globally, therefore JavaScript has a very broad use and audience.

Adding to the fact that JavaScript is incredibly flexible and feature-rich, JavaScript developers are in high demand.

AWS has gained more popularity in IT hiring in the USA

Since the publication of our previous study, AWS utilization has increased; it now accounts for 10 percent of the top 50 skill requirements, up from 6.3 percent.

Now, AWS makes up nearly half of all DevOps requirements in the top 50, making it by far the most in-demand DevOps ability.

It’s not surprising that AWS is so popular on the IT hiring trends chart given that it provides strong security and is affordable, easy to grow, and customizable.

Companies frequently look for software professionals who have a trifecta of talents, such as AWS, React, and Python, or AWS, React, and Node. Turing customers prefer AWS developers with skills in Google Cloud Platform, Docker, Python, React, Node.js, SQL, JavaScript, Typescript, and Java.

What skills are paired frequently with the top 10 skills?

Turing customers frequently ask for developers who are proficient with more than one development skill. Here is a list of the top 10 skills:

IT Hiring Trends: Other skills that are frequently paired and requested with the top 10 skills

Most in-demand skills for back-end development

They also ask for skills like MySQL, MongoDB, Oracle, and SQL, as back-end developers create, read, update or delete data and serve it back to the client-side or the front-end of the application.

Most in-demand skills for front-end development

Every company uses one or multiple databases to store and organize information. The information that the companies store can be very sensitive, so they must be careful while accessing or manipulating the information in the database.

According to a recent study, the global DevOps market size is expected to reach $12.85 billion by the year 2025, with a CAGR of 18.60 percent. Clearly, DevOps engineers are in high demand.

The global app economy is projected to generate $21 trillion; a clear signal of how the app industry is booming.

To handle this demand, companies are looking for candidates who have expertise in programming languages and skills, including Android, React Native, Swift, and Flutter. They are also hiring mobile developers who have a good understanding of UI/UX design.

What are some other in-demand skills on the IT hiring chart for US companies?

Along with the above-mentioned programming languages and technologies, TypeScript, SQL, Java, REST, CSS, React Native, HTML, PostgreSQL, Go, Kubernetes, Ruby on Rails, Docker, and C# are also rising on the IT hiring chart in the US.

So, if you are looking for a career switch or just trying to learn something new, you can’t go wrong with these programming languages and skills.

Are you looking for a high-paying, remote software job?

Talented developers can find long-term, full-time US remote software employment at Turing across 100+ skills, in various roles, including Full Stack, Front-End, Back-End, DevOps, Mobile, and AI/ML. Check out the Apply for Jobs page for more information!