Regardless of XGBoost having a unique name, it is actually not hard to understand as long as we go through a few concepts around it. Terms like decision trees, learning algorithms, gradient boosting, and a few more, may sound futuristic. Let’s walk you through the basics of XGBoost and a few of the related terms and then we’ll understand the process of implementing it in data science.

Apart from that, XGBoost is one of the leading techniques used in Kaggle competitions because of its prediction ability and also because it is developer friendly.

It is important to understand the algorithms and machine learning concepts that XGBoost deals with. These are a few areas where implementing XGBoost saves time and improves the code efficiency.

Let’s walk you through these aspects in detail.

Gradient boosting, as the name suggests, is a boosting algorithm. It eliminates the errors and improves the performance of the model. 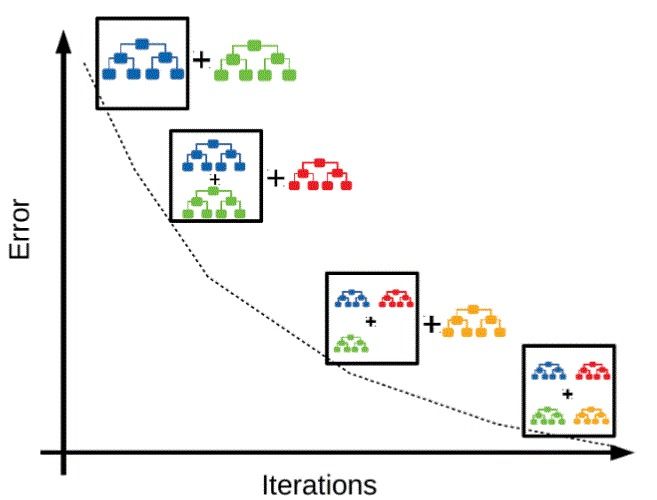 A decision tree is a type of supervised machine learning model wherein the data is continuously split according to the conditions. It is used as a tree-like model for multiple decisions. These trees can be used to map out an algorithm that predicts the best choice and can also be used to drive informal discussions.

A decision tree starts with a single code that further branches into possible outcomes. Each outcome leads to additional nodes that branch into more possibilities. This entire procedure gives it a tree-like shape and it is similar to a controlled fission reaction. 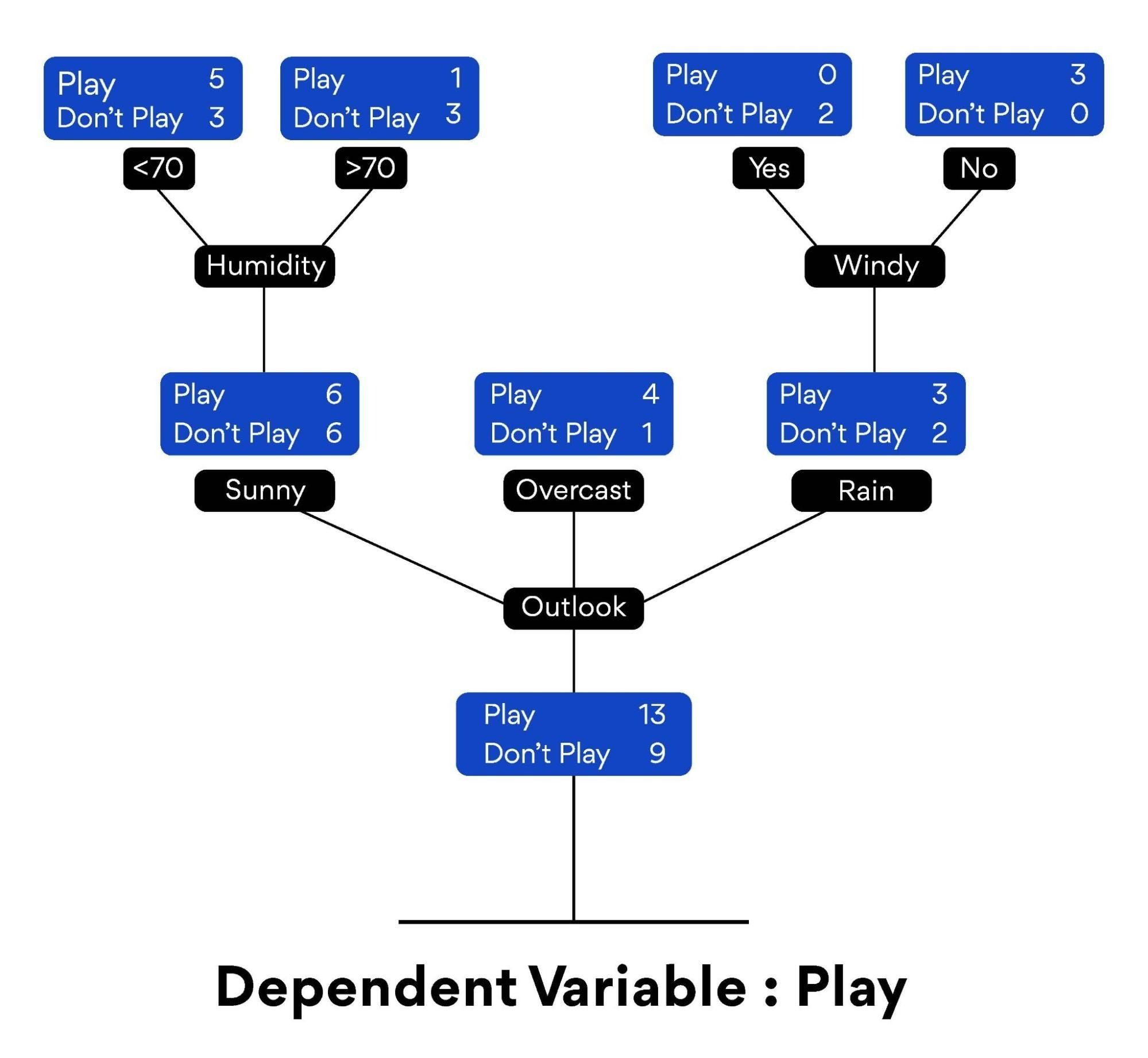 There are different types of nodes. 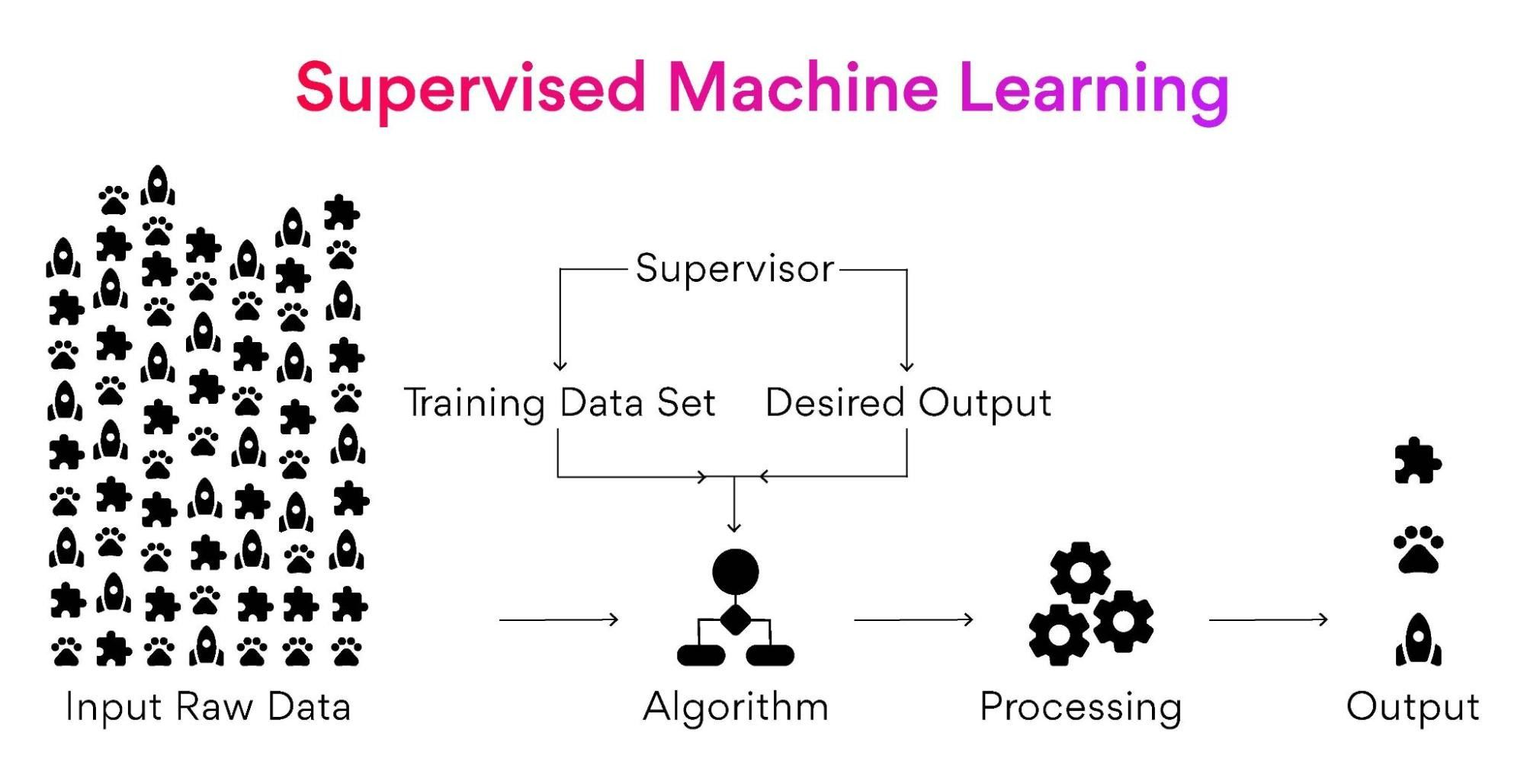 The main aim behind this type of machine learning is to find a mapping function to map the input variable (x) with that of the output variable (y).

Ensemble learning is a process by which multiple models including classifiers and regressors are strategically created and combined to solve a computational problem. This type of learning is used to improve the parameters of model performance such as prediction, function approximation, and classification.

Ensemble learning is a meta approach to machine learning for better predictive model performance. It combines the predictions from multiple models for better outcomes.

There are three main classes of ensemble learning:

Bagging is a class that fits several decision trees of the same data sets on different samples. It also streamlines the prediction averages.

Stacking deals with fitting several different learning models on the same data while using another learning model to combine the predictions in the best way possible.

After having an idea about gradient boosting, machine learning models, decision trees, and learning algorithms, implementing XGBoost will be easy to understand. XGBoost was designed for optimal speed and model performance. In this, a hyper-parameter is set before the learning process begins and directly affects the model’s performance.

What is a hyperparameter?

This leads to a question: What are the important hyperparameters and which one to choose when implementing XGBoost? How to use these hyperparameters?

Here are a few Hyperparameters associated with XGBoost. 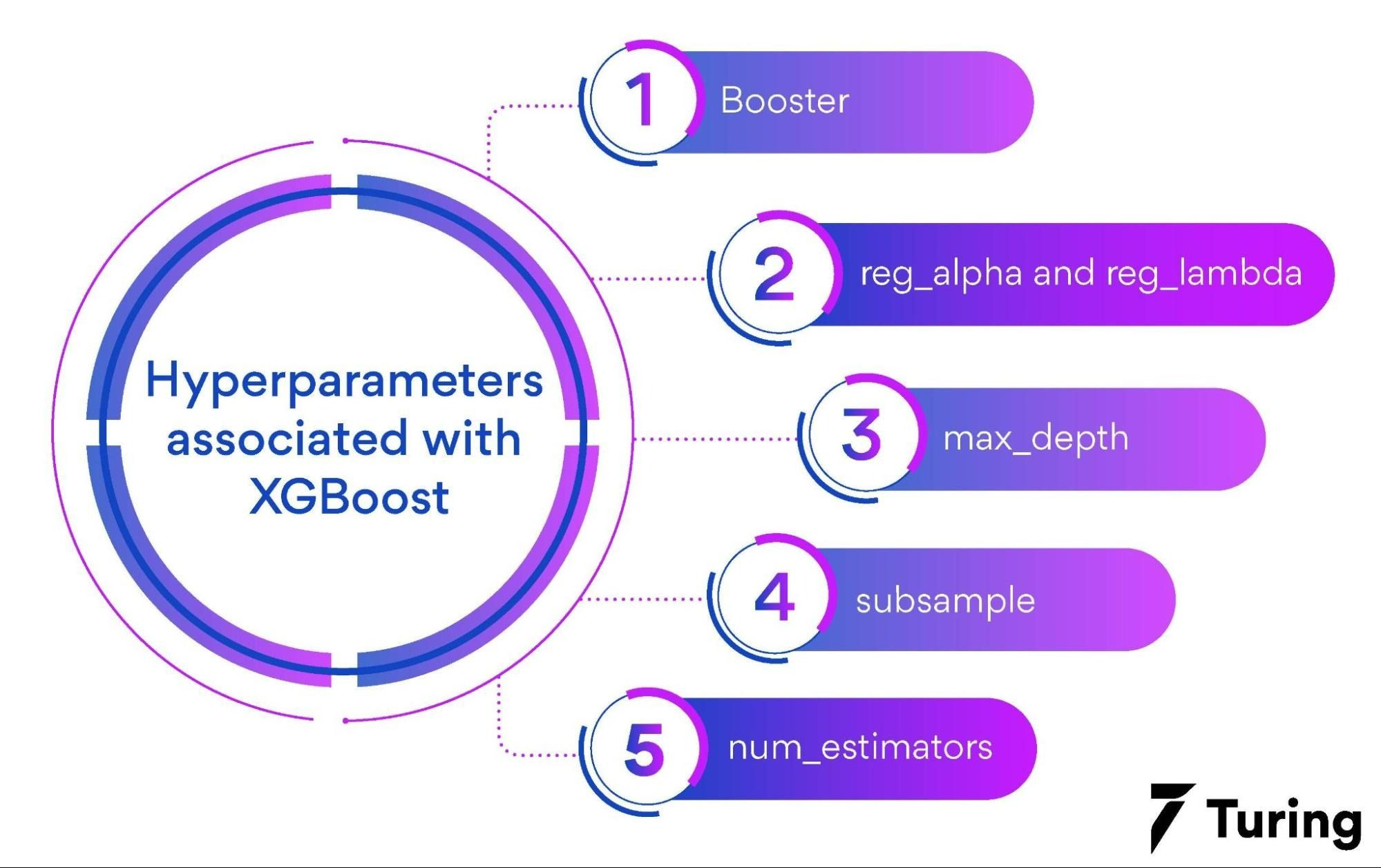 Let’s understand these hyperparameters one by one.

Booster is a boosting algorithm and you have three options here:

- Dart: Dart is very much similar to gbtree and avoids overfitting by using the dropout techniques.

- Gbtree: Gbtree is the option by default and the gradient descent of the tree type. It will raise a penalty for facing any complexity.

reg_alpha is an L1 and reg_lambda is an L2 term. With the increase of these numbers, the model becomes more conservative. The recommended values lie between 0-1000 for both the terms.

subsample is the size of the sample ratio that is used while training the predictors. The default value is 1 and with this value, we can use the entire data set. If this value is set to 0.7 then 70% of the observations are randomly sampled and can be used in each boosting loop. A subsample always prevents overfitting.

To understand how XGBoost works and all about implementing it, let’s take a simple example to predict the exact number of ‘Titanic Survivors’ on a Kaggle competition.

First, download the data from Kaggle. We will need to import training data and important libraries.

In the above example, we need to note the import code ‘from xgboost import XGBClassifier’. For the code to run, we need to install XGBoost on our system by running ‘pip install xgboost’ from the terminal.

‘XGBClassifier’ is used here as we have considered a classification problem. We need to use ‘XGBRegressor’ for regression problems. The other libraries used, in the above example, process the data and help in calculating the metrics associated with model performance.

We have several variables in our data and we will use the same from our previous example. We have considered the two variables: ‘age’ and ‘sex’

The first two lines of our code are used to create dummy variables from ‘sex’. This is necessary to convert the ‘sex’ variable from string to integers. These dummy variables turn into two different variables ‘male’ and ‘female’. These new variables are equal to 0 or 1 depending on the ‘sex’ of the passenger traveling on Titanic.

The test sets are used to measure our XGBoost model performance.

Train sets are used to create our XGBoost model. 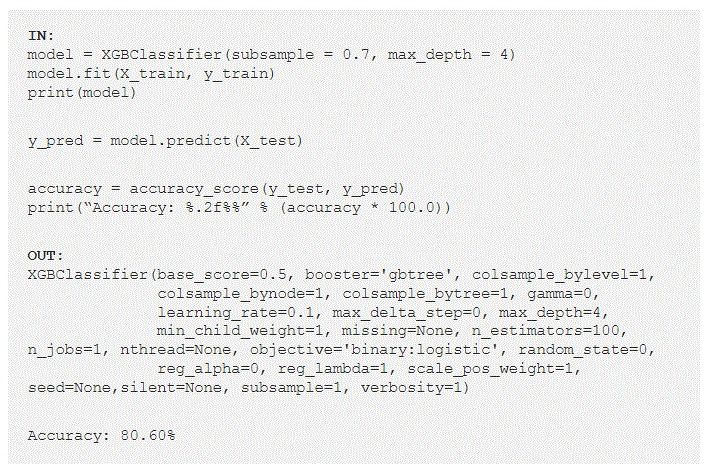 We train our XGBoost model in the first two lines of our code. It should be noted that the subsample is equal to 0.7 and the maximum_depth is equal to 4. This is where we define our hyperparameters. We can see the model performance with an accuracy of 80.6% in the test set. Let’s understand how to apply the same to the new data.

In this above code fragment, we have performed a few functions.

XGBoost is scalable in memory-limited and distributed settings too. Its efficiency to optimize with the learning algorithm makes it scalable. Here are a few features of XGBoost that make it an important element in the data science field.

Finding the best split over a continuous feature is a hassle and to achieve this, the data needs to be stored and fitted entirely into the memory. This becomes an issue in the case of large datasets.

Data sorting can be time-consuming, especially with decision trees and learning algorithms. The data is stored in the memory units called ‘blocks’ to cut down the sorting costs and also to save time. Every block has data columns that are sorted according to the feature values. Such a computation is quite sensitive and can be done only once before the training.

Block sorting can be divided between parallel threads and can be done independently with the CPU. The split finding process can be done simultaneously as the statistics of each column are collected together with the block sorting.

The weighted quantile sketch is used to streamline the candidate split points and weighted datasets. This technique is used to merge the operations on quantile summaries over data.

Some reasons such as missing values, zero entries, and one-hot encoding, scatter the input. XGBoost leverages its sparsity-aware algorithm to identify and visit the default direction in each node for a better input retrieval.

For the data that does not fit into the main memory, XGBoost divides the data into multiple blocks and stores each memory block on the system. You can also compress blocks and decompress them on the go using an independent thread.

The regularization term reduces the complexity of the model.

In the above formula, Ω is the regularization term that has to be included in the objective functions. XGBoost includes regularization and controls the complexity of the model. Regularization learning prevents overfitting.

These 6 features described above, may present in some algorithms individually, but XGBoost combines these techniques to have an end-to-end system that improves scalability and also implements effective resource utilization.

XGBoost offers a wide list of attributes and benefits.

Although XGBoost works great with machine learning models and different learning algorithms, you should not use it as a silver bullet. For better results, you should combine feature engineering and data exploration in the field of data science. We hope this article has helped you with understanding XGBoost implementation.

Which algorithm is used in XGBoost?

How does XGBoost work towards data science?

Extreme Gradient Boosting (XGBoost) is an open-source library that follows the optimized distributed gradient boosting methodology in machine learning models and learning algorithms that are optimized for modern data science problems. It streamlines the optimum utilization of the techniques associated with boosting.

The plethora of roles under the data science umbrella baffles and confuses people into applying for a data science that's not suited for them. Learn all about different data science roles to target the suitable job role...

With exponential growth over the past years, the data science field has become very popular in the IT sector...